Tensions are building ahead of presidential and legislative elections this month in Central African Republic, amid friction between rival candidates and increasing violence by armed groups that still control much of the country despite a peace agreement signed almost two years ago.

Among the candidates who have applied to stand for president on 27 December is former leader François Bozizé, who returned to CAR in late 2019 after six years in exile following his ouster by rebels.

Supporters of the incumbent president, Faustin-Archange Touadéra, claim Bozizé, who is under UN sanctions, cannot stand because he didn’t spend 12 consecutive months in the country prior to submitting his application to run, as is required by law. Bozizé’s team claim he entered CAR via neighbouring Cameroon before the deadline.

CAR’s constitutional court is expected to announce a list of approved candidates on either 2 or 3 December. Many expect protests should it rule against 74-year-old Bozizé, who remains popular among some Central Africans and is considered a threat to Touadéra’s chance of a second term.

This month’s ballot will be the second since widespread conflict broke out in 2013 when the mostly Muslim Séléka rebel alliance that overthrew Bozizé fought the mostly Christian and animist anti-Balaka milita, which the ex-president is accused of helping create.

Groups that made up the anti-Balaka and the Séléka – whose former leader, Michel Djotodia, also returned to CAR last year after a lengthy exile – have since splintered into multiple, smaller factions – 14 of which signed a peace deal with the government in Sudan’s capital, Khartoum, in February 2019.

But serious abuses against civilians by the rebel groups – which also regularly fight each other – have continued across the country, and one in four people remain either internally displaced or living as refugees in neighbouring states.

Several opposition candidates are now tapping into popular discontent with the peace deal, which awarded rebel leaders positions in government – and access to various other perks – despite well-documented war crimes committed by their forces.

“The [peace] deal has not had the expected impact,” said Hans De Marie Heungoup, a Central Africa analyst at the International Crisis Group. “Twenty-two months after the signature of the agreement, [violence] is at a level similar to what it was before.”

What’s behind the electoral tensions?

Touadéra initially wanted to delay the polls on account of the coronavirus pandemic, but his plan triggered opposition resistance and was eventually scuppered in June by CAR’s constitutional court.

Armed group violence hindered voter registration operations in some parts of the country, while further delays in the process mean roughly 200,000 voting-age refugees will be unable to participate later this month. 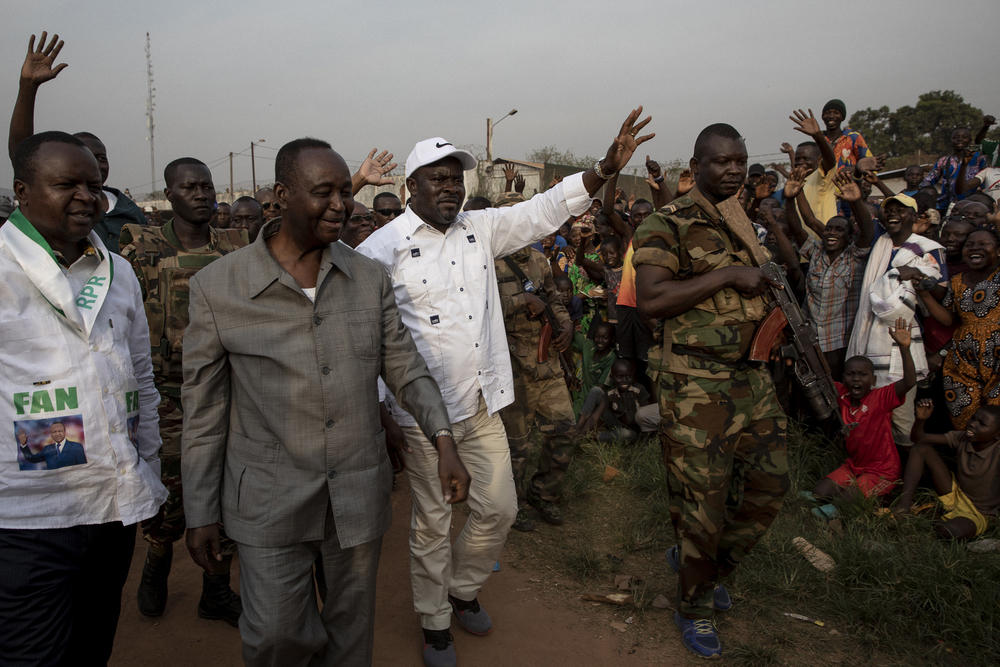 Adrienne Surprenant/TNH
Members of the political opposition greet supporters ahead of this month’s presidential election, which takes place amid friction between rival candidates and ongoing clashes between rebel groups.

On 27 November, the constitutional court invalidated 78 candidates who had applied to stand in legislative elections. Among those disqualified were members of armed groups, who would have enjoyed parliamentary immunity should they have won seats. In a statement on 29 November, some groups claimed their exclusion went against the spirit of the peace agreement.

Attention now turns to the constitutional court’s verdict on Bozizé, who also faces an international arrest warrant issued by the CAR authorities for crimes against humanity and incitement to genocide.

Tensions are already high. Bozizé’s party, the KNK, claims its members were attacked during a meeting last month, while a separate skirmish broke out on 21 November between the ex-president’s security detail and soldiers from the presidential guard.

Sébastien Wénézoui, a special advisor to Touadéra, told TNH he is arranging a meeting between the former and current presidents to try to resolve issues, but expressed concern over “uprisings and outbreaks of violence” among Bozizé’s supporters.

Another presidential candidate, Anicet-Georges Dologuélé, who has formed an opposition coalition known as COD-2020 that includes Bozizé and other hopefuls, said the president’s supporters are spreading “talk about Bozizé hiding and preparing to attack” to delegitimise his opponent.

Rival international powers, meanwhile, are hoping for different outcomes in the election, according to an October report by The Sentry, a Washington-based NGO that investigates corruption.

Touadéra is allied to Russia and to the Wagner Group, a mercenary organisation linked to President Vladimir Putin, while France, CAR’s former colonial ruler, is hoping a change in power in Bangui will help restore its waning influence in the country.

French and Russian networks have both built links to rebel groups to further their objectives, according to The Sentry, though the French foreign ministry said the accusation was “completely unfounded”.

“The French-Russian rivalries aim to bring the Central African Republic under tutelage, to make this country a zone of geostrategic influence,” Nathalia Dukhan, a senior investigator at The Sentry, told TNH. 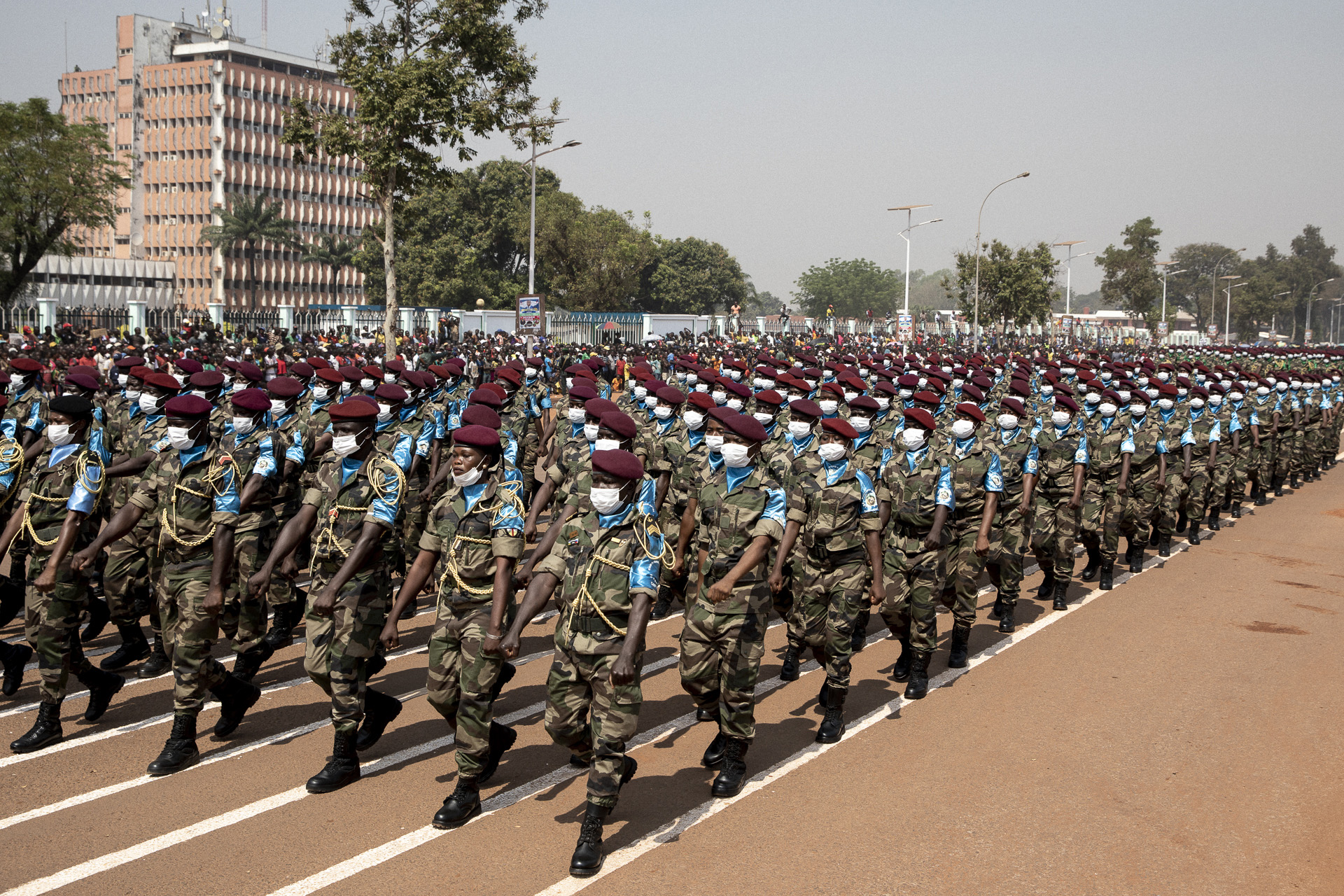 What has changed since the peace deal?

Government officials, police officers, and soldiers – most of whom withdrew from their posts as rebel groups extended their authority from 2013 onwards – have been slowly returning to locations across CAR.

A criminal court set up in Bangui to investigate grave human rights violations, handed down its first ever conviction for crimes against humanity following the trial of several anti-Balaka militiamen in February.

And in February 2021, the International Criminal Court in the Hague will begin a trial of the anti-Balaka leaders, Alfred Yekatom and Patrice-Edouard Ngaïssona, who are accused of war crimes and crimes against humanity.

But impunity largely persists for armed groups, which continue to fight each other, traffic weapons, and expand territory even as their leaders enjoy government posts and political legitimacy through the peace accord.

“The Khartoum deal has attributed a political and economic legitimacy to representatives of criminal groups,” said Dukhan of The Sentry.

From July 2019 to June 2020, the UN documented 880 incidents of abuse affecting civilians – the vast majority by rebel groups – and more than 190 cases of conflict-related killings.

In northwestern CAR, a rebel group called 3R has launched a series of attacks, displacing thousands of people over the past year. The UN’s peacekeeping mission, MINUSCA, launched its latest military operations against the group in June. The following month, one of its peacekeepers was killed in an ambush, and one of its vehicles struck a landmine.

3R’s spokesperson, General Sywo, denied it laid the mine in an interview with TNH, and said the UN’s operations have not impacted the group. MINUSCA’s spokesperson, Vladimir Monteiro, said that its military operations continue and conceded that “problems persist” in 3R territory.

In the northeast, several armed groups that once made up the Séléka coalition have clashed throughout 2020, with civilians often the target. A recent report by the UN’s Panel of Experts on CAR stated that competition over territory, taxation opportunities, and ethnic rivalries were driving the violence. 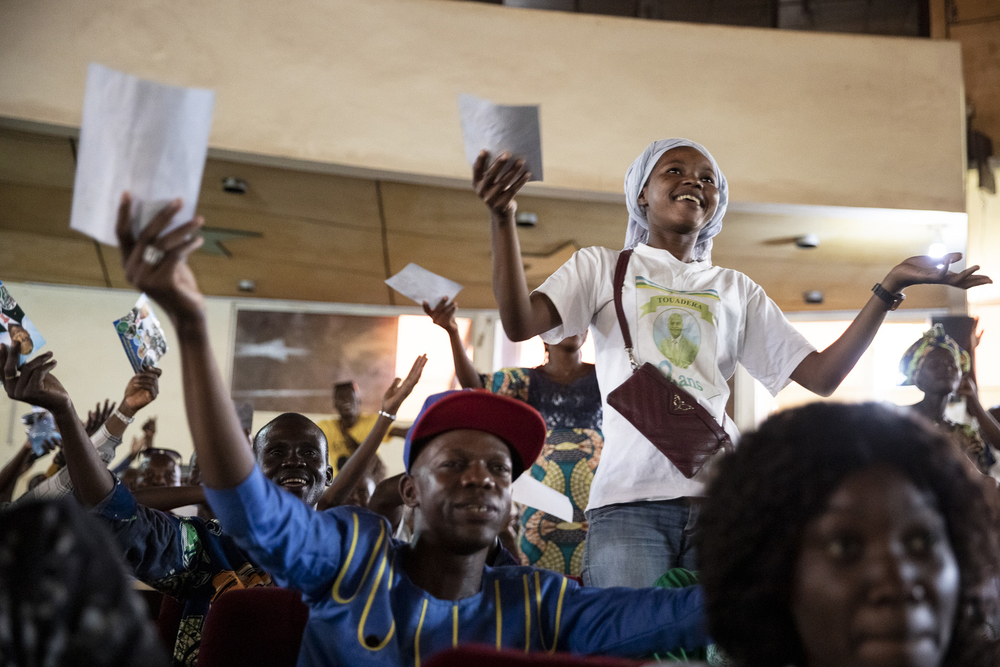 Adrienne Surprenant/TNH
Supporters of President Touadéra attend a meeting in Bangui. This month’s election will be the second since widespread conflict broke out in CAR in 2013.

As part of the Khartoum deal, rebels and government troops were supposed to join forces in mixed military units tasked with providing security in different parts of the country.

But progress has been slow: 3R rebels initially participated in the units only to withdraw and attack a training camp in June, while members of one mixed unit in the western town of Bouar recently went on strike to protest salary payment delays.

CAR has some of the highest humanitarian needs per capita of any country in the world. According to the UN’s emergency aid coordination agency, OCHA, some 2.8 million people – out of a population of under five million – require some form of assistance, and 1.9 million people are food insecure.

The UN’s refugee agency, UNHCR, has helped facilitate 17,000 refugees to return home since 2019. But coronavirus border closures have hindered efforts, and more than 600,000 Central Africans remain in exile.

CAR’s first coronavirus case was in March, but just 63 deaths have been reported since. The main impact of the pandemic has been economic: Supply chains from neighbouring Cameroon were choked by transport backlogs earlier this year, causing food prices to rise.

Distributing aid is complex in the country, which has poor road networks outside Bangui. In some cases, communities have even destroyed bridges to protect themselves from armed groups.

CAR is also among the world’s most dangerous places for humanitarians: Two aid workers were killed and 22 injured in 343 security incidents recorded in the first 10 months of 2020 – a 40 percent increase compared to the previous year.

“The continued insecurity and increase in attacks on humanitarians is impacting multiple aspects of the response,” said Maria Rosaria Bruno, acting head of OCHA’s office in CAR. “When humanitarians are forced to withdraw due to serious incidents, it has an important impact on people's well-being.”