The small group of militants were dismissed as bandits and machete-wielding gangs by Mozambique's government after they began launching attacks in the country's northernmost Cabo Delgado province in October 2017.

A little more than three years later, the jihadists count thousands in their ranks and end 2020 having seized towns, launched deadly cross-border raids, and displaced more than half a million people – the vast majority over the past few months.

As Mozambique’s army – and its South African mercenary allies – try to hold back the insurgency, local communities in parts of the province are forming self-defence militias composed of veterans who fought here during the country’s war of independence in the 1960s and 1970s.

Read more → Who's behind the violence in Mozambique's Cabo Delgado?

But these groups are reportedly committing their own abuses against civilians, and the insurgents – known as Ahlu Sunnah Wal Jammah (ASWJ), and aligned with the so-called Islamic State – are launching ever more brutal attacks, particularly in areas where militia members are active.

Mário Canhão Pedro, an 81-year-old man, told The New Humanitarian he fled his village of Muatide in late October during attacks that reportedly saw dozens of local residents decapitated on a football pitch – some of the worst violence in the province to date.

Pedro did not witness the mass killings – which the government denies took place – because he was hiding with other residents outside Muatide. But he said a local teacher who was part of his group was beheaded after insurgents stumbled across them in the bush.

“I don’t know what they want with this war,” said Pedro of the insurgents. “As an 81-year-old man, I don’t feel well being in this situation.”

Humanitarian groups told TNH they are struggling to respond to the rapid escalation of violence: Funding gaps have led to fears of food ration cuts for displaced people, while access constraints and restrictions on providing aid in insurgent-controlled areas mean some are missing out on assistance.

Displaced people are taking shelter across Cabo Delgado as well as in neighbouring provinces. The majority are living with host families, some of which have been hosting dozens of strangers for long periods. Others are staying in temporary camps set up recently by the government, while many are hiding out in the bush – some for weeks or months on end.

Hundreds of sailing boats carrying displaced people have arrived at the beach in Cabo Delgado’s capital city, Pemba, in recent weeks. More than half a million people have fled their homes overall as insurgents intensify attacks in the gas-rich province. (Emidio Jozine/TNH)

The militants' long-term strategy is anyone’s guess, but as they gain ground many fear the conflict will envelop nearby provinces in northern Mozambique and could even spread to neighbouring countries.

“Clearly these guys don’t seem to want to stay put,” said Paolo Israel, a researcher at the University of the Western Cape in South Africa. “Where are they going to strike next? We don’t know.”

Early on in the insurgency, members of ASWJ – one of a number of IS offshoots gaining ground in sub-Saharan Africa – rarely showed their faces, causing confusion among residents about who was behind the violence.

Though the group still has no clear leader or manifesto, videos filmed earlier this year during attacks showed fighters posing with Islamic State flags and criticising Mozambique’s government for corruption and neglect.

Research suggests the group is not new to Cabo Delgado. Some of its members are drawn from an Islamist sect – known locally as al-Shabaab or “the youth” in Arabic – that emerged in the province over a decade ago.

Its message has resonated with marginalised youth unable to benefit from the coastal region’s offshore gas fields, ruby deposits, and other natural resources exploited by local elites and foreign corporations.

Young men from the neighbouring provinces of Nampula and Niassa have increasingly been drawn into the insurgency. Researchers say these “recruitment reservoirs” indicate that the conflict’s root causes can be found throughout northern Mozambique.

As the group expands, its horizons are broadening: early this year the militants mainly attacked rural villages before retreating. Now they have a presence in most of the province’s 17 districts, and have taken control over key transport routes, waterways, and a strategic Indian Ocean port town.

Attacks are also spilling across borders. In October, a large group of insurgents raided a village in Tanzania’s southeastern Mtwara region. In a video of the incident, an insurgent is filmed saying, “we’ve come to remove Magufuli” – the surname of Tanzania’s president.

Brutal attacks suggest a plan to depopulate parts of the province, according to Israel, the researcher. “It appears that the tactic [Islamic State used in the Middle East] is the same they’re using here,” he said. “Basically to empty out, destroy everything, and whoever is left they’re going to adhere to your caliphate in the end.” 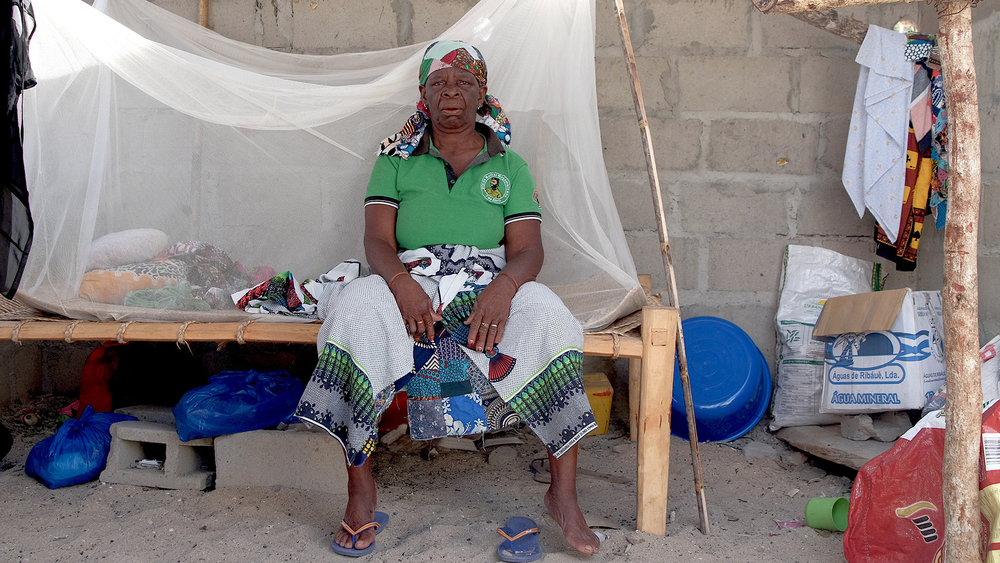 Israel cited the case of Mocímboa da Praia, a port town the militants have occupied since August. “Once they took Mocímboa, they told everyone… whoever stays here is with us, the others leave it. This is an interesting tactic… they don’t want people to stay.”

The reported beheadings in Muatide may have been designed to send a similar message. Local militias have been formed in the area to oppose the militants, and residents are considered more supportive of the government than in other districts where the insurgents operate.

“My guess is that attacks in that area... the violence, is to push people away and to avoid those militias forming or constituting a threat,” Israel said. “The militias are people that are under-equipped, but they are fighting to defend their own.”

The insurgents’ message has clearly been heard. Between late October and late November, almost 50,000 people fled their homes in Muidumbe, the district of northern Cabo Delgado where Muatide is located.

Thousands fled simultaneous attacks in other districts too, bringing the total number of displaced people in the province – which has an estimated population of over two million – to 570,000, according to the government.

To avoid crossing the militants, many of the recently displaced have boarded crowded sailboats on long voyages southwards to Pemba, Cabo Delgado’s capital. Shipwrecks have cost dozens of lives.

The new arrivals have overwhelmed the bustling port town, once popular with tourists. It’s estimated population has swelled from 200,000 people – according to the last census in 2017 – to 330,000.

Most of the displaced in Pemba are being hosted by community members – in many cases strangers they have never met before, said Raoul Bittel, head of operations for the International Committee of the Red Cross in Pemba. “There’s a lot of solidarity,” he said.

Saíde Magido, a displaced person from Muidumbe, told TNH he is living with 40 others at his sister’s house in Pemba, having fled his village in October. A bag of corn flour, some beans, and a litre of cooking oil is all he says he has been given. “I am not hearing gunshots,” he said. “But we are still suffering.” 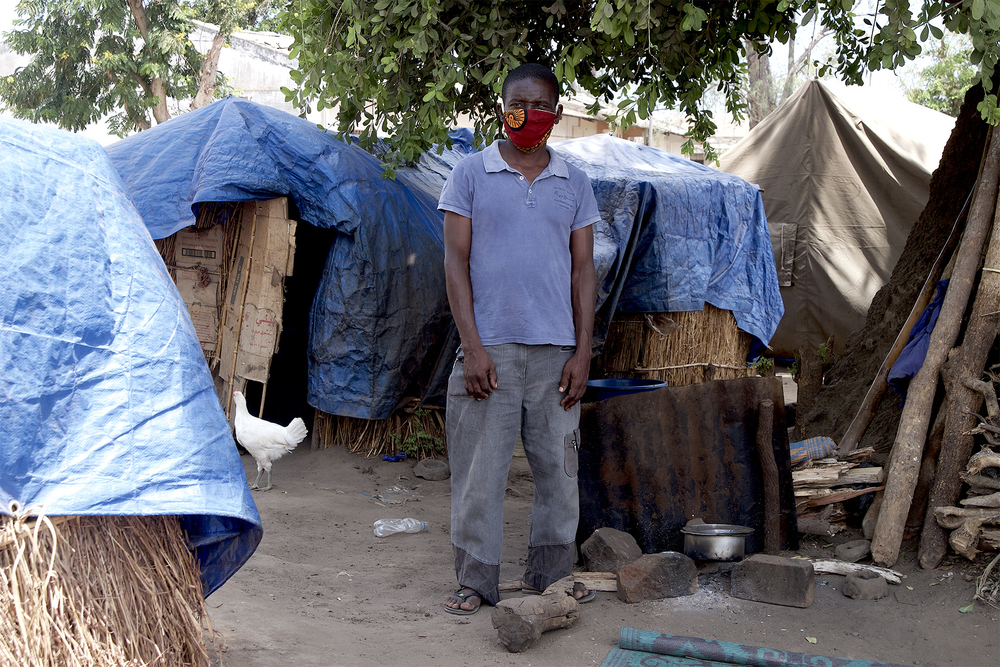 Emidio Jozine/TNH
37-year-old Momade Maraka fled his home in Quissanga district a few weeks ago after insurgents killed residents in his village. Attacks in Cabo Delgado have cost more than 2,400 lives since 2017.

After initially denying the severity of the crisis, Mozambique’s government is now searching for land to resettle displaced people. In the meantime it has set up temporary accommodation sites and transit centres in different parts of Cabo Delgado, as well in neighbouring provinces.

Bittel said conditions at the sites are “absolutely not good enough”, and that services normally found in permanent displacement camps are absent. According to a recent report on the camps by CARE International, some residents are living next to open trash pits and latrines, and in groups of up to 12 people per tent.

Although some aid groups have stepped up their presence in Cabo Delgado this year, needs are outpacing funding. The World Food Programme said food rations might be cut for displaced people this month despite an estimated 710,000 people now facing severe hunger in the province.

Access to thousands of people affected by the conflict has been significantly curtailed across northern parts of Cabo Delgado, where most of the violence is happening. “We don’t have access to all the areas that we would like to go to,” said Bittel. “That’s a major constraint.”

Afraid that aid will be diverted to the insurgents, government officials in Cabo Delgado have told humanitarian organisations to stop providing food assistance in areas where the militants hold sway, according to local media reports.

One aid official, who asked not to be named citing the sensitivity of the subject, told TNH that trucks containing food supplies from a UN agency had been prevented from entering Mocímboa da Praia earlier this year.

Another aid official, who also requested anonymity, said the government has been slow processing visas to humanitarian workers. The official said the delays were “hampering” operations in the province with “many people… waiting to enter the country”.

How much worse the crisis gets depends on what the insurgents do next. Analysts monitoring the conflict suspect they may be planning their first assault on the district of Mueda, which lies to the west of Muidumbe and contains a large military base.

As attacks on civilians intensify, Magido, who fled to Pemba in October, said he has no plans to return home, even as the woman hosting him – and 40 others – runs out of food to feed them all. “We are not going back if this war won't end,” he said.