As Cyclone Amphan barrelled down on Nagendrapur village in the Indian state of West Bengal in late May, Manasi Halder faced a dilemma: run for shelter, or risk waiting out the storm.

In normal times, Halder would have gathered her neighbours and headed straight for the nearest official cyclone shelter about eight kilometres away. But with the coronavirus pandemic surging across the country, “people were not willing to leave the village,” said Halder, who volunteers for a local NGO named Mukti. “They were afraid, because of the coronavirus outbreak.”

Amphan could not have come at a worse time in the Sundarbans, a low-lying, disaster-prone region straddling parts of coastal India and Bangladesh. Both countries were weeks into lockdowns meant to contain coronavirus outbreaks that have now infected more than 343,000 people in India and 90,000 in Bangladesh. Evacuees were forced to choose between being caught in the storm’s path, or the risk of catching the virus in crowded cyclone shelters.

Instead, the residents of Nagendrapur compromised. Rather than travel to the official shelter, they headed to a school in the village. With help from Mukti, Halder and her neighbours stockpiled the sturdy building with food, medicine, and hygiene kits, and made sure there was ample room for everyone to fit, even with social distancing regulations.

Cyclone Amphan, the most powerful storm to form on the Bay of Bengal since 1999, would send a wall of water more than three metres high crashing through the walls of Halder’s home. By the time it petered out later that evening, it had destroyed more than 90 percent of the houses in the village, and reportedly damaged some 1.5 million homes in the state as well as 330,000 in Bangladesh.

But Halder and her neighbours were safe. Despite the pandemic complicating evacuations, there were no casualties in Nagendrapur, and the national death toll – roughly 100 people – was low compared to previous disasters.

Across the globe, coronavirus health threats are adding new volatility to disaster preparedness planning. Since the pandemic was declared in March, at least three major storms have threatened parts of Asia and the Pacific: Amphan in India and Bangladesh, Typhoon Vongfong in the Philippines, and Cyclone Harold in the Pacific.

The dual threats posed by disasters and the virus have forced communities to rethink how they prepare. Aid groups say it has reinforced the value of locally driven responses, and of basic measures like ensuring adequate supplies and training early on.

The storms have also revealed emerging problems: vulnerable groups often ignored at the best of times are still overlooked, recovery and rebuilding may also take longer as economies struggle, and damage to regional healthcare hubs could escalate disease dangers – and coronavirus risks – by cutting off access for underserved communities.

These are lessons global aid responders are watching closely as the pandemic evolves. The hurricane seasons in the eastern Pacific and the Atlantic are just underway, and forecasts call for up to six major storms with wind speeds topping 175 kilometres per hour. Last week, parts of Central America were hit twice by a rare “crossover” storm that started in the Pacific then reformed in the Atlantic.

On top of this, climate change is increasing the frequency and severity of storms, compounding disaster risks in the coming months and years. 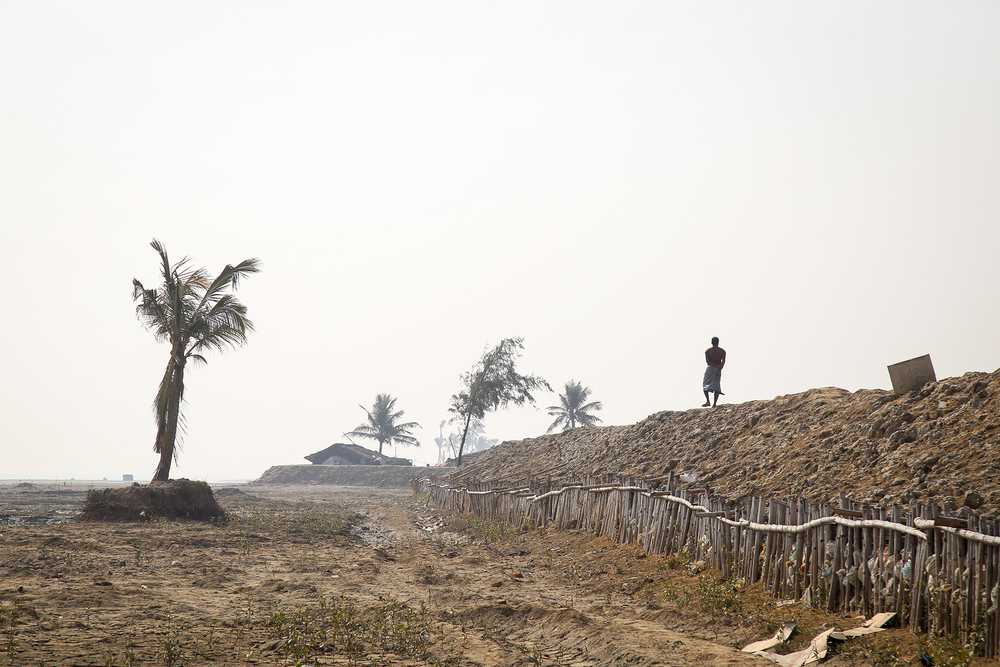 Catherine Davison/TNH
A man walks on a flood bank on Sagar Island, West Bengal, in 2019, shortly after a nearby village had finished rebuilding from a storm a decade earlier. In May 2020, Cyclone Amphan breached the flood bank, destroying parts of the village again.

Back to basics: Local response and preparedness

Kamal Kishore, a member of India’s National Disaster Management Authority, believes that “community engagement and initiative” were crucial in ensuring villages like Nagendrapur stayed safe during May’s Cyclone Amphan even amid the pandemic.

Local communities decided what to do in consultation with the government and NGOs, he said, allowing them to choose an acceptable alternative to the official shelter.

“If we had just invested in building flood banks, building the cyclone shelters, strengthening the early warning systems, it would not have worked,” Kishore explained. “We need all of those things to be community managed.”

Some aid agencies have been advocating for more local, community-driven responses for years, but “COVID is forcing us to move faster”, said Sanna Salmela-Eckstein, who works on disaster risk reduction at the International Federation of Red Cross and Red Crescent Societies (IFRC) in Asia and the Pacific.

Globally, some 23.9 million people were displaced by climate-linked disasters last year, according to the Internal Displacement Monitoring Centre. With the coronavirus, many countries are now “rethinking their ways of thinking” about disaster preparedness and response, said Salmela-Eckstein.

“If we had just invested in building flood banks, building the cyclone shelters, strengthening the early warning systems, it would not have worked. We need all of those things to be community managed.”

The Pacific Island nation of Vanuatu left its borders closed after Cyclone Harold struck in April, fearing an influx of international aid workers might import the virus.

“Even at the national level, access to communities is restricted,” Salmela-Eckstein said. “Now, more than ever, we need to rely on the existing local actors and the capacities that exist at the local level.”

In India, volunteers were instrumental in handing out supplies before and after Amphan.

“Normally, people from the town send help to the villages during this kind of calamity. But at this time, because of the lockdown, people cannot go out,” said Sankar Halder, the founder of Mukti. “Local people have to depend on themselves. Nobody’s going to help them.”

The organisation has more than 8,000 volunteers, including local women like Manasi Halder, who helped her village shelter safely. “They are able to help because they are locals,” the Mukti head told The New Humanitarian. “They have water, food, [and] tarpaulins that they can give to the community.”

Across the border in Bangladesh, responders are redoubling efforts on “pre-positioning” food and other essentials, and brushing up on training volunteers.

“Pre-positioning is key during disasters under normal circumstances, but particularly under the COVID situation where the country is on a shutdown and it’s harder to procure things,” said Azmat Ulla, head of the IFRC’s Bangladesh office.

Aid responders say the combination of the coronavirus and disasters has also exacerbated existing problems, especially for more marginalised groups like women and girls, people with disabilities, and migrants.

“The vulnerable groups that are impacted by natural hazard events tend to be the same that are most affected by this pandemic,” Salmela-Eckstein said.

Migrants and refugees are often missing in disaster and health planning, for example, while the differing needs of women and girls in evacuation centres are frequently overlooked. The risk of gender-based violence also rises in cramped quarters following disasters; aid groups say rates of violence during coronavirus lockdowns have climbed in many areas.

In Vanuatu, an island nation, long distances have slowed the overall response, and obstructed access to maternal care, sanitary products, and family services.

“Geographically, the islands are really spread out,” said Bronwyn Olul, who works for Vanuatu’s National Disaster Management Office. “In terms of addressing a lot of the gender issues, I would say that we’ve been facing a lot of difficulties.”

The storms have also shown the need to improve the reach of healthcare, especially as post-disaster disease outbreaks are common due to flooding and inadequate basic sanitation.

In the Philippines, Typhoon Vongfong caused coronavirus testing to be temporarily suspended in an area home to about 5.7 million people, and destroyed two thirds of coronavirus isolation beds in one province.

“The islands are really spread out. In terms of addressing a lot of the gender issues, I would say that we’ve been facing a lot of difficulties.”

Even with extensive risk reduction strategies ahead of time, however, the coronavirus could also slow longer-term recovery.

In the Philippines, movement restrictions could hamper any economic rebound, particularly in agriculturally dependent areas like badly hit Eastern Samar, already one of the country’s poorest provinces. Post-Vongfong floods damaged 25,000 hectares of agricultural land nationwide, according to the UN’s emergency aid arm, OCHA, and salinisation from tidal surges can leave land infertile for years.

“People have a tendency to push out of this area and go to Manila to seek employment” in times of economic distress, said Jerome Lanit, the emergency coordinator for CARE Philippines.

If they are unable to migrate because of coronavirus lockdowns, then “immediate recovery will be more difficult, and even more so in the longer term”, he added.

In Vanuatu, tourism accounts for a quarter of the country’s GDP, according to the World Bank, and would normally provide a much-needed boost after disasters. But many businesses suffering cyclone destruction continue to lose money due to the coronavirus. “The closed border is affecting the tourism industry big time,” Olul said.

Climate change is making storms more volatile as ocean surface temperatures rise and seasonal weather patterns are disrupted. Some see further evidence of this in the recent cyclones.

“For 10 years we haven’t had a typhoon in May. I just couldn’t fathom the possibility of that happening – but it happened.”

Vongfong, for example, arrived before the usual June start of the typhoon season in the Philippines.

“For 10 years we haven’t had a typhoon in May,” said Lanit. “I just couldn’t fathom the possibility of that happening – but it happened.”

And a rare cyclone in early June on India’s western coast narrowly missed densely populated Mumbai, the current epicentre of the country’s coronavirus outbreak. It was the first to threaten India’s financial capital in more than 70 years.