Cyclone Idai’s recent devastation was amplified by deforestation in the region. Mozambique took the hardest hit. The country has seen between 10 and 15 percent of its forests disappear amid illegal logging and charcoal production in the past 25 years.

More than 600 people were killed by Idai in Mozambique alone, many in landslides and floods. Another tropical storm, Kenneth, is due to bring strong winds and more heavy rain to the southern African nation in the coming days.

Before Idai, Rami Mariano farmed corn and sesame seeds to feed his family. Looking out at his ruined crops in the village of Metuchira, about 120 kilometres from the coastal town of Beira, he said he will now turn to charcoal production – made by cooking wood in a low oxygen environment – to earn a living.

“In a few weeks, I want to have my bags of charcoal ready for sale,” said 27-year-old Mariano, who was waiting for his harvest when Idai struck last month. 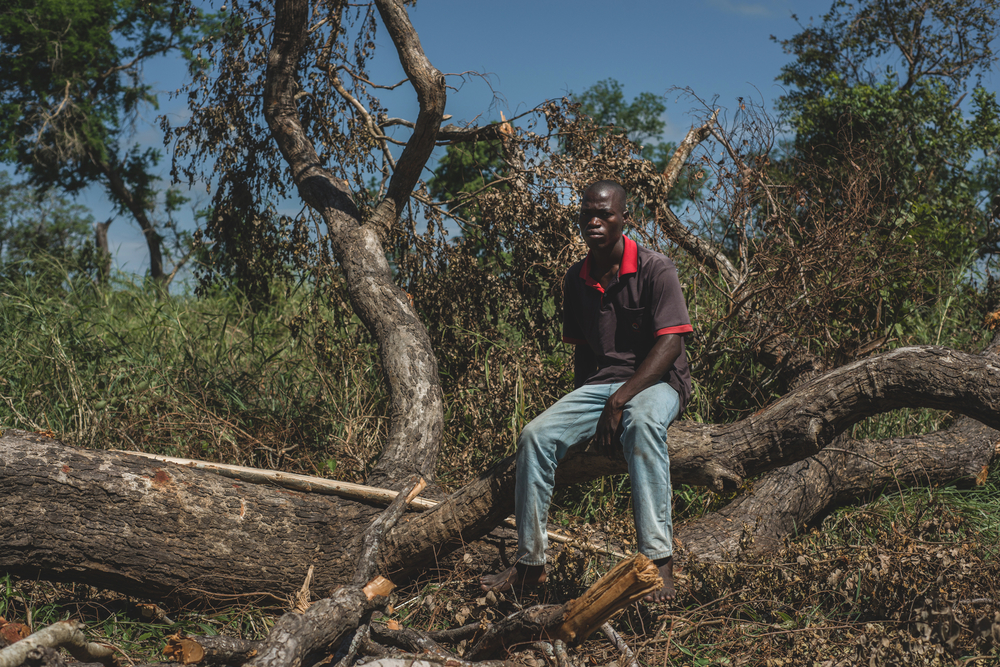 Brecht De Vleeschauwer/TNH
Rami Mariano, 27, lost his crops in Cyclone Idai. Now, the 27-year-old will turn to charcoal production to make a living.

Since 1980, Mozambique has lost some 370,000 square kilometres of its forests – an area larger than the size of Germany. Much of the loss has been attributed to slash-and-burn agricultural practices, but charcoal and timber production have also played a part.

Mozambique suffered the greatest damage when Idai struck the coastal city of Beira, swelling rivers and saturating the land. More than 340 people were killed in neighbouring Zimbabwe and 59 in Malawi. The two countries have also seen more than nine percent of their forests disappear since 2000, according to Global Forest Watch.

The effects of tropical storms such as Idai can be worsened by deforestation, explained Allan Schwarz, founder of the Mezimbite Forest Centre, a community-based programme that trains people in forest conservation, produces sustainable timber products, and participates in large-scale replanting programmes. Without shade, he said, air pressure fluctuations between the land and the sea can increase wind speeds.

“A healthy forest (also) slows down the speed of water until it reaches the ground,” Schwarz said. “This makes it possible for about 80 percent of the water to get absorbed into the soil… If the forest is lost, water moves faster and is substantially less absorbed.”

Authorities have attempted to limit and control charcoal production by requiring licenses, but production still continues illegally around Gorongosa National Park. The park, at the southern end of the Great African Rift Valley, used to support thriving wildlife, but its fragile ecosystems suffered during Mozambique’s 1977-1992 civil war. Recently, it has also seen some of its trees being cut down for timber or charcoal.

Some 20 people – seven Chinese nationals and 13 Mozambicans – were arrested last year for illegal logging in an area near the park. China buys the majority of Mozambique’s timber.

“Permissions are expensive, and it is easier to pay a bribe to an official than to get a charcoal licence,” said a producer who asked to be identified only as “Augustinho M.”

Idai damaged or destroyed many roads and supply routes, causing the price for charcoal to rise significantly – a motivating factor for farmers like Mariano.

"We know that chopping trees is bad for our fields, but at the moment it is the only way to have a possible income."

“We know that chopping trees is bad for our fields, but at the moment it is the only way to have a possible income in the weeks to come,” said Raymundo Bartolomeu, 50.

When Bartolomeu was 25 years old, there were still vast parts of the forest blanketing the Nhamatanda district where he lives. Loggers started by taking the larger and most valuable trees for export, and then small-scale farmers began chopping down other trees for charcoal production or crops.

In Nhamatanda, deforestation caused a 16 percent loss of tree cover between 2001 and 2017. Because it is close to the road leading to the port city of Beira, the area has seen large-scale industrial logging as well as charcoal production. 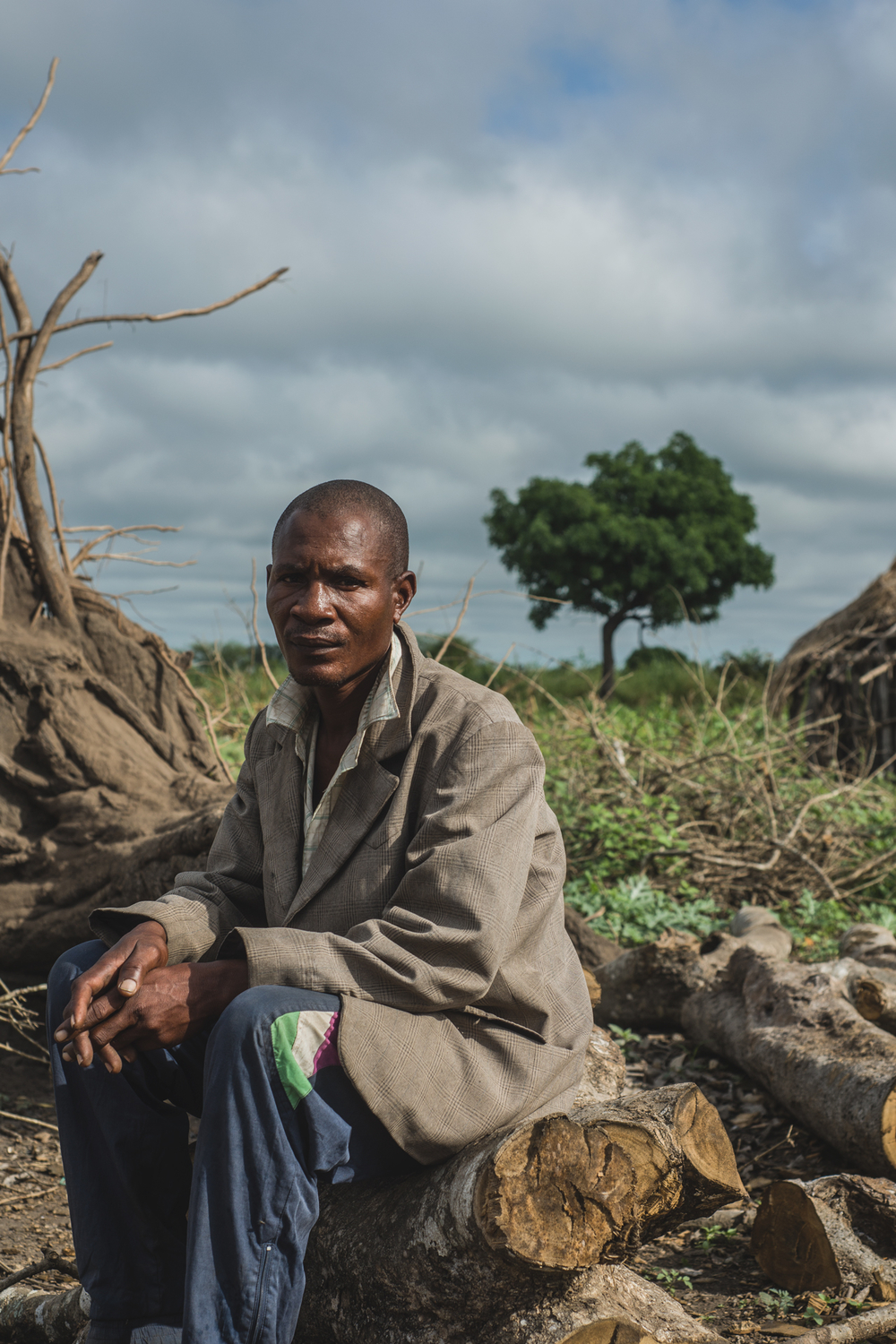 Brecht De Vleeschauwer/TNH
Raymundo Bartolomeu lost his harvest after Cyclone Idai. He says he has no choice but to cut down trees even though he knows less tree cover worsens the effects of climate change and tropical storms.

Schwarz said charcoal production itself doesn't have to be seen as the main problem. “Wood is a renewable natural resource,” he said. “That's why I think we should create charcoal farms for national production to make the process more sustainable.”

He said the msasa tree, known for its red and burgundy leaves, can grow large enough in 10 years for charcoal production. The process could be sustainable if managed well, he said. 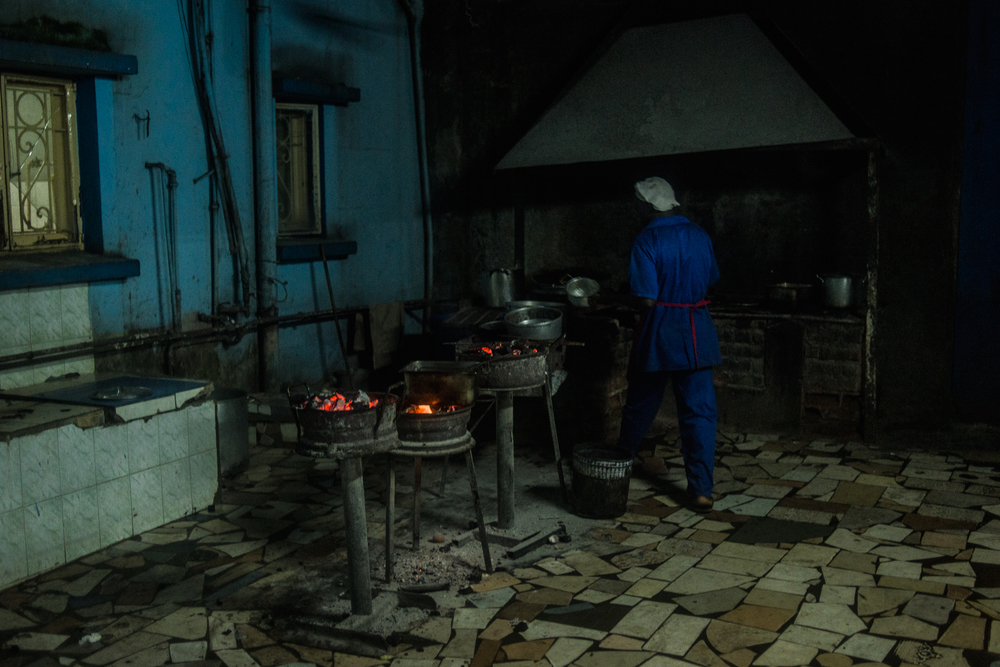 Andrew Hobbs, from the University of California’s Department of Agricultural & Resource Economics, said charcoal production can only be sustainable when communities have a way of managing their resources so they avoid chopping down trees faster than they can grow back.

“However, as the climate changes, resource management systems that were once sustainable may be no longer,” he said. “This can be exacerbated if migration from climate change leads to more concentrated populations in certain areas.”

Additionally, Hobbs said regulations on charcoal production have been difficult to enforce.

Farmers say they are conscious that deforestation worsens the effects of climate change but insist they have no other choice now to make a living.

“Normally I would produce about five to 10 bags every two months,” said Dio Sumeira, 70. “But I have nothing to harvest now so I probably will double my production.”

(TOP PHOTO: Felipe Pedro, 31, is a filling up a bag with charcoal in Gorongosa district. Mozambique is the 4th biggest producer of charcoal in the world.)