The well-worn description of migrants in Libya is of desperate people trapped in hellish detention centres trying to get to Europe. But many come for work, and some return multiple times despite the dangers posed by people smugglers, armed gangs, or merciless employers.

After years of civil conflict and political mismanagement, oil-rich Libya is on the verge of economic collapse. It can hardly look after its own financially struggling citizens, let alone its migrant workforce, who have become vulnerable to extortion, kidnapping, and other abuses.

Philip Badou, a Ghanaian pastor who has lived in Tripoli for the past 25 years and has a mostly migrant congregation there, said Libya’s downward spiral has made life so bad for migrant workers that some longtime residents of the capital are leaving.

“Libya always provided many opportunities for Africans, and they just weren’t interested in going to Europe before because they could make good money here,” said Badou. “This big problem with migration has really only started since 2011.”

This was the year Muammar Gaddafi was ousted. Under his rule, Libya had depended on a large migrant workforce; his 42 years in power marked by a reliance on oil revenues and the handing out to citizens of public sector jobs that required little actual work.

“Libya always provided many opportunities for Africans, and they just weren’t interested in going to Europe before because they could make good money here.”

The UN estimates there are currently some 670,000 migrants and refugees in Libya, including 56,455 currently registered with the UN’s refugee agency, UNHCR, and another 6,200 in detention centres across the country.

It’s not clear what proportion of those people are in the country solely to work, but it is still a mostly sub-Saharan African workforce that unloads cargo ships, tends to farmland, restocks shelves, operates most aspects of construction and demolition, and manages rubbish and street clearance. There are also Syrian and Ukrainian doctors and dentists, Indian and Iraqi teachers, Filipino nurses and oil workers, and Eastern European engineers.

Some migrant workers in Libya manage to get regular employment, but for most it is more of a struggle.

Across the country, many congregate at roadside points each morning, waiting for prospective employers. They can make up to 650 or 700 Libyan dinars per month – the average salary a Libyan in a state sector job makes – but their jobs are insecure and can be dangerous.

Migrant workers say they are often held up at gunpoint for their wages after a day’s work, if they are paid at all. Some foreigners are abducted off the streets and forced to work for free.

“One of my Nigerien workers went missing, and when I called his phone it was answered by a Libyan who had basically abducted the worker because he wanted a large farm area cleaned for free,” said Farouq, a Libyan who runs a beach resort in Misrata.

The kidnapping of foreigners for extortion is a common practice in some parts of the country, including the southern town of Sebha, a hub for the smuggling of goods and people. One church in Tripoli, which has an all migrant congregation, reported using most of its collections in 2016 to pay ransoms to free its members, although less so in the past two years.

Even foreigners who have been in Libya for several years have no legal resource. The country has multiple militias competing for power and no real police force with any quantifiable power, but also few migrant workers have official documents and there are few functioning embassies where they can be renewed.

This is a change from the Gaddafi years, according to 28-year-old Libyan taxi driver Mohamed. “No one would treat migrants like this [then]. It was illegal. They had rights,” he said. “I remember well one single case, before 2011, where Libyans attacked a migrant family accused of stealing. It was a major, shocking news story.”

While security threats can be a factor, it is mostly disenchantment with Libya’s financial situation that is driving migrant workers away to Europe or, in some cases, back home.

Official money transfers abroad in Libyan dinars have been impossible since mid-2014, and both foreigners and locals have to rely on the black market as the official exchange rate has been largely unavailable and irrelevant for years.

“Money is the main reason for so many people going to Europe,” said Badou, the Ghanaian pastor. “Since official money transfers stopped, there’s no way to send wages home legally and people have to work hard just to get 700 Libyan dinar, officially $504, which, on the black market, is now equivalent to $150, which is very bad. So of course, people start to leave.”

“Here in Libya, we really need migrant workers. To be honest, we can’t get anything done without them.”

Libya’s economic meltdown has meant banks have limited cash and restrict daily withdrawals, leaving most Libyans unable to access their own savings. As one government employee explained, salaries – routinely paid months late – are now “just a figure on paper”. This cash crisis has has been accompanied by rising prices, leaving many struggling financially.

The exodus is beginning to cause alarm among some Libyan employers, according to a senior member of the Ghanaian community who said Libyans had started pleading with Ghanian plasterers to stop leaving. Within Libya’s migrant workforce, many nationalities have “specialties” and there are few skilled plasterers able to fill the void left by departing Ghanaians, he said.

Libya is heavily dependent on its migrant workforce and some say that without foreign workers, the country would struggle to function.

“Here in Libya, we really need migrant workers. To be honest, we can’t get anything done without them,” said General Mohammed al-Tamimi, the military commander at a checkpoint north of Sebha. “Recently, when we capture migrants, they stay here with us and we employ them as labourers,” as there are no detention centres open in Libya’s south, he added.

In the open, but not safe

Despite the dangers of their lives here, they don’t live in hiding and, in Tripoli at least, they have long been a noticeable and active part of the community. 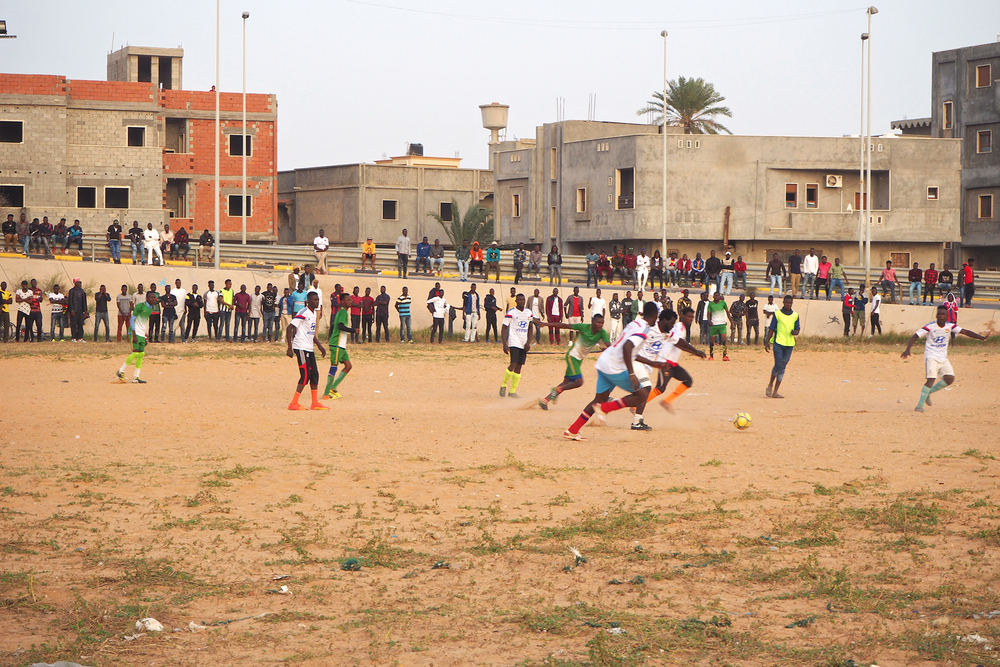 For example, every Friday for the last 20 years, migrant football teams have played on a wasteland patch in the capital’s Souq al-Juma district. Last year, several hundred migrants and a handful of Libyans gathered to watch the final of a four-month tournament organised by migrant football enthusiasts.

“We have no problems, no intimidation, nothing,” said Jaffa, a day labourer from Niger, one of the organisers. “The situation for migrants here is not like they say in the media. It’s actually okay.”

But “okay” masks a myriad of difficulties, both financial and otherwise. “These football matches are great because they allow people suffering a very difficult situation to put their energy into something positive,” said Ben Hamza Adali, a Libyan who plays on one migrant team. “This place is in a well-secured area and we don’t suffer from any threats or harassment because no one has a problem with football.”

Mid-game, a Toyota pickup pulled up and three men armed with Kalashnikovs, wearing official blue police uniforms and balaclavas, ran onto the football pitch, shooting in the air.

Efforts by Tripoli’s UN-backed Government of National Accord (GNA) to rein in the capital’s militias remain ineffective, with many operating independently, despite the state uniforms most now wear.

It may just have been a show of power but it sent hundreds of terrified migrants fleeing across the pitch, scattering out into the busy road. No one was injured and, after a few minutes, the armed men sped off. The footballers returned, with a greatly diminished audience.