This article is part of our in-depth coverage. Read more like this...
JUBA, South Sudan

It has been exactly half a decade since armed men stormed Matok Kuol’s home and murdered his family. The images of their bullet-riddled bodies remain singed in his memory.

“I’m not okay in my head,” explained Kuol, 23, speaking at the UN-run displacement camp in South Sudan’s capital, Juba, where he now lives. “I’m always stressed.”

What began on 15 December 2013 as a political power struggle between President Salva Kiir, his former deputy Riek Machar, and other opposition groups, quickly escalated along ethnic lines. Conflict has proliferated across South Sudan over the past five years, leaving almost 400,000 people dead, displacing millions, and plunging pockets of the nation into famine.

While politicians say they are now committed to a new peace deal signed in September, some people in South Sudan have started finding ways to rebuild their lives and a few have begun returning home. But many remain sceptical, especially since violence continues.

When Kuol first came to Juba in April 2011, just a few months before South Sudan gained independence from Sudan, he had hopes of belonging to a “good country, like others around the world”. He was studying to become a pharmacist and planned to move to Uganda to attend university. During his five years in the UN camp, unable to afford the fees, even the uniform, he hasn’t been to class once.

Since clashes began, South Sudan now has the world’s highest proportion of children out of school, a USAID official told IRIN. At least 2.2 million children aren’t getting an education, according to UNESCO, up from 1.7 million in 2013.

By early 2019 almost 50 percent of the country, more than five million people, are expected to face severe food insecurity and 36,000 will be on the brink of starvation, according to the latest analysis by the government and the UN.

The country’s leaders and politicians are roundly blamed for the conflict, and for its far-reaching effects.

“They have triggered a senseless and man-made war, which has created negative implications for innocent civilians,” said Edmund Yakani, executive director for the Community Empowerment for Progress Organisation, a local advocacy group.

Yakani said the mass rape of women and girls, extra-judicial killings by “unknown gunmen”, and roadside ambushes have all terrorised civilians, without the perpetrators being held to account.

Since the start of the conflict, almost two million people have been internally displaced, while more than two million others live as refugees in neighbouring countries. Almost 200,000 people are sheltering in six UN sites across the nation. Kuol is one of 32,000 people living in squalid conditions in the camp in Juba, too terrified to return home for fear of being killed.

Months after the peace deal was signed, progress is stifled by continued delays, missed deadlines, and ceasefire violations. The UN and aid groups said 150 women and girls were raped and beaten within a 10-day period at the end of November while walking to a food distribution site outside the town of Bentiu in Unity State. In a report released last month, a UN Panel of Experts expressed concern about “alarming” levels of sexual assault, compounded by a desperate humanitarian situation.

While the official ceasefire monitoring body has noted a significant decrease in fighting across the country since September, pockets of violence continue, particularly in Yei in central Equatoria State, in the northeast region of Wau, and in Unity State, where tensions remain high.

There has been a strong push to bring commanders of the warring sides together to build trust and prepare the government and opposition armies to unite as one, as stipulated in the agreement.

Last month, division commanders in Wau met for the first time since 2013 in an attempt at reconciliation. Government programmes are also slated to start in the new year to train fighters and redeploy them throughout the country, according to one opposition official, who wasn’t authorised to speak on the record.

While top commanders on both sides say they are committed to the peace process, a source familiar with the implementation of the accord told IRIN that fighters on the ground aren’t always aware of the ceasefire, especially those who are deep in the bush and don’t have easy access to information. The source said a lack of command and control within armed groups could allow violence to continue across the country.

The UN’s head of office in Wau, Sam Muhumure, told IRIN in November that civilians had recently been abducted about 50 kilometres outside the city and neither the government nor opposition took responsibility. David Shearer, the UN mission chief in South Sudan, said it’s also still possible that children across the country are being recruited into armed forces.

After speaking with local community leaders around the country, Aluel Atem, co-founder of Crown the Woman South Sudan, a local NGO dedicated to promoting gender equality and sustainable peace, said it was clear they had no idea what the agreement entailed, largely because of poor communication and a lack of engagement by politicians in Juba.

Atem, who grew up in exile in Uganda, said the most painful part of the last five years has been her loss of identity.

Recalling that her university transcript was inscribed with the letter ‘X’ under citizenship because officials didn’t know what to write, she said South Sudan’s independence in 2011 made her feel as if she finally belonged: “No more refugee status, no more running away”.

But everything changed in 2013 and now she feels her nationality is something she needs to “hide from”.

Atem said travel has become exhausting, with regional border agents stamping her passport and constantly asking: “Why are you South Sudanese killing each other?”

As a Dinka – the same ethnic group President Kiir belongs to – Atem says she no longer feels safe moving around the country, even declining work opportunities because of security concerns.

“The aspect of tribalism… and that [Dinka] identity has been branded as the identity of the ruling government, the top leadership destroying the country, makes me feel sometimes if I go to Western Equatoria it's not easy for me," Atem explained. “[The war has] damaged our social fabric, and I think it’s going to take another century to rebuild and proudly identify as one people.”

Pete Martell, a long-time observer, journalist, and writer on South Sudan, agreed. Regardless of the “paper deals and political struggles at the top”, building genuine peace that resonates on the ground will take a long time, he said. “There are tough, tough times ahead.” 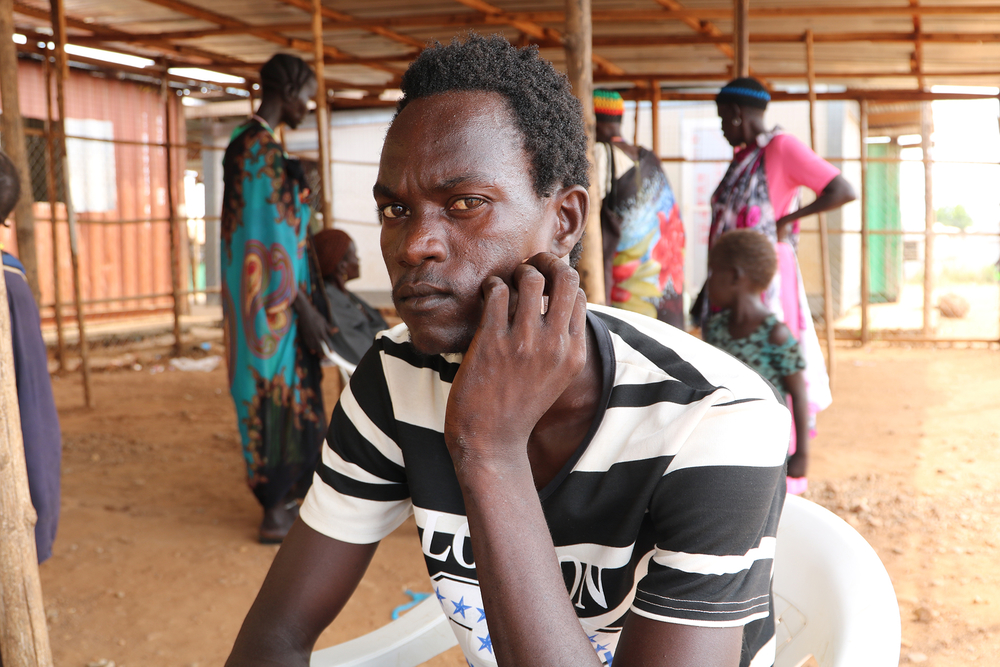 Sam Mednick/IRIN
Matok Kuol in the community centre in the UN-run displacement camp in Juba.

While the conflict has dissuaded many South Sudanese living abroad from returning, for one woman it was the catalyst that pushed her in the other direction.

She wanted to change the narrative, so she started working in conflict resolution before eventually relocating to South Sudan, where she became private secretary for Machar. “It was less about the ideology at first, but after I began to align myself with why I was there, came the justice and the push and pull of a revolution,” she said.

Thor worked with Machar throughout his transition to Juba in April 2016, where the rebel leader resumed his position as First Vice President. When renewed clashes broke out in July that year and forced him to flee, she remained, eventually taking a job with the government. Today, she serves as private secretary for First Vice President Taban Deng Gai, and is part of the group charged with implementing the new peace deal.

Some called her a traitor for joining the government instead of sticking with the opposition, but Thor says her actions have always been about peace. If people keep pushing the government and politicians hard enough, she said, things will change.

Remnants of 2015’s failed peace attempt linger, however, even as efforts to put the current agreement in place get under way. Scepticism runs deep, especially in opposition-held territories where those who fled recent fighting by government soldiers told IRIN in August that they won’t be convinced there’s peace until the army leaves their towns.

And some aid groups are concerned that too much optimism around the deal will negatively impact civilians, particularly if they decide to leave the UN camps prematurely. A report released last week by Refugees International warned that “rushed returns risk fueling ethnic tensions and costing lives”.

So far, those living in the camps aren’t convinced it’s time to go home.

In Juba, Kuol says his room-mate left the UN site at the end of October, only to be dragged into a hut and beaten by government soldiers, who sent him back to the camp with a message for its inhabitants: if you come out, you’ll suffer the same fate.

Leaning back in his chair, Kuol recalled his life before the war and imagined what it might be like when he is able to leave. “If I wasn’t in here, I’d be in school, I’d be working,” he said. “I’d be free.”

(TOP PHOTO: A group in the community centre in the UN-run displacement camp in Juba. CREDIT: Sam Mednick/IRIN)