The town of Bukalasi and nearby villages were worst affected: 144 houses washed away, at least 46 people killed, dozens injured, 858 displaced, and 12,000 left at risk of further landslides, according to statistics from the Office of the Prime Minister.

Landslides have become more common in this part of Uganda in recent years, as increasing human settlement and land cultivation strip the mountainside of vegetation. Among the most disaster-prone districts, Bududa experienced similar landslides in 2010, 2011, and 2012.

Late last month, IRIN visited the villages of Naposhi, Wanjenuwa, and Shilos, where survivors described how the disaster struck on a busy market day and took away their homes, businesses, and loved-ones.

“I scampered to save my life” 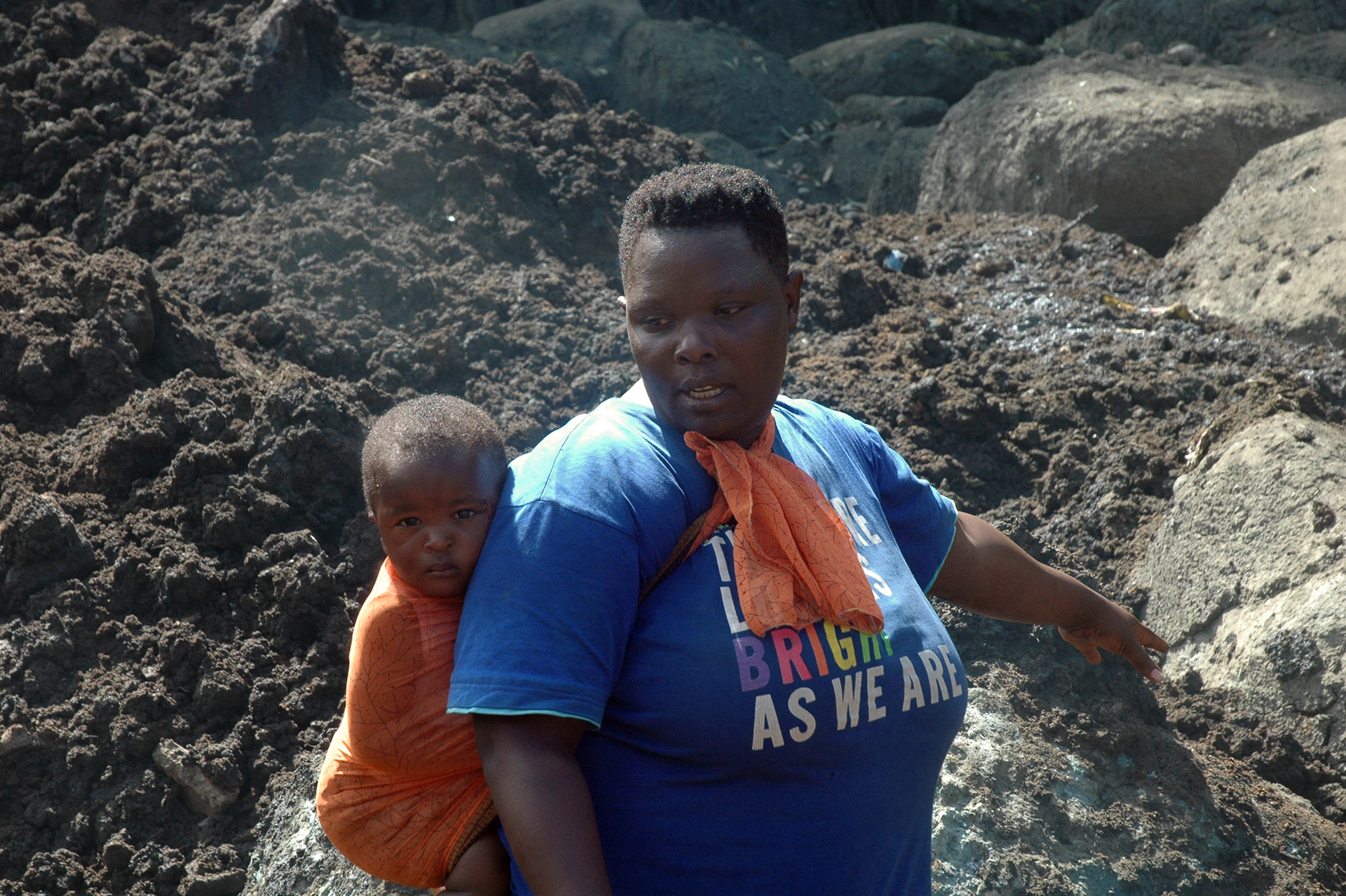 The disaster occurred on a Thursday, which was a market day. It was raining. I had so many customers in my bar and restaurant enjoying themselves. They were eating, drinking, and dancing.

At around 1pm I heard a funny sound and people raising the alarm. The customers didn’t hear. Some of them were already drunk. The music was loud. I got out. I saw people running. I realised there was something happening. I scampered to save my life. I couldn’t go back inside the bar to alert the customers [that] there is a disaster coming.

I fell several times. The stones hit and hurt me, but I couldn’t stop. Although I managed to save my life, I failed those who were inside my bar and restaurant. I have the pain and trauma.

I lost my sister who had come to visit, and 32 customers who were drinking and partying. They were washed away by the flash floods and boulders.

I am here stranded. Where do I start a new life from? All the plans and investments I had were in this place. I lost everything.

I haven’t received anything since the devastating disaster occurred. I am struggling with five children. My name is not on the list of the affected persons.

I fear to remain and stay in this place anymore. It’s dangerous. I might be the next person to perish like my sisters and customers. I am willing to be relocated anywhere. 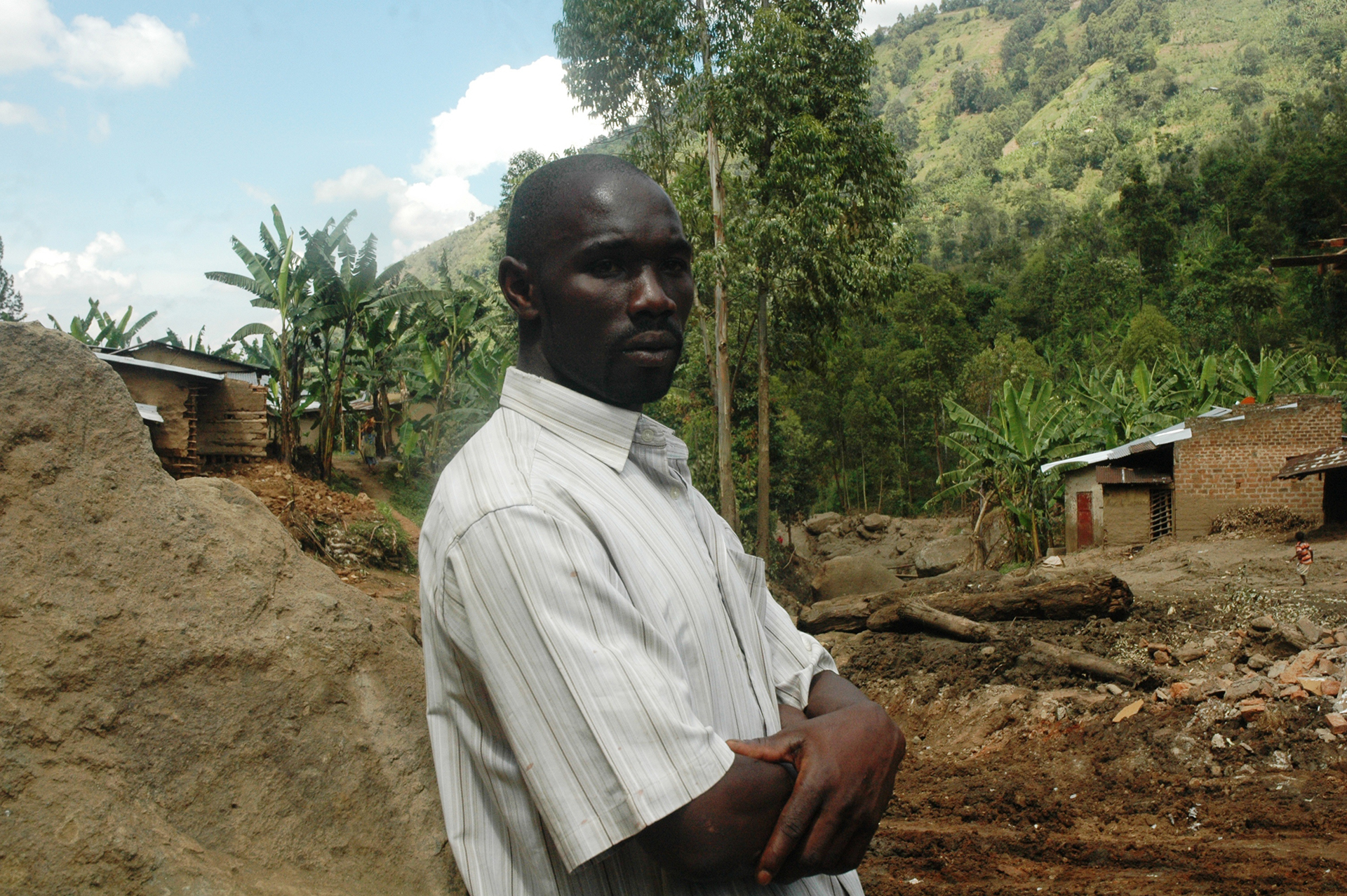 I was in the shop. I heard a loud explosion around 1pm. I got out immediately. I checked up the mountain. I saw water and stones coming down with speed. I took off and ran to cross the bridge.

Whoever heard the sound and came out of their houses were able to run and survive. Those who stayed in the houses all went with the waters, mud, and stones. There was no chance for them to survive the water and boulders.

Two of the people whom I was seated [with] inside [the] shop died in the disaster. They failed to get out and run because they doubted the sound and people’s alarm. They were kind of confused of what was happening. They were washed away. We managed to recover their bodies and buried them. It’s tragedy to lose a cousin and friend whom you were seated [with].

I feel a lot of pain in my body. I sustained injuries to my hands, knees, and back in the process of running to save my life. I don’t have any money to get proper medication.

Life is hard and difficult. I lost everything. All items and money in the shop were destroyed and washed away. I am sharing a small tent with my wife and seven children.

We have to depend on the church, humanitarian agencies, and government relief assistance. But the posho [maize grains], beans, and cooking oil is not enough.

“It was a miracle that I survived” 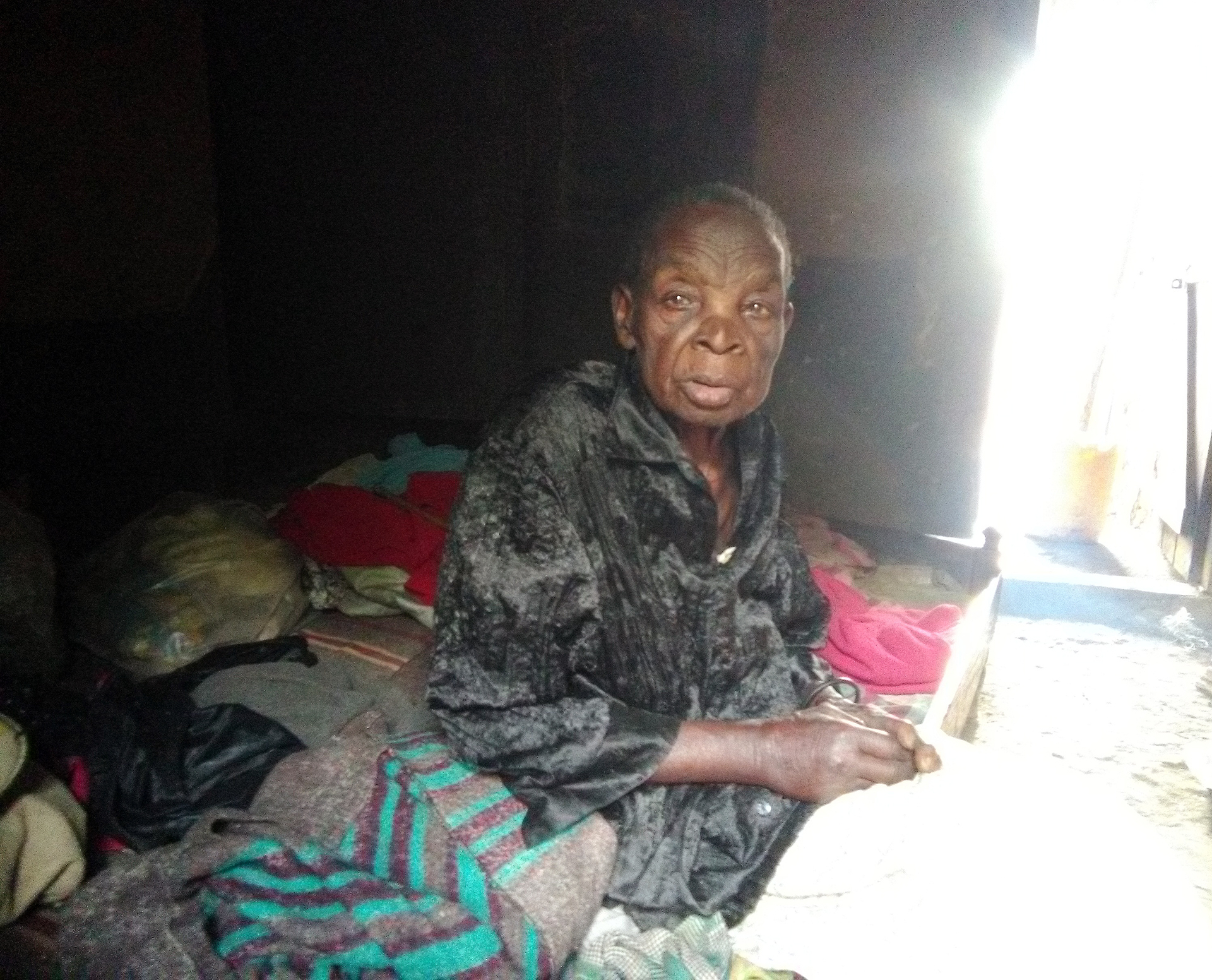 Everybody ran away and left me. I was abandoned. My daughter, who was feeding, fled and left me alone. She didn’t bother about [her] paralysed and elderly mother.

I couldn’t get out and run. I remained seated in bed. I prayed to God to save me. The water entered the house and covered it. I knew I was dead. It was a miracle that I survived. The flash floods and boulders didn’t destroy the whole house. The waters washed away half of the house where one of my grandsons was. Unfortunately, he [grandson] wasn’t lucky. He was swept away.

His body was recovered and buried there. When my children and grandchildren came back they couldn’t believe I was still alive. They picked me up and carried me away. I was all wet, shaking and shivering.

They didn’t have a proper place to keep me. After a few days they brought me back to this dangerous place.

The landslides have become common. People are cutting trees, cultivating on steep slopes, and staying along the river banks, which is risky and dangerous. Let people agree to be relocated and these places planted with trees to conserve the soils and environment.

“All those in the houses were washed away” 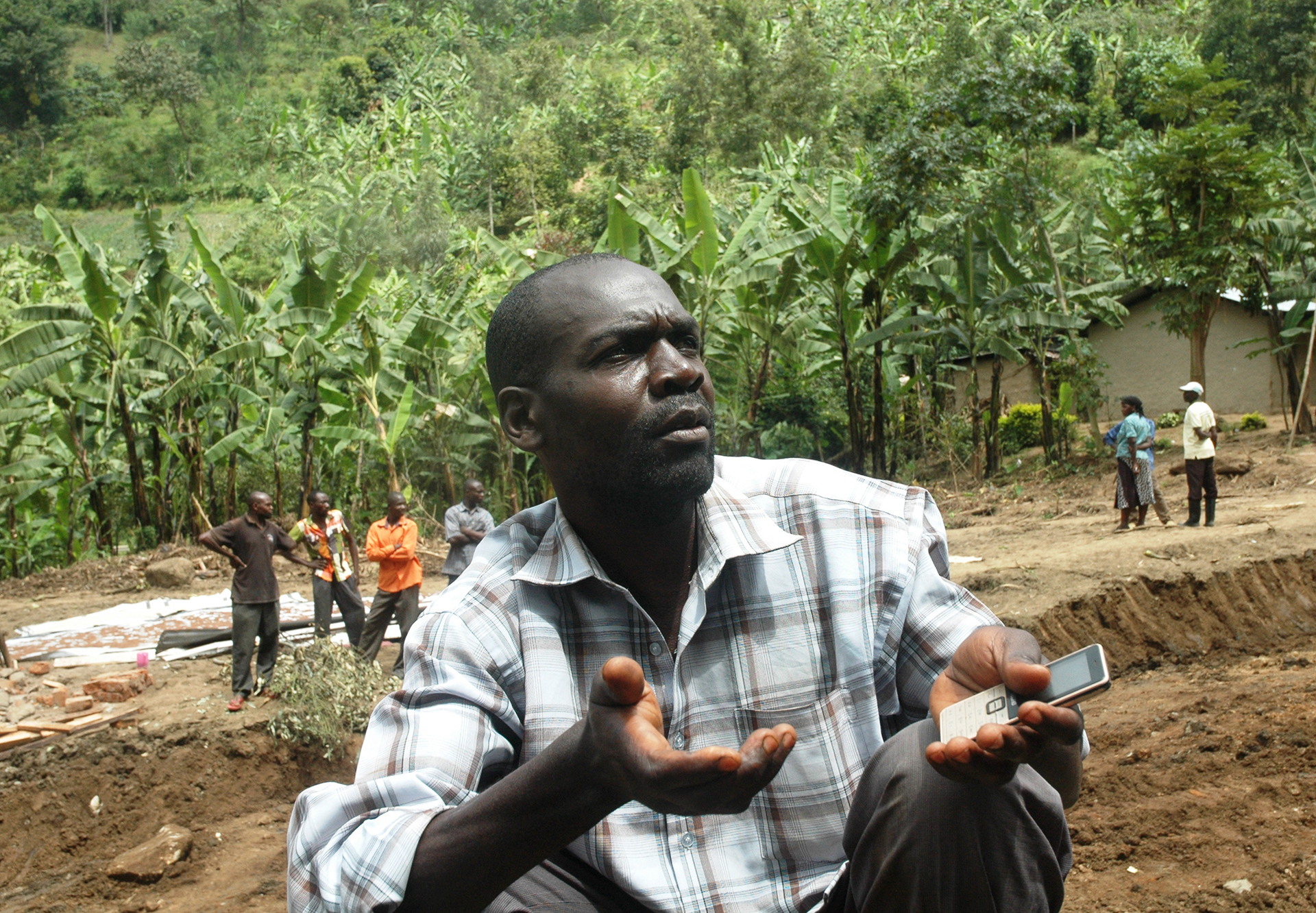 I had a permanent house and shop. But all destroyed and washed away within minutes. I was in the shop selling. I heard people raising the alarm and running in different directions. They were screaming ‘soil and water [landslides] are coming to finish us’. I ran and crossed the bridge.

My nephew who was following me from behind couldn’t make it. He was caught by the speeding water while trying to cross the bridge and washed away. I watched in disbelief as he was swept off. I couldn’t help.

Most of the people who died were caught while running to cross the bridge. Some were got while resting, eating, and drinking in the local bars. All those in the houses were washed away.

I am still struggling to come to terms with what happened. I mourn my relatives, friends, and customers I lost in this landslide.

We lost everything. We appeal to government to compensate us for the losses and property destroyed by the landslides to start new life.

It’s so dangerous. We can’t continue to stay here. The government should expedite the process to see that people are taken to safer places where we are not killed by the natural calamities [landslides and flooding].

“I couldn’t see my house, neighbours and friends” 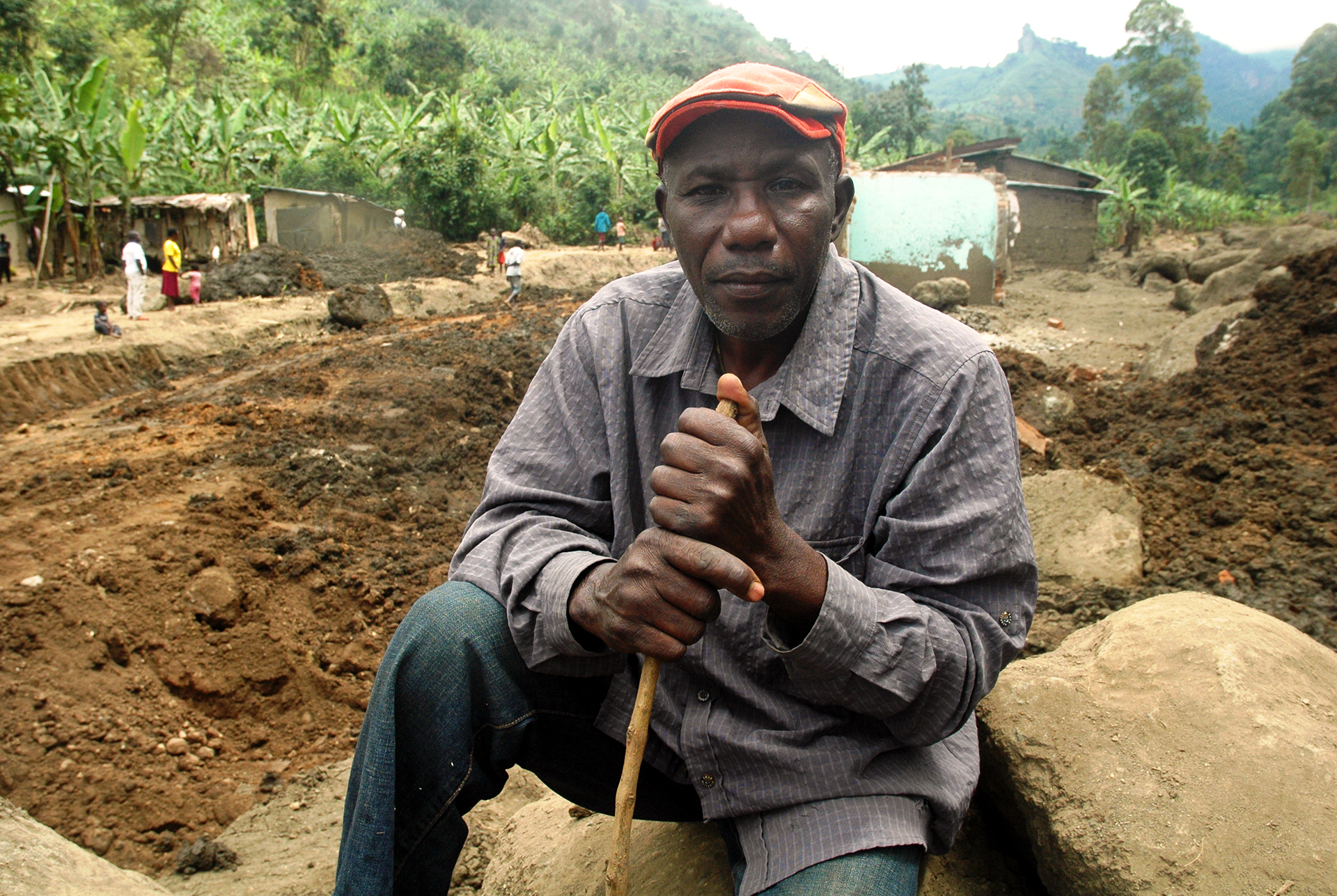 Lawrence Khisa 57, husband of two wives and a father of 10 children from Wanjenuwa

It’s the sickness and rain that saved me. This disaster occurred when I was returning back from Bududa hospital. My wife had accompanied me for treatment since I was weak.

As we were returned home after hospital it started to rain and we branched to some place to take refuge for the rain to stop.

A few minutes [later] we saw [fast] running water and boulders along the river. It was carrying iron sheets and trees. We knew a landslide had occurred up the mountain.

When it stopped raining we tried to cross Nakwasi Bridge, but the water levels were high and we waited for it to subside. We saw two bodies and managed to retrieve them. One, the head was smashed, and the other’s leg was cut off.

When I got to our village centre I found it completely destroyed. It was all covered with huge boulders. I couldn’t see my house, neighbours, and friends. They were all carried away.

If I hadn’t gone to the hospital, I would be in the house resting or sleeping. The floods would have carried me away.

The trauma is much. I lost an eight-year-old girl, my clan leader, two brothers, a neighbour, and three friends in this devastating disaster.

We don’t want to be caught in another landslide. Let the government speed up the process for our relocation.

“I had to run to save my life” 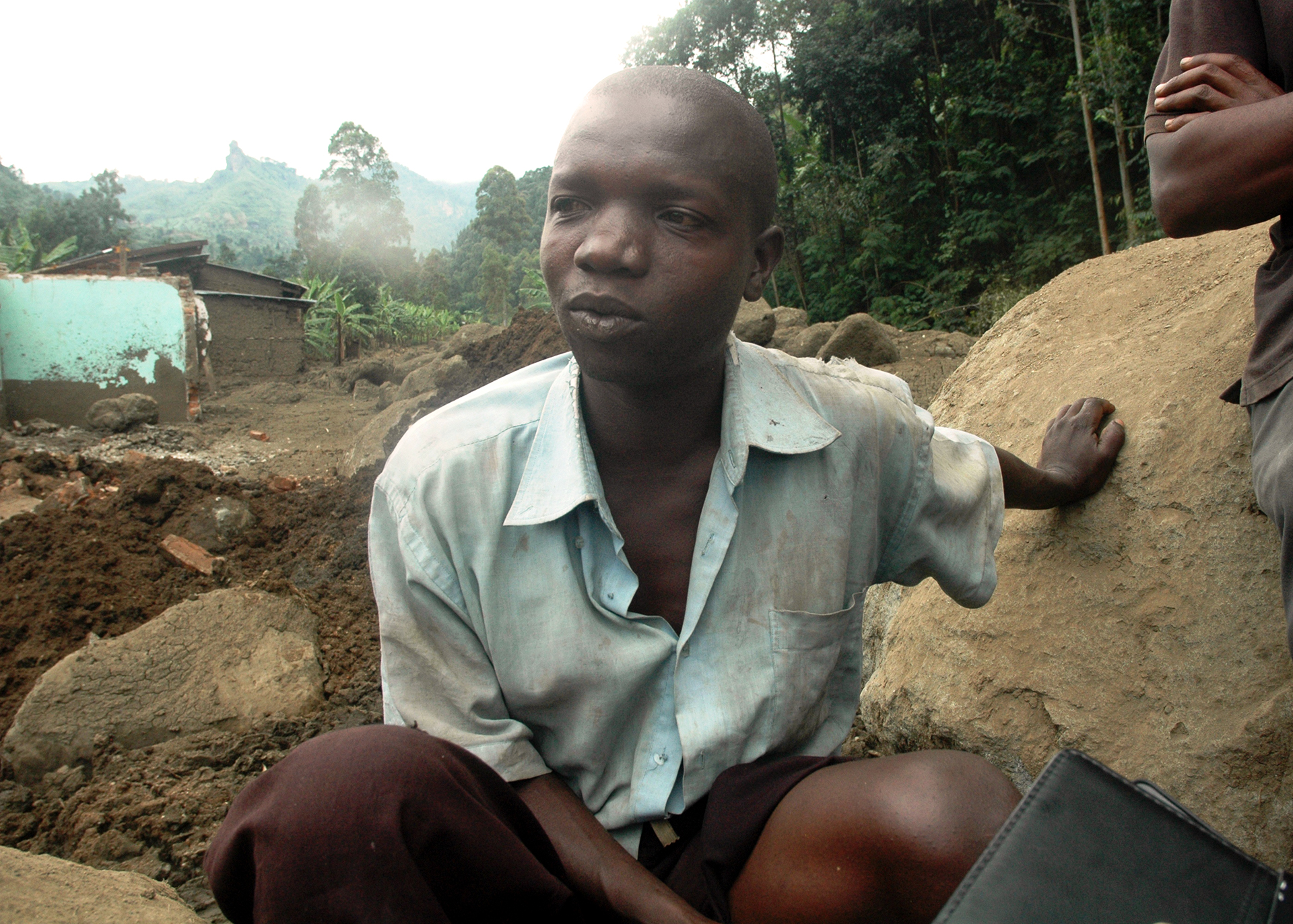 This disaster happened when I had just returned back from the garden and opened the shop. I had four friends and customers who were drinking local brew. I heard people raising the alarm and I got out. The four stayed behind. They thought people were chasing a common thief.

I stared up. I saw the terrible flash floods coming. I didn’t waste any time. I took off and didn’t bother to go back to the shop to alert and warn those inside that there is danger. I had to run to save my life. The four perished.

When the water calmed down we started searching for the bodies. We managed to retrieve the body of an old woman who was selling local brew near my place and three of the four people who were drinking at the shop. We haven’t yet recovered one.

I have stopped taking alcohol. My friends died because they were drunk. They couldn’t hear any sound.

I am counting huge losses. The lockup shop I was using for my coffee and onions business was washed [away]. The rentals had were washed away too.