This article is part of our in-depth coverage. Read more like this...
PORT OF SPAIN/Trinidad and Tobago

Until a week ago, Enrique Ceballos was a High Court judge in eastern Venezuela. But now he’s waiting on a plastic chair outside an NGO-run registration centre for asylum seekers in Port of Spain, the capital of Trinidad and Tobago.

Ceballos said he fled his home in Venezuela with his wife, son, and daughter because he faced threats due to his work as a judge.

“I needed to rule in favour of the government,” he said. “It’s really difficult to work like that.”

More than 1.6 million Venezuelans like Ceballos have left the country since 2015, leaving behind a crumbling economy and a political crisis that has triggered shortages in food and healthcare. While hundreds of thousands have headed over the border to Colombia, others have spread throughout the region – including Caribbean island nations like Trinidad and Tobago, which lies only 15 kilometres away from Venezuela’s eastern edge.

One of the only agencies working with the growing number of asylum seekers here is Living Water Community, a local Catholic non-governmental organisation that helps newcomers like Ceballos apply for asylum and integrate.

Rights groups say the work of local civil society and church groups is critical in the Caribbean, where the soaring numbers have taken small island governments by surprise. Authorities often don’t have the resources, infrastructure, or policies in place to receive asylum seekers, and some governments have deported newcomers or erected roadblocks for those seeking protection.

This includes the Venezuelan migration crisis: the UN’s refugee agency, UNHCR, says it needs $46.1 million to help countries in South America, Central America and the Caribbean cope with the influx. The appeal is roughly half funded. The UN’s migration arm, IOM, is also asking for $32.3 million to carry out its work, including in six Caribbean countries.

In 2013, only 43 people from throughout the world applied for asylum in Trinidad and Tobago. As of July, there were more than 4,800 applicants from Venezuela alone, and an estimated 40,000 Venezuelans in the country overall, including legal and undocumented migrants, according to the UN.

“Quite frankly, we can’t keep up resource-wise with the demand and needs,” Nakhid says.

Local groups one of the few relief efforts for asylum seekers

Living Water Community was founded in 1975 by members of the Catholic Church in Port of Spain. Today, its 180 employees are active on social issues locally and in other parts of the Caribbean. In 2016, the group created its Ministry for Refugees to take on the growing number of asylum cases in Trinidad and Tobago.

With the Venezuelan exodus spreading throughout the region, local NGOs and civil society organisations are “incredibly important”, says Carolina Jimenez, deputy research director for the Americas at Amnesty International.

“In general terms, it is safe to say that most Caribbean islands are underprepared for large numbers of asylum applicants,” Jimenez said.

Trinidad and Tobago only established a refugee office in 2016, while legislation that would define rights and help integrate refugees is still pending. The UN’s refugee agency, UNHCR, opened an office in the country in 2016 with one international staff member. It relied on Living Water Community to facilitate asylum registration, and to identify and refer people who may need protection. UNHCR has since expanded its staff and opened an asylum registration centre on 17 August.* 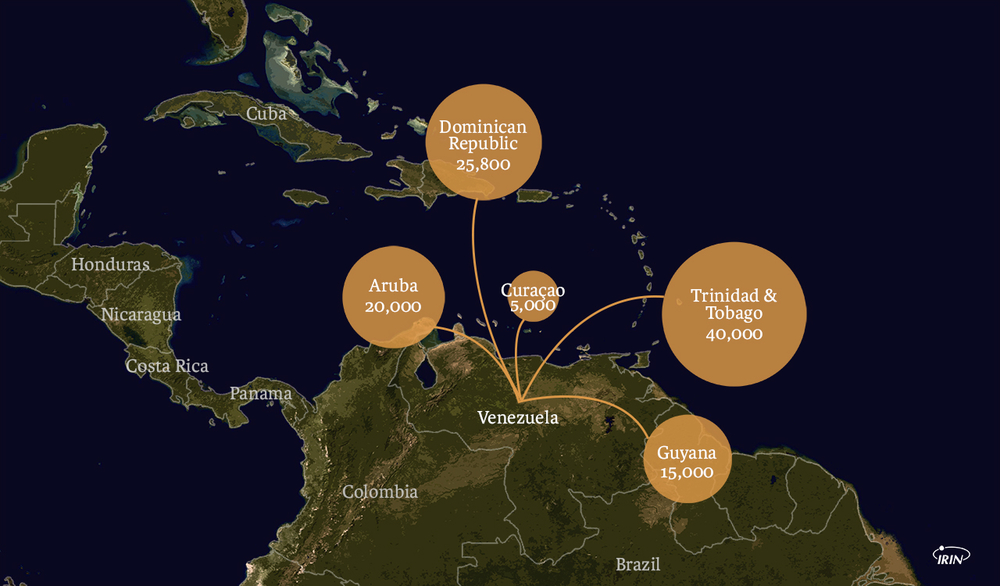 The Venezuelan exodus is considered sensitive in many Caribbean countries. Some governments have close ties with the Venezuelan government, which has rejected humanitarian aid and downplayed the severity of its economic crisis.

There are more than 100,000 Venezuelans in countries around the Caribbean. This includes:

Trinidad and Tobago, now home to an estimated 40,000 Venezuelans.

Curaçao, where authorities are effectively refusing to process asylum claims for an estimated 5,000 to 15,000 Venezuelans, according to Amnesty International.

Aruba, to where an estimated 20,000 Venezuelans have fled. The government here allows registered asylum seekers to work.

Guyana, where the government lacks clear refugee policies but, according to Human Rights Watch, allows some 15,000 Venezuelans to have access to healthcare and three-month stay permits

The Dominican Republic, which is now home to at least 25,800 Venezuelans. The country has laws regulating the asylum process, but rights groups say authorities have made it difficult for newcomers to apply.

Trinidad and Tobago has signed on to key international conventions that protect the rights of refugees. But, in practice, authorities have often been less than welcoming.

In April, the government deported 82 Venezuelans, including registered asylum seekers and people who intended to apply for refugee status, according to UNHCR. Human Rights Watch says local authorities continue to detain people with asylum seeker certificates.

Prime Minister Keith Rowley lashed out at UN statements expressing concern after the deportations, telling local media that a small country of 1.3 million people “cannot and will not allow UN spokespersons to convert us into a refugee camp.”

In July the government said it was working to implement new policies to help refugees and asylum seekers, which could include training for immigration officers.

The Ministry of National Security, which oversees refugee issues in the country, did not respond to IRIN’s interview requests.

Most Venezuelans in Trinidad and Tobago arrive without significant savings and turn to under-the-table jobs, as they don’t have the legal right to work.

Living Water Community provides asylum seekers and their children with cash grants and a place to stay. It tries to place asylum seekers with host families, but many newcomers are spread out over the twin islands in search of shelter.

“We’re trying to identify buildings that we can either rehabilitate or just put furniture in or whatever, so that we can provide accommodation at a lower cost for the Venezuelans,” explains Living Water Community’s Nakhid.

A worrying new trend is a rise in unaccompanied children coming to Trinidad and Tobago. Living Water Community recorded its first case this year; there are now at least 13, says Veronica Jeffers, a protection officer with the organisation.

This includes José Riviera, a 17-year-old from Caracas who arrived here with his family but was abandoned on the island.

The teenager dribbles a football on a field outside the capital where Living Water Community set up a football school for undocumented children. “I hope to play one day for a professional team in Trinidad,” Riviera says.

There are enough participants for two small teams, both trained by a Trinidadian coach.

The Venezuelan youngsters quickly pick up English, Trinidad and Tobago’s official language. One of the football players is Americo Rodriguez, a 16-year-old from Caracas who has already spent four years on the island.

Rodriguez and his parents are recognised as asylum seekers and have managed to integrate. 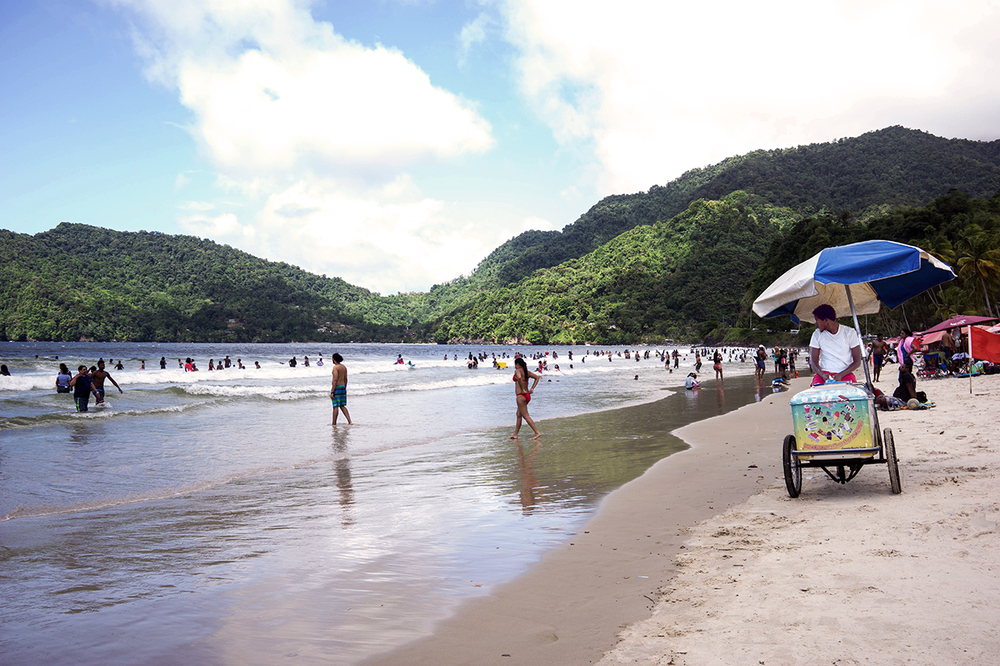 Bram Ebus/IRIN
On Maracas beach in Port of Spain, local informal beach vendors have prevented Venezuelan migrants from selling products. More than 4,800 Venezuelans are seeking asylum in Trinidad and Tobago, but they don’t have the legal right to work.

On paper, their UNHCR certificates protect them against deportation, but it does not allow them to work. Rodriguez’s father is able to pay rent because he works informal jobs. Rodriguez himself teaches taekwondo to local kids each Saturday.

Seeing the government reaction to the growing number of asylum seekers, the Catholic Church announced in May that newcomers would be given food and shelter at any church on the twin islands. Jason Gordon, archbishop for Port of Spain and a member of Living Water Community, sees two options: either the refugees end up in informal economies and persecuted as outsiders on the island, or they are welcomed and helped to integrate.

He acknowledges that the small island nation will one day reach a tipping point, where it can’t afford to host new asylum seekers – but this peak has not yet been reached, he says. For now, he wants every parish on the island to be a place where asylum seekers can feel welcome, adding: “We’re like a mangrove, absorbing and distributing the water.”

(* Pseudonyms were used for Venezuelan asylum seekers, who asked not to be identified in this story.)