Detailed talks began today in Geneva aimed at drafting a new Syrian constitution, with discussions between government, opposition, and civil society representatives being closely watched for signs of progress in the bitterly divided country after eight and a half years of war.

Participants have offered few comments on the content or atmospherics of the negotiations, but did the language used in opening speeches for the government and opposition last week suggest any commonalities that could help shape the way forward?

Since it began in March 2011, Syria’s civil war has left half of the population forced from their homes, hundreds of thousands dead, extensive human rights violations, and plummeting living standards. An earlier round of negotiations in Geneva in 2014 collapsed.

Some language in the opening statements on Wednesday hinted at the distance between the sides: Ahmad Kuzbari, speaking for the government, said it was engaged in an ongoing war against terrorism, rejected foreign interference of any kind, and praised the national army. His speech spoke of blood, sacrifice, and victory.

The opposition co-chair, Hadi al-Bahra, emphasised the need for justice, the fate of detainees, and pointed at previous UN resolutions calling for an inclusive political settlement. He also mentioned human rights, pain, and pluralism.

Despite their differences, both sides used some common vocabulary, showing at least some shared hopes. Here’s what their speeches look like side by side. 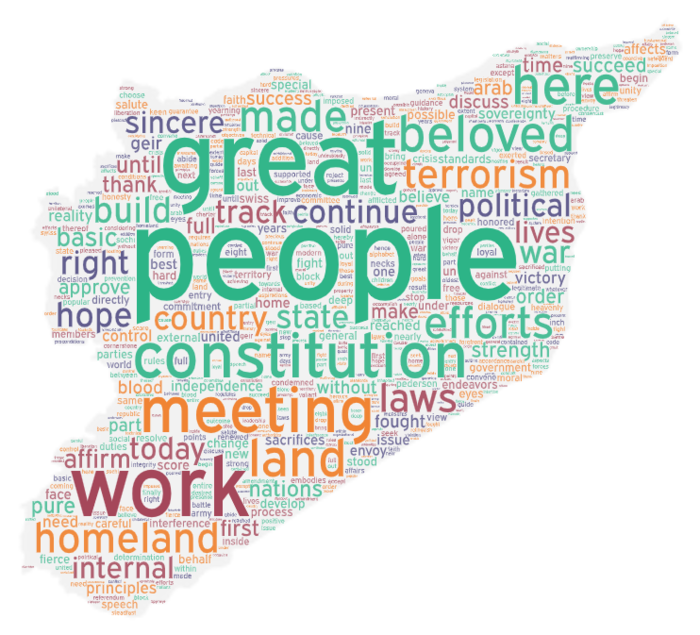 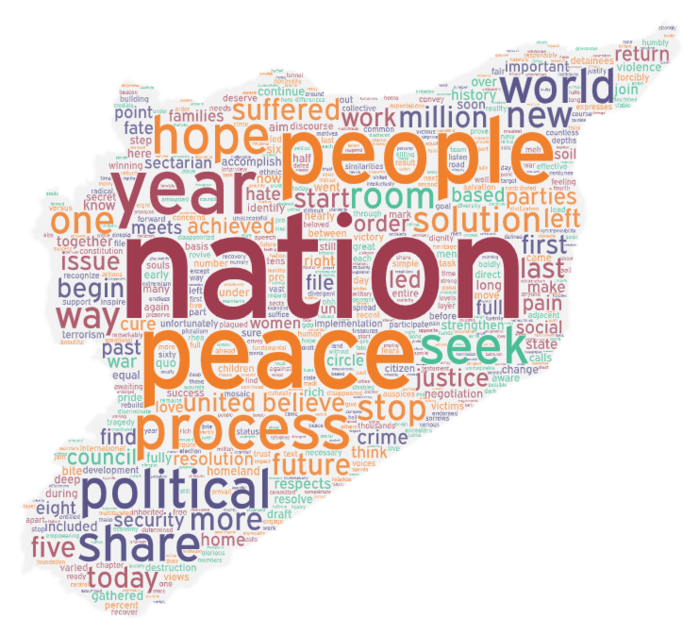 [Methodology: to ensure similar results, we processed each speech from the original Arabic through Google Translate, then prepared the word cloud using the online tool Word Art. That removes common English words (and, but etc), and consolidates variants of the same word by “stemming”. The larger the word in the graphic, the more often it appears in the translation. Colours are just for readability. For the UN speech, we used the original English text. We also removed the words Syria, Syrian, and Syrians – frequent in all three.]

The two co-chairs represent two thirds of the 150-member committee. The remaining “Middle Third” are 50 people from a variety of backgrounds agreed and chosen by the two sides. That group has no official leader and did not give an opening statement.

In his opening remarks, UN envoy and facilitator Geir Pedersen said the much-postponed talks are “a powerful sign of hope for Syrians everywhere”.

Pedersen acknowledged the difficulties, in particular the challenge of fostering even the most basic engagement between the members of the committee. ”I know that it is not easy for all of you to be here together in this room,” he said in his opening speech. 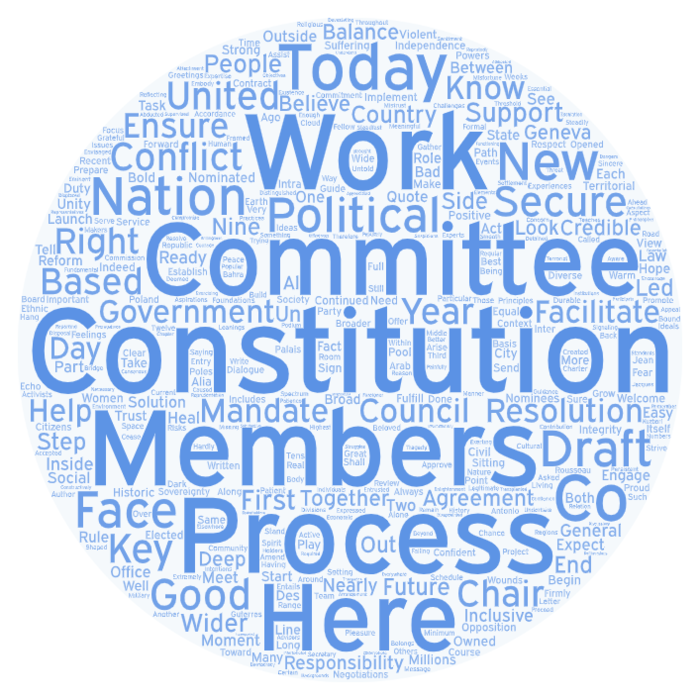 On Friday, Pedersen announced that agreements had been reached on an agenda, as well as a code of conduct and the membership of a smaller 45-member drafting body. This is the group that began the more detailed negotiations today.