A six-month IRIN investigation into Berlin shelters reveals that female refugees in Germany have grossly inadequate protection from sexual and gender-based violence. Minimum standards are not legally binding and rarely enforced or monitored, while dozens of women interviewed said they had experienced sexual harassment, a lack of support, and reported living in fear of being assaulted.

One night last year, Sally Abazeed, a 20-year-old refugee from Syria, was desperate to get out of the stuffy, crowded shelter where she was staying in Berlin. So, when a security guard asked if she wanted to accompany him to get a kebab, she accepted. “Someone to protect me,” she thought. But on the way to the shop, the man started flirting: “Tell the LaGeSo [Regional Office for Health and Social Affairs] you’re going to move in with me,” he said, grabbing her hand and kissing it. For days afterwards, he pestered Sally for her phone number.

It wasn’t the first time since fleeing Damascus alone, at the age of 19, and travelling to Germany via the so-called Balkan route, that Sally had experienced unwanted advances from men. After arriving in Berlin in the summer of 2015 and being housed in a former airport called Tempelhof, she began suffering from frequent panic attacks, which left her immobilised and unable to speak. She told IRIN that male residents and security staff often took the opportunity to hug and touch her while pretending to comfort her.

Sally had arrived in Germany at a time when the authorities were faced with the monumental task of accommodating and feeding thousands of newly arrived asylum seekers every day. In the scramble to convert warehouses and sports halls into emergency shelters, little thought was given to ensuring female refugees were protected from sexual and gender-based violence and harassment.

In March 2016, a report by the Women’s Refugee Commission sounded the alarm that hastily established refugee shelters in Germany and Sweden were leaving women and girls vulnerable to “rape, assault, and other violence”. The report found that many shelters lacked separate sleeping areas or bathrooms for women and children. It also identified a lack of medical and psychosocial services to support women who had experienced gender-based violence.

Subsequently, in June 2016, the German government introduced  minimum standards for the protection of women and children at refugee shelters. The guidelines include a strict code of conduct for shelter staff, as well as training in violence recognition and prevention, and the setting up of independent complaints bodies. Although the standards have been incorporated into some of the newer contracts between local authorities and shelter operators, they are not legally binding and this investigation found they are rarely enforced or monitored and have done little to improve the safety of female residents.

Currently, more than 31,000 asylum seekers and refugees are living in emergency and community shelters in Berlin, waiting for more permanent housing. There are no records of how many residents are female, but in 2016 just over a third of all asylum applications in Germany were made by women.

Over a six-month period, IRIN spoke to dozens of women like Sally who reported suffering from sexual harassment, unwanted touching, kissing, and being stalked while living in emergency shelters.

Many social workers and volunteers working in the shelters, contacted online, also described them as unsafe for women. “One night a man managed to get into a woman’s room and demanded sex,” wrote one volunteer. The majority of shelter workers reported that they had not been taught how to handle such situations, despite the fact that appropriate training is supposed to form part of the minimum standards.

Scared to go to the toilet

At night, the volunteers and social workers go home, leaving behind only security guards. But many women view the guards as a threat rather than a form of protection. Even in shelters with separate rooms for women, they said they did not feel safe, since security workers and shelter managers have master keys that give them access to all the rooms. The official reason for this is fire safety, but women said the keys are used to enter rooms even when there is no immediate danger.

All of the women IRIN spoke to were scared of going to the toilet at night. Zina, 49, a resident of the Tempelhof shelter said: “I often have strong pain because I do not use the toilet at night. I am frightened.” Both Zina and Sally felt intimidated by guards who made inappropriate noises or gestures when they passed them on their way to the toilets. On one occasion, a guard even followed Sally in.

Other women interviewed, such as Marziye Hosseini, a 24-year-old from Afghanistan, said they lived in fear of their fellow male residents. Marziye divorced her abusive husband after arriving in Berlin and now feels she and her young daughter have no protection in the shelter where they stay in Treptow-Köpenick district. One morning, an Afghan man entered her room and attempted to rape her. She managed to fight him off and did not report the incident to the police or shelter staff.

Despite the multiple accounts of sexual harassment and abuse, the Regional Office of Refugee Affairs (LAF) is confident there is no significant problem. “After countless conversations with shelter managers, I can assure you that there is no unusual occurrence [of sexualised violence] reported from emergency or community shelters,” Sascha Langenbach, LAF’s spokesman, wrote in an email. His perception is backed up by very low numbers of police reports. In all of 2016, Berlin police registered only 10 cases of “crimes against the sexual freedom of a person” involving women living in refugee shelters.

But according to Claudia Kruse, a therapist at the Zentrum für Ueberleben (Centre for Survival), which provides counselling services to migrants and refugees, as well as several women’s organisations IRIN spoke to for this investigation, police statistics are an unreliable measure of the true extent of the problem.

“We can assume that a very, very high number of sexually motivated attacks go unreported,” said Kruse, who added that many of the women she counsels report having been groped and harassed at the shelters.

Language barriers and a lack of information prevent many women from seeking justice or treatment for sexual assaults. To report a crime to the police, a woman first has to be aware of her rights. She then has to leave the shelter and find an interpreter. For Sally, who speaks English but not German, it was a struggle to find support. “I did not know the law very well,” she said.

In her case, the unsafe conditions and constant harassment at the Tempelhof shelter led her into an even more dangerous situation. Desperate to find somewhere else to stay, she asked for help via a Facebook group for secular Syrians. A man invited her to come to Hamburg to stay with a female friend of his. But when Sally arrived, he led her to his own house and raped her.

When she reported the rape to the police, she was told there was not enough evidence a crime had been committed. Instead of referring her to a help group or therapist, they sent her back to Tempelhof. 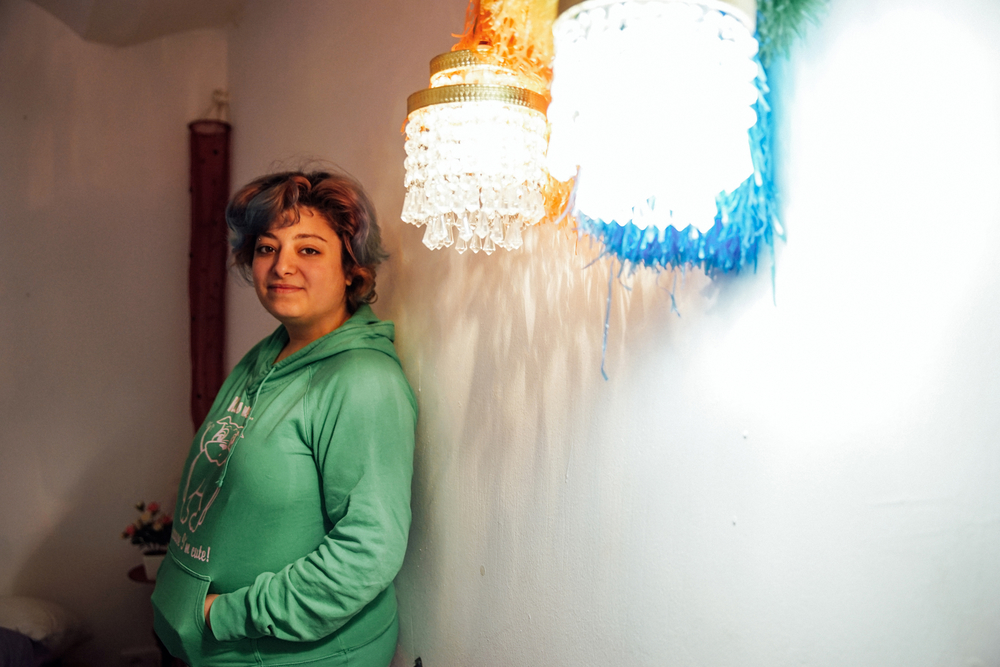 Alicia Kassebohm/IRIN
Sally has now moved out of the shelter, but is still affected by her experiences there

Organisations for survivors of sexual and domestic violence have established mobile help units aimed specifically at refugees, but their reach is limited. One of them, Lara, provided counselling for 190 women between October and December 2016, of which two thirds reported suffering from sexual violence since arriving in Germany, according to Elnaz Farahbakhsh, one of Lara’s social workers. Another unit established by BIG (the Berlin initiative against violence towards women) consists of only one social worker, who, between November and December last year, spoke to 84 refugee women who had suffered from either domestic or sexual violence in the shelters.

Despite the high demand for such services, there is little support to expand them or even continue funding them. The money for Lara’s mobile unit, provided by local government, runs out at the end of 2017. Access by women’s organisations to the many shelters that are run by private companies, contracted by the government, is also a problem.

Regular monitoring of the minimum standards is supposed to be carried out by the LAF, but in the case of one privately-run centre in the east Berlin district of Friedrichshain, the shelter manager was harassing female residents for six months, even attempting to pull down their headscarves, but was not removed. Only after numerous official complaints by a female doctor and a volunteer organisation did the LAF start making unannounced visits to the shelter, after which the manager resigned.

Women’s organisations such as Lara and BIG argue that more women-only shelters are needed, or, even better, individual lockable housing units. In addition, there is an urgent need for women who have already been victims of sexual assault or harassment to receive psychological help. A study published by the psychiatrist Meryam Schouler-Ocak from Berliner Charité found that one in 10 refugee women in Germany have suicidal thoughts, while fewer than one in 10 have the opportunity to talk to a therapist. The study did not link the high rates of depression to specific causes such as sexual harassment, but all of the women IRIN interviewed suffered from depression and some had thought about suicide or even attempted it.

By the time Sally finally received therapy from Lara’s social workers, she had already tried to kill herself three times. Today, she lives in a room in a shared flat and is taking German classes and trying to find an internship in social or care work. With the help of antidepressants and therapy she is slowly recovering, but her experiences at the shelter still live with her. “The worst for me is that I keep thinking it was my fault,” she said.

Inanna Alassar contributed to this story. This investigation was supported by a Netzwerk Recherche grant.