Braving social stigma, many Palestinians in East Jerusalem have in recent years applied for Israeli citizenship to escape insecurity and the endangered status of their residency under Israeli occupation. But citizenship alone does not always save them from inequality and uncertainty.

According to data the International Crisis Group (ICG) obtained from the Israeli Ministry of Interior, some 7,000 Palestinians in Jerusalem applied for Israeli citizenship between 2001 and 2010, two-thirds of them between 2008 and 2010 alone.

According to a December 2012 ICG report, a total of 13,000 Palestinians in Jerusalem have Israeli citizenship, although this number likely includes residents who came into town from other parts of Israel.

The major reasons behind the citizenship applications are fears of losing residency or access to Jerusalem, the wish to travel more easily and the desire to grant a better future for one’s children, according to Palestinians interviewed, a community activist and the ICG report.

“Most Palestinian residents of Jerusalem, regardless of whether they approve or disapprove of the trend, believe that the numbers applying for citizenship are likely to grow,” ICG writes, noting that other researchers have reported much higher numbers from the Ministry of the Interior. (For instance, journalist Danny Rubinstein was told that 12,000 Jerusalemites had applied for citizenship in 2008-2009 alone, ICG said.)

An Israeli foreign ministry spokeswoman, Ilana Stein, said that everyone who meets the criteria - being a documented permanent resident of Jerusalem with no criminal record - can apply for citizenship, but that “security concerns can arise on individual cases”. According to the ICG report, about one-third of applicants were rejected.

Palestinians’ permanent residency status in Israel is conditional on proving their “center of life” lies within the Israeli-defined municipal boundary of Jerusalem, a precarious status that can be revoked under many circumstances, including living outside the municipal boundary for extended periods of time. Between 1995 and 2000, Israel revoked the residency status of some 3,000 East Jerusalem Palestinians in what the UN Office for Coordination of Humanitarian Affairs called “quiet deportation”. It revoked another 7,000 Palestinian Jerusalemites’ IDs between 2006 and 2011, which contributed to the subsequent upsurge in applications for citizenship.

Jerusalem mayor Nir Barkat expressed sympathy for such a plan in 2011, suggesting that parts of municipal Jerusalem that lie on the Palestinian side of the security barrier should fall under the Palestinian Authority’s jurisdiction rather than that of the municipality. 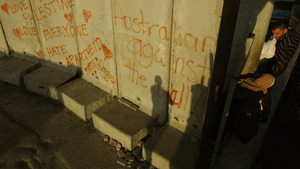 A 2011 survey by the Palestinian Center for Public Opinion found that nearly half of East Jerusalemites would prefer to become citizens of Israel rather than a new Palestinian state, “casting fresh doubts on the official Palestinian claim to the city”. “Even more remarkably”, the survey found, 42 percent said they would actually move to a different neighborhood if necessary to remain under Israeli rather than Palestinian authority. However, observers say such data should be treated with caution, given that Palestinian applicants may fear losing their residency if they do not show support for Israel, and given the overall low, if increasing, number of applicants.

Anwar’s choice remains a taboo for most Palestinians.

“When I applied some 10 years ago, some of my relatives cut all relations with me,” he said, lowering his voice whenever speaking directly about his application during an interview in a restaurant in East Jerusalem. “My uncle got angry and asked, ‘Did you forget to love your city and your country?’”

“Some people believe that in order to stay in their city, it is safer to get Israeli citizenship,” said Xavier Abo Eid, a spokesman for the Palestinian Liberation Organization (PLO) in the West Bank’s capital Ramallah, in the Occupied Palestinian Territory (OPT). “But Israel aims at turning occupation into effective annexation, and that includes the people living in it,” he protested. “And Israel is doing everything possible to push Palestinians outside Jerusalem. They have suffered from Israeli policies of ID revocations, home demolitions, evictions and settlement construction.”

"If things don’t change soon, going abroad will be the only option left"

Israel officially considers Jerusalem its “united capital” and regularly denies the discriminatory impact of its policies concerning the Palestinian population in East Jerusalem. Jerusalem mayor Barkat said in 2010, a year after the wave of ID revocations: "Never was Jerusalem as open for people to practice their religion freely as it is today."

The PLO has produced an internal policy paper on the citizenship applications, but has not released it publically.

Anwar said he used to face time-consuming visa procedures every time he wanted to visit family abroad using his Israeli travel permit. Before he was granted citizenship, he had to submit employment records and official invitations before every trip. “Now, I just get on the plane.”

But becoming an Israeli citizen has not protected him from discrimination. The Israeli passport may make it easier to travel, Anwar said, but “I am still treated as a potential terrorist, while Jewish citizens just pass.”

Despite the citizenship, he still has not succeeded in getting a permit to build new rooms in his home. Rights groups say those Palestinians living in in East Jerusalem struggle to get building permits, while Jewish settlements on the perimeter of the city are growing, cutting Palestinian East Jerusalem off from the rest of the West Bank. One such settlement is Giv’at HaMatos; its build-up would cut off Arab neighbourhoods in southern Jerusalem, like Beit Safafa and Sharafat, rendering them “Palestinian enclaves”, the ICG said, surrounded by settlements that, according to an international fact-finding mission commissioned by the UN Human Rights Council, adversely affect Palestinians’ freedom of movement, natural resources and safety.

Inequalities between Palestinian and Jewish citizens of Israel span many fields of public life, and are enshrined in parts of the legal system and government practices. Some 30 Israeli laws specifically privilege Jewish over Arab Israeli citizens in immigration rights, naturalization, and access to land and employment, among other things.

The inequality has even driven some Palestinians in Israel - including some with Israeli citizenship - to leave for Ramallah, often in search of an Arab-speaking, culturally Palestinian environment.

“If things don’t change soon, going abroad will be the only option left,” Anwar said.