Since the Black Lives Matter movement re-emerged in 2020, there has been a lot of talk about decolonising aid but not as much clarity about what it means in practice.

While ideological differences in the debate remain entrenched, many initiatives are underway to further the decolonisation agenda in practical ways.

If you’re working on interesting decolonisation initiatives we’ve missed, please add them to this open database for others to read about.

Organisations like Mama Cash, the Decolonizing Wealth Project, Thousand Currents, Global Giving, Give Directly, the African Visionary Fund, and the Trust-Based Philanthropy Project offer more participatory ways of channelling funding to grassroots organisations. They aim to rebalance the power between funder and grantee, invest in quality relationships, and place greater trust in those doing the work. Similarly, in the humanitarian sector, the Survivor and Community-Led Crisis Response approach – developed by the Local to Global Protection Initiative and used in East Jerusalem, Haiti, and Ukraine, among other places – seeks to give small cash grants to community groups to design and implement their own projects.

IPAS, a global reproductive health and rights organisation, has developed a roadmap to transform itself into a networked global organisation with authority, power, and leadership dispersed and shared across a network of offices rather than centralised in the United States. For its part, CARE has shifted from being a group of 10 members from the Global North to a confederation of 21 organisations, including eight in the Global South. The Start Network is shifting its membership from a centralised model to a series of national and regional hubs.

Outlined by USAID Administrator Samatha Power in November 2021, this new policy seeks to: attract people from more diverse backgrounds, including through a new Chief Diversity Officer; be more focused on the voices and needs of the most marginalised; and listen more to its partners in the countries where it works. It aims to provide 25 percent of its financial assistance to local partners within four years, and to spend at least half of its money on programmes where local communities co-lead the project, set priorities, drive implementation, or evaluate its impact. The CEO of a philanthropic foundation described “USAID taking up the localisation banner” as one of the biggest recent successes of the localisation agenda, though observers are already wondering what will happen to the commitment when Power moves on.

DA Consulting, run by Somali-American aid worker Degan Ali, has created a framework to help international NGOs understand how to “get out of the core business of service delivery” and transition towards a solidarity role that advocates for changes to the foundational problems in geopolitics that make aid necessary in the first place. The framework guides NGOs through changes to their resources, finances, programming, and executive leadership. Ali is now considering creating a similar framework for donors. Meanwhile, the Start Network has launched its own “anti-racist and decolonial framework”. Developed by Filipino aid worker Arbie Baguios, the founder of Aid Re-imagined, it involves managing risk differently, providing interpretation at events, and defining success from the affected community’s point of view. 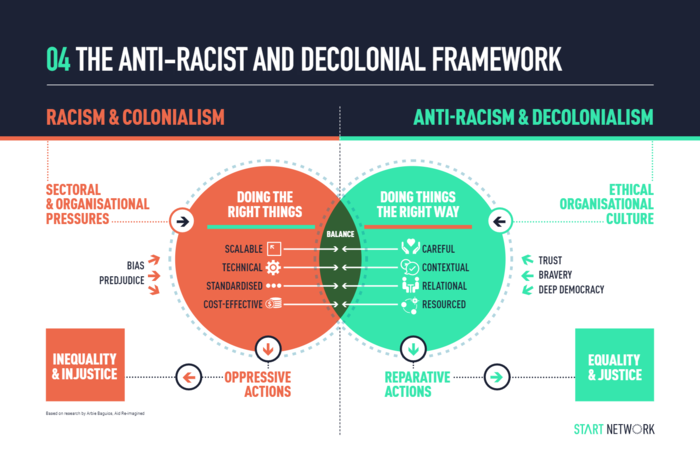 A framework developed to help the Start Network address racism and colonialism in its work.

Still in the works, this index – being built by a voluntary collective of Black, Indigenous, and people of colour – claims to be the first accountability tool for racial equity within the global development sector. After inviting aid organisations to submit their data to gauge how they’re doing, it seeks to be a barometer of how well international NGOs are measuring up against 11 indicators of racial equality, based on a mapping of community definitions around the world. Its first iteration aims to be live by mid-2023 (Listen to one of its co-founders on this episode of the Rethinking Humanitarianism podcast).

The Good Humanitarian Donorship grouping of 42 key government and multilateral donors discussed decolonising aid at their high-level meeting in December 2021 – the first time the topic was raised at a humanitarian donor forum. The International Development Innovation Alliance, which brings together eight bilateral agencies and three foundations, also discussed the topic at a December meeting. Many foundations and governments have been having discussions internally too. The Belgian Ministry of Foreign Affairs launched a project to map the colonial aspects present within the institutional structures, processes, and cultural behaviours of Belgian development practice. Finland and Denmark have recently strengthened requirements for the NGOs they fund to demonstrate how their projects build local capacities and how affected people are included in planning and implementation (others, like Norway, have long had this requirement). The UK’s Foreign Commonwealth and Development Office’s Rapid Response Facility now is now instructs grantees to include overhead costs for their local partners.In their budgets, recognizing that they too need to finance the running costs of their organisations.

Reimagining the identity of an international NGO

Many international NGOs are rethinking their roles in the humanitarian food chain, and more and more thought is going into how the role of “intermediaries” should evolve. For CARE Australia, it’s about being a broker rather than a doer. For Oxfam GB, it’s about shifting towards a global social justice network (as their CEO outlined in this podcast). The rethink has even led to a new acronym: RINGO (Re-Imagining the INGO). Aid agencies are also considering their composition and staffing. Médecins Sans Frontières led a consultation process during which thousands of staff discussed "The MSF We Want To Be"; while the International Committee of the Red Cross held town halls in different languages for staff to express their experiences of racism.

Spearheaded by Degan Ali, CEO of Adeso, and Mary Ana McGlasson, director of the Centre for Humanitarian Leadership, this informal grouping brings together the CEOs of several international NGOs for frank conversations about their organisations’ role in maintaining neocolonial structures in the global aid system and strategies towards decolonisation. They will soon be announcing a pledge that looks at three specific areas: visuals (ie. poverty porn), language (ie. disempowering vocabulary), and partnership. Oxfam, one member of the collective, recently published its strategy for shifting power, outlining how its commitment to decolonise will be integrated into planning processes and shape: how they recruit and support diverse talent; how they tell stories; the way they fund Southern partners; and how they hold themselves accountable.

In 2020, the British anti-poverty charity Comic Relief announced it would stop raising funds by sending celebrities to African countries: “African people don’t want us to tell their stories for them,” its co-founder Lenny Henry said. In 2021, Africa No Filter published a handbook for the development community with eight tips for more ethical storytelling about the continent. The Conrad N. Hilton Foundation is funding the development of a toolkit on improving storytelling practices in the social impact and philanthropic sectors, which is being produced by M&C Saatchi World Services. And as above, many NGOs are changing the way they tell stories about the work they do.

Getting out of the way

After watching “international organisations capitalising on a crisis” when Tropical Cyclone Pam hit Vanuatu in 2015, the Australian Red Cross shrank its international humanitarian operations significantly, laying off 100 of its 140 internationally focused staff to make room for local leadership. In 2020, Oxfam began withdrawing from 18 countries, in part to “shift power closest to those we exist to serve”. Ignacio Packer, the executive director of the NGO consortium ICVA, has announced he’ll be stepping down in 2023 to make way for new leadership from the Global South. In an interview with the Rethinking Humanitarianism podcast, UN Under-Secretary-General for Humanitarian Affairs Martin Griffiths also expressed hope he would be the last Brit in the job. The composition of “Humanitarian Country Teams”, the main inter-agency coordination bodies in crises, has also shifted in recent years to include much more local representation.

While some of these efforts have been underway for years, the COVID-19 pandemic and the war in Ukraine have both created opportunities for acceleration. COVID was arguably not as transformative as expected, but the humanitarian response in Ukraine has shown some signs of a more “decolonised” approach. The Disasters Emergency Committee, a fundraising network for UK charities, has allowed recipients of its funds to work with Ukrainian partners without doing their own due diligence (a practice known as “due diligence passporting”); and a collection of international charities has partnered with the UK Humanitarian Innovation Hub and Ukrainian organisations to set up a localisation learning and innovation hub in Ukraine. In what would be a precedent-setting move, the UN’s emergency aid coordination body, OCHA, is also considering giving funding from its pooled fund directly to volunteer organisations. We’ll be watching to see if these new ways of working last beyond this particular crisis.

See the results from our 2021 questionnaire for more on what aid agencies are doing at an institutional level to improve diversity, equity, and inclusion in their institutions.

And if you’re working on interesting decolonisation initiatives, please list them in this open database for others to read about.

For more on this topic, check out:

Our CEO’s reflections on the chasm between policymakers and civil society leaders when it comes to decolonising aid.

A reading (and listening and viewing) list curated by The New Humanitarian and the Center for Transformational Change.