The politicians arrived in white Toyotas to a red-carpet welcome. Their supporters got caps, flags, and embroidered shirts. The one thing missing at the ruling party’s first election campaign rally in the Burundian capital, Gitega, last month: personal space.

Millions of Burundians are gearing up to vote in a divisive general election next week, but there are growing concerns over the government’s response to the coronavirus pandemic as mass rallies draw thousands into jam-packed public spaces across the country, and hospital workers speak of a spike in cases.

Though just 27 people have been confirmed with COVID-19 so far in Burundi, doctors and nurses in Bujumbura – the country’s largest city – told The New Humanitarian they are treating many more patients with the virus, while aid officials said the World Health Organisation has been sidelined from participating in the response. The WHO’s representative in Burundi was reportedly declared persona non grata today.

The small East African country has been wracked by political violence since its last election in 2015 saw President Pierre Nkurunziza run for a disputed third term in office. Crackdowns on opponents following protests and a failed coup left more than 1,000 people dead and sent hundreds of thousands fleeing to neighbouring countries, where most remain.

Critics say the ruling party’s response to COVID-19 is drawn from a well-honed playbook: in the months leading up to voting, authorities have downplayed various humanitarian problems – from a malaria epidemic to food shortages – and glossed over rising political violence in the countryside.

A grenade attack on a bar in Bujumbura on Monday has deepened tensions ahead of the polls. And with clashes between members of the ruling party and opposition reported across the country, many residents fear a new outbreak of violence is coming.

“Since 2015, we have seen a significant increase in politically motivated killings and violence,” said Lewis Mudge, Central Africa director for Human Rights Watch. “These abuses continue today and have created a highly charged political atmosphere.”

Many Burundians had expected Nkurunziza – a former rebel leader – to stand for a fourth term, but in January the ruling CNDD-FDD announced Evariste Ndayishimiye, the party’s secretary-general, as its candidate.

Ndayishimiye is seen as a reformist by some analysts and diplomats, who hope he will mend ties with the international donors that pulled bilateral assistance following the violence of 2015. Others doubt the former military general can change an increasingly authoritarian party that has spent the pre-election period clamping down on dissenters – and some say is now downplaying a global pandemic.

While much of the rest of the world has limited social gatherings to less than 10 people, mass rallies across Burundi have attracted tens of thousands of people of different political stripes in recent weeks.

“If we have to die to sink the ship that rules us, I wouldn't hesitate.”

Attendees told TNH they joined for different reasons. School teacher Jean-Marie Baragafise said he was repaying the ruling party for helping him find work. Opposition supporter Margueritte Hajayandi said changing the government was more important to him than avoiding COVID-19.

“If we have to die to sink the ship that rules us, I wouldn't hesitate,” Hajayandi said.

The government has encouraged people to continue as normal, assuring citizens the virus would not affect the country like others because it “has put God first”. In March, Belgian- and French-run schools were criticised for closing their doors, and residents were warned not to take preventative measures ahead of the authorities. 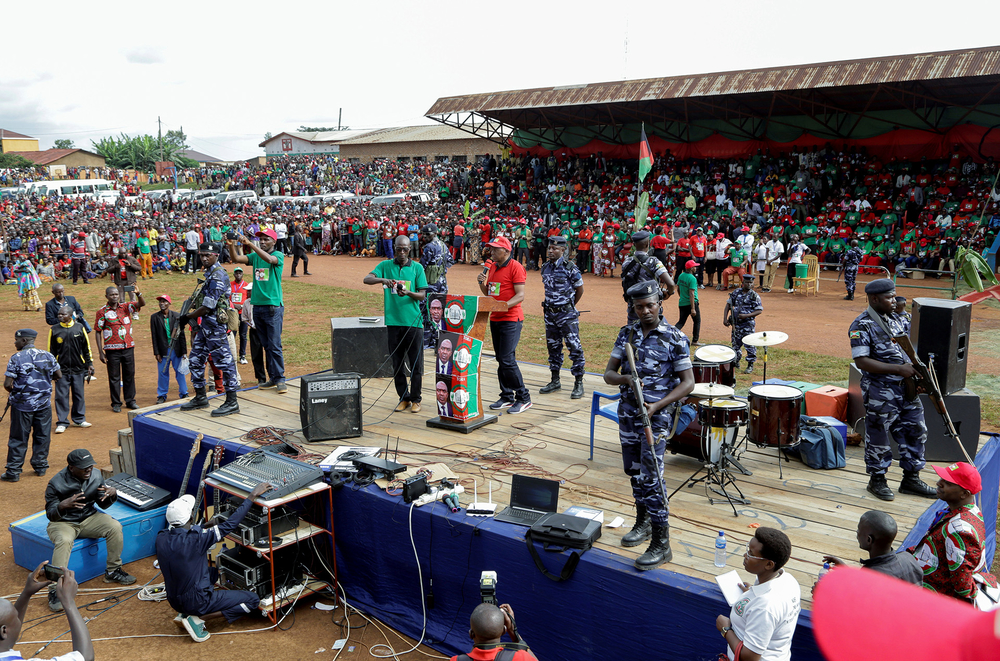 Many are now paying a price for the lack of control measures, according to a nurse who works at one of the main hospitals in Bujumbura and a doctor on the national coronavirus taskforce, both of whom spoke to TNH on condition of anonymity.

The doctor said there are at least 10 times more confirmed cases than the government has made public, and that senior medical staff in Bujumbura have been out campaigning for the ruling party rather than coordinating the response. The nurse said some patients have escaped medical facilities without proper follow-up.

“The [authorities] are so busy with the election campaign, [they] do almost nothing to coordinate the fight against the expansion of COVID–19,” said the nurse.

A senior foreign official and a humanitarian worker – both based in Bujumbura and speaking on condition of anonymity – said the government has also sidelined the WHO from participating in coronavirus response efforts.

The humanitarian official said the WHO and the Red Cross had traced and tested 62 people in April and found five with COVID-19 symptoms. The government was shown their report, but later announced that only 34 people were traced and tested – and all were negative. The ministry of health has since conducted contact tracing on its own.

In late April, the WHO’s top official in Burundi sent a note – seen by TNH – to other health organisations in the country, noting the “immediate” need to “write a letter to the government on the necessity of access to information of cases and contacts for COVID-19”.

Contacted by TNH, the WHO said it was once asked to train local health workers in Burundi in identifying cases and contact tracing, and stands ready to do so again if requested. The ministry of health did not respond to requests for comment.

Prior to COVID-19, critics accuse the authorities of using similar denial tactics to bury other humanitarian problems in Burundi.

Last year, the government refused to endorse a UN food security report that found that more than 1.6 million people were in immediate need of assistance, and failed to declare a malaria outbreak an epidemic despite nine million people contracting the virus in a country of roughly 11 million.

The government has also long denied that there is a political crisis, repeatedly declaring the country safe to hundreds of thousands of Burundians still living in exile in neighbouring countries and making periodic threats of forced repatriation.

Most of those who fled in 2015 have remained in exile, however, and those who have returned often face harassment from the ruling party’s youth wing – the Imbonerakure – who consider them traitors or associate them with the opposition, according to refugee rights groups.

“The apparent reluctance of many Burundian refugees in Tanzania to sign up for ‘voluntary repatriation’ speaks to their concerns about the uncertainty in the lead-up to elections – uncertainty that is no doubt accentuated by the potential spread of COVID-19," said Jeremy Taylor, an East Africa analyst for the Norwegian Refugee Council.

Most international aid groups had their work suspended for three months in late 2018 after failing to comply with a new law requiring them to provide information on the ethnicity of local staff – a troubling ask in a country with a history of ethnic conflict.

NGOs thought the issue was resolved after some complied, found a way out, or left the country altogether, but the government made a renewed push for information in February, which rights organisations condemned.

“I live in a tent with my children, without a toilet, shower, or other place to relax. I ask to be accommodated in good conditions.”

Floods, landslides, and excessive rainfall all contributed to a poor harvest, just as the UN’s food agency said a “politicised environment” during the election period could reduce humanitarian access.

Displaced people affected by the floods in April say they still don’t have enough food, clothes, or other basic necessities. Overflowing toilets have contaminated flooded areas and drinking water.

“I live in a tent with my children, without a toilet, shower, or other place to relax,” said Marie-Claire Ntanoga, a flood survivor who spoke to TNH last week. “I ask to be accommodated in good conditions.”

Monday’s grenade attack and clashes between rival political parties have raised fears of further displacement, although, given the level of fear that now prevails across the country, few analysts of Burundi expect a similar level of chaos to 2015.

And, if there is civil unrest, some say the government will have a ready-made excuse to clamp down: COVID-19.

“After May 20, they’ll say… ‘we must protect people’,” said Maggie Barankitse, who runs a Burundian NGO, but is now living in exile. “The government will say: ‘corona is very dangerous, please lock down’.”