Hundreds of African refugees and asylum seekers have staged five months of sit-ins on the streets of the South African city of Cape Town to protest xenophobia and demand their relocation to any other country.

The stand-off has focused on the Central Methodist Church on Greenmarket Square, where some 700 refugees were given temporary sanctuary. But their numbers meant a makeshift camp quickly grew on the pavements outside the 19th century church – an area that is one of the city’s main tourist attractions.

Police enforced a court order on 1 March and evicted the demonstrators, including women and children, from the square. But protesters remain not only in the church; there is also now a new camp outside the District Six Museum – a building that commemorates forced removals under South Africa’s apartheid regime.

As the stand-off with the authorities continues, this briefing examines the rising tide of xenophobia in South Africa, a country that hosts over 260,000 refugees and asylum seekers – mainly from Somalia, Ethiopia, Zimbabwe, and the Democratic Republic of the Congo – and many more economic migrants.

What’s the protest about?

The protest action followed a surge in violence in September 2019 in Johannesburg and Cape Town, aimed almost exclusively at African nationals, that killed 12 people, displaced thousands, and left shops looted and vandalised.

The first sit-in began at the offices of the UN’s refugee agency, UNHCR, in St. Michael’s Mall in Cape Town at the beginning of October, with the protesters demanding to be relocated to a third country – not their country of origin or South Africa. It lasted for three weeks until it was chaotically broken up by riot police implementing an eviction order. 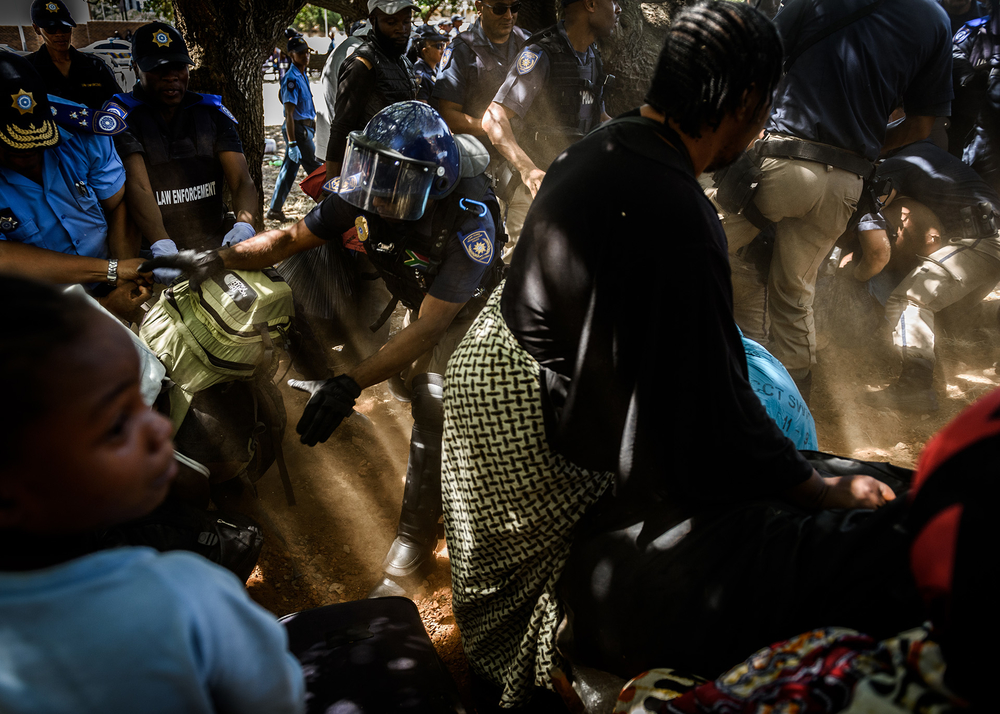 Guy Oliver/TNH
Scuffles broke out as the police cleared the refugees and asylum seekers from the grounds of St. Mary’s Cathedral in Cape Town, where they had sought refuge after being moved on from Greenmarket Square.

UNHCR had told the demonstrators it was “not in a position to resettle or relocate” them. Resettlement is a process that requires the third country to agree to admit the refugees and give them permanent residence.

South Africa once had one of the most progressive systems of refugee protection in the world. Asylum seekers can still technically live and work anywhere in the country until their refugee status is determined, and for the most part they are entitled to the same public services as South African citizens.

But the generosity has waned, and South Africa has moved to a policy of deterrence more in line with the rest of the world. Ever-growing wait times for status decisions, barriers to applications and renewal of permits, compounded by “endemic corruption and mismanagement in the Department of Home Affairs”, has transformed the asylum system into one that violates the constitution and international conventions, according to a 2018 report by the Helen Suzman Foundation.

A new Amended Refugee Act, gazetted in January, adds “severe restrictions [to] the refugee system”, notes the NGO Sonke Gender Justice. It limits rights to work and education, and hands the Minister of Home Affairs the power to remove any asylum seeker or refugee on ill-defined grounds of “national security”.

Congolese refugee Sandra Bahibitugu, a member of a refugee-founded non-profit, Women and Children at Concern, said the sit-ins were planned after she and colleagues attended an August 2019 parliamentary session and discovered the new law “means we have to have a government certificate to sell tomatoes in the street”.

How many African foreign nationals in South Africa?

Nobody really knows. According to the UN’s migration agency, IOM, there are around four million “international migrants” – migrants, refugees, and asylum seekers – in the country, out of an overall population of 56 million. The 2011 census put the figure at 2.2 million.

Despite all the headlines in Europe about Mediterranean crossings from Libya, 70 percent of migration in Africa is within the continent. South Africa, with its sophisticated economy, is an attractive destination, especially for countries in the sub-region, which share history and cultural links.

But South Africa imposes strict limits on formal immigration. A loophole is an asylum seekers permit, which allows you to work until your asylum claim is settled – which can take years.

Between 2006 and 2012, South Africa had the world’s highest number of asylum seekers – many of them Zimbabwean migrants fleeing the county’s economic meltdown. As a result, the asylum system “became contorted into something of a ‘catch all’ for generalised migration into South Africa”, a report by the Southern African Migration Programme noted.

This has deepened the antagonism felt by some South Africans.

How common is xenophobia?

What occurs in South Africa can more accurately be described as Afrophobia – an intolerance towards other black Africans.

It is manifest in the daily insecurity of living as a foreigner in the country, and the menace implied by the whisper of amakwerekwere – a pejorative label reserved specifically for African foreign nationals.

Afrophobia has gathered pace since the end of apartheid and the arrival of migrants from beyond the southern Africa region.

The first large-scale outbreak of violence was in 2008, beginning in Johannesburg’s Alexandra township. It quickly spread nationally. Officially, more than 62 people were killed, and hundreds of thousands displaced.

There have been further spikes, including in 2015 in the port city of Durban when five people died.

The All Truck Drivers Foundation, a local drivers association, went on strike demanding the sacking of all foreigners. “We are sick of you [foreign nationals] now, and we are not going to let you take our job [sic],” an ATDF statement said.

The government’s usual position is that violence is just crime related rather than a reflection of xenophobia.

Anti-immigrant sentiment is far from universal in South Africa. Many senior government officials spent the apartheid years in exile in African countries and, along with many ordinary South Africans, speak the language of pan-Africanism and ubuntu – a South African concept of humanity towards others.

There was also initial public sympathy for the protesters in Greenmarket Square, although that faded as the sit-in dragged on. 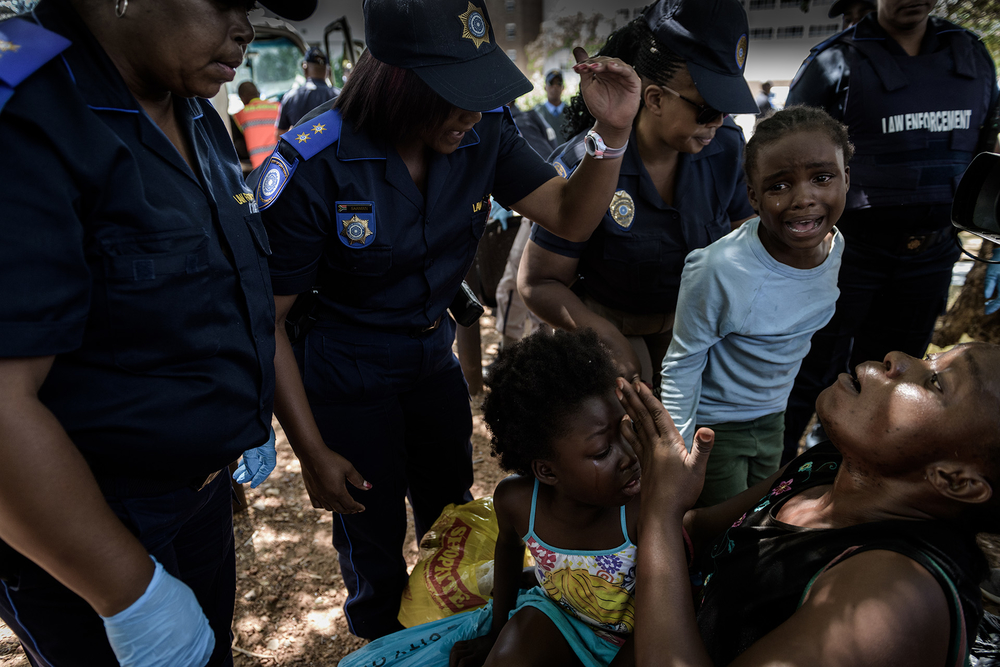 Guy Oliver/TNH
The police seized belongings, such as foam mattresses and blankets, and threw them on a waiting truck for disposal.

South Africa’s apartheid economic system has largely remained intact and the country remains the world’s most unequal society – compounded by a near 30 percent unemployment rate.

Successive governments largely failed to support micro-businesses – preferring to focus on the mainstream economy. With few other opportunities available, foreign African nationals flocked to the informal commercial sector, where they are a visible success.

The niche that foreign traders occupy in the townships and inner cities is a source of friction among both unemployed South Africans and local business people who regard them as unfair competition.

That sentiment was echoed at a political rally in March 2018 by President Cyril Ramaphosa.

“Everyone just arrives in our townships and rural areas and sets up businesses without licenses and permits,” he said. “We are going to bring this to an end. And those who are operating illegally, wherever they come from, must now know.”

Refugees and asylum seekers have proved a useful scapegoat for politicians seeking to avoid blame for performance failures, and some of the smears can be extremely crude.

Former Johannesburg mayor Herman Mashaba said in a 2018 tweet: “We are not going to sit back and allow people like you to bring us Ebolas in the name of small business. Health of our people first. Our health facilities are already stretched to the limit.”

Official programmes to combat xenophobia have been piecemeal.

After consulting with civil society groups, the government launched a five-year National Action Plan in 2019, but, according to Human Rights Watch, it “fails to address a key challenge fuelling the problem: the lack of accountability for xenophobic crimes.”