In the sweltering midday heat of the IDP Farmers’ Beans Market, Ladi Mattias haggled with a customer before finally agreeing, satisfied, to sell him a 100 kilogram sack of beans for 12,000 naira ($33).

The wad of money Matthias made would have been unimaginable five years ago, when she and her family first arrived in the village of Auta Balefi, destitute. They had fled deadly attacks by the jihadist group Boko Haram in the northeastern Nigerian town of Gwoza.

To scrape by, the 35-year-old mother of six sold vegetables door-to-door in Auta Balefi, 25 kilometres outside of Nigeria’s capital, Abuja. She earned hardly 400 naira ($1.1) a day.

“That time, I used to beg people for food,” Matthias recalled. “But look at me now, selling up to 30 bags of beans and having enough money to buy food and pay our children’s school fees.”

Behind that change is the determination of a group of men and women desperate to get back on their feet, and a supportive community.

“I used to beg people for food. But look at me now, selling up to 30 bags of beans.”

Like thousands of other internally displaced persons (IDPs) in Auta Balefi, Mattias relied heavily on the magnanimity of host communities when she arrived in late 2014. Some families offered her family shelter, food, and clothes, others gave them land to farm for free, or in exchange for a few bags of beans after harvest.

Cut off from the humanitarian hubs in Nigeria’s northeast where Boko Haram’s insurgency is still active, most displaced people now living in Abuja – around 10,000 people – are left to fend for themselves, with occasional support from churches and nonprofits.

The insurgency has killed some 35,000 people and displaced up to 1.8 million in Nigeria since 2009 – people who were traders, farmers, teachers, and mechanics, now forced from their homes, their lives turned upside down.

Mattias grew up on the land in Gwoza before the war, so when a policeman in Auta Balefi gave her family a single room and a two-hectare plot for free, she and her husband poured their energy into farming beans.

But without a market, they struggled. Exploited by middlemen, their returns were marginal at best.

Enter Philemon Ayuba, himself an IDP and former bean farmer and dealer from Gwoza.

“People were farming beans in large quantities, yet no buyers were coming here to buy them,” Ayuba, 42, said in his makeshift office at the market.

In August 2016, he asked all adult IDPs to attend a meeting in order to find a solution. He invited religious leaders as well as the village chief to offer their advice and blessings.

Three months later, the IDPs pooled resources to rent a tract of land and build sheds covered with corrugated roofing, naming the complex the IDP Farmers’ Beans Market. Ayuba and a few other traders contacted buyers they had known in the northeast, before the insurgency.

Traders and buyers flocked to the village, and the market boomed. More and more displaced people took to farming to meet the steady demand. A federal lawmaker representing the area in Nigeria’s lower parliament even gave them additional land to farm for free.

“We do not want to depend on anybody to survive, that is why we started this market,” said Ayuba, now the chairman of the market. He pointed out that the IDPs are even paying back the wider community, contributing the equivalent of $565 in taxes to the local government council along with the associated business opportunities that have sprung up.

Every week, four to five trucks – each carrying between 600 to 800 sacks of beans – leave the market, most headed to the southwestern city of Ibadan, 600 kilometers away. Other buyers come from the towns of Ogbomosho and Ilesha in the southwest and the southeastern economic hub of Onitsha.

“We really suffered a lot but God has helped us and changed our lives with this market,” said Mattias. 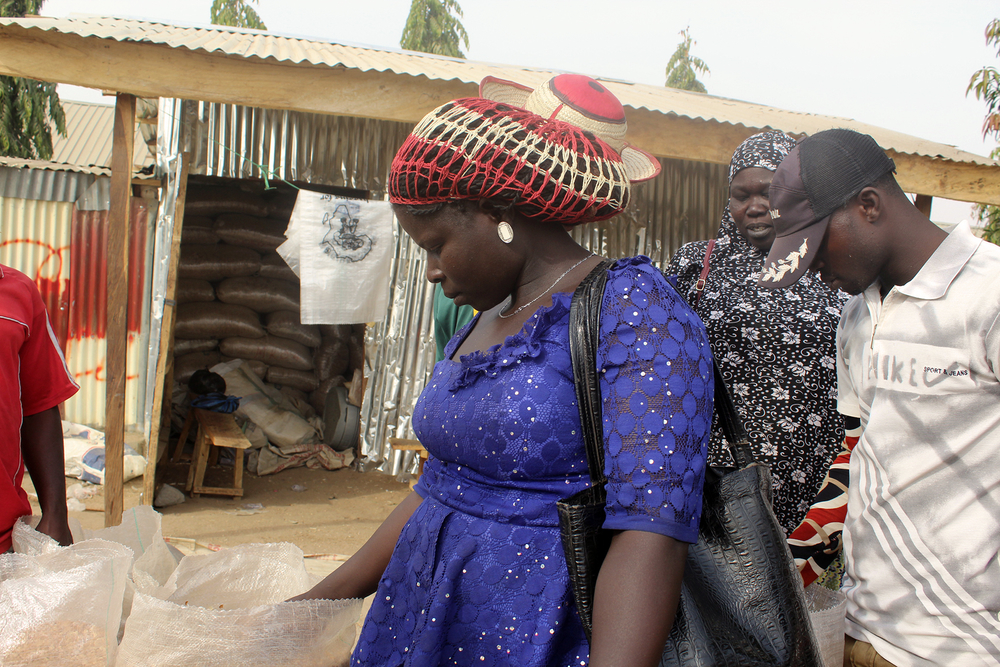 Linus Unah/TNH
Ladi Mattias inspects her stock before they are bagged and loaded onto a truck.

“This is not what we normally see at IDP camps”

When John Cardinal Onaiyekan, the Catholic archbishop of Abuja, heard of the IDPs’ project in Auta Balefi, he convinced Nigeria’s minister of agriculture and rural development, Audu Ogbeh, to visit.

“We are proud of you because this is not what we normally see at IDP camps,” Ogbeh said during his visit last December. “Instead of waiting for someone to bring you food, here you are producing food and making money. Here is a group of people who have lost their homes, working so hard and creating an industry, one of the biggest beans markets I have seen in Nigeria.”

Aweofeso Adebola, project manager of the nonprofit Young Shapers Club, which provides scholarships for displaced people in Abuja, agrees that the “story of the IDPs in Auta Balefi is unique and the most organised I have ever seen among IDPs who usually prefer to farm individually or work in pairs”.

Donor funding shortfalls – Nigeria’s 2019 appeal of $847 million is so far only 6 percent funded – limit the help that aid agencies can offer.

But a combination of a stagnant economy, inadequate start-up support and the constant challenge of being undercut in the market by more established businesses can strangle progress for new businesses.

That’s not the case in Auta Balefi, and the community happily trumpets their success. Word is spread to townspeople living in camps and among host communities in the northeast, encouraging them to supply what produce they can for traders like Mattias to buy and re-sell.

And the area around the market is benefitting, too. At the entrance, locals sell secondhand clothing, shoes, and bags. Motorcycle taxi drivers stand beside their bikes, their eyes straying in search of passengers. A few kiosks and small groups of women selling food on wooden tables are springing up around the market. Young men now work as porters or sew sacks for the produce, and local women get paid to clean the beans.

Last year, the 23-person committee the IDPs appointed to manage the market purchased the land it sits on, with money raised largely from fees the buyers and shop owners pay to the market. The group has also been able to help other displaced people; in January it sent clothes and 15 bags of maize flour to Maiduguri.

Some IDPs here have been able to purchase land and build apartments and stores. Some now own cars and motorcycles.

“I want to be selling at least 50 bags of beans every week,” she said with a smile. “I know if I am able to save more and get more people to work in my farm I can even buy a house next year.”