I first visited the Greek island of Lesvos in 2016. It was the tail end of the great migration that saw over a million people cross from Turkey to Greece in the span of a year. Even then, Moria, the camp set up to house the refugees streaming across the sea, was overcrowded and squalid.

I recently returned to discover that conditions have only become worse and the people forced to spend time inside its barbed wire fences have only grown more desperate. The regional government is now threatening to close Moria if the national government doesn’t clean up the camp.

Parts of Lesvos look like an island paradise. Its sandy beaches end abruptly at the turquoise waters of the Aegean Sea, houses with red tile roofs are clustered together in small towns, and olive trees blanket its rocky hills. When I visited last month, the summer sun had bleached the grass yellow, wooden fishing boats bobbed in the harbor, and people on holiday splashed in the surf. But in Moria sewage was flowing into tents, reports of sexual abuse were on the rise, and overcrowding was so severe the UN described the situation at Greece’s most populous refugee camp as “reaching boiling point”.

More than one million people fleeing war and violence in places like Syria, Iraq and Afghanistan crossed from Turkey to the Greek islands between January 2015 and early 2016. Over half of them first set foot in Greece, and on European soil, in Lesvos. But in March 2016, the European Union and Turkey signed an agreement that led to a dramatic reduction in the number of people arriving to Greece. So far this year, just over 17,000 people have landed on the islands. At times in 2015, more than 10,000 people would arrive on Lesvos in a single day.

Public health inspectors deemed the camp “unsuitable and dangerous for public health and the environment”.

Despite the drop in numbers, the saga isn’t over, and visiting Lesvos today is a stark reminder of that. Thousands of people are still stranded on the island and, shortly after I left, the regional governor threatened to close Moria, citing “uncontrollable amounts of waste”, broken sewage pipes, and overflowing rubbish bins. Public health inspectors deemed the camp “unsuitable and dangerous for public health and the environment”. Soon after, a group of 19 NGOs said in a statement that “it is nothing short of shameful that people are expected to endure such horrific conditions on European soil.”

The Greek government is under increasing pressure to house refugees on the mainland – where conditions for refugees are also poor – but right now no one really knows what would happen to those on Lesvos should Moria be closed down.

In some places in the north and the east, Lesvos is separated from Turkey by a strait no wider than 10 or 15 kilometres. This narrow distance is what makes the island such an appealing destination for those desperate to reach Europe. From the Turkish seaside town of Ayvalik, the ferry to Lesvos takes less than an hour. I sat on the upper deck as it churned across the sea in April 2016, a month after Macedonia shut its border to refugees crossing from Greece, effectively closing the route that more than a million people had taken to reach Western Europe the previous year.

The Greek government had been slow to respond when large numbers of refugees started landing on its shores. Volunteers and NGOs stepped in to provide the services that people needed. On Lesvos there were volunteer-run camps providing shelter, food, and medical assistance to new arrivals. But the EU-Turkey deal required that people be kept in official camps like Moria so they could be processed and potentially deported. 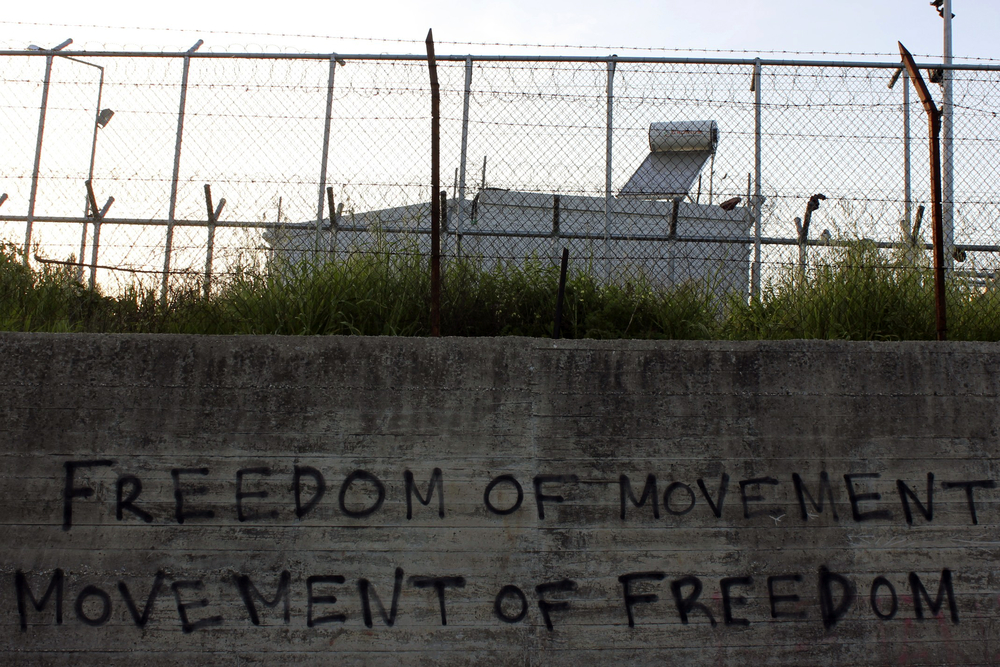 By the time I got there, the volunteer-run camps were being dismantled and the people staying in them were being corralled into Moria, a former military base. Once inside, people weren’t allowed to leave, a policy enforced by multiple layers of fences topped in spools of razor wire.

Moria had space for around 2,500 people, but even in 2016 it was already over capacity. While walking along the perimeter I scrawled my phone number on a piece of paper, wrapped it around a rock, and threw it over the fence to an Iranian refugee named Mohamed.

For months afterwards he sent me pictures and videos of women and children sleeping on the ground, bathrooms flooded with water and dirt, and people staging hunger strikes inside the camp to protest the squalid conditions.

“The image of Europe is a lie”

Two and a half years later, refugees now have more freedom of movement on Lesvos – they can move about the island but not leave it.

I arrived in Mytilene, the main city on the island, in August. At first glance it was easy to forget that these were people who had fled wars and risked their lives to cross the sea. People were queuing at cash points to withdraw their monthly 90 euro ($104) stipends from UNHCR, the UN’s refugee agency. Some sat at restaurants that served Greek kebabs, enjoyed ice cream cones in the afternoon heat, or walked along the sidewalks pushing babies in strollers next to tourists and locals.

The conditions on Lesvos break people down.

The illusion of normalcy melted away at the bus stop where people waited to catch a ride back to Moria. There were no Greeks or tourists standing in line, and the bus that arrived advertised its destination in Arabic and English. Buildings along the winding road inland were spray-painted with graffiti saying “stop deportations” and “no human is illegal”.

Moria is located in a shallow valley between olive groves. It looked more or less the same as it had two and a half years ago. Fences topped with razor wire stilled ringed the prefabricated buildings and tents inside. A collection of cafes outside the fences had expanded, and people calling out in Arabic hawked fruits and vegetables from carts as people filtered in and out of the main gate.

Médecins Sans Frontières estimates that more than 8,000 people now live in Moria; an annex has sprung up outside the fences. People shuffled along a narrow path separating the annex from the main camp or sat in the shade smoking cigarettes, women washed dishes and clothing at outdoor faucets, and streams of foul-smelling liquid leaked out from under latrines.

I met a group of young Palestinian men at a cafe. “The image of Europe is a lie,” one of them told me. They described how the food in the camp was terrible, how criminals had slipped in, and how violence regularly broke out because of the stress and anger caused by the overcrowding and poor conditions.

A doctor who volunteers in Moria later told me that self-harm and suicide attempts are common and sexual violence is pervasive. It takes at least six months, and sometimes up to a year and a half, for people to have their asylum claims processed. If accepted, they are given a document that allows them to travel to mainland Greece. If denied, they are sent to Turkey. In the meantime, the conditions on Lesvos break people down.

“Ninety-nine percent of refugees... [are] vulnerable because of what happened to them in their home country [and] what happened to them during the crossing of borders,” Jalal Barekzai, an Afghan refugee who volunteers with NGOs in Lesvos, told me. “When they are arriving here they have to stay in Moria in this bad condition. They get more and more vulnerable.”

Many of the problems that existed in April 2016 when people were first rounded up into Moria, and when I first visited Lesvos, still exist today. They have only been amplified by time and neglect.

Jalal said the international community has abandoned those stuck on the island. “They want Moria,” he said. “Moria is a good thing for them to keep people away.”