An imploding economy, marked by product shortages and hyperinflation, has driven almost half-a-million Venezuelans to live in Colombia. That number includes a 50-percent rise in the past three months alone as thousands of new migrants arrive each day in search of medicine, food, and work.

The influx is putting a massive strain on health and social services in Colombia, a middle-income country trying to recover from five decades of civil war with communist FARC rebels. It may be far from over.

The deepening political crisis and economic malaise in Venezuela means the Colombian government has to prepare in case the situation escalates and it is reportedly drawing up emergency plans to house up to a million Venezuelans in camps along the border.

According to Colombia’s Foreign Ministry, there are already 470,000 Venezuelans living in the country and that number sees a net increase of 2,000 to 3,000 migrants every day with more returning to Venezuela or using Colombia as a bridge to head to other South American countries. 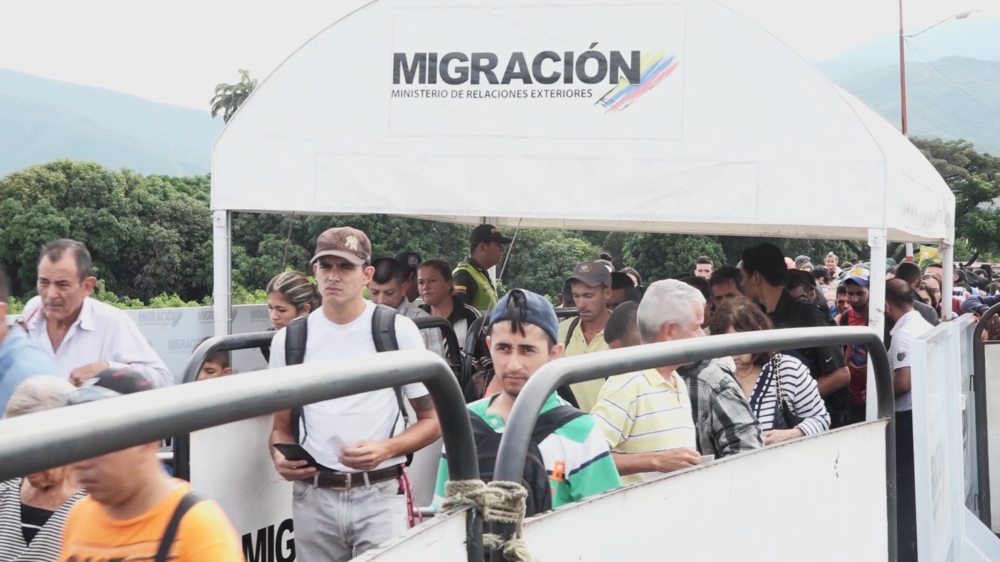 Manuel Rueda/IRIN
Every day thousands of Venezuelans walk into Cucuta Colombia, crossing a bridge that marks the border between both countries. Many decide not to return to their country

Yeiny Acevedo crossed into Cucuta, Colombia at five in the morning, hoping to get her two-month-old daughter vaccinated for tetanus and influenza. A few minutes later she arrived at the health post a few blocks from the border. But even at that early hour, two dozen or so Venezuelan women were already there, waiting to do the same.

“I never expected it would come to this,” Acevedo told IRIN.

Her hometown of Maracay is a major Venezuelan city and only 70 miles (110 kilometres) southwest of the capital, Caracas, but basic vaccines have become almost impossible to find anywhere in the country. So Acevedo made a 12-hour bus trip to the distant Colombian border to see if she could get some help.

“It’s a tough situation,” Acevedo said. “Any virus can be really dangerous for my child, because she has no vaccines.”

At La Parada neighbourhood clinic, where Acevedo went to get vaccines for her baby, three days of the week have now been set aside just for providing care to Venezuelans, part of a strategy to stop preventable diseases that are spreading in Venezuela – like diphtheria – from entering Colombia.

Nurses at the four-room clinic told IRIN they vaccinate up to 300 Venezuelan babies each week for tetanus, polio, diphtheria, hepatitis B, and influenza – as long as supplies last that is. “We get vaccines sent to us each month by the state government,” explained Candida Caceres, the head nurse. “But we usually run out by the third week of the month.”

The clinic isn’t the only overburdened service. Cucuta’s Erasmo Meoz University Hospital says it has accrued a debt of more than $3 million over the past two years from treating Venezuelan patients. The law says they must help anyone who arrives needing emergency treatment, but they only get reimbursed if patients have insurance, which most Venezuelans don’t.

Colombia’s health ministry approved additional funds of $1 million in April for border hospitals dealing with the Venezuelan influx, but the numbers have almost doubled since then and medical administrators in Cucuta say the money is insufficient and not being effectively administered.

“We still haven’t received a peso from the ministry of health,” Juan Agustin Ramirez, general manager at Erasmo Meoz University Hospital, told IRIN. Ramirez said he hoped that by lobbying the government and airing the problem on national and international media outlets, he could “shame” officials into providing more support.

“We’ve had to cut back on expenses,” he explained. “That means we are not investing in new medical equipment or hiring more personnel.” 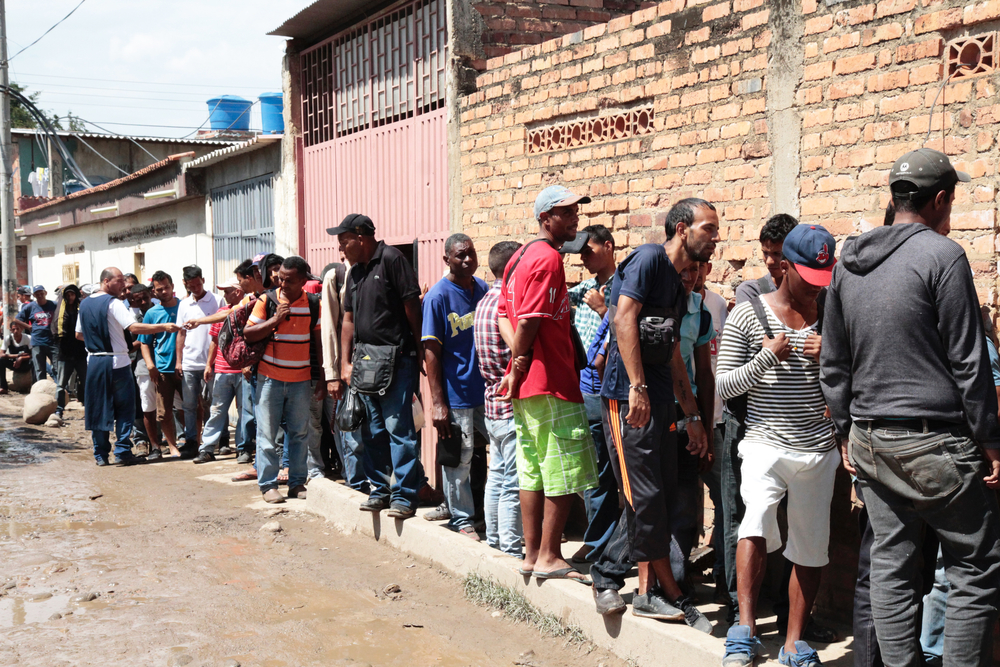 Many of the Venezuelan migrants entering Cucuta are desperately short on cash so they try to make some money by peddling cigarettes, coffee, water, and other merchandise on the city’s streets.

Yennis Jurado, a 33-year-old former construction worker from the Venezuelan city of Coro, told IRIN he made up to $5 a day selling fruits and vegetables smuggled across the border. It sounds a modest take, but Jurado said it would take him a month to earn a similar amount in Venezuela.

Immigrants who get regular jobs in Colombia can aspire to a minimum wage of around $250 a month, 50 times more than Venezuela’s minimum wage, which, depleted by the bolivar’s fast devaluation, currently amounts to only $5 a month.

“Many of us here are sleeping on the streets,” said Jose Barroso, a former supermarket supply manager from Caracas who now sells cigarettes on the streets of Cucuta. “But at least in Colombia we have the possibility to rise.”

The Colombian government has so far refrained from providing economic support to new arrivals, but the Catholic Church is helping with food and shelter.

In La Parada, the diocese of Cucuta is delivering 1,000 free meals a day to Venezuelan migrants, with food donated by parish members and local businesses. “It hurts us to see these people struggling for a plate of food,” said Father Hugo Suarez, who runs the dining hall. 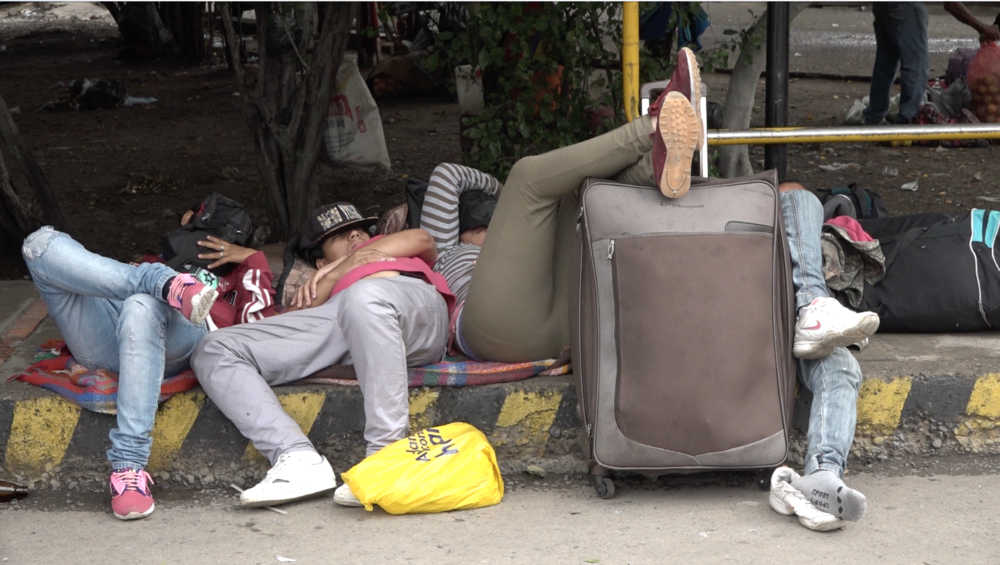 Manuel Rueda/IRIN
Many Venezuelans are short on cash, and they sleep on the streets while they make more money to go further into Colombia

Raul Gallegos, Venezuela analyst at global security consultancy Control Risks, predicts that Venezuelans will most likely continue to head into Colombia and other South American countries at a similar rate in 2018, especially as the economic prognosis remains dire.

Inflation in Venezuela is expected to climb from 700 percent this year to 2,000 percent next, according to International Monetary Fund estimates, while the economy is expected to shrink another six percent. Oil production – Venezuela’s main economic engine – has stagnated and Gallegos sees little cause for optimism as the national oil company PDVSA is being stacked with ruling party loyalists who have little experience in the industry.

The ruling party’s tight grip of the electoral system also means there’s next to no chance of a new government with different policies taking over. If President Nicolas Maduro is re-elected in the first half of 2018 in an election with no international oversight, as expected, it might encourage even more people to leave the country.

The Colombian government is preparing an emergency contingency plan, which, according to a recent report citing unnamed senior officials, includes provisions to host up to one million people in different camps along the border.

There are already signs that Colombia’s patience is wearing thin. “Their arrival complicates post-conflict recovery,” Foreign Minister María Ángela Holguín told a recent press conference. “We already have to expand health services, roads, and rural development schemes to many parts of the country (affected by the war) and receiving lots of Venezuelans generates an important additional cost.”

The Colombian government allows Venezuelans to stay in the country for 90 days without a visa – the standard policy for years. It has also permitted Venezuelans who have no criminal records to apply for a special two-year residence permit that lets them work and sign up for national health insurance. But the offer is only valid for Venezuelans who arrived in Colombia before July 28. Those who continue to stream in no longer get those benefits.

“I think we are far from a Turkey-style situation where massive numbers of [Syrians] are crossing the border at once with nothing,” Gallegos said. “But it is a steady flow of people that merits more attention.”

(TOP PHOTO: A Venezuelan migrant feeds her child at the Divine Providence Dining Hall in Cucuta, Colombia. The Catholic charity is feeding around 1,000 venezuelans each day.)