Last September, 193 member states attending the UN summit on refugees and migrants in New York committed to take in more refugees through resettlement and other legal avenues. Nine months later, and with more refugees than ever in need of resettlement – 1.2 million according to the UN’s refugee agency, UNHCR – countries have actually reduced the number of places on offer by 43 percent. While a record 125,800 refugees were resettled in 2016, only 93,200 places are expected to be made available this year.

Although UNHCR doesn’t assign blame to any one country, the reduction is undoubtedly the result of US President Donald Trump’s executive order capping refugee resettlement to the United States for fiscal year 2017 at 50,000, down from 85,000 the previous year.

While the United States has scaled back, Canada has taken the lead on a global initiative to use its private refugee sponsorship programme as the basis for promoting and supporting similar schemes in other countries.

The Canadian model taps into the desire of many citizens to do more to assist refugees, even as their governments may be wary of establishing resettlement programmes or expanding existing ones. Private sponsorship allows groups of individuals to finance the resettlement of individual refugees, or often a refugee family. Besides making a financial commitment, sponsors provide practical and emotional support as the new arrivals settle into their new homes.

Tens of thousands of individuals, community and church groups have brought more than 275,000 refugees to Canada since its sponsorship programme was launched in the late 1970s.

Is it catching on?

The Canadian government, together with UNHCR, the Open Society Foundations, the University of Ottawa and the Radcliffe Foundation, announced the Global Refugee Sponsorship Initiative (GRSI) on the sidelines of the New York summit, and officially launched it in Ottawa last December. Since then, there have been few updates, but according to Jennifer Bond, a professor at the University of Ottawa who chairs the GRSI: “There’s a very high level of interest. We’re working with 10 to 12 countries spread all over the world.”

But few of those countries have formally announced sponsorship programmes, let alone begun receiving refugees sponsored by individuals or community groups. Supporters of the initiative are taking the long view. They argue that, if done right, it has the potential to be transformative, for both the refugees and the communities that receive them.

“Setting up a sponsorship programme is a multi-year effort,” commented Gregory Maniatis of the Open Society Foundation. “Canada has tens of thousands of sponsors waiting for refugees. But it took 40 years to get to that scale.”

So far, only the United Kingdom has a community sponsorship scheme up and running – although only a handful of Syrian families have arrived since it was launched last July as part of the government’s commitment to resettle 20,000 vulnerable Syrian refugees by 2020.

“The last year has been largely about making sure the thing actually works,” said Russell Rook of the Good Faith Partnership, one of several civil society groups partnering with the UK’s Home Office to design the scheme. “Now the goal is to grow at some pace.”

Rook estimates that 150 to 200 community groups are at various stages of applying to become sponsors, a process that takes about nine months “from first interest to being accepted”.

“The process is quite important,” he told IRIN. “As much as jumping through bureaucratic hoops, it’s about building knowledge and expertise.”

How it’s working in the UK

To be approved as a sponsor, groups must be registered as a charity or partnered with one. They must also have: the consent of their local authority, a detailed “resettlement plan” (as well as the relevant experience to execute it), and proof they have sufficient resources to support a family for one year and housing for two years.

“Sponsorship is a significant undertaking and you should not underestimate the commitment and resilience your organisation will need to show,” cautions the Home Office’s guidance for prospective sponsors.

Caritas Diocese of Salford, which was the second sponsorship group in the country to receive a refugee family, in November last year, submitted a 63-page resettlement plan. “You have to demonstrate you understand and are ready to deliver on all aspects of resettlement from health and welfare to accommodation and benefits,” explained Sean Ryan, national community sponsorship coordinator for Caritas. “You have to put a group together comprising of a combination of people who have relevant professional skills, plus willing volunteers.”

Amongst the group in Salford were several teachers and healthcare workers, a social worker, and a chartered accountant. They attended a one-day workshop by the Home Office as well as training provided by the International Organization for Migration. A delegation from Canada also shared their experiences and appointed the group a mentor from a Mennonite church group in Ottawa that has sponsored refugees.

“The Canadians have been brilliant,” said Ryan. “We’ve gone to them with questions a couple of times.” 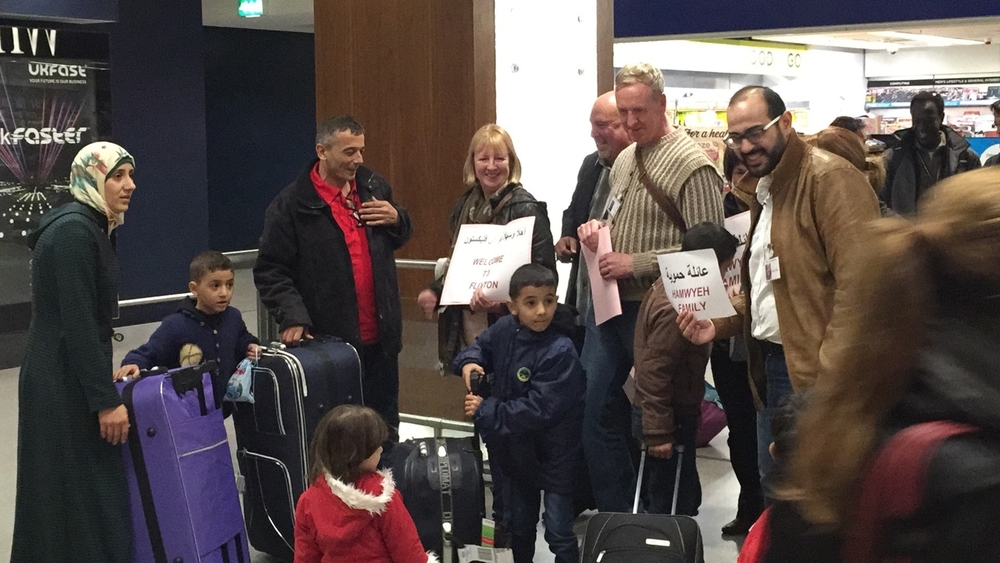 Variations on the Canadian model

According to Bond of the GRSI, training modules are being developed that will draw on examples from Canada to guide countries setting up sponsorship programmes. “It’s not meant to be prescriptive, but to prompt them to think about things like: What kind of training is available to sponsors before the refugee arrives? What happens if you have troubles post-arrival? Who’s paying for what?” she explained. “We don’t assume there’s only one answer to these questions, but somebody needs to be thinking about them.”

Ryan said the UK scheme differs from the Canadian one in that “it’s more of a partnership with government because when our families arrive, they can claim benefits from day one and they’re heavily supported by the state. So what we provide is additional.”

Whereas Canadian sponsorship groups are required to raise around $20,000 to support a family of four for a year, the Home Office suggests that groups will need about £9,000 ($11,400) to sponsor a family.

Although the UK system has fewer upfront costs, Gay Jacklin, who is part of an inter-church sponsorship group in Worthing, believes the Canadian model has a “simpler” application process and is concerned the Home Office’s exhaustive requirements may affect the scheme’s uptake.

“I’d like to think it would catch on,” she told IRIN. “There are a lot of really good people up and down the country who want to make it work. But the high requirements may put some off.”

Jacklin’s group began the process last summer and only welcomed their first refugee family to Worthing two weeks ago. After identifying experienced volunteers and community resources, raising funding, and drafting the resettlement plan, their application was eventually submitted in November. The Home Office then met with the group in January, after which they had to submit “more details than we were expecting”. A house that had been rented for the family sat empty from March until May while the group supplied additional information. In the meantime, said Jacklin, the family were in Lebanon, desperately awaiting resettlement.

“There are so many more families in need,” she added. “I think the process is thorough and needs to be, but it feels like the thoroughness doesn’t take into account the fact there’s a crisis around the world.”

Others, including the Home Office, argue the application requirements are necessary to ensure community groups are equipped to take responsibility for vulnerable refugees.

“These groups have to provide anything a local authority would provide to the refugees, so I think it’s probably a good and right thing that it takes quite a while to make sure they can deliver all of that,” said Rook.

For the small number of families that have arrived in the country through the programme (the Home Office declined to give precise numbers), the outcomes so far have been encouraging. “It has gone as close to the dream scenario as any of us could wish for,” said Ryan, noting that the family’s three children appeared “happy and settled”, that their mother was starting to communicate with them in English, and that the father recently landed a job as head chef at a Lebanese restaurant.

“It’s about making them feel they belong in the community. That’s a healing process and you can see that from our family in their demeanour,” he told IRIN. “You broker connections for them wherever possible, as opposed to what’s typically happened, where, unless you already had family connections, you’re going to sink or swim.”

Two-tier system or step in the right direction?

Jacklin expressed discomfort with the idea of the community sponsorship programme as “the gold standard”, while most refugees who arrive in the UK as asylum seekers receive minimal support and struggle to integrate.

“As Christians, we’d say that’s a justice and moral issue. We’re potentially part of the problem now that this one family is getting the gold standard, but we decided we had to start somewhere,” she said, adding that she was disappointed the government was not using the programme as an opportunity to increase its resettlement commitment.

While sponsorship programmes are unlikely to significantly increase global resettlement levels any time soon, Jacklin and others take comfort from the idea that they have the potential to reduce fear and prejudice towards refugees at a grassroots level.

Maniatis of the Open Society Foundation said the impact of sponsorship programmes shouldn’t be measured by the number of refugees resettled, but by their impact on public attitudes. “I’d argue that over time it’s very positive to build up a constituency that supports refugees,” he said.

Bond pointed out that Canada’s sponsorship programme has created “a natural group of refugee advocates” who ensure the government is under continuous pressure to take in more refugees.

“You end up with a fundamental shift, where the political pressure is to bring in more people.”

(TOP PHOTO: A Syrian refugee family with some of the group of 38 Canadians from Ottawa who sponsored them and are supporting them for their first year in Canada. Credit: Brynna Leslie/IRIN)