Ten years ago, former bricklayer Samuel Musengi was allocated a nine-hectare plot to cultivate in Zimbabwe as part of an accelerated phase of land reform that saw tens of thousands of black families resettled on what were once vast, mostly white-owned commercial farms.

It’s not going so well for him; nor for many others.

Increasingly unpredictable weather and a lack of government support has made it all but impossible for Zimbabwe’s resettled farmers to achieve anything like the full potential of their plots.

Even the government’s weather forecasts are unreliable, according to 42-year-old Musengi, who grows maize and beans and raises a few head of livestock in Wedza, some 90 kilometres southeast of Harare.

“These people (the weather forecasters) get it wrong about when the rains will come most of the time. That makes it difficult to prepare our fields. If the Met Department cannot correctly tell when it will rain, what do you expect from simple farmers like me?” Musengi told IRIN.

But it’s getting harder too for forecasters.

Extreme weather shocks are occurring with rising frequency in Zimbabwe, “with a flood year immediately following a drought year”, according to a 2015 study by Konrad-Adenauer-Stiftung and the Harare-based Research and Advocacy Unit.

In addition to more floods and droughts, the report predicted that the onsets and ends of rainy seasons would continue to change and be interrupted by more frequent and longer dry spells, and that the distribution of rainfall across the country would also become more and more erratic – bad news indeed for Zimbabwean agriculture, which is mainly rain-fed.

In the absence of accurate official forecasts, Musengi and scores of other resettled smallholder farmers in the Wedza area have turned in desperation to self-styled “prophets”.

But they too are of little help.

“The angels have advised the prophets not to predict the rains,” said Musengi. “Only God knows when it will rain. Other farmers go to traditional healers who carry out rainmaking ceremonies, but it is difficult to tell if the rains that come are due to those rituals.”

For want of a pump

By rights, rain shouldn’t be an issue for Musengi and the 20 other smallholders now living on the farm: It has a borehole deep enough to supply water for year-round irrigation.

But the pump is broken and there’s no money to replace it.

It is common for resettled farmers to have to share infrastructure, but during the violence and chaos of President Robert Mugabe’s fast-track land reform programme in the early 2000s, much vital equipment was vandalised or looted, leading to disputes over who should meet the costs of repairs.

“Because of the droughts, we have not been able to produce enough,” said Musengi, who in recent years has seen fellow farmers lose cattle to disease, thirst, and lack of pasture. “I have been getting less than a tonne of maize from my field every year, meaning that I cannot sell anything and get money for inputs and other household needs.”

Eddie Cross, an economist, farming expert, and opposition Movement for Democratic Change lawmaker, estimates that smallholder farmers should be producing some 10 tonnes of maize per hectare in a good year.

One stated aim of land reform was to give subsistence farmers who had long toiled on low-quality soils in communally-owned areas – as well as junior civil servants, war veterans, pensioners, and businesspeople – access to more productive land so as to contribute to Zimbabwe’s food basket. More than 140,000 people benefitted from the scheme, with an average plot size of 12 hectares.

However, in practice, many have been left to fend for themselves, with little support to face up to the growing effects of climate change.

“The fast track land reform programme could have gone a long way in addressing the climate adaptation and resilience needs of smallholder commercial and other resettled farmers, but unfortunately this opportunity may have been missed,” Leonard Unganai, a climate expert working with Oxfam, told IRIN. “This is so simply because that was not an explicit policy objective of the programme.” 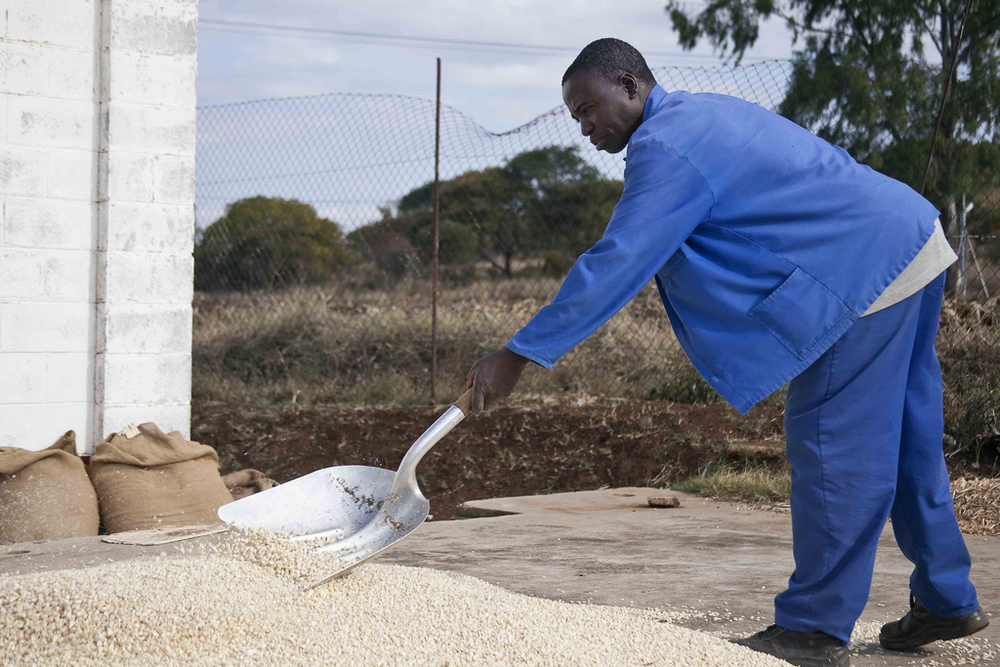 While those resettled have the right to live on and work the soil of their farms, they were not given title deeds, even those who farm on a commercial rather than subsistence basis. Ownership of all rural land in Zimbabwe acquired under the fast track land reform programme is now vested in the state.

Many resettled farmers have been issued 99-year leases, but these can be revoked at any time if the government says the land has not been used productively.

They “have no security of tenure, no ability to borrow money against their land holdings, and no way of selling their assets if they want to move or change to another activity,” said Unganai. “Secure land tenure is definitely important to encourage adaptation and resilience-building investments on the land. One hopes the government addresses this gap as a matter of urgency.”

Cross explained how this sense of insecurity means the farmers have no motivation to invest in and develop their plots. “They can be removed from their farms at the whim of the minister at any time for any reason or no reason at all,” he said. “Their vulnerability is total.”

Without sizeable investments, farmers are unable to cope with the repeated droughts and floods. They hardly have any means to fall back on for their own subsistence and to pay for the preparation of the land for the next season. This has created a vicious cycle of food insecurity.

The ruling Zanu PF party concedes there is more to be done to help resettled farmers.

Christopher Chitindi, an MP who heads the parliamentary committee on lands and agriculture told IRIN the "government must urgently look at ways to ensure that the land given to resettled farmers is bankable, and the best to achieve that is to make land rights transferable from one person to another and from one generation to the other, which is not the case at the moment.

"It must also speed up the process of coming up with the new land policy to address existent tenure rights gaps and to specifically address the needs of resettled farmers in the context of climate change," he added.

Ongoing land invasions and the forced displacement of resettled farmers make matters worse. These have been sporadic of late, but factional wars within the ruling party complicate the situation and have become more frequent as different camps jostle to succeed Mugabe, now 93.

Mwazviona Gora, 58, of Goromonzi district in Mashonaland East Province, some 50 kilometres southeast of Harare, is a veteran of the war of liberation that brought Zimbabwe independence from Britain in 1980.

Gora participated in the invasion of white farms at the turn of this century. He received 90 hectares in 2003 and has since been farming maize, groundnuts, and vegetables, together with scores of goats and chickens.

“They (militias from Mugabe’s ruling ZANU-PF party) say I am thankless and now claim that the farm actually belongs to one of their godfathers,” he told IRIN. “I have hardly done any farming this year and these boys are stealing my livestock. They have also taken away my generator and irrigation pipes and won’t let me use the small dam for irrigation.”

Gora had enough problems even before his plot was invaded. Like many other farmers, banks have been turning him away because his farm is considered state land. This means he has no collateral security and can’t insure his crops against droughts, veld fires, and floods.

He hopes to convince established agricultural companies to contract him to grow seed potato, as the luckiest smallholders in his area have done. These firms provide expert help that boosts skills and productivity and gives farmers the opportunity to diversify from maize, which has proved particularly vulnerable to extreme weather events.

Such support is sorely needed in a country where the agriculture sector, despite accounting for some 60 percent of the labour force and 20 percent of GDP, gets only around five percent of the national budget. This is about half the proportion set out in the Comprehensive Africa Agriculture Development Programme drawn up at an African Union summit in 2003.

The government’s National Climate Change Response Strategy notes that the impacts of climate change “pose a serious risk to food security and adaptive capacity”, but it barely mentions the needs of resettled farmers.

“Generally, resettled and non-resettled farmers now know that there is climate change, through experience and sporadic awareness campaigns by development partners,” said Wonder Chabikwa, president of the Zimbabwe Commercial Farmers’ Union. “The problem is that they still don't know what exactly to do to adequately respond to the challenges of climate change.

“Even [government] agricultural extension workers seem to be confused too. This is worsened by the fact that, unlike in the past, they are no longer accessible to farmers. They must be on the ground, teaching farmers on the best methods to till their land, what crop varieties to adopt, and how to deal with crop and livestock diseases.”

Chabikwa suggested the government should set up a non-commercial bank that gives loans to farmers at sustainable rates. “It used to do that in the past, but the bank has commercialised and is no longer responding to the needs of resettled and poor smallholder farmers,” he added.

Although the situation is desperate, the farmers themselves are determined to find solutions, with or without the help of the government.

“We must not be crybabies,” said 38-year-old Thabeth Marimo, Musengi’s neighbour in Wedza. “[We must] become more self-dependent and organise ourselves into community groups to discuss the challenges we are facing and how best we can deal with the changing seasons. After that, we can approach the government and donors to help.”