Only disgraced ex-president Yahya Jammeh’s most hardcore supporters turned up to watch as he boarded a private jet at the weekend for exile in Equatorial Guinea. Some soldiers and members of his political party cried and shouted: “Daddy, Daddy”. Others aggressively jeered at supporters of The Gambia’s new coalition government.

But once he took to the skies, most of the nation breathed a collective sigh of relief.

“This day is amazing. We didn’t see it coming. We didn’t believe that he would leave, and the fact that this has happened democratically is the greatest achievement,” said 24-year-old Aminata, part of a youth group helping Gambian refugees as they arrived back at the ferry terminal in Banjul.

“A year ago, we thought this would be impossible. But now we are hopeful that things will change. Now, we feel that destiny is in our hands, because leaders will have to be more accountable. Now, we know the power of our vote.”

The moment was all the more remarkable because of what was at stake if the situation had unravelled. “We are in disbelief that we have come out of this in peace. We are glad that Jammeh has gone, but in a solemn way, because we came so close to war,” added Aminata’s friend, Khadija.

Adama Barrow, The Gambia’s new president, was sworn in last week. For his safety, the ceremony had to take place in Dakar, Senegal, and he was not planning to return home until a West African military intervention force had secured the country.

They were poised across the border the night Barrow was sworn in, and the threat of force was crucial in buttressing mediation efforts by the West African regional bloc ECOWAS that eventually succeeded in pressuring Jammeh to accept his electoral defeat and step down.

ECOWAS troops and military vehicles now patrol the streets of Banjul, cheered as they pass. Gambian soldiers are meanwhile being disarmed because of a concern that rogue elements, still loyal to Jammeh, could cause trouble. 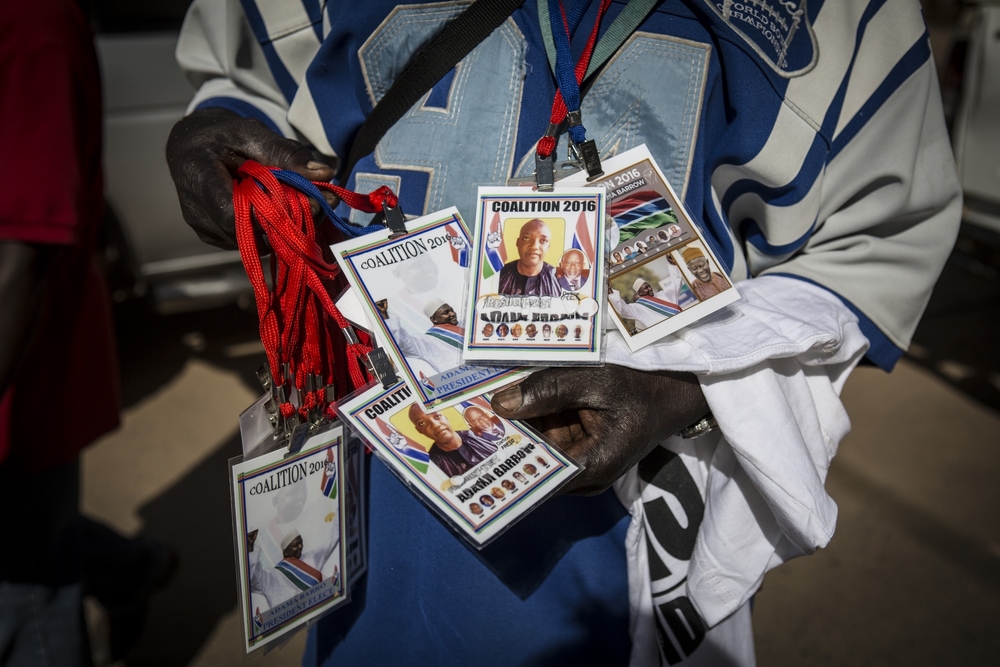 Jason Florio/IRIN
Adama Barrow - the man of the moment

From total power to ignominy

Jammeh, along with a group of other young officers, came to power in a coup in 1994. After 22 years of oppressive rule, in which arbitrary detention, torture, and disappearances were common, he suffered a shock electoral defeat in a 1 December ballot that most analysts assumed he would rig.

At first, Jammeh magnanimously accepted the result, only to change tack a week later and declare the poll void. He petitioned the Supreme Court for a fresh election, but as he had sacked most of the judges 18 months previously the court could not hear the challenge before May.

He then declared a state of emergency that technically would have allowed him to stay in power for another three months. This desperate, last-ditch attempt to cling to power was ignored by the West African leaders who were working to resolve the crisis.

By then, Jammeh’s grip on power was already slipping. Most of his cabinet had deserted him and his army chief, General Ousman Badjie, had conceded that his soldiers would not resist the ECOWAS intervention force.

Barrow’s inauguration speech embraced the history-making moment. “This is a day no Gambian will ever forget,” he said. “The capacity to effect change through the ballot box has proven that power belongs to the people in The Gambia. Violent change is banished forever from the political life of our country. All Gambians are therefore winners.”

But the fact that Barrow’s much-anticipated swearing-in couldn’t take place on Gambian soil is a bitter reminder of the regime’s far-reaching net of oppression.

Jammeh had ordered there to be no inauguration celebrations. In the event, nothing could stop at least several thousand young Gambians defiantly taking to the streets.

At Westfield Junction – the symbolic location just outside Banjul where opposition activist Solo Sandeng was arrested in April last year after calling for electoral reform (he was subsequently tortured to death) – the crowd grew and grew. Above the throng was one united cry: “Gambia has decided”. 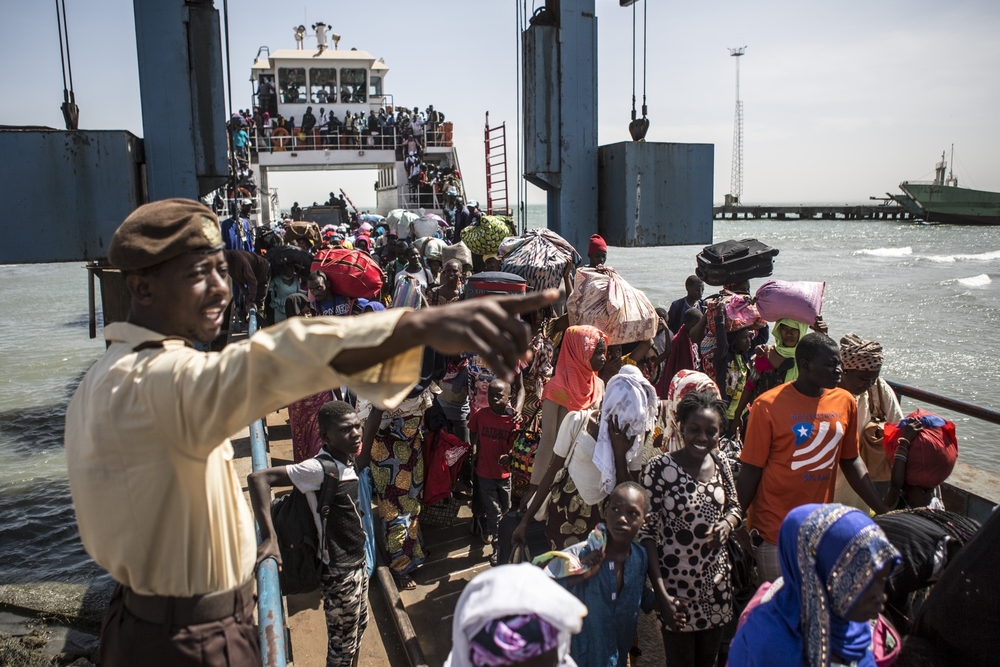 Having put themselves on the line, young Gambians who voted for change are determined to see a new Gambia achieved.

“The day the coalition was formed – that was the day the whole country smiled,” said Momodou Jallow, 28.

But Jallow also offered a sobering reminder to the coalition not to lose sight of how they came to power. “I voted for Adama Barrow not because I liked him but because I didn’t want to vote for Jammeh,” he told IRIN.

Jallow, who was recently arrested for posting views critical of Jammeh’s government on social media, wants to see a change in the constitution, in particular the introduction of a two-term presidential limit.

And there are plenty of other challenges facing the new administration. After more than 22 years of Jammeh’s autocratic rule, it must start pretty much from scratch: having to install a cabinet, institute a proper rule of law, and launch much-needed military and political reforms amid a climate of both uncertainty and expectation.

One of the new administration’s first tasks will be to support the return of the 46,000 refugees estimated by the UN’s refugee agency, UNHCR, to have fled to Senegal and Guinea over the past weeks, fearing impending conflict.

An estimated 25,000 have also been internally displaced, according to the Gambian Red Cross Society. Almost everyone in the capital sent family members – mainly women, children, and the elderly – away to the sanctuary of relatives in other parts of the country.

Extra pressure is being placed on already stretched food supplies and sanitation in the some of The Gambia’s poorest communities, according to a rapid assessment survey by United Purpose, an NGO. 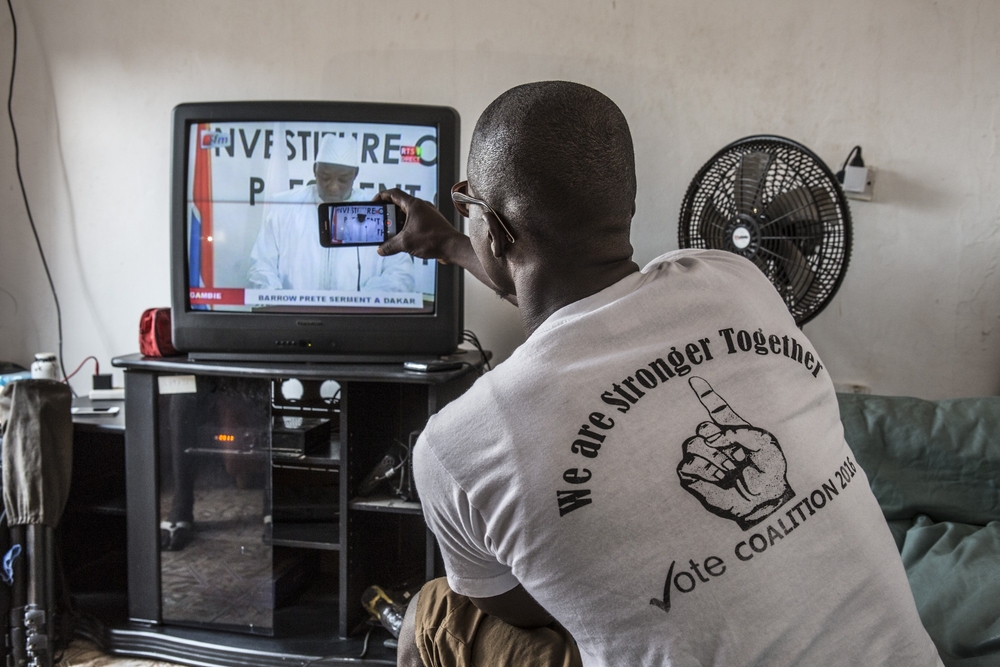 Jason Florio/IRIN
The revolution is televised - watching the inauguration

But uppermost in many Gambians’ minds is how Jammeh and his accomplices will be made to pay for the wide-ranging crimes and abuses perpetrated under his regime.

Jammeh is free to return to The Gambia in the future under the exile terms set out in a joint statement by the UN, the Afrcian Union, and ECOWAS. These state that he, his family, and his senior aides should have the same rights to dignity and safety as any former president.

The unsigned communique implies that he will have impunity from prosecution but it doesn’t impose any legal obligations on the new Gambian administration. Barrow has since referred to it as a “resolution, not an agreement”.

Barrow’s administration intends to establish a truth and reconciliation committee, which will gather evidence. But some people do not think this process will go far enough.

The new government’s spokesman, Halifa Sallah, has already hinted that it may not be in the national interest to delve too deeply into the past.

But Fatou Jagne, West Africa director of human rights NGO, Article 19, has welcomed a homegrown reconciliation process, saying: “We need to give Gambians a chance to set up a mechanism that will work for them to get to the justice and the truth.”

New Gambia has begun. It’s a place where people can now speak freely and have hope for the future, but the new administration will need to carefully manage the soaring expectations of its people, according to Abdul Aziz Bensouda, secretary-general of the Gambian Bar Association.

“People have expectations for rapid development, but [this will be difficult] with a budget that’s just enough to pay the bills,” he said. “It is a case of trying to right the wrongs under Jammeh’s regime, and move us [forward].”