On a quiet, residential street overlooking the Tijuana River, barely two miles from the US border, Pierre Jacques Norma, a Haitian migrant who has traversed nine countries over the past three months to reach Mexico, sits in the dining area of the Casa del Migrante shelter.

Norma’s future is uncertain even by the precarious standards of most migrants. When he and his pregnant wife go to their appointment with US Customs and Border Protection on 23 December, he has no idea if they’ll be released into the United States and given the opportunity to apply for asylum or be detained and deported back to Haiti.

“I’m not scared of being deported. I know God is looking for a better life for me,” he says, finishing off a dinner of rice and stew provided by the shelter. The small group of Haitians sitting around the table nods in agreement.

It’s no surprise that Norma places his faith in God as he contemplates his future. The past few months have been a rollercoaster ride for US policy towards Haitian migrants. The election earlier this month of Donald Trump, who campaigned on an anti-immigration platform, has only added another layer of uncertainty.

On 3 November, with little fanfare, the US Department of Homeland Security (DHS) resumed deportations of Haitians for the first time in the nearly seven years since they were suspended following a devastating earthquake. The move was a response to a 1,300-percent increase in arrivals of Haitian migrants over the past year, an influx that immigration officials have been struggling to manage.

Between October 2015 and September 2016, about 5,000 Haitians arrived in the US, the majority of them via Brazil, where they have been eligible for humanitarian visas since the 2010 earthquake. But Brazil’s economy took a nosedive this year, sending the country’s unemployment rate soaring to 11.8 percent and prompting many Haitians to make the long trek to the US.

“DHS thought that this humane policy was a magnet and drawing people to the southwest border, and so they wanted some deterrence. They changed the policy and said we’re going to deport them,” explained Randy McGrorty, executive director of Catholic Legal Services for the Archdiocese of Miami, which represents people seeking asylum and relief from deportation.

But before deportations could resume Haiti was once again devastated, this time by Hurricane Matthew, which hit on 4 October. The UN estimates that 1.4 million people in Haiti are in need of humanitarian assistance following the hurricane and that 800,000 are “extremely food insecure”. The country, the poorest in the western hemisphere, is still grappling with an existing cholera epidemic that has sickened 700,000 people and killed 10,000 since 2010.

After the hurricane, DHS put deportations on hold, but only for 30 days. In the past three weeks, since they resumed, 203 Haitians have been deported, according to an official from US Immigration and Customs Enforcement (ICE).

During November, most Haitians admitted into the US (about 1,440) were slated for deportation and detained as part of a process called “expedited removal”.

“If someone is put into expedited removal proceedings, they don’t have access to a judge,” said Andrea Guerrero, the executive director of Alliance San Diego, an immigrant assistance agency. “They are summarily ordered removed and deported as soon as is feasible.”

But detention centres soon filled up. ICE says that 10 percent of its detention space is now filled by a total of 4,425 Haitians.

DHS was forced to change policy once more. Starting on 11 November, the department went back to its pre-September policy of paroling Haitians.

A parolee is given a court date in their destination city and released. Those individuals will eventually go before a judge to determine if they have a genuine asylum claim. In most cases, their claims will be rejected and they’ll be placed in deportation proceedings. But with half a million people in line for a court date, the wait can be years and in the meantime many find work in the US. 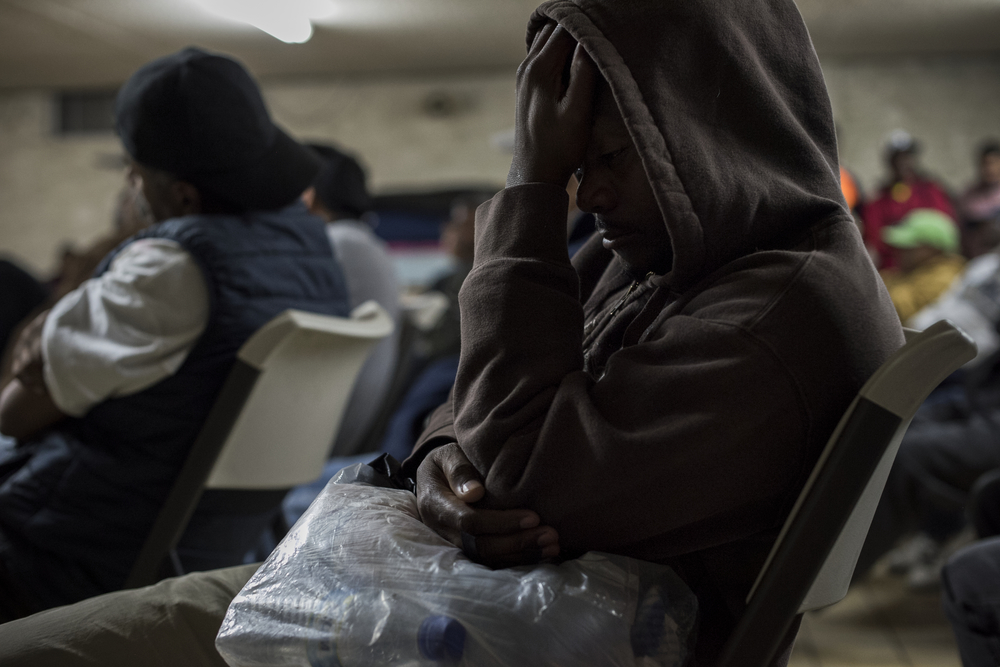 Norma has been in Tijuana since 5 November, but US border officials are only able to process about 60 Haitians a day. With an estimated 4,000 Haitians waiting to enter the US from Tijuana, and ICE officials estimating that as many as 40,000 more are en route from Brazil, the wait for an appointment can take months and uncertainty about the outcome has left many on the border despondent.

Since the 2010 earthquake, many Haitians in the US have benefited from temporary protected status for 18-month periods that have been repeatedly renewed, most recently until July 2017. But new arrivals don’t qualify for TPS and there are fears that president-elect Trump will shut down the TPS programme all together, making even Haitians who have been resident in the US for the past seven years liable for deportation.

Last Friday afternoon, outside the Casa del Migrante shelter, Norma and his friends were hanging out with a small group of Haitians – five women and five men – whose appointments with Customs and Border Protection were that day. They were waiting for Grupo Beta, a Mexican immigration organisation formed to assist migrants, to pick them up and transport them to the border. When the van arrived, everyone gathered around. Shelter volunteers took photos and waved goodbye and the Haitians staying behind looked on smiling, but with a hint of longing.

Father Pat Murphy, who runs Casa del Migrante, has seen US policy shift too many times over the past couple of months to offer any advice to the Haitians staying at his shelter.

“The ones who went today probably will be paroled. By Monday they could change their minds again,” he said. He added with a frustrated laugh, “I’m not going to say anything to anyone anymore because I look like the crazy one.” 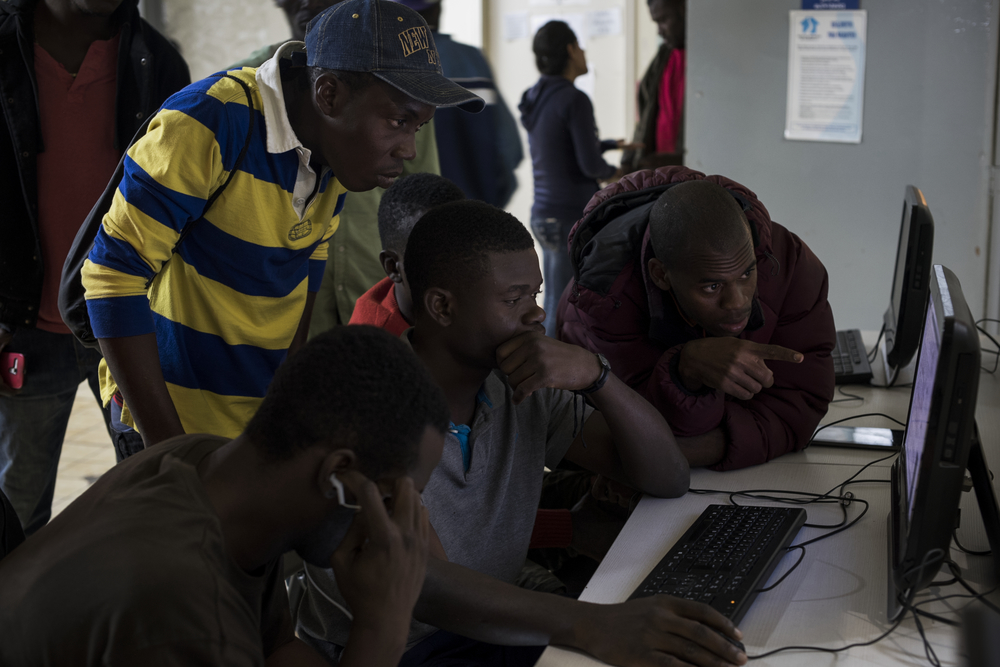 The unannounced policy changes have profound ramifications for the NGOs in the US that have the de facto task of caring for the parolees when they’re released.

Guerrero is exasperated that the government doesn’t appear to have learned from the very recent past.

“We were in this situation a couple of months ago. We were in a shelter crisis. We had to open up National Guard facilities. We had to put a call out for donations. We were feeding 500 people a day because they didn’t have anything but the clothes on their back. And now, by next week, we’re going to be in the exact same situation.

“It’s a failure of government to not make a proper plan or partner with receiving communities.”

In a statement released on Wednesday, DHS Secretary Jeh Johnson formally announced the resumption of deportations for Haitian nationals and said he had authorised ICE to acquire additional detention space so that those apprehended at the border “can be detained and sent home as soon as possible”. 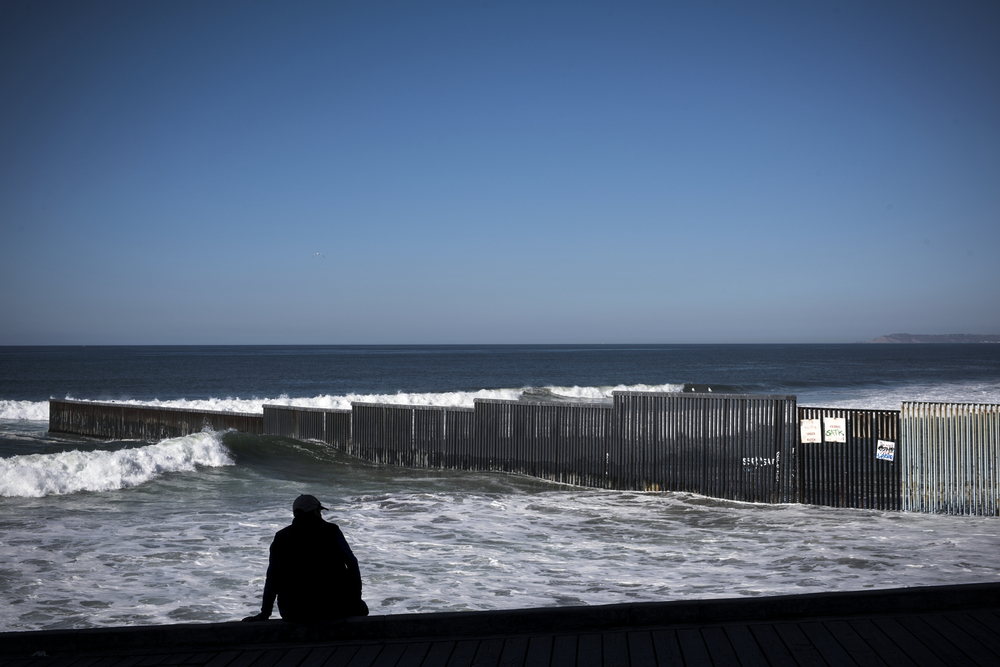 Among the Haitians in Tijuana there remains a stubborn fixation on the American dream, but Murphy is trying to persuade them to consider shifting it south just a few miles. He’s encouraging the Haitians to think about a Mexican dream instead of an American one.

“You get to the other side, have your parole, and in one year you go to court and you’re deported anyway. It’s not a final solution to your problem,” he tells them. “Mexico offers a humanitarian visa. Take it and work.”

“Tijuana has always been this place where people can feel at home even if they’re from somewhere else,” Murphy told IRIN.

And while it might not be the first choice for many here, it’s certainly on their radar.

“Haitians have heart; heart to fight, to work, to find a better life,” said Sammy Laroch, one of the Haitians watching the group climb into the Grupo Beta van to go to the US border.

Asked if he’d consider staying in Tijuana, Laroch said he would first try his luck getting paroled in the US, even if it carried the risk of detention and deportation. Tijuana was “plan C”.