ON BOARD A RESCUE VESSEL IN THE CENTRAL MEDITERRANEAN

After an accord with Turkey practically shut down the Aegean route, the EU is eying a raft of deals with African nations to stem an increasing surge across the Central Mediterranean that has led to a record number of migrant deaths at sea.

Following recent visits by the Italian and German foreign ministers, the EU dispatched a delegation this week to the Nigerian capital, Abuja. The reason for the flurry of high-level meetings is no secret.

Nigerians represent the top nationality of migrants arriving by boat to Italy this year. Out of 157,000 migrants and refugees who have arrived so far in 2016, 19 percent were Nigerian, according to the UN’s refugee agency, UNHCR.

Nigeria is one of five African nations the EU has prioritised as part of its Partnership Framework with third countries, launched in June – the other four being Ethiopia, Niger, Mali, and Senegal.

"I didn’t want to leave, but there are so many bad guys now in Nigeria, I had no choice. I did what I had to do to survive."

The EU officials were in Abuja this week to formally kick off negotiations with the Nigerian government on an agreement that would allow Italy and other EU member states to return Nigerian migrants not found eligible for asylum.

A progress report on the Partnership Framework released on 18 October notes that “stepping up cooperation [with Nigeria] should be a particular focus of the coming weeks”, with the main goal being “a swift conclusion” on a readmission agreement.

Nigerians attempting to reach Europe by boat are widely perceived to be economic migrants, and yet, in the absence of a formal agreement, EU member states have struggled to return them.

Diplomats and officials quoted in a Financial Times report said directing private European money to Nigerian infrastructure projects was one EU priority but also mentioned more controversial “return and readmission” goals of 50 percent over the next three to six months and 75 percent by 2018-2019.

Hosting Nigerian President Muhammadu Buhari, Chancellor Angela Merkel pointed out at a joint Berlin press conference on 14 October that while most Syrians in Germany came from a war zone and were granted asylum, the approval rate for Nigerians was only eight percent. “We presume that most of them came for economic reasons,” she added.

The Boko Haram conflict in northern Nigeria has displaced millions internally and regionally but poverty is seen as the main driver of migration to Europe, although the violence and political turmoil often play a factor too.

This week, on board a rescue vessel operated by SOS Méditerranée in partnership with Médecins Sans Frontières, IRIN found that 84 out of the 521 rescued migrants were Nigerian. They gave an array of different reasons for being there, ranging from unsubstantiated claims of religious and political persecution to fears over deteriorating security and soaring crime. 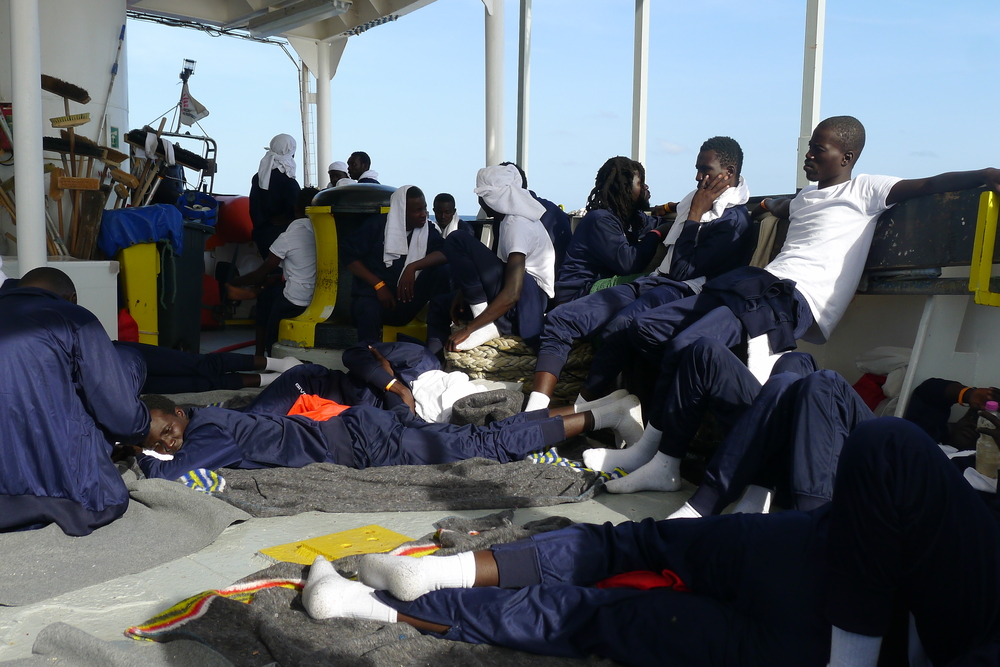 “I was doing well in Nigeria, working as a hair stylist and I earned enough money for my family,” said 27-year-old Maxwell. “But after my brother and my mother were killed, it became too dangerous for me to stay.”

Maxwell said his brother – a taxi driver – was killed after witnessing a crime and being pressured into giving a police statement that led to the incarceration of a criminal gang leader. “The gang threatened my brother and then one day came to the house and shot him dead in front of me,” Maxwell told IRIN. “Then they came after me. Even though we moved house, they found us and killed my mother, and I couldn’t stay in Nigeria after that. This gang had killed all my family and I knew they still wanted to kill me; so I took all the money I had and made the journey to Libya.”

Victor, 33, who worked as a driver for a Nigerian politician, said he fled after becoming caught up in a feud between rival political parties. “A group from the opposition approached me and asked me to help arrange the kidnapping of my employer. But he was a good man who always treated me well, so I refused,” he said. “I told him what they were planning and that his life was in danger and explained that I had to quit my job because my life was also in danger.” Within a week, Victor said his boss had been assassinated and the perpetrators came after him. “I left that night and never looked back,” he told IRIN. “I didn’t want to leave, but there are so many bad guys now in Nigeria, I had no choice. I did what I had to do to survive.”

Twenty-three-year-old Esther, who left Nigeria heavily pregnant and gave birth to baby Naomi in Libya just one week ago, said that she left for economic reasons, having been promised a prosperous future in Europe by people smugglers.

“I was working as a receptionist in a hotel and I had an income, but it was small and not really enough to help my family,” she said, nursing her baby in the makeshift MSF clinic on board the boat. “Then, one day, a Ghanaian man came to the hotel and said he could help me get to Europe. I told him I didn’t have any money, but he told me it was no problem, he would arrange everything, which he did. It was really strange that he helped me for nothing.”

Esther left in secret, without telling her family or friends, and has not contacted them since leaving Nigeria. “I really hope I can get a job in Europe, to help me and Naomi, and I hope to be able to send some money home to my family, because money is very difficult to get in Nigeria now.”

Along the roads near the southern Italian coast, the cruel reality that exposes the smugglers’ empty promises is visible. Young African women can be seen wearing unseasonably small clothing, working as prostitutes for passing motorists.

“Our government is not helping us in Nigeria,” said 25-year-old Festus, who alleged huge corruption in the country’s political sphere. “I worked hard and didn’t get money, but all around me I saw people who didn’t work getting money.”

Festus ran a small grocery store, but said his business was ruined by desperate customers begging for credit and then being unable to pay him back. “I worked in Tripoli for three years to pay for this boat crossing. It was so hard in Libya [that] sometimes I thought about going back to Nigeria. But everything is going up in price and life is becoming impossible there,” he said. “I spoke to a friend just last week who told me a bag of rice that used to cost 17,000 naira ($54) now costs 20,000 ($63). Ordinary people can no longer afford to buy even basic foodstuffs.”

For economic migrants like Esther and Festus, the reality of Europe rarely lives up to their hopes and expectations.

In a small town near Naples, Joshua, a 24-year-old from Nigeria, walked slowly around the town, asking people in poor Italian if they had a few spare euro cents.

“The situation here is very difficult,” he told IRIN. “There is very little work and even when I can find work, the money is very bad.

“With the fruit-picking, you have to fill a very big basket to earn €4 and how quickly you can fill it depends on your capability. But now, there are very few opportunities even with the fruit-picking. And more and more people are coming from Africa, so I think there will be even less work in the future.”

Joshua was in his third year of medical school when severe financial difficulties, which left him unable even to buy medical books, forced him to drop out. He fled to Libya, then Europe, believing he could find work and better opportunities. But the hardship of life in Italy has left him disenchanted.

“I left Nigeria two years ago and it was a big risk because I nearly died on the boat, but, really, it wasn’t worth it,” he said. “I am even thinking about going back to Nigeria now, and from there maybe I will try to get to Canada, with the grace of God, because I hear there are a lot of jobs in Canada.”