This article is part of our in-depth coverage. Read more like this...
LOHUU, INDONESIA

Isria is sitting out on a large bamboo platform over the sea. Piles of seaweed with a multitude of colours and textures surround him. He runs his hand along a thin rope, removing a bunch of seaweed every metre and throwing it out onto the platform to dry. His boat is tied up, piled high with these seaweed-laden ropes; he has just returned from a harvest.

Isria, like many Indonesians, uses only one name. He is a seaweed farmer. He lives in Lohuu village on Kaledupa, an island that forms part of the Wakatobi Marine Park off eastern Sulawesi in Indonesia. Almost all of the working-age residents of this village of a couple hundred people are seaweed farmers.

The families in Lohuu are not alone in the region. With dwindling fish stocks, people all around these islands are finding it increasingly hard to make a living from fishing so many are turning to seaweed farming instead.

Could seaweed be the economic future of this region? Isria thinks so. Pointing behind him to his home, and then out towards the ocean, he smiles and says, “I love this work. With seaweed farming I can make enough money to feed my family.” 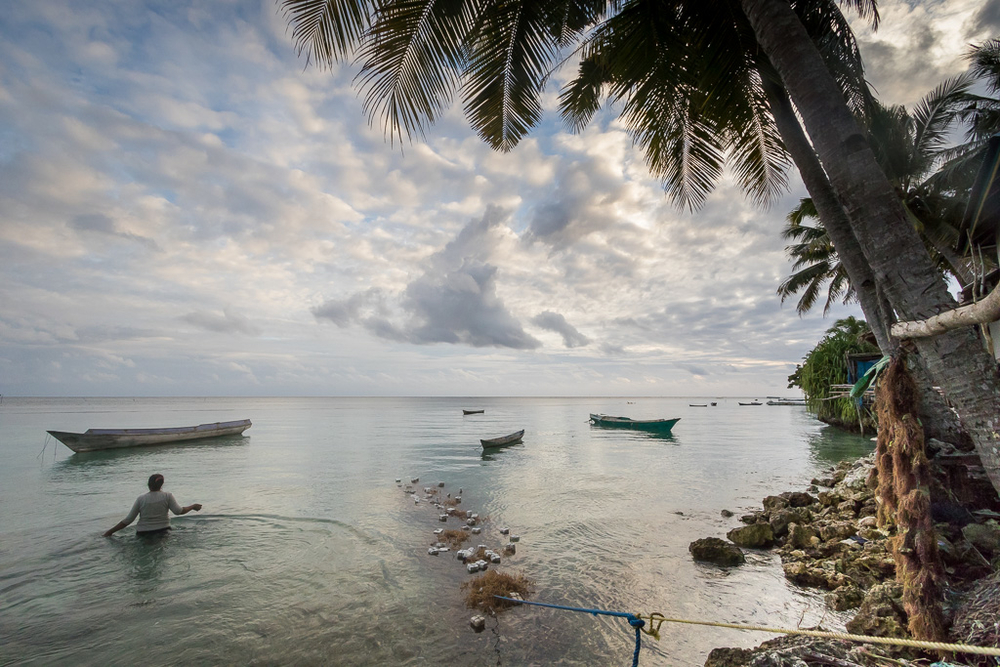 Unfortunately, it’s not that simple. There are environmental impacts associated with seaweed farming that are just beginning to be understood. Worse though, as Kihagar, another seaweed farmer, points out, climate change may be affecting seaweed growth: “The weather is changing and it can sometimes give me a bad harvest.”

For centuries seaweed has been a farmed product, but it wasn’t until the 1930s that the use of carrageenan – a seaweed-derived thickening agent – turned commercial. Nowadays, many everyday products contain carrageenans, everything from toothpaste to ice cream to burgers.

In Indonesia, seaweed farming has been growing over the last three decades. By 2009, Indonesia had become the world’s largest producer of katoni seaweed (Kappaphycus alvarezii), one of the most important commercial sources of carrageenans. By 2013, when the UN’s Food and Agriculture Organization conducted extensive research into the booming industry, it was already supporting the livelihoods of more than 20,000 smallholder farmers in Indonesia alone.

In Lohuu and nearby villages, people started farming seaweed in 1989. La Ode Waidi, one of the oldest seaweed farmers in the village, used to journey to Borneo for tree felling work. On his travels, he noticed how much money seaweed farming made in other parts of Indonesia and started doing it himself back in Lohuu. Other villagers slowly followed suit and soon the majority of them were growing seaweed. In Lohuu, it has become the financial backbone of the community.

There are no longer enough fish to provide the livelihoods that people need. Mukan said he is still eking out a living as a fisherman, but times are tough. He described how he used to go out and bring home a basket full of fish after one hour. Now he can be out there for half a day and return with nothing. 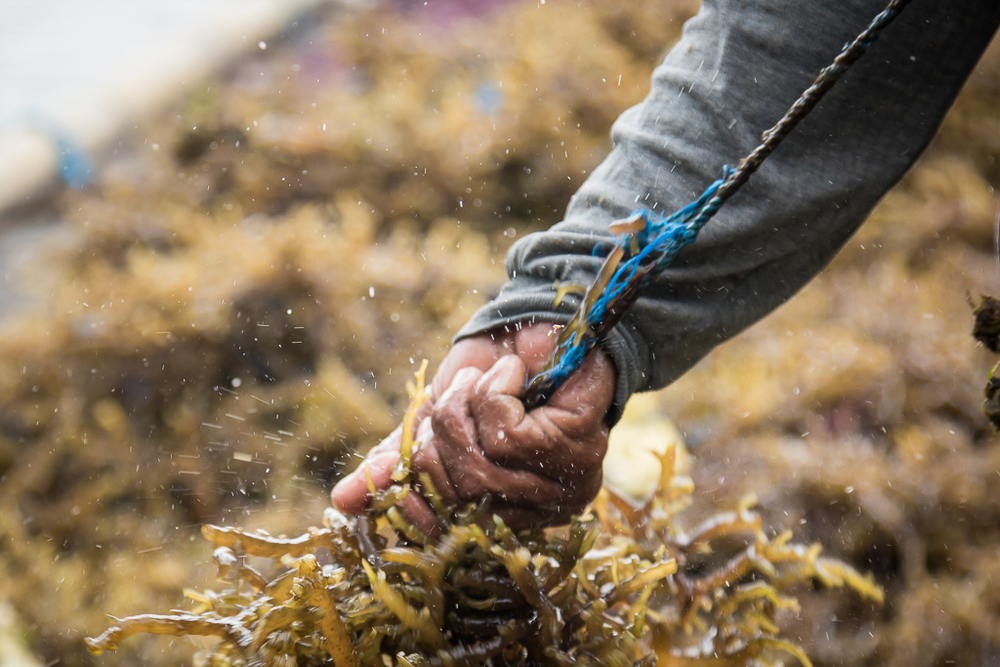 Isria removes seaweed from the ropes it grows on

Professor David Smith of the University of Essex, a marine biologist who has led a reef monitoring project in the region for 15 years, has found that there are 75 percent less fish today than when they started recording in 2002.

“This is because of overfishing, but also a loss of coral cover, which is due to multiple reasons,” he says.

Fish stocks aren’t just plummeting here; it’s a global problem. And in low-latitude developing nations like Indonesia, a crisis is brewing. In this nation of more than 17,000 islands and 260 million people, disappearing fish stocks could lead to malnutrition. As the FAO noted in a 2014 report, “the fishery sector provides a significant contribution to the food security of the country”.

This is scarily apparent on remote islands such as Kaledupa. People here eat fish three times a day. Fish provide the protein and micronutrients needed to survive. But this crucial food source is disappearing as habitat degradation and overfishing take their toll on stocks.

Fishermen on Kaledupa say they are worried about the future, and that they are open to alternatives to fishing that would provide enough income to feed their families. It’s no coincidence that so many are turning to seaweed farming.

It’s being lauded as a wonder crop that requires no fresh water, land, pesticides or fertilisers, and it grows fast. But seaweed farming is not without its challenges.

Starting a farm is a labour-intensive process. Very small pieces of seaweed are tied every 20 centimetres to long ropes, which are anchored to sticks and attached to plastic bottles and pieces of polystyrene that act as floats. The farms float on the surface over large areas of shallow water. After 40 days the seaweed is harvested and dried in the sun.

Once dry, the farmers sell it to brokers and it eventually makes its way to the Philippines, where 87 percent of Indonesia’s seaweed is processed, according to The Opwall Trust, a UK charity that supports conservation-friendly economic development projects. The high value of processed carrageenan means that this represents a significant and unnecessary loss to the Indonesian economy. 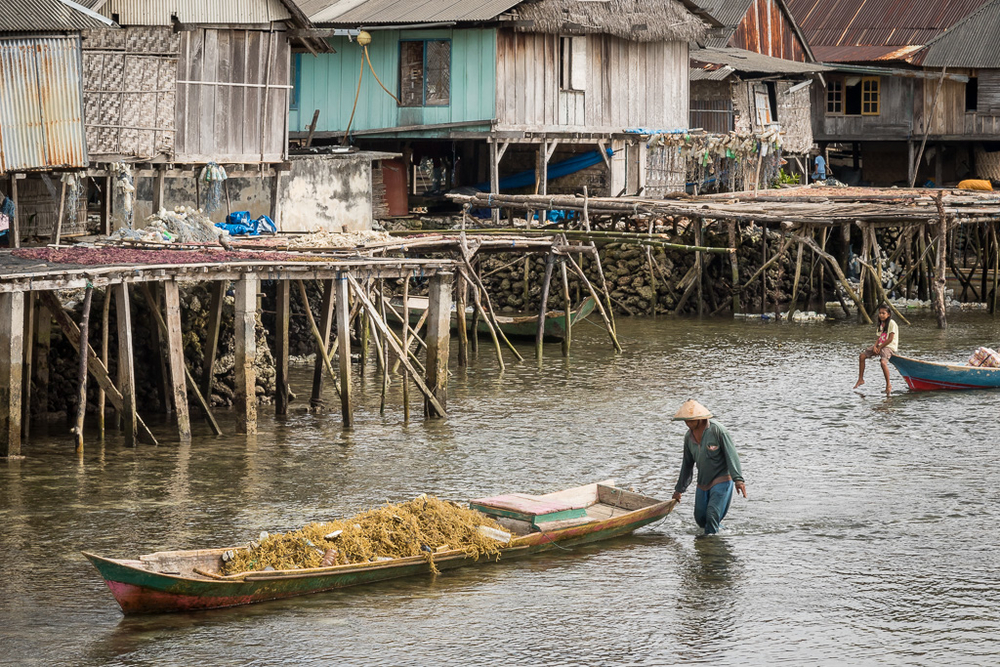 Despite an increasing global demand for carrageenan, higher prices are not filtering down to the farmers. The Opwall Trust is piloting a plan over the next few years to build a seaweed processing plant in the region. It would cut out the middleman, meaning local farmers would be getting a better price for their seaweed.

The by-products of processing are nutrients that could be used to fertilise poor soil on the island and produce food, which could reduce reliance on fish as the main protein and source of nutrients.

The Opwall Trust also plans to offers farmers a share in the processing plant in return for relinquishing their fishing licences.

That sounds like a great idea, but in practice it’s unlikely to stop anyone from fishing. The region already suffers from poor enforcement and is rife with illegal practices like using explosives to catch fish.

So could seaweed farming really offer a suitable alternative to fishing?

On the island of Kaledupa, it does provide a more reliable income than fishing right now, but there are serious longer-term concerns. Disease can have a big impact on harvests, and so can weather patterns, which are both becoming more erratic with climate change.

Smith, of the University of Essex, warns that if seaweed farming is left unregulated it can create environmental problems too. Shallow coastal habitats and inter-tidal areas maybe be altered or destroyed by the increasing development of seaweed farms. These coastal shallow habitats provide nursery areas that most species of fish in the tropics depend on for their survival.

Perhaps this can be overcome by creating more than just seaweed farms. In other parts of the world, seaweed has been grown alongside shellfish and other marine life.

As long as future aquaculture doesn’t repeat past mistakes, it may provide a sustainable alternative to fishing, experts say. But that depends on making conservation a priority and ensuring that it allows a diversity of species to coexist.

“If seaweed farming is to be the answer, it is better to look at the most sustainable ways to manage and farm now rather than wait for expansion, unregulated farming and environmentally degrading processes,” warns Smith. 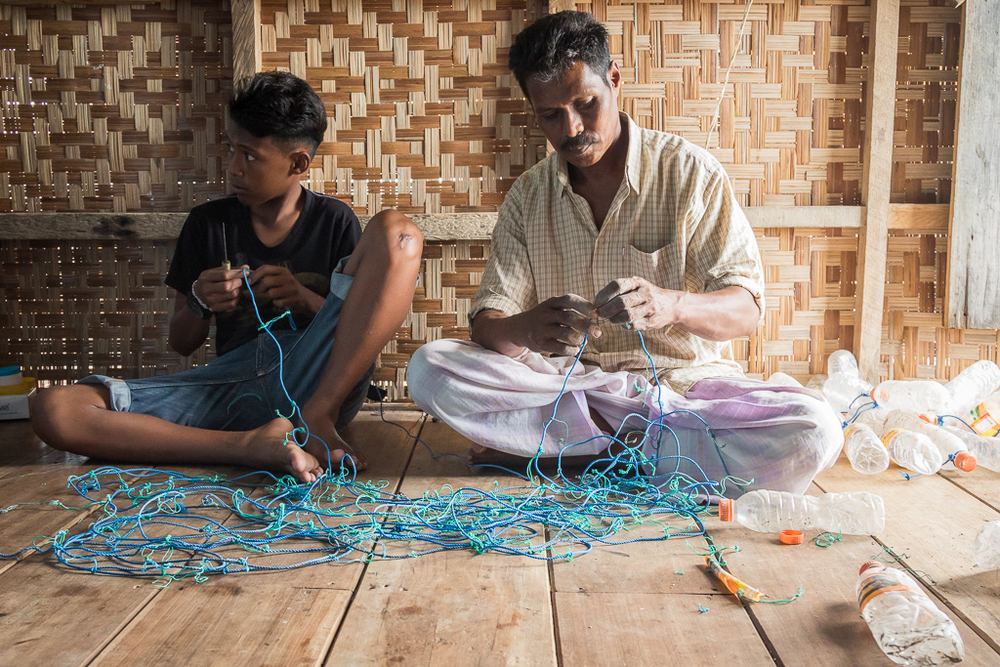 Planning for the future does not come naturally to the people of Kaledupa. In their culture, people live one day at a time. In fact, the Indonesian language has no future tense.

But people adapt, like former fisherman Kihagar, who turned to seaweed farming as the fish ran out. He sits in his front room surrounded by mounds of rope and plastic bottles, teaching his son how to mend and build seaweed ropes.

“Hopefully we can always do this,” says Kihagar.