Read about what we achieved.
SIRTE

The sun sets to the sound of distant explosions. Three children sell homemade bread by the side of the road to Libyan soldiers driving between the frontlines. This is the outskirts of Sirte, where the battle against so-called Islamic State presses on, and where thousands of civilians are in urgent need of assistance.

The few dinars the children make are precious. Even before the assault kicked off in May, banks along this 300-kilometre stretch of formerly IS-controlled coastline had been closed for more than a year.

Last week, the Pentagon announced it was launching airstrikes to support the UN-backed Government of National Accord (GNA) in its battle against IS, bringing hope of a military breakthrough. For local people scraping by on the edges of the fighting, the end of IS rule cannot come soon enough.

“The situation for us here is very serious because of the terrible shortages,” Ali, a resident of Ghardabiya, on the southern side of Sirte, tells IRIN. “Our most urgent need is healthcare. We have no hospitals and no access to any care.”

A 2006 census counted 150,000 people in Sirte, the hometown of former ruler Muammar Gaddafi. But an estimated 80 percent of the population has fled; some 50,000 in the last two weeks of April alone, when forces from another of the country’s three competing governments (this one based in the eastern towns of Tobruk and Beida) announced an offensive on Sirte, which never actually materialised on the ground.

A second government, installed in the capital by armed groups in 2014, is still persevering. Both reject the GNA - the third governing body which has limited recognition and power but has gained significant international attention by backing the fight against IS in Sirte.

“Where is NATO now?”

Tens of thousands of civilians displaced from Sirte have struggled to find shelter in other parts of the country. Hundreds of families have remained on the edge of the town, both throughout IS’s year-long rule and during the past three months of fighting.

Many of those who have stayed are too poor to afford rental costs elsewhere, or are farmers unwilling to abandon their livestock: their only source of income.

Homes are overcrowded. Many now host additional families who have fled the fierce ongoing battles in downtown Sirte, where IS still controls an estimated 28 square kilometres of territory.

Ali points out that many of of Sirte’s hospital staff had been foreigners. “[They] either fled or were imprisoned by IS, and gradually all the medicines ran out even before the fighting started.”

Fifty-two-year-old Amjid tells IRIN his wife hasn’t seen a doctor since becoming pregnant seven months ago. Both she and his four children urgently need vitamins and basic medicines. His youngest two children also missed out on vaccinations after stocks ran out in Sirte.

Amjid is concerned that children with otherwise curable diseases are now vulnerable and that patients with chronic illnesses like diabetes and high blood pressure are now in a very bad way.

Ali urges any of the three governments to reinstate whatever medical care they can in the areas liberated from IS.

“We can manage with almost nothing because we have become used to that,” he tells IRIN, but “people can’t manage without doctors and medication, and we urgently need help with this.”

Chronic food shortages exacerbate the medical emergency. Deliveries of food, as well as medicines, to Sirte stopped many months ago, after according to local media reports, IS repeatedly abducted lorry drivers.

In districts of the town newly freed from IS, behind shattered shop fronts, shelves are empty. The goods have long-since been sold or looted. 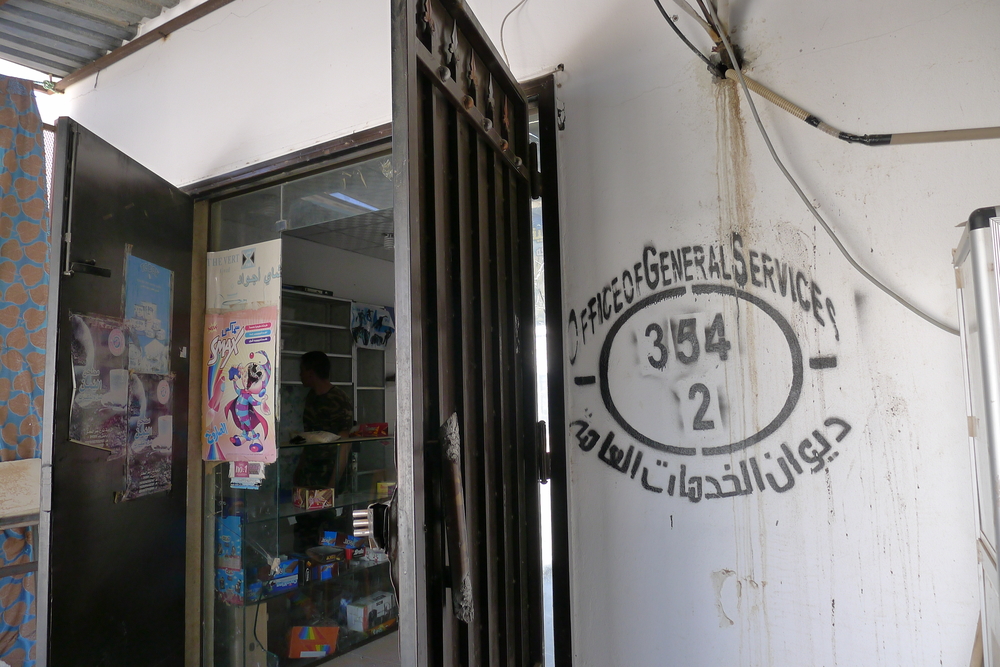 In Sawawa – an eastern suburb of Sirte, where IS was defeated in June – former engineer Mohammed stands outside the small shop he used his life savings to open five weeks ago.

Making even meagre supplies available to local people was a humanitarian decision, prompted by the desperation of his neighbours and friends, he tells IRIN.

“Nobody else came to help, so we have had to find a way to help ourselves.”

Mohammed says he tries to keep prices as low as he can, but even basic necessities are three times the price they were before IS took control in February of last year.

He has been appalled to find local people regularly scavenging outside the shop and says he ends up giving food away for free.

“I find people taking rotten fruit and vegetables from the rubbish because they have no money and are ashamed to ask for help, but I don’t let them. I always give them what I can,” he explains.

“I don’t care about the money. Many people here are seriously malnourished because they have absolutely no money and have been eating badly for a year. I have to help them. It is my duty.”

Those on the outskirts of Sirte are likely not the worst off. A number of families are said to be still trapped inside the town centre.

IS had reportedly forbidden people to leave initially and once Libyan forces surrounded Sirte in May it became impossible anyway as the militants maintained a relentless campaign of suicide attacks on military positions.

Any vehicle or person attempting to leave central Sirte is treated as a potential threat by the Libyan forces.

“We have been informed that there are still some civilians inside Sirte – just a few families – some of whom have a secret satellite internet connection,” Brigadier-General Mohammed al-Ghossri, spokesman for GNA operations in Sirte, tells IRIN.

“We have been told that they are okay and still have food, and we have instructed the Operations Room to minimise attacks in those areas.”

Al-Ghossri says he has publicised his contact details online, asking civilians left in the city to get in touch. He has not yet received any calls.

A group of men congregating outside Mohammed’s little shop say that while life is still tough, they are grateful for each small step towards normality.

“We had nothing under Daesh – no medicine, no cash, no banks, no schools, no healthcare and, along with long power cuts every day, we only had water for three or four days each month,” says Karim, 42, using the common Arabic term for IS.

Water supplies were restored to the suburbs a month ago, and two weeks later electricity was reinstated after a three-month hiatus. However, the supply to central Sirte remains cut, in an attempt to keep the pressure on IS.

“Life is starting to return to normal a bit. Not like before, but day by day it is gradually getting better,” says Mohammed optimistically, as the impact of another howitzer shell reverberates through the suburb. “We thank God that we have survived up to now.” 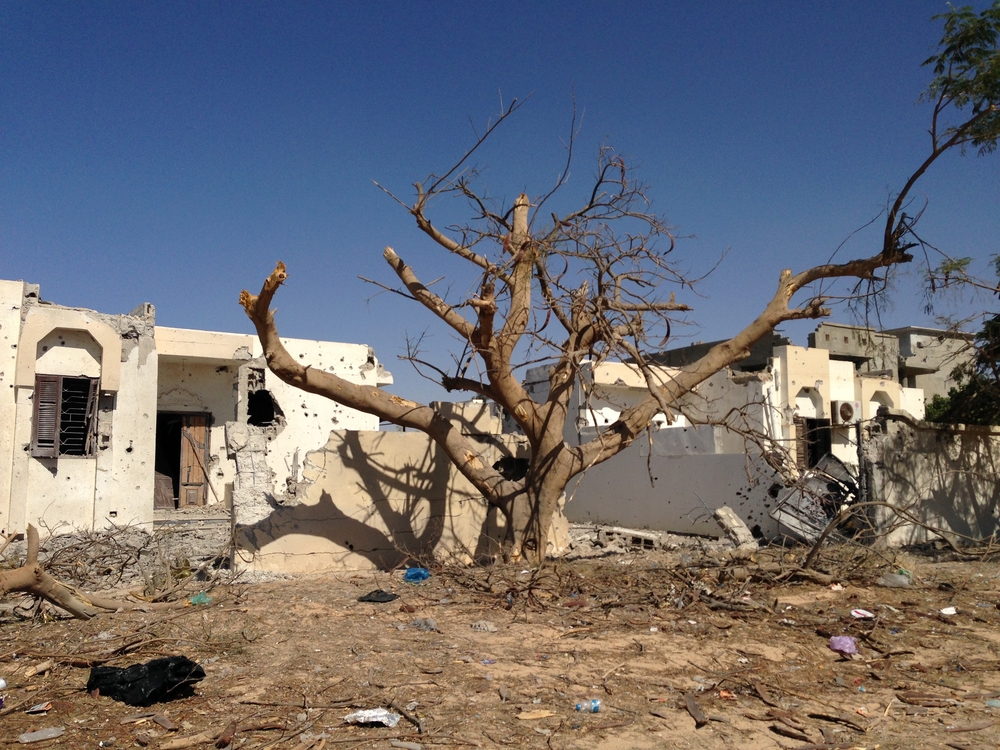 Tom Westcott/IRIN
Many Sirte homes have been destroyed by battle

The US airstrikes have given a boost to Libyan forces, whose advances into central Sirte had stalled over the last month.

But even if IS can finally be ousted, local people are conscious that recovering from their ordeal will take much longer.

“We suffered so many things under Daesh. They killed people every Friday in the town square and hung their bodies up in the middle of a roundabout,” Mohammed says. “We don’t even know how many they killed because, in the end, we kept our TVs and radios turned off because we didn’t want our children exposed to these horrors.”

Despite his best efforts, he admits his five children are all traumatised.

“They are so afraid and they keep asking me: ‘Dad, where are Daesh? Are they coming back?’” he says. “I tell them Daesh are nearly finished. I hope and believe this is true.”

(TOP PHOTO: Residential districts of Sirte are now occupied by IS snipers and said to be riddled with IEDs and mines. Tom Westcott/IRIN)