Read about what we achieved.
RIO DE JANEIRO

On Saturday night, as a predicted global audience of 900 million tunes in for all the razzmatazz of the opening ceremony, spare a thought for the many residents of Rio de Janeiro who have had their homes taken from them to make way for the Olympic Games, an event that lasts just 17 days.

Between 2009, when Brazil won the right to host the world's biggest sporting extravaganza, and 2015, 22,059 Rio families were resettled for a number of reasons, according to official figures.

The number of evictions directly or indirectly linked to the Olympics remains contested.

In an email to IRIN, Rio de Janeiro city hall said: “In the city's preparation for the Olympics, the only community affected by works related to sports facilities was the Vila Autódromo, nearby the Olympic Park.”

Vila Autódromo, a favela that had been home to some 900 families, was almost entirely demolished to make room for Barra Olympic Park, a cluster of nine sporting arenas where much of the action will take place. After a long and brutal eviction process, 20 families were able to remain on site, with new houses built for them.

The official number of evictions that took place for works directly or indirectly related to the Olympics is contested by human rights and advocacy groups, who estimate that more like 2,500 families were forced out.

The situation is not black and white. Some families, arguably, have benefited from being placed in newly built public housing blocks. And all those resettled either received new lodgings or at least some financial compensation.

But human rights defenders and advocacy groups maintain that this doesn’t justify top-down removals that they argue serve mostly to benefit the city’s real estate market.

Here’s a look at how life has changed dramatically for four different groups of Rio residents: 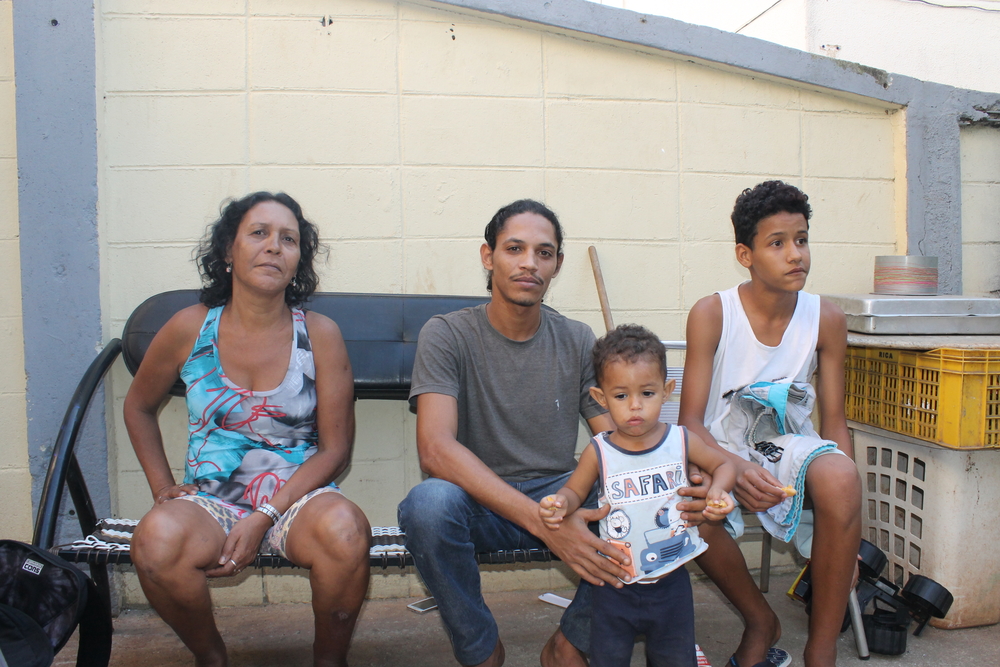 Raphael Richard, 26, and his mother Sonia Braga, 53, lived in a favela in Recreio dos Bandeirantes – a fast-developing beach neighbourhood – and were removed in 2010 along with some 194 other families.

They were relocated to a public housing unit in Campo Grande, more than an hour away from their old home, on the far western edge of Rio de Janeiro.

The settlement is located away from infrastructure and commerce in the region. The approach is semi-rural and is littered with huge volumes of dumped rubbish.

Raphael and Sonia were removed when city hall said they needed to make way for a rapid bus transit lane, one of the key transport legacies associated with the Olympics. Until now, however, nothing has been done in the space where the community sat.

“It’s like they removed us just for the sake of it,” says Raphael.

Raphael and Sonia both say they preferred living at their old house “1,000 times more”. Ideally, they would sell the house and move back to Recreio, but they haven’t received the final proof of ownership documents yet from city hall.

Raphael complains that transport options in the region are poor. There is only one bus, he says. It also only starts at 5am and sometimes he needs to leave earlier.

A painter who does informal jobs, Raphael used to be closer to the rich neighbourhoods where the better work was. Now, he faces longer commutes or has to accept lower local wages closer to his new abode.

Sonia, who has high blood pressure, complains about the long journey to see doctors. “If I get sick, I will die here,” she says.

The settlement and most of the area around it are also dominated by organised crime groups known as “militias”. These are typically made up of corrupt former and serving police officers who act as informal security in the absence of the state.

The groups are known to force residents and businesses to pay special “taxes”, and enforce their own laws and justice through violence. The Brazilian press has reported several cases of abuse in the settlement and “expulsions” for breaking the rules.

“Where we lived before, we didn’t see these things,” says Raphael. 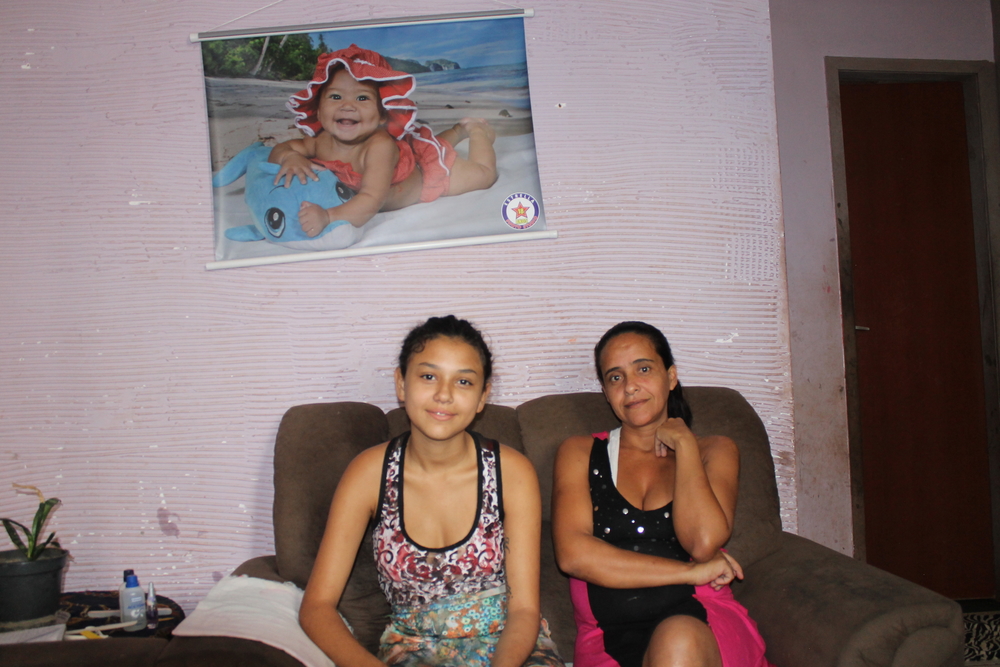 Sam Cowie/ IRIN
Margaret and Jenifer have a proper house now, but they worry about gang violence

Mother and daughter Margaret, 35, and Jenifer Lessa dos Reis, 16, used to live in an abandoned factory in the centre of Rio de Janeiro that was occupied by some 25 homeless families, each in their own partitioned wooden space.

The building was destroyed as part of a regeneration project of Rio’s degraded port area – including a hotel from US presidential candidate Donald Trump considered one of the main legacies of the Games.

Today, Margaret and Jenifer live in a public housing block in Senador Camara, a poor neighbourhood in Rio’s West Zone, more than an hour from downtown.

As the train approaches the station, about 20 metres from the platform, there is an open-air drug sales point. Drug users walk back and forth across the tracks. Motorbikes drive over the pedestrian train station ramp.

Margaret used to work as a domestic maid when she lived in the city centre, but today she looks after her sick son and receives a minimum salary from the government.

“I would prefer to be in the centre of the city because everything is close. Doctors for my son, everything,” she says. “But here, at least here I have a house. It’s healthier than the squat (in the factory).”

The neighbourhood is dominated by heavily-armed drug trafficking factions. Sometimes, gang warfare breaks out, meaning Jenifer – who has a one-year-old daughter – misses school.

“It was good there (at the factory) because you could play outside. Here, (you) can’t play outside because there is the risk of a stray bullet,” says Jenifer. “But apart from this I can’t complain.”

Simone de Conceicao, 40, lives with her husband and two children in the same public housing block as Jenifer and Margaret in Senador Camara.

Before being relocated, she also lived in a squat in the centre of the city that is undergoing a regeneration project regarded as another of the main legacies of the Games.

“I prefer being in the centre of the city. There, is better for work. I’d prefer to return,” says Simone, who works as a hairdresser and street hawker, selling beer and soft drinks.

She feels she is missing out as the Olympics would have been a golden opportunity for her to sell her goods to tourists in the centre of the city and in the beach districts. Her husband, who works in civil construction, has to leave the house each day at 4:30am.

“We have a good relationship with our neighbours we know from the city centre, but apart from that, no good things here,” she says. “The school is really bad and there is no work here.”

Isabel do Santos Ribeira, 57, likes her new apartment but fears losing it.

She used to live in an abandoned factory close by and when it was slated for demolition to make way for the rapid bus transit line she was happy be resettled in a new place.

However, after little more than a year, she is receiving legal demands to pay for the apartment, supposedly due to an admin error.

“We were told it was just going to be a key exchange,” says Isabel, who has heart problems.

Isabel was compensated with the alternative accommodation in exchange for agreeing to be resettled. But her decision, or the “admin error” she couldn’t have guessed would happen, has caused her serious consequences. Being unable to pay for the apartment, she has received a bad credit rating, which means she can no longer buy materials for her small sewing business on credit. She says she is currently depending on support from family and friends.

“City hall treats us like a stray dog. When we call, they don’t answer,” she says. “My biggest fear is losing the house.”

*This story was amended to take out a reference to the opening ceremony after the plans changed.