Yusra al-Khatib is scrolling through photos of her husband, Bassam Mughrabi, on her smartphone.

The couple have lived apart for three years, ever since Mughrabi fled their war-torn hometown of Yabroud, Syria, and made his way to Germany. It used to be a proper partnership. He supported their six children by working in construction, while she took care of their home. Now, their relationship has been reduced to a flurry of text messages, selfies and voice recordings on WhatsApp, Viber, and Facebook Messenger.

Al-Khatib, who is 40, says she tried to join Mughrabi in Europe via family reunification procedures. After being told by the German embassy in Beirut that she would have to wait until 2017 for a visa interview, she decided to take matters into her own hands. In February, she and four of her children, aged seven to 20 – along with her sister-in-law, Khadeja, and her five children – paid smugglers a total of 6,000 euros to cross the Aegean Sea in the hope of reaching their husbands.

Their trip was cut short by the shutdown of the 'Balkan Route' to northern Europe, which trapped some 54,000 refugees and migrants in Greece. Now their main roadblock is bureaucratic: a Greek asylum system so overwhelmed that it's nearly impossible to get an appointment and avenues for family reunion within Europe that are painfully slow.

For these two women – and thousands of other families separated by Europe’s border closures – they finally reside on the same continent as their loved ones, but feel no closer to actually being with them.

"He is trying to pull us to him and we can't get there. I would do anything to be with him again," said al-Khatib, who spent five weeks shivering in a small plastic tent with her children at Idomeni, a squalid, makeshift refugee camp at the Greek-Macedonian border. After giving up hope that the border would reopen, they moved to Veria, an official camp 70 kilometres from the city of Thessaloniki with much better living conditions.

Asked how many of the camp's 400 residents were women and children trying to join husbands and fathers elsewhere in Europe, al-Khatib lost count at 18 families.

Last year, the vast majority of the one million asylum seekers to reach Europe by boat were men, many of them young, single and travelling alone. By February, nearly 60 percent of those risking their lives at sea were women and children, according to the UN’s refugee agency, UNHCR.

One reason for the changing demographics, aid agencies say, is the lack of safe, legal ways for people trapped in warzones or living as refugees in the Middle East to join family members already in the European Union.

Although EU legislation recognises a refugee’s right to be reunited with their immediate family, a number of member states are making it extremely difficult to realise, with increasingly restrictive eligibility criteria and onerous bureaucratic requirements.

Austria passed the most restrictive changes in April. In addition to allowing police to turn away asylum seekers at the border, new legislation increases the waiting period for family reunification to three years for holders of subsidiary protection, a type of protection for people who do not fit the criteria for refugee status but cannot be sent back to their countries of origin.

In Germany, those with subsidiary protection must now wait two years before they can apply for family reunification, while recent amendments to Sweden’s asylum law mean that subsidiary protection holders have no right to apply for it at all. Other countries, such as Finland, are introducing income requirements for refugees seeking to bring family members to the country.

Those like Yusra and Khadeja al-Khatib, who have made it into the EU but are stuck in Greece, have two main legal options to rejoin family members elsewhere. First, they must apply for family reunion under the Dublin Regulation, which decides which country is responsible for processing an individual’s asylum claim. If that fails, they can try to reunite via the EU's official relocation scheme, which takes family ties into account when determining which member state to transfer asylum seekers to.

Both procedures are excruciatingly slow. Only 909 of a promised 66,400 people have been moved from Greece to other EU countries under the relocation scheme since last September, and only certain nationalities with high rates of refugee recognition qualify.

According to Daphné Bouteillet-Paquet, a senior legal officer with the European Council on Refugees and Exiles: “People often have to wait a good year before enjoying family unity under Dublin… it is quicker and more efficient to turn to the services of smugglers."

As with family reunification from outside Europe, most member states only allow reunion under Dublin for immediate family -- typically spouses and children under 18 years old. Adult children and families formed in transit countries like Turkey are usually excluded. This means that Yusra al-Khatib's 20-year-old daughter won’t qualify to join the rest of family in Germany, and another recently engaged young woman in Veria camp may not be able to reunite with her fiancé.

The documentation requirements for Dublin requests also pose a major hurdle for families who fled their homes without crucial paperwork, such as marriage licenses and birth certificates. Insufficient documentation is often grounds for denial.

"We have seen families being torn apart, because if they cannot prove the family link, they could be assigned to different member states under Dublin," Bouteillet-Paquet said.

A lack of legal help means that women like Yusra and Khadeja al-Khatib are often left to navigate the complex family reunification process on their own.

But before they can even begin the process, they must secure an asylum interview, something that has proved impossible for many. Since late March, the Greek Asylum Service has only allowed people to make appointments for their asylum interviews via Skype. But many of the refugees are staying in camps with no WiFi access and spotty cellphone service. Even those with internet access complain that they can’t get through on the Skype number. In Veria last week, almost no one had an appointment yet.

Beginning in late May, the Greek Asylum Service says it will start visiting camps throughout the mainland to register asylum claims. Through this "pre-registration exercise", which is supported by UNHCR and the European Asylum Support Office, asylum seekers will receive an appointment for an interview along with an international protection card, which will give them access to public health services and the school system.

The process is expected to take two months, with all asylum interviews to take place by the end of the year. To meet this goal, the Greek Asylum Service will need to conduct more than 6,000 interviews per month – a tall order for an agency that processed just 1,100 asylum claims a month in early 2015.

The women at Veria feel no closer to having a clear timeline for when their families will be whole again. 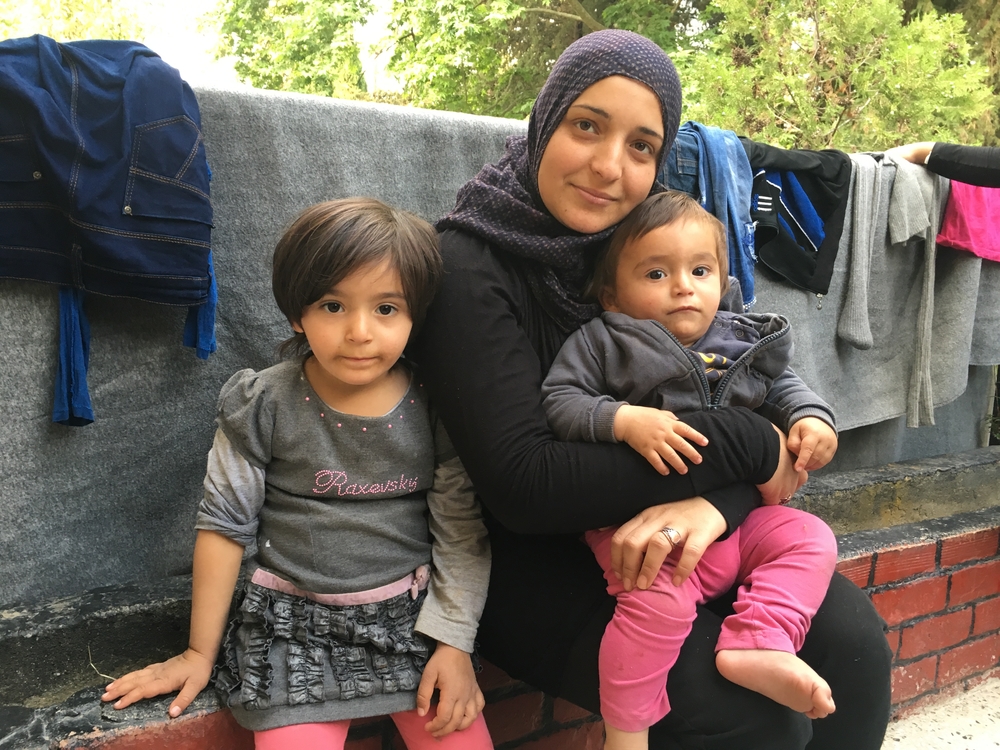 "It's disappointing and lonely, even with the children," said Abeer Hammood, a Syrian mother in the camp whose husband is also in Germany. "It's like I'm living, but without my soul."

In a fit of tears one night, her husband said he would cancel his asylum application in Germany and come to Greece to be with her. Despite how much she misses him, Hammood convinced him not to.

Last month, soon after being granted refugee status in Germany, Yusra al-Khatib's husband came to visit his family on a special refugee passport. He flew to Thessaloniki, then took a bus to the camp. Yusra waited for him at the camp gate.

For a few short days, it felt almost like a vacation. "But I hated him seeing us here, living like this," she said.

In what seemed like the blink of an eye, he was back in Germany and the waiting game began again.