Newcomers don’t want to stay long in Obock. In the summer, 50°C temperatures and ferocious sandstorms sear this dusty port in Djibouti’s underdeveloped north. And yet this small town has become a haven for two very different groups. Travelling south are refugees fleeing the war in Yemen, 25 kilometres away across the Bab-el-Mandeb strait. Heading in the opposite direction: Ethiopian migrants taking smugglers’ vessels towards the very same conflict.

Nearly 35,000 people have made the journey southwards across the strait (which translates as ‘Gate of Tears’) to the tiny authoritarian state of Djibouti since March 2015, when Houthi Shia rebels overthrew the Yemeni government and Saudi Arabia responded with a relentless bombing campaign. Just over half are Yemeni. According to the Regional Mixed Migration Secretariat, which monitors movements between the Horn of Africa and Yemen, the rest are Somali refugees, Djiboutian returnees and other nationalities.

The Somalis and a small number of Eritreans are transferred to two camps in the south of the country and most of the Yemenis move on to Djibouti City, the capital.

But not all have the resources to do so. Many of the 3,000 refugees stuck at Markazi camp, a few miles outside Obock, have already endured one summer of the hot, dusty winds known locally as the khamsin. The winds are so strong they can uproot tents and the refugees are dreading their arrival again this summer.

“We are scared [of] staying for another one, [but] what can we do about it?” asks Fawaz, who worked for an oil company in Aden before moving his wife and their four young children to Yemen’s capital Sana’a and then to Djibouti as the civil war spread. His tone is injured, close to anger. “We cannot move. So we have to suffer again.” 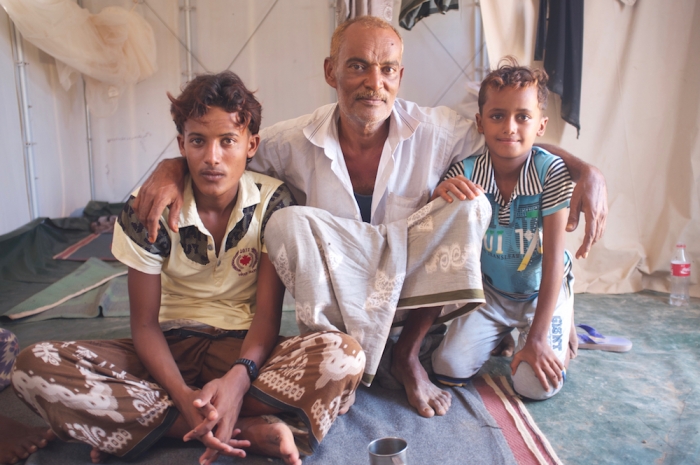 The well-educated Fawaz, who teaches English to 55 students in the makeshift secondary school, is something of an oddity in the camp. Most of Markazi’s residents are from poor, fishing villages on Yemen’s Red Sea coast. Abdullah, a 50-year-old father of six, thought he and his family would only be in Djibouti for a few days when they boarded his boat in September 2015 to avoid the Saudi bombs raining down on the village of Bab-el-Mandeb. “Prison in Saudi Arabia is better than this place,” he says dryly, sparking knowing laughter amongst the other refugees sheltering from the burning sun in a tent furnished with thin sleeping mats.

More than 500 Yemenis have decided war is preferable to the bleak desert camp and have headed home in their boats, ignoring warnings from the UN’s refugee agency, UNHCR, that the security situation is still volatile. 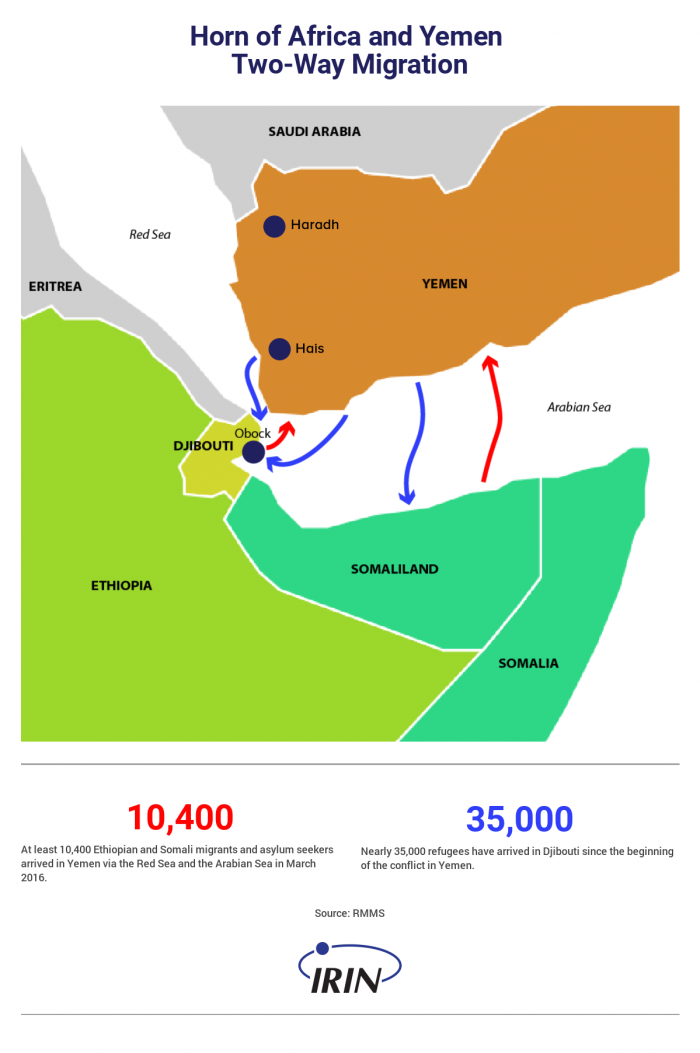 Among the few hundred returnees heading back across the strait to Yemen are smugglers’ boats carrying migrants from Ethiopia, as well as a smattering of Somalis. More than 92,000 migrants, almost 90 percent of them Ethiopian, arrived on Yemen’s Red and Arabian Sea coasts in 2015, according to RMMS data. The pace has continued in 2016, with more than 10,000 migrants landing in Yemen in March (another 65 didn’t survive the crossing).

Mostly men from Ethiopia’s Oromo ethnic group, they continue to make use of this centuries-old trade route, to escape oppression and discrimination back home, and in pursuit of jobs as taxi drivers and plantation labourers in Saudi Arabia and the Gulf states.

Bram Frouws, a coordinator at RMMS, says that most know about the conflict in Yemen, which has killed at least 6,400 Yemeni people and displaced 2.8 million others from their homes, but view it as a necessary way station en route to Saudi Arabia in search of a better life. He speculates that the chaos of war may even mean that “they think it’s easier to transit through Yemen irregularly and undetected”.

The majority of migrants from the Horn of Africa now depart from Somaliland rather than braving the four-day walk through barren desert to reach Obock from the Ethiopian-Djiboutian border. The Djibouti route via Obock and the Red Sea has also gained a reputation for being more dangerous, with smugglers routinely assaulting, robbing and abducting their charges and holding them for ransom once they reach Yemen.

But despite the higher risks, at least 1,300 migrants departed from beaches on the outskirts of Obock in March.

Jamal Faraja, 31, from Ethiopia, crammed into a smuggler’s boat that departed from Obock more than four months ago.

Dropped just offshore from Hais – a small Yemeni town about 80 kilometres to the south of the coastal city of Hodeidah – they were met by local armed men who locked them up in a walled enclosure for weeks.

“They [the armed men] were forcing us to call our families back in Ethiopia to send money,” Faraja told IRIN from a roadside marketplace in Raboo Matwala, near the bombed-out town of Haradh.

“Four Ethiopians were killed in front of my eyes,” he said.

Faraja survived but was left penniless. After being released, he and nine other migrants walked for 10 days to reach Raboo Matwala, 350 kilometres away from Hais. Now they beg for food at the marketplace and sleep in a warehouse used during the day by local sellers of khat ––a mild stimulant leaf chewed by most Yemenis. 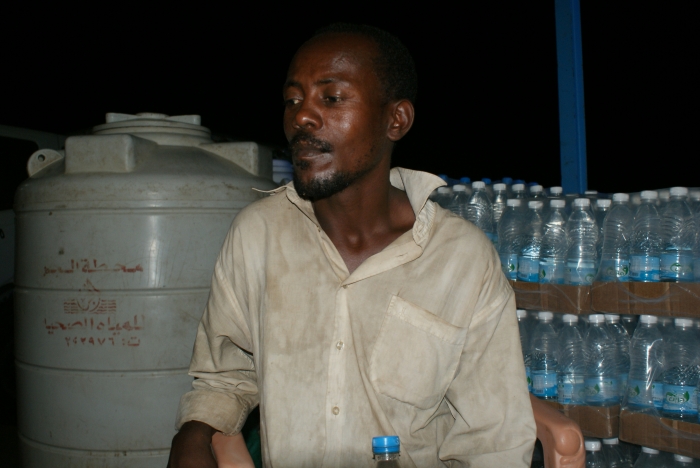 According to Ali al-Jefri, a field officer with the International Organization for Migration in Djibouti, migrants who avoid abduction by their smugglers often end up in prison. “Houthis round up all migrants going to Saudi Arabia,” he said.

Trapped in a foreign war

Those who survive the sea crossing and manage to evade arrest make the long trek on foot from the narrow coastal plain of Tehama in Hodeida Province to Haradh in the north, just 10 kilometres from the al-Tuwal border crossing.

But the anarchy in Yemen has made even approaching Saudi Arabia’s tightly controlled border virtually impossible. Not only has the border area been subjected to semi-daily airstrikes and artillery barrages, but Houthis are manning checkpoints on the road to Haradh, preventing migrants from passing or getting anywhere near the border.

IOM used to run a centre to assist African migrants stranded in Haradh, but last May the facility was struck by an airstrike, killing five Ethiopians inside. IOM shut down its operations in Haradh, and the few aid agencies still operating in the area are struggling to respond to the needs of thousands of people displaced by the conflict, let alone the needs of the migrants.

IOM has managed to evacuate 3,500 Ethiopian migrants from Yemen since June 2015, the majority of them from prisons in the Houthi-controlled port of Hodeidah. Among them was 25-year-old Ali Ahmed Ibrahim, from Ethiopia’s Oromia Region. His family sold cows to fund his “very exhausting and dangerous” journey to find work in Saudi Arabia.

“I really don’t know,” Ibrhaim tells IRIN, when asked about his hopes for the future. “Maybe I will try to go another time when things are better in Yemen, but I don’t see a future in Ethiopia.”

Faraja, who has a wife and young son waiting for him back home in Alitena in Ethiopia’s northernmost Tigray Region, says he plans to wait out the war in Yemen, possibly even to find work on one of the khat farms in the central province of al-Baydha, and then attempt the crossing into Saudi Arabia.

Others are desperate to get back home.

Ibrahim Ali Youssif, a 40-year-old from Ethiopia’s Amhara Region who crossed the Red Sea over six months ago, hopes to find a way to return to his hometown of Dessie. He has been unable to make contact with any organisation that can help him, including the Ethiopian embassy in Sana’a.