One of the first stops for people fleeing the conflict in Sudan’s South Kordofan region is the town of Yida, 20 kilometres across the border in South Sudan.

The town shelters more than 70,000 Sudanese refugees who have set up homes, businesses and have established themselves within the local community.

But now, in an effort to decongest Yida and provide better services, the government and humanitarian partners are trying to persuade them to relocate to an official camp in Ajuong Thonk, further south in Unity State.

It was established in 2013 to shelter civilians fleeing the fighting between the Sudanese government and rebels of the Sudan People’s Liberation Movement-North (SPLM-N) and the Justice and Equality Movement (JEM).

The camp shelters 31,000 – a population that has more than doubled over the course of 2015 – and is likely to expand further still with the end of the rainy season, which will ease travel across the border.

The government has been asking people to move for two years. Now it has set a deadline – it wants all refugees to relocate from Yida by July.

With the camp in Ajuong Thonk fully operational, “we will encourage them to go there gradually,” explained John Dabi, deputy chairman of the Commission for Refugee Affairs.

But the response from refugees in Yida has not been uniformly positive.

Idrif, who arrived in South Sudan more than two years ago, explained that Yida’s proximity to the border means he can cross back and forth to check on his village whenever the fighting permits.

The downside of living in Yida is that the humanitarian organisations only provide emergency food – not the full panoply of services available in Ajuong Thonk – and even those rations might be squeezed as an inducement to move.

“Why don’t the humanitarian organisations bring all the assistance to Yida, where most of the refugees are?” complained Idrif, who heads a family of eight.

Too close to the conflict

Yida is an important economic centre for both the host community and refugees. It boasts markets, farms, transport services and basic schools. An announcement on 27 January by Sudanese President Omar al-Bashir opening the border with South Sudan merely recognised the existing reality.

“Sudanese fleeing the conflict in the war-torn Nuba Mountains will continue to use irregular routes to seek asylum in South Sudan. Using a border crossing point manned by Sudanese government officials would not be an option for them for obvious protection reasons,” said Rocco Nuri, spokesman for the UN refugee agency, UNHCR.

See: The Nuba: Prisoners of Geography in South Kordofan

But they are fleeing into a region hit by food shortages as a result of South Sudan's own conflict. The UN has warned that the country is facing unprecedented levels of hardship, with people displaced by fighting further south in Unity State at particular risk in the coming dry season, between April and July.

UNHCR supports the government’s decision to relocate the refugees, arguing that Yida is too close to the border and the fighting to the north. Its proximity “creates threats to the security of refugees and undermines the principle of the civilian character of asylum,” said Nuri.

Yida is inside “a military area,” explained Dabi. “We need to keep the refugees away from it.”

Rebel JEM and SPLM-N combatants are a constant presence in Yida, and it’s known that some of them have relatives among the refugees. Although part of Sudan, South Kordofan is home to many pro-South Sudan communities. Protesting their marginalisation, they fought alongside southern rebels in a war that culminated in independence for South Sudan in 2011.

Ajuong Thonk has its attractions. It boasts in-camp roads, a primary healthcare centre, three primary schools, a secondary school and a computer lab. 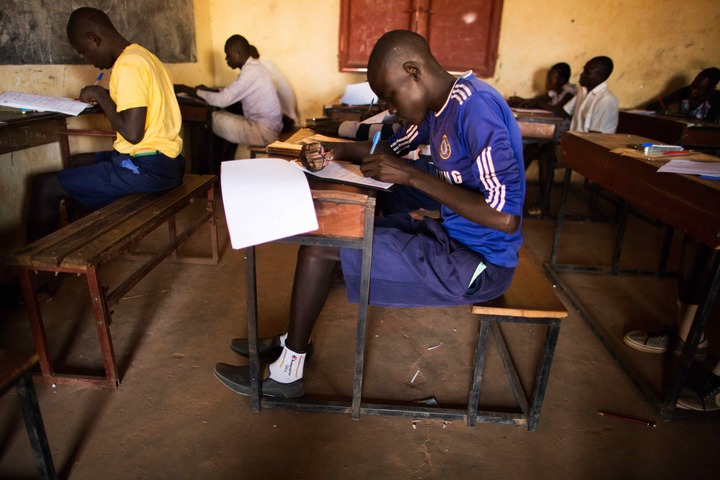 Saddam Tia, 17, walked for more than two days with his 10-year-old cousin, Hassan, to reach South Sudan from their village of Angolo. A Sudanese government airstrike killed his mother, destroyed his school, and he doesn’t know the whereabouts of his father.

“I just want to continue my education in the refugee camp and become a doctor,” he told IRIN.

See: One surgeon for an entire war

Around 60 percent of Sudanese refugees are minors, looking for an opportunity to complete school in South Sudan. Some 11,000 students receive primary and secondary education in Ajuong Thok, supported by NGOs, the UNHCR and the South Sudanese government.

The irony is that more than half South Sudan’s own children are out of school – the highest rate in the world – largely as a consequence of its own civil war, which broke out in 2013. During the conflict, schools have been destroyed or turned into barracks, with children increasingly conscripted into the ranks of government and rebel forces.

Elizabeth Aldukun travelled for three days from her home village of Amdorein in South Kordofan with six children. “I came to South Sudan because my husband fled to Khartoum and I need to give a better future to my kids,” she told IRIN in Ajuong Thok.

“Wouldn’t it be better if the humanitarian organisations could bring all these services to our original villages [in the north],” she added.

Despite being one of the poorest countries in the world, South Sudan hosts more than 263,000 refugees, mostly from Sudan. neighbouring Central African Republic, the Democratic Republic of the Congo and Ethiopia. The number is expected to reach 300,000 this year.

As a result of South Sudan's conflict, as many as 2.8 million people – nearly 25 percent of the population – are in urgent need of food assistance, the UN warned this week.