The Sudanese asylum seekers and refugees had been protesting for more than a month when the police came to deport them late December. Hundreds were camped outside the Amman offices of the UN’s refugee agency, UNHCR, driven to desperate measures by poverty and hopelessness in Jordan, where life for many has been on hold for years.

They’d demanded more support, and resettlement to a country where they could build a life for themselves. “We can’t carry on like this,” Hatem, a protestor whose name has been changed to protect his safety, told IRIN.

But instead of relief, around 600 Sudanese were returned to Khartoum. International agencies agree they’re not safe in Sudan, where ongoing violence has claimed the lives of hundreds of thousands and displaced millions. But the danger refugees face in Khartoum did not deter the government from sending them back.

“We didn't expect… what happened,” Hatem said, continuing, despite the deportations, to state his respect for the Jordanian government.

At the beginning of what’s already set to be a tough year, the forcible return is a grim indicator of the growing insecurity refugees in Jordan face. With the neighbouring war in Syria entering its sixth year, some 630,000 Syrian refugees are now registered in the kingdom. But they’re just the largest and most high-profile group among almost 700,000 refugees and asylum seekers from more than 40 different nations.

The protest that prompted the deportation was symptomatic of Jordan’s larger refugee crisis. Many of those camped outside the UNHCR offices said they were unable to pay rent and couldn’t afford food: they had, they simply said, nowhere else to go.

“How long can refugees continue, just on the basic assistance we’re providing?” Aoife McDonnell, spokeswoman for UNHCR in Amman, told IRIN. Most refugees in Jordan, including Syrians, don’t have permits to work legally. Access to employment, she added, will continue to be an issue as the years they spend in the country stretch onward.

“Their savings are gone. The money’s gone. The media lost interest for quite some time,” she said. “Various populations feel they’re being forgotten about.”

Thanks to limited funding, UNHCR aid offers very limited relief. A minority of refugees – mostly vulnerable families, such as those headed by women – receive monetary support of a few hundred Jordanian dinar (300 JOD is $423) each month. Others are eligible for emergency funding and receive winter aid for heating and essentials, and some groups receive food vouchers and non-monetary support including housing.

Beyond that, many refugees are largely left to support themselves – chiefly with illegal, precarious and low-paid work. The chance of escape through legal resettlement to a better life is low: only 2.9 percent of Jordan’s Sudanese population – which numbered just 3,500 before the deportation – have been resettled to a third country. For Syrians, the rate is even lower, at 2.3 percent.

“The difficulty is how can we – and it's not just the Sudanese but the whole population of concern – how can we continue to give hope to these people,” McDonnell said.

For the Sudanese community and those working with them, the Jordanian government’s move came as a shock. A mass deportation of this scale is unprecedented in Jordan. It’s in flagrant violation of the international legal principle of non-refoulement, which states that people of concern must not be returned to a place where persecution threatens their life or freedom, and it took place under the nose of the very agency meant to protect refugees.

“At no stage was deportation [thought to be] on the cards,” McDonnell told IRIN. Several sources reported to IRIN that high-level international advocacy efforts tried – and failed – to put a stop to the government action. “It was a peaceful protest. It does not warrant a deportation,” McDonnell added.

Many of the humanitarian and human rights workers IRIN spoke to believe that the deportation was a warning from Jordan. Unrest, the repatriation seems to suggest, will be not be tolerated by the government. Refugees who protest to better their circumstances cannot assume their rights will be respected, nor that the international community can do anything to protect them.

“It has reverberations within the wider refugee community to know that Jordan is capable of this, that they can do it and they can get away with it,” Adam Coogle, a researcher for Human Rights Watch in Jordan, said.

“[The deportation also means] that Jordan’s donor countries are either powerless to stop it, or decided not to push back on behalf of vulnerable refugees.”

A senior source at an NGO that works closely with Sudanese refugees, agreed. “Despite these deportations being completely beyond the pale, it is not that surprising that the government responded sternly,” he said. “The government is very concerned about losing control of the refugee situation in the country.”

Representatives of the Jordanian government did not respond to IRIN’s requests for comment.

At the time of the deportation, Jordanian government spokesman Mohamed Momani told journalists that the Sudanese deportees were in the country illegally because they had entered the country on medical visas. It’s a claim that was dismissed by the UNHCR and Human Rights Watch. The vast majority of protesters, they said, were registered as asylum seekers or refugees, and the way individuals enter a country – or flee where they’re in danger – does not delegitimise a claim to asylum.

In the Sudanese community, the effects of the deportation are already being felt. Sudanese refugees have historically been relatively well-organised when it comes to community support and activism. But now the fear of a crackdown means many are too afraid to even go outside, or try to find the work they need to survive every day. Protesting, when they know it could mean deportation, now feels impossible.

“We don’t know how to change it,” Hatem told IRIN.

“If some of us… protest, then we’ll be deported. We’re puzzled [about] what to do. We want to find safety and tranquility here, but some of us are even afraid to go to the UNHCR now.”

For Syrians living in Jordan, this fear is more familiar. Their country’s close proximity to Jordan, and the ease with which the government can invoke security justifications, means deportation has been a real threat for some time. Forcible returns to Syria have also been documented by human rights watchdogs.

"The sort of chilling effect that you could be deported has been felt by the Syrians since the beginning, maybe, of 2013,” Coogle explained.

“Because they know, they all know someone who got taken and maybe sent back. The Syrians all know that you better not do a damn thing.”

What does this mean for the future of providing for refugees? Among development and human rights professionals, there’s a concern that the deportation is indicative of a serious shrinking of humanitarian space. If 2016 is a year that sees other concerns – whether that be security, politics, fear of unrest or simply pressure on resources – override refugees’ basic rights for protection and aid, it will mean further, deepened hardship for those seeking a safe haven in Jordan.

And with 12,000 Syrian refugees Tuesday confirmed to be stranded at the border with Jordan – officials had previously said the number was an exaggeration – access to refuge in Jordan looks to be under even greater threat. 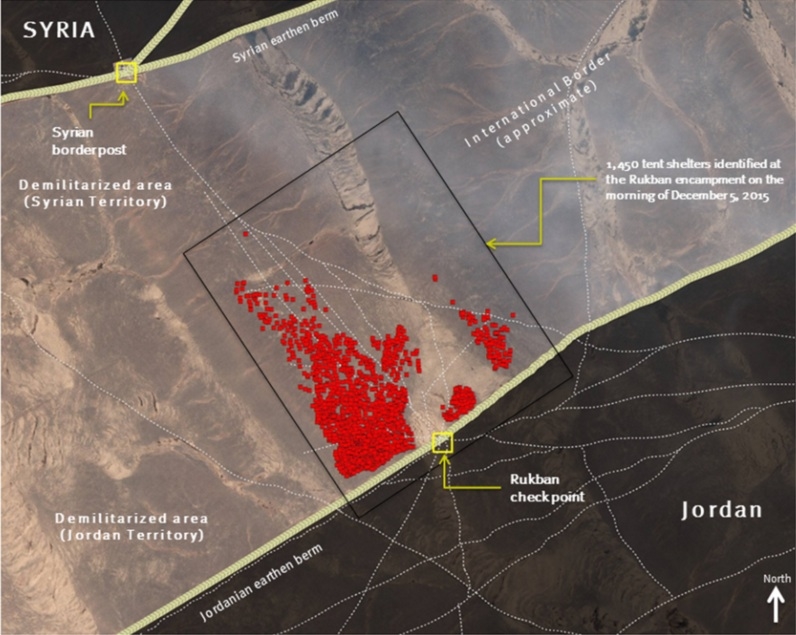 Aid agencies report that the humanitarian situation at the border is becoming increasingly grave: freezing temperatures and snow falling in the region are adding to the poor sanitation and malnutrition that were already threatening the lives of those who are trapped. But Momani said security concerns prevent the authorities letting refugees enter in large numbers.

“No matter how much support is provided, people aren't going to go home,” UNHCR’s McDonnell said. “And as the international community, the focus has to be to find political solutions, and countries cannot continue to absorb more and more people who, as time goes on, become more vulnerable.”