It’s not unusual to find dead bodies in Bujumbura these days. We discover them on the streets, in drainage channels, bushes and rivers.

The UN has registered 134 killings since April, when President Pierre Nkurunziza prompted protests by announcing he was running for re-election, despite having already served what many saw as his constitutional limit of two terms in office.
On Friday morning, gunfire broke out again downtown, shattering the beauty of the kind of day you only get just before the rains come. This time it was a moneychanger around my age and his boss who were shot. The moneychanger’s wife, a mother of two young children, was unable to speak when I called her.
How did we get here? How did we begin sliding into hell again? To try to understand the extent of the crisis it’s worth looking back at the key events of the past few weeks.
1 August
Opposition politicians and civil society leaders gather in Addis Ababa to create the National Council for the Restoration of the Arusha Accords and the Rule of Law, or CNARED. (While not legally binding, the August 2000 Arusha Accords paved the way for the end of a civil war ignited in 1993 and detailed how Burundi should be governed. A two-term limit was a key provision). CNARED’s raison d’etre is to get Nkurunziza out of power. For its members, the only issues to negotiate are the terms of his departure.

Around the same time, the ruling party announces that national dialogue will resume soon. While CNARED members will be allowed to attend, they will not be able to do so under the banner of this organisation. Despite talk of reconciliation, there is no let-up in the killings.

2 August
Former intelligence chief Adolphe Nshimirimana, widely seen as the president’s right-hand man – and the military commander of the CNDD-FDD when it was a rebel group (it is now the ruling party) – is killed in a rocket attack in the capital together with three bodyguards. Amid international condemnation of the killing, Nkurunziza takes the unusual step of addressing the nation. Arrests are made and tension mounts further. A correspondent for RFI and AFP is attacked and hospitalised.

3 August
Pierre-Claver Mbonimpa, president of the Association for the Protection of Human Rights and Detained Persons, narrowly survives an assassination attempt. His international renown in human rights circles ensures he is allowed to travel abroad for treatment, even though a court had ordered him to remain in Bujumbura while he faces criminal charges of endangering state security over claims he made last year about the militarisation of the ruling party’s youth wing.

One diplomat described the assassination attempt as a “shameful attack against a man who has worked tirelessly and relentlessly to protect the rights of others.”
4 August
A local ruling party representative is killed by unidentified gunmen while travelling to his office in Kiyenzi, 21 kilometres south of Bujumbura.

15 August
Jean Bikomagu, chief-of-staff of Burundi’s armed forces from 1993 to 1996, is assassinated in a motorcycle drive-by shooting on his way back from church. His daughter is shot and seriously wounded but survives. Like his erstwhile rebel counterpart Nshimirimana, Bikomagu would have been one of the key personalities to appear before a future truth and reconciliation commission.

20 August
In a ceremony brought forward six days with barely any notice, Nkurunziza is sworn into office. State media are told about the event in the morning, while other journalists, myself included, receive text messages just a few minutes beforehand, and in many cases are prevented from attending by the presidential guard. No foreign heads of state attend.
Over the following weeks, gunfire sporadically breaks out in opposition areas of Bujumbura. There are more arrests and bodies continue to be found in different parts of the capital. 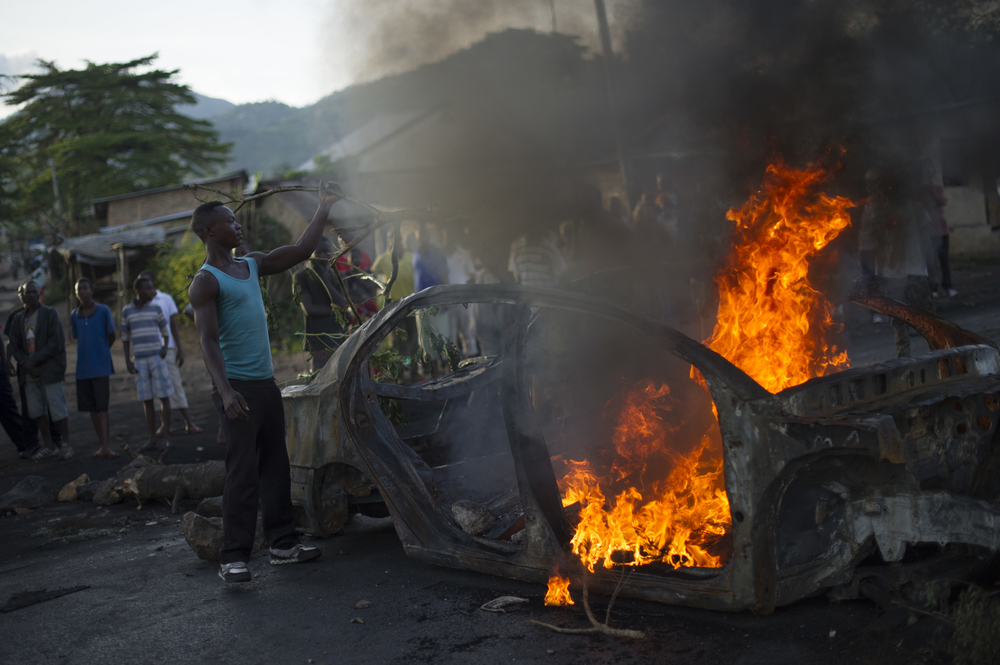 Burundi
Phil Moore/IRIN
A protestor fuels a burning barricade in the Musaga neighbourhood of Bujumbura, Burundi, on May 4, 2015.
Human Rights
Conflict
Who is Burundi’s coup-maker?
A protestor fuels a burning barricade in the Musaga neighbourhood of Bujumbura, Burundi, on May 4, 2015.
Photo: Phil Moore/IRIN
Bujumbura has been rocked by political violence for months.
7 September
Patrice Guhungu, the spokesman of a small political party whose leader was murdered in May, is shot dead in front of his house. As the authorities announce an investigation, party acting head Chauvineau Mugwengezo says: “It is clear the government of Pierre Nkurunziza had a hand in this odious crime because it is part of a series of assassinations targeting all those who dared say no to his illegal third mandate.” Mugwengezo flees into exile saying he has also escaped several assassination attempts.
11 September
Army chief-of-staff Prime Niyongabo, who played a key role in putting down a coup attempt in May, narrowly survives an ambush. Seven of his bodyguards are killed. In a photo taken by a witness to the attack, I see that one victim is wearing a wedding ring. I think about another wife widowed, more children losing a father, another extended family losing a breadwinner.
14 September
United Nations human rights expert Pablo de Greiff warns that “the international community, regional and international organisations included, cannot afford to simply stand by and wait for new mass atrocities to recur" in Burundi. "This would risk a major conflict in the Great Lakes region, the proportions of which no one can predict.”

22 September
In a message read out in all of the country’s Catholic churches, Burundi’s Conference of Catholic Bishops appeals for the resumption of “real dialogue” that excludes none of the actors in the crisis. The message condemns a “very worrying security situation” characterised by assassinations, abductions, torture and arbitrary detention.

23 September
Nkurunziza signs a decree creating a national commission for inter-Burundian dialogue to lead negotiations for six months, with 15 members drawn from different sectors of public life and acting under the aegis of the president’s office. Several civil society leaders express scepticism about the commission’s chances of success.
28 September
UN High Commissioner for Human Rights Zeid Ra’ad Al Hussein warns of an alarming increase in killings, arrests and detentions in Burundi during the month of September and says “a number of people were arrested by the police or national intelligence service before their death.
“This succession of unexplained murders and the widespread impression that they could be linked to state institutions instils deep fear in the population, especially in areas known for their support of the opposition,” he says.
Of the 704 arrests recorded in September, most people were generally released after a few hours, according to the commissioner, but some have spent months in detention, far longer than the legal limit.
29 September
Jean Baptiste Nsengiyumva, a leading opposition figure in Muramvya Province, is assassinated.
30 September
The European Union imposes an asset freeze and travel ban on three officials close to Nkurunziza for their alleged use of excessive force against opposition protestors, and on a former general who took part in May’s attempted coup. The government later describes this move as illegal and counterproductive.
3-4 October
Between eight and 15 people are killed in various incidents across the capital. Police accuse opposition supporters of sparking the violence by attacking officers. Witnesses report gunshots and explosions throughout Saturday night. It remains unclear who carried out the killings.
--
Amid all this, hope is hard to come by. I worry also about the risk of conflict spreading beyond Burundi’s borders. There are now some 180,000 Burundian refugees living in Tanzania, the Democratic Republic of Congo, Rwanda, Uganda, and Zambia, some of which are still struggling with the aftermaths of their own past wars and facing their own disputes about presidential mandates. What will happen in those refugee camps if war breaks out here? Burundi has already accused Rwanda of training rebels to destabilise this country.
For now we seem to be going backwards in many ways: in terms of national unity, security and the economy. Meanwhile, internationally, Burundi appears to be sidelined as the world’s attention focuses on Syria, Afghanistan and the refugee crisis. The proposed national dialogue can only work if outside pressure on all key stakeholders is stepped up.
Recent killings by police in the United States led to the slogan “Black lives matter,” meaning African Americans. My message to the world now is: “Burundian lives matter, too.”
dn/am/ag
Share this article
Join the discussion