Despite Thailand's recent deportation of 109 ethnic Uighurs to China where they could face torture, about 60 members of the persecuted minority who remain in detention are refusing to register with the United Nations as asylum seekers.

Uighur activists say the detainees are likely reluctant to apply for asylum because they do not trust that the UN will be able to prevent their deportation, and they are afraid that personal information provided during the registration process could fall into the hands of Chinese authorities and endanger their families.

Seven weeks after Thailand deported the group of 109 to China, the future is uncertain for the remaining Uighurs, a Turkic-speaking Muslim minority from China’s western region of Xinjiang. Their forced removal sparked protests in Turkey against the Chinese embassy and the Thai consulate, as well as Chinese-owned businesses.

For those who escape to other countries only to be sent back, the punishments may be even more severe. Countries including Pakistan, Malaysia, Kazakhstan and Cambodia have also forcibly returned Uighurs to China, and rights groups say that some of them were never heard from again.

Thailand’s decision to deport 109 Uighurs prompted a warning from the UN's refugee agency, UNHCR, that they could face persecution and even torture after being sent back to China.

Yet the remaining detainees have chosen not to seek protection from abuses back home by applying for asylum, UNHCR has told IRIN.

Distrust of the UN is likely one reason for choosing not to apply, according to Ala Mentimin, vice president of the World Uighur Congress, a Washington D.C.-based advocacy group. While he has not been able to speak to those in detention in Thailand, he said they probably hold similar views as those he has interviewed in Malaysia and Turkey.

“They have no trust in the UNHCR, which has failed to stop deportations in the past,” he said.

Mentimin cited the 2009 deportation of 20 Uighurs from Cambodia where they had applied for asylum. Security personnel took them at gunpoint from a safe house and drove them to a military airport where they were put aboard an unscheduled charter flight to China.

A classified United States diplomatic cable sent from its embassy in Cambodia and made public by WikiLeaks suggests that UNHCR agreed that it did not do enough to protect the Uighurs.

The cable describes a meeting between US Chargé d’Affaires Theodore Allegra and other diplomats and UNHCR Regional Representative Raymond Hall.

“Hall confirmed that UNHCR had made no special accommodations for protection or processing of this group, despite the high visibility and Chinese pressure attendant to their cases, but acknowledged that with the ‘wisdom of hindsight’ the UNHCR might have handled the Uighur case differently,” the cable reads.

Nicholas Bequelin, East Asia director for Amnesty International, said another reason Uighurs who have escaped China may choose not to apply for asylum is because they are worried that personal information they provide to UNHCR could find its way back to Chinese authorities.

One more reason for refusing to register in Thailand as asylum seekers is that they are not interested in being resettled to a third country once obtaining refugee status, according to UNHCR.

“Turkey has traditionally taken them in,” said UNHCR spokesperson Vivian Tan. “They are only looking for ways to get to Turkey."

Uyghurs in Xinjiang Province look at posters put up by the Chinese government after the July 2009 protests. The posters show scenes associating Uyghurs with destruction from the protests, or cooperation between Uyghurs and Han Chinese 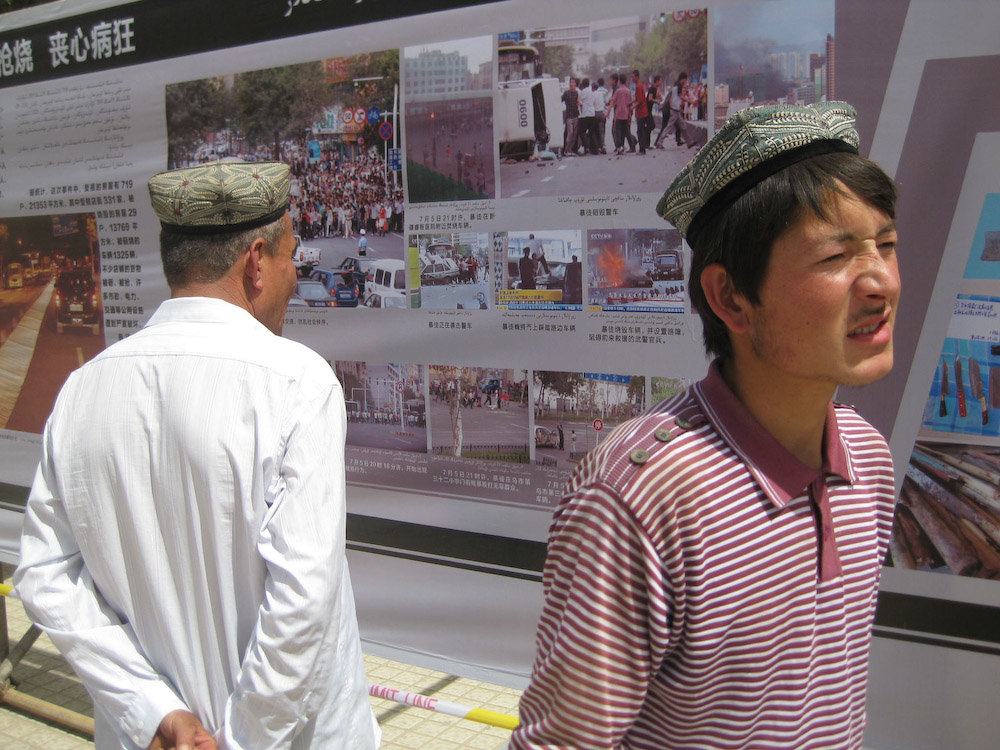 Caught in the great game

Uighurs who flee China often pay human smugglers between US $10,000 and $30,000, according to Mentimin of the World Uighur Congress.

Uighur sources told IRIN on condition of anonymity that those detained in Thailand had travelled overland through Vietnam and Cambodia using buses and private cars.

Uighurs fleeing China are almost always trying to get to Turkey where many have already settled and where the government has an open door policy. But if they are intercepted along the way, they find themselves caught in a geopolitical power struggle in which Beijing exerts pressure on countries to ignore their obligations under international law and forcibly return them.

Days after Cambodia deported 20 Uighurs in 2009, China’s then vice-president Xi Jinping visited the country and signed off on a package of grants, loans and infrastructure development deals worth more than US $1 billion.

“UNHCR Regional Representative Raymond Hall stated that although Cambodia had tried hard over the years to assume refugee responsibilities, it was unable to withstand direct pressure from China in its first major test,” according to the US diplomatic cable released by Wikileaks.

Likewise, rights advocates say that China exerted pressure and made backroom deals with Thailand’s military government, which took power in a May 2014 coup that was condemned by the US and other countries.

"It's quite clear that the military junta buckled under pressure from China to send the Uighurs back into harm's way, and by doing so further trashed Thailand's already diminished reputation as a rights respecting government,” said Phil Robertson, deputy Asia director for Human Rights Watch.

“The big question is what did Bangkok receive in return from Beijing for this clear betrayal of Thailand's international rights obligations under the Convention against Torture,” he told IRIN.

In the wake of the controversy, Thai authorities defended themselves, saying the government had not simply acceded to China’s request to return all 328 Uighurs who were being held in detentions centres throughout the country.

“China asked for all Uighur Muslims in Thailand to be sent back but we said we could not do it,” Colonel Weerachon Sukhondhapatipak, deputy Thai government spokesman, told reporters on 10 July.

He said authorities had determined that more than 170 Uighurs were Turkish citizens and allowed them to go to Turkey. Sukhondhapatipak said at the time that authorities were assessing the identities of those still in detention centres.

Those Uighurs remain in custody today, waiting for a decision that could send them into the welcoming arms of friends and family in Turkey, or into the black hole of China’s security apparatus.