Thousands of Afghans in Pakistan have been arrested or moved from their homes of many years in the wake of December’s killing of over 100 schoolchildren in the city of Peshawar. The Afghans, the majority of whom are not registered refugees, have been targeted in a government crackdown announced immediately after the killings.

Responsibility for the 16 December killings – in which militants charged into an army-run school and murdered at least 145 people, including 132 children – was claimed by the Pakistani militant group Tehrik-e-Taliban Pakistan. However the killers were foreign nationals – including at least two Afghans – and suspects have been arrested in Afghanistan, provoking anger against Afghan refugees in Pakistan.

After the deaths the Pakistani government announced a national action plan to expel illegal migrants – even if they are being forced back to war-torn Afghanistan.

Afghanistan’s ambassador in Pakistan Janan Mosazai told IRIN he was deeply concerned. “We are getting reports of harassment and forced expulsion of Afghan refugees in different parts of the country,” he said, stressing he was working with the Pakistani government to calm the situation.

Millions of Afghans fled to Pakistan in the 1980s after the Soviet invasion and during the rule of the Taliban in the late 1990s. While many have returned since 2001, there are around 1.7 million registered refugees in possession of Proof of Registration (PoR) cards – which are valid until December 2015 and are supposed to grant the holder protection against arbitrary detention and deportation under Pakistan’s Foreigners Act. There are also at least 1 million more Afghans living in the country unregistered and illegally.

The crackdown on illegal immigrants has taken place across the country but in the northern provinces of Khyber Pakhtunkhwa (KP) and Azad Jammu and Kashmir (AJK), there have also been cases of registered refugees being detained.

In the KP province, four days after the Peshawar killings the local government announced that all Afghans would be expelled from the province.

“If presidential elections can be held in Afghanistan, its citizens in Pakistan can also go back home,” Mushtaq Ahmed Ghani, the KP government’s minister for information, said.

In the ongoing operation, KP police arrested around 400 unregistered Afghans from January 28 to February 3, according to an official in the KP police department. Local district administrations have also asked the property owners to stop renting houses to Afghan refugees. “Afghans are basically involved in terrorist activities, drug peddling and other heinous crimes,” the police official said, speaking on condition on anonymity.

In the AJK region, Raja Azhar Iqbal, a local police officer, said that more than 500 families have voluntarily been moved out of different parts of the region. “It was not forced expulsion. It was operation to deport unlawful settlers, including Afghans, in order to ensure law and order situation in the region,” Iqbal said.

Afghan refugee children play at a makeshift camp near Karachi in Pakistan on February 1, 2015 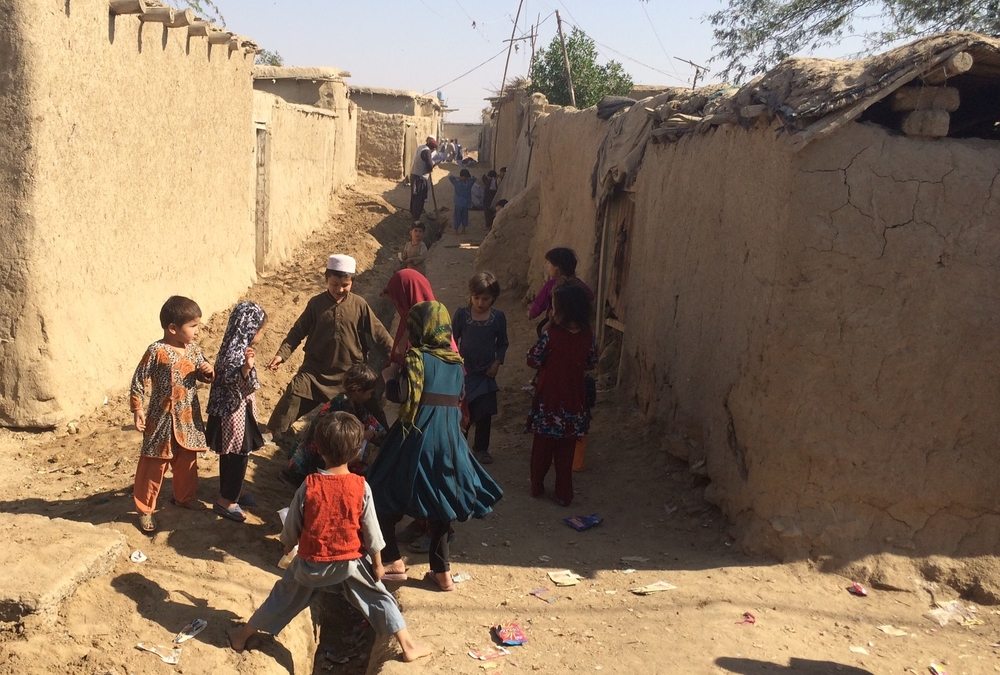 Afghans, both registered and unregistered, accuse security services of treating the whole community as criminals. Zareen Gul, 65, had been living in AJK since 1990 but finally moved back to Afghanistan last month after being harassed by police – despite being registered as a refugee. “The AJK’s local administration warned all Afghan refugees, even though the majority of them have the PoR cards, to leave the area,” Gul told IRIN by telephone from the war-torn eastern Afghan city of Jalalabad.

Hafiz Shahid, 25, a student whose parents migrated to the southern city of Karachi three decades ago, said: “I am born in Karachi and I have never visited my hometown in Afghanistan. How could I live there if Pakistani government forcibly expels me?”

The Pakistani government does, however, appear to be listening. After close discussion with UNHCR, the Ministry of States and Frontier Regions last week sent out a letter to all provincial Home departments declaring that arrests of registered refugees is not permitted. Khan said she is confident the situation will now improve, but stressed that UNHCR is monitoring closely and has alerted all partner organizations to intervene in cases of arbitrary arrest or detention.

“It should be borne in mind that refugees are themselves victims of war and terrorism in their own country – that is why they fled to seek refuge in Pakistan”, said Khan. “Refugees were innocent civilians, not militants, and 80 percent of the population are women and children”.

Despite the letter, Afghans across the country say they are increasingly fearful of arrest. At a makeshift Afghan refugee camp near the southern city of Karachi, 30-year-old Rashid Jan said that he stopped going to work for fear of detention. “We are daily wage workers, working mainly in [the] construction field. But because of police harassment, we are not going outside the camp.”

Khaista Gul, 55, an Afghan refugee living in Rawalpindi for three decades, said he was scared for his family. “Pakistan has been a haven for war-affected Afghans for decades, but now Pakistan itself is facing the same problems of terrorism and militancy that Afghanistan has been suffering. We want to go back but in our province in Afghanistan the insurgency is ongoing.”