Haiti has marked the fifth anniversary of the earthquake that left much of the country devastated and killed up to 300,000 people, with solemn ceremonies taking place in the capital Port-au-Prince and other cities.

That earthquake’s impact was so severe partly because, as Wikileaks cables revealed, the country was woefully unprepared for such an event.

The anniversary follows the similar marking of ten years since the 2004 Asian tsunami, which killed at least 200,000 people. Both disasters were among the deadliest in recent history.

The study by the insurance leaders Munich Re found that the number of natural catastrophes in 2014 was higher than average, with 980 events compared to a 10-year average of 830 (chart 1).

Yet the damage caused by those catastrophes was far lower than average, with 7,700 deaths in 2014 compared to a 10-year average of nearly 100,000 (chart 2). For insurance purposes, financial losses were also smaller – $31 billion, rather than an average of $58 billion.

A chart showing the number of natural catastrophes in 2014 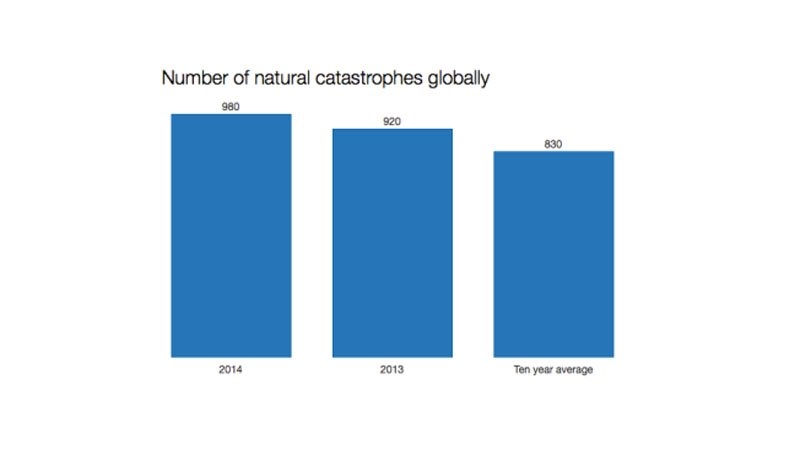 India and the Philippines are among the countries that have
improved their disaster preparedness, according to Ernst Rauch, head of
Munich Re’s Corporate Climate Center. In particular, he said, the two
countries have vastly improved warning systems to the public and are more clearly communicating technical information to the people.

However, Rauch cautioned that the lower number of deaths was not necessarily a trend that would continue.  2014 saw an unusually quiet hurricane season in North America, while larger catastrophes that occurred tended not to be in heavily populated areas. 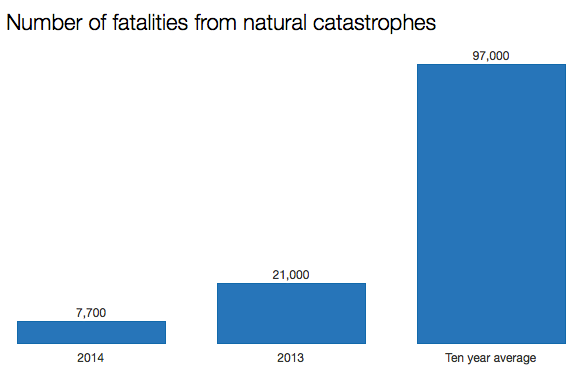 “We currently have in some countries a limited number of examples of positive impacts of public warning and evacuation measures. It is still too early to talk about a general trend. However, it is fair to highlight these examples and discuss them with relevant stakeholders on a broader scale,” he said.

Terry Cannon, research fellow at the Institute of Development Studies, said the figure was “purely random”. A more detailed breakdown of the data was needed to draw clearer conclusions, he added.