When Operation Lifeline Sudan (OLS) began 25 years ago, it sought to extend a helping hand to the millions in need and caught up in the second Sudanese civil war (1989-2005).

Today, the international community is grappling with a costly South Sudan crisis. In the past 10 months, thousands of people have died, many more have been injured. At least 1.4 million South Sudanese have fled their homes, with about 469,000 crossing into neighbouring Ethiopia, Kenya, Sudan and Uganda. A large-scale humanitarian operation is under way with the aid community seeking US$1.8 billion in 2014.

IRIN looks at lessons that can, or have already been, learned from the OLS experience.

OLS was the largest-ever coordinated humanitarian effort that “allowed the participation of donors and NGOs who were either unable or unwilling to mount relief efforts on their own or under other auspices”, notes a report by the Secure Livelihoods Research Consortium (SLRC).

According to the report, cooperation among NGOs was a “product of OLS in general and the ground rules negotiations in particular.”

Coordination remains critical in the aid response. The UN Office for the Coordination of Humanitarian Affairs (OCHA) is tasked with the responsibility “bringing together humanitarian actors to ensure a coherent response to emergencies”.

The OLS ground rules called for “humanitarian assistance to populations in need, regardless of affiliation,” said Dan Maxwell, a professor at Tufts University and the SLRC’s team leader. The UN and aid agencies would negotiate with the warring parties for access to deliver food and other relief. While OLS would come in for consistent criticism - from both the international community and the protagonists, OLS operated for about 16 years, ending in 2005 after the signing of the Comprehensive Peace Agreement (CPA).

Engage with all parties to tackle security and access constraints

As in the OLS period, logistical, political and security constraints are plaguing today’s relief effort in South Sudan.

Access by road has remained challenging during the rains, forcing aid agencies to rely heavily on increasingly expensive air assets. According to some aid workers, it was cheaper during OLS to use air assets, as relief items were flown from staging areas in neighbouring Ethiopia, Kenya and Uganda. At present, most aid is flown in from Juba, which is far from crisis-affected areas. Cross-border deliveries to South Sudan from Sudan have recently begun. 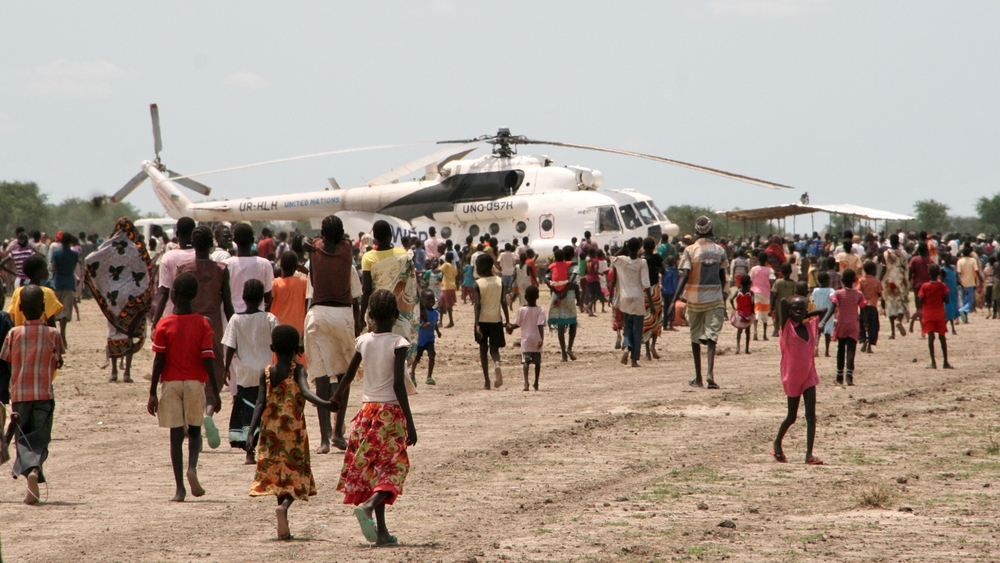 South Sudan ranks third in the world after Afghanistan and Syria in terms of insecurity for aid workers. According to OCHA, 74 access incidents were reported in September (compared to 58 in August) mainly involving “violence against personnel/assets with several incidents of assault, harassment and ambush/hijackings especially in Central Equatoria, and arrest/detention and threats in Unity and Jonglei”. In August, a UN helicopter was shot down in the outskirts of Bentiu, in Unity State.

In South Sudan, the Humanitarian Country Team - which comprises the UN, the International Organization for Migration, international NGOs and Red Cross/Red Crescent Movement representatives - “extensively engages with all parties to the conflict to inform [them] of the impact of access constraints on humanitarian programmes,” notes an OCHA access snapshot.

“OCHA’s access team - engages with all parties to the conflict to overcome constraints and facilitate access including assurances for flights and convoys,” it adds.

Negotiating with parties to the conflict enabled OLS to become the first relief effort in an active “non-international conflict”, which “expanded the realm of possibility surrounding emergency relief and humanitarian response,” notes the SLRC report.

Alongside the coordination capacity and official umbrella of OLS, negotiated access introduced “the concept of ‘humanitarian governance’, or the use of humanitarian aid and human rights principles to influence the behaviour of a state or of non-state actors,” it adds.

The SLRC report draws parallels with the OLS era, when assistance for SPLM-controlled areas was perceived by the government in Khartoum as support to the rebels. An independent evaluation from the UN Department of Humanitarian Affairs (DHA) acknowledged: “While OLS agreements recognize ultimate [government of Sudan] sovereignty, in practice, the Southern Sector has developed a tenuous autonomy in relation to the warring parties.” Indeed, OLS critics viewed negotiated access as “the programmatic expression of the acceptance of continuing violence”.

OLS activities were restricted by the parties to the conflict. People living in areas such as the Nuba Mountains - along what is now Sudan’s southern border - remained largely cut off from assistance.

There were few “alternative means for delivering aid”, according to SLRC’s Maxwell, who said that ignoring the process of negotiating access could have proven dangerous to aid workers and destabilized the entire operation.

A vital lesson from OLS, says the SLRC report, is to continue to engage with both sides in a conflict while respecting sovereignty.

Back in the 1980s negotiating access with conflict parties led to criticism that OLS was perpetuating the conflict - with the assistance provided to displaced people, in and from the south, viewed as providing less incentive for the southern factions to stop fighting.

OLS’s shift from only emergency relief to more of a development agenda in the southern sector post-1991 was viewed “as an attempt by Western governments to assist the SPLM/A in resisting the Khartoum government’s onslaught,” said the report.

In the current crisis, the Juba administration has expressed anti-UN sentiments amid misperceptions that the UN Mission in South Sudan (UNMISS) was supporting the rebels.

Make the most of local networks

OLS was criticized for “passing over opportunities to hire local staff” and for having failed to adequately consider Sudanese observers’ and beneficiaries’ views, according to the SLRC report.

Luka Biong, the director of the Center for Peace and Development Studies at the University of Juba, noted that then, “International NGOs were becoming de facto governments. They forgot the institutions that are out there.”

Biong added: “The idea that traditional institutions are broken during the war is not an ultimate conclusion.” For Biong, the lack of an exit strategy meant that when a crisis ended and agencies began to leave, there was no one left to carry on the work.

In recent years, more local staff have been recruited into international aid agencies. In an August op-ed, the humanitarian coordinator in South Sudan, Toby Lanzer, said: “Before the crisis [pre-December 2013], nine in 10 staff members with international NGOs in South Sudan were South Sudanese.”

The conflict has, however, affected the deployment of local staff from different ethnic backgrounds to some hotspots. “The ethnic tensions fuelling the violence meant that some South Sudanese aid workers were not able to work where they were most needed, as their lives were potentially in danger,” added Lanzer.

But local networks are crucial in the response. Kibrom Tesfaselassie, who leads UNICEF’s rapid response missions to some of South Sudan’s most isolated and insecure areas, told IRIN his team is only deployed after “community leaders connect with partners on the ground and request that there is a need.”

Despite this, resentment remains with the Juba administration recently rescinding a directive banning the hiring of some foreign workers to give more jobs to local staff.

While OLS was set up in a different context and can only offer limited guidance to navigating South Sudan’s current political framework, veterans of past humanitarian campaigns say lessons remain. John Ashworth, who has extensive experience in peace-building work in Sudan and South Sudan, but working through church groups rather than through OLS, said that flexibility, was crucial.

The OLS system was “very inflexible”, said Ashworth. “Things on the ground could change quite quickly. But trying to get that message back to a logistics department… they could actually be several weeks behind real time.”

According to the SLRC report, “the timing of food aid delivery was often delayed: hampered by logistical problems and poor infrastructure, as well as from bureaucratic, political, security and environmental constraints.”

While the current response is more nimble, a lack of resources is often a problem.

“You can do everything if you can pay for it,” said Tariq Riebl, Oxfam’s country director in South Sudan. The South Sudan Crisis Response Plan, which has received 70 percent of the $1.8 billion required, is facing competition from other ongoing international crises, including the Ebola outbreak in West Africa.

OLS was criticized as being unsustainable and that it “only responded to immediate needs and failed to address underlying causes of the crisis”, notes the SLRC report.

Despite attempts to encourage more local food production in the mid-1990s, “the massive food operation was often not tied to any sustainable improvements in people’s own livelihoods - and indeed [there was] controversy over whether it should be or not.”

While OLS did not set out to end hostilities between warring parties in Sudan, it had some peacebuilding dividends, which critics argue could have been pursued further. “There was a profound connection between OLS and opportunities for peace-making, even if peace was not its stated aim. The operation was mounted to ameliorate the suffering caused by war-induced famine; hence, the final solution to the problem lay in achieving peace,” notes an OLS review.

In the response to the current crisis, livelihood support is a key component alongside the provision of food, health care, shelter, sanitation and other basic needs. In April, Lanzer called on the parties to the conflict to consider a “month of tranquility” to enable people to move freely to farm or tend to livestock or “or even to seek asylum in neighbouring countries if they so wish”.

Before the current conflict, aid agencies in South Sudan were shifting towards development. Speaking during the launch of the 2013 Consolidated Appeal Process, Awut Deng Acuil, South Sudan’s then minister of humanitarian affairs and disaster management, said: “Placing resilience and national institutions at the forefront of aid work will help create a South Sudan which is better able to care for its citizens in times of crisis.” The conflict, however, stalled these plans.