Four and a half years after a landslide and subsequent flooding in northern Pakistan’s Gilgit-Baltistan State killed 19 people and displaced around 25,000, a solution to the plight of local residents seems as far off as ever.

The area that used to house a handful of bustling communities is a 22km-long pool of water dubbed Attabad Lake. Looking out from its banks, the shells of dozens of homes rise up from the blue-green waters.

In the aftermath of this disaster in the Hunza Valley, there were immediate commitments by the Pakistani authorities that they would drain the area and resettle the displaced families in new territory, but residents say nothing has happened, that compensation has been inadequate, and that the government is prioritizing the rebuilding of a nearby highway to China. Many of those who protested have been thrown in jail, with some awaiting trial in special anti-terrorism courts on charges of arson and sedition.

The warning signs of the landslide had been noticeable for several months before the day of the crash, said Sahib Jan, a programme officer with Focus Humanitarian Assistance (FOCUS), an international group of agencies affiliated with the Aga Khan Development Network. Three months before the slide, they realized a crisis was coming. “We literally dragged people out of their homes, telling them their lives were in danger,” recalled Jan.

In the end the slide was more devastating than anyone had feared. "We evacuated several other villages, up to 100km downstream, out of fear the earthen dam created by the landslide would burst,” Jan added.

Residents whose homes were destroyed remain in temporary camps such as Altit. Among them is Gulfam, who lost her house in the slide. She lives in the camp and also teaches there at a makeshift school. Conditions are dire. Small one-room huts 10 foot by 15 host up to three families - over 15 people. “There is no space here, and it gets stiflingly hot in the summer,” Gulfam said.

Yet even this meagre existence is insecure. While much of the funding for the camps comes from the UN Development Programme, the Aga Khan Fund and other development agencies, Altit is technically on privately owned land temporarily given to authorities to house internally displaced persons (IDPs). “The owners threaten us daily, saying we should have left by now,” Gulfam said.

Many of the IDPs accuse the Pakistani authorities of neglect.

“The original plan was to drain the lake and have villagers return to their homes. But this never happened,” said Jan. Authorities instead gave priority to reopening the Karakoram Highway (KKH) - the only land route between Pakistan and China to the north - which was blocked by the landslide.

Built by the Chinese and Pakistani militaries in the 1970s, the KKH is the world's highest paved roadway, and hundreds of trucks used it to travel across the Pakistan-China border every day, while it also provided a reliable route for the movement of troops and armaments. When the landslide hit, it formed a 2km-wide earthen dam across the Hunza river valley, blocking the KKH, while Attabad Lake also swamped parts of the road. As a result, trade has slowed to a trickle as trucks looking to cross the lake have to spend more than US$150 to have their cargo loaded onto boats and ferried to the other side. The Pakistani government has focused on the strategically important road at the expense, critics say, of the thousands of displaced.

Since a major landslide left thousands homeless in the north of Pakistan in 2010, they have lived in temporary accommodation 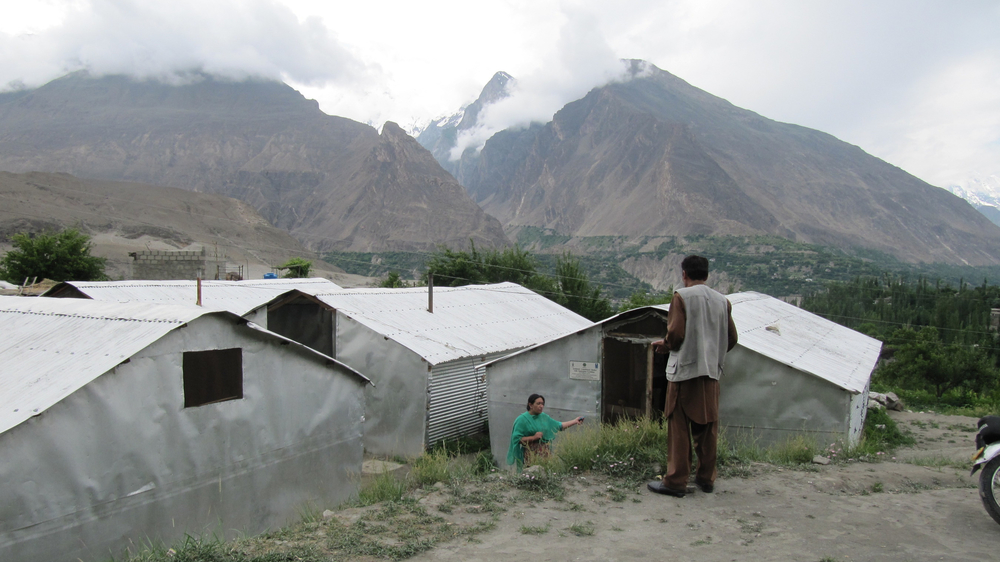 Brigadier (retired) Nasrullah Abeer, a consultant with the Frontier Works Organization (FWO), a military-civilian organization contracted by Pakistan to build and maintain KKH, told IRIN his engineers made a proposal immediately after the landslide to the Pakistani government to drain the entire Attabad Lake and rebuild the highway along its original route, but their bid was set aside, and the China Road and Bridge Corporation (CRBC), a state-owned Chinese company, was instead contracted to realign the highway.

FWO were in the end asked to implement some of the much scaled-back project. “Our task was [just] to lower the lake enough to allow construction of an alternate roadway, and reduce the risk of downstream floods,” Abeer explained. Along with reopening the Pakistan-China trade route, lowering the lake's water level was meant to reduce the risk of a potentially catastrophic flood downriver if the earthen dam were to burst.

Working in temperatures that can fall below minus 15 C, FWO blasted a channel into the earthen dam, forming a spillway that has reduced the lake's water level by more than 30 metres. This has allowed CRBC engineers to access the cliffside along the valley, where hundreds of workers are constructing a series of tunnels and bridges, more than 22km long, to bypass the lake and reconnect the KKH.

For the residents of Attabad and other destroyed villages, the government’s decision to go around the lake amounts to an abandoning of their homeland. In total just 5sqkm of land, a tiny fraction of what the IDPs once lived on, has been recovered.

The government has offered compensation of 600,000 rupees ($6,000) to each displaced family. Yet this farming community has lost their livelihoods. “With no other incomes, we have long gone through that [the $6,000],” said Gulfam.

Zaheeruddin Babar of the Gilgit-Baltistan Disaster Management Authority agreed the compensation had not been sufficient. “[After the flood] 90 percent of the land in Hunza is not liveable, and only 4 percent is cultivatable, so the [loss of the] land is worth a lot more [in compensation] than the 600,000 rupees [$6,000] given to families.”

Each Pakistani government since the slide - including the current one led by Prime Minister Nawaz Sharif - has also promised to rehouse the homeless but so far there have been no substantive moves.

Worse still for residents, the government has looked to quell their anger - sometimes violently. Ownership of Gilgit-Baltistan is, along with two neighbouring states of Jammu and Kashmir, disputed between Pakistan and India - with Pakistan being granted stewardship of Gilgit-Baltistan (called the Northern Areas before 2009) until a vote is held on the dispute to determine the future of the territory.

The village of Attabad was among a number destroyed in 2010 by a landslide that left behind the 21-kilometer Attabad Lake. Four years later the IDPs are still awaiting rehousing. 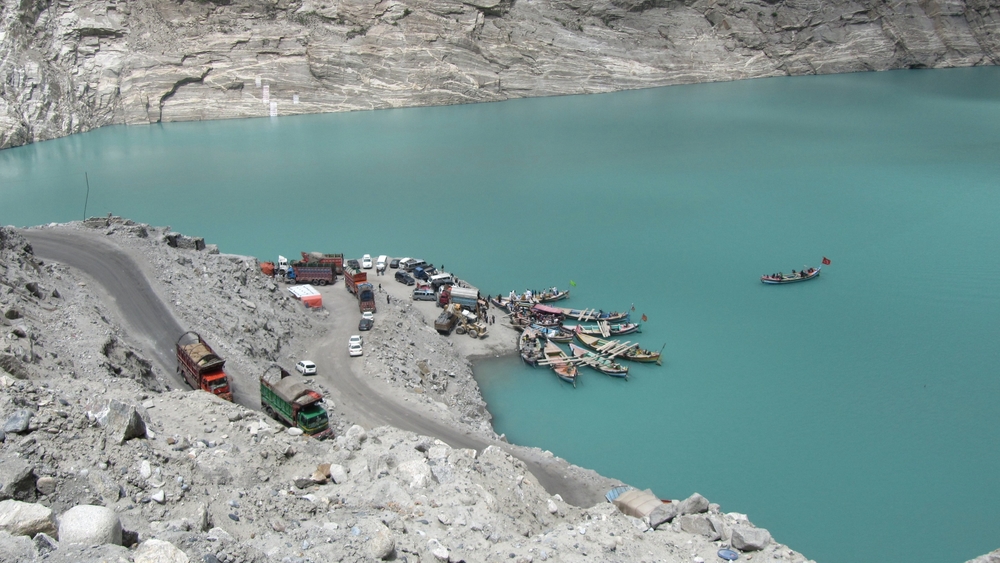 The disputed nature of the territory means Pakistan's constitution is not applied there. For the IDPs this means that crucial rights, such as the ability to appeal Pakistani Supreme Court rulings, are not available for local residents.

With legal channels impossible, the residents have taken to protesting. In August 2011, a year after the government announced the relief package, a few dozen families had still not received any funds, and hundreds of others had not received the full compensation. Hundreds of IDPs held a sit-in in front of the district headquarters in Aliabad, demanding quicker distribution of funds and the draining of the lake. The protest blocked the route of visiting Prime Minister Yusuf Raza Gilani. Police attempting to clear the protesters fired tear gas to disperse the protesters, eventually resorting, witnesses say, to live fire, killing two men.

“[Live] fire is supposed to be the last resort,” Iftikhar Hussain, a 34-year-old protester, told IRIN. “It was a peaceful protest, and people only reacted after the police started firing.”

The killing sparked violent riots which spread throughout the province, and protesters burned down dozens of government buildings - police stations, district offices, jails - across Giglit-Baltistan. Authorities responded by imposing a rarely-used provision in Pakistani law that affords emergency powers to police, and more than 100 protesters, mostly IDPs but also some activists, were arrested, and many charged with crimes including terrorism and sedition, which could carry the death penalty.

Hussain is one of 36 men still on remand for the protests, awaiting a verdict. He says he and two other activists were physically tortured during the first month of their confinement. Gilgit-Baltistan police have denied the accusations of torture.

Today in the Attabad area, the sense of despair is overwhelming. Few believe they will ever get their homeland back and there is little hope of resettlement in the near future. Displaced residents of the Hunza Valley feel man-made decisions are as much to blame for their sorry state as nature’s fury.