With dozens killed in Israeli air raids on Gaza and UN Secretary-General Ban Ki-moon warning that the situation is “on a knife-edge”, relations between Palestinians and Israelis are disintegrating.

Some Palestinian workers say they have been summarily dismissed, while an atmosphere of hatred and fear is preventing many from going to work, taking public transport or even leaving their homes.

Recently Sami, a Palestinian from East Jerusalem in his mid-20s, received a call from the Jewish-run shop in West Jerusalem where he has worked for several years.

“They… said don’t come in because you are an Arab. I haven't worked in two weeks," said Sami, who lives with his parents, several of his nine siblings and his two young daughters in a crowded flat. Likewise, 16-year-old Mohammad said the restaurant where he works in Tel Aviv told him his help was no longer needed.

Since the kidnapping of three Israeli teenagers several weeks ago, relations between Arabs and Israelis in the city have become increasingly fractious. The teens were last week found dead near the West Bank town of Hebron; sparking so-called revenge attacks by far-right Jewish settlers. In the subsequent days 16-year-old Palestinian Mohammed Abu Khdeir was attacked and killed - believed to have been burned alive. And in a related turn of events, on 8 July, the Israeli government began bombing hundreds of targets in the eastern enclave of Gaza after militants fired rockets across the border.

Given what has happened in the last two or three weeks, I would expect the West Bank to get hotter and hotter.

Anger has increased on both sides, with Jewish mobs attacking Arab communities and Palestinians protesting and sometimes carrying out attacks as well. In Jerusalem, groups of Israelis chanting “death to Arabs” have tried to enter Palestinian neighbourhoods while across the city, stickers have been put up imploring the Israeli government: “Enough talking, we want revenge.”

Sami, switching between Arabic and nearly fluent Hebrew, pointed out that he has many Israeli friends who have called to see how he is doing, but that his family and other Palestinians are living in fear of an attack by far-right groups.

"Arabs don't go to the centre of the city any more, since all of this started," he said, while smoking and checking his phone for news updates or calls for help from his friends. His screen was a stream of photos of the slain Khdeir and videos of the latest news. "We don’t let our kids out of the house, even though it’s Ramadan," he said.

Yezid Sayigh, senior associate at the Carnegie Middle East Center, says the situation is more volatile than it has been for several years. “There has been a very polarized climate in Jerusalem and the West Bank,” he said, adding: “Given what has happened in the last two or three weeks, I would expect the West Bank to get hotter and hotter.”

The numbers of people who have been fired from their jobs is difficult to judge - with information and disinformation making the rounds on social media. A widely circulated document claims a major supermarket chain dismissed all its Palestinian employees. Rami Levy, the chain’s owner and namesake, categorically denied the document’s veracity. “We employ people without discrimination by nationality. Anyone who says otherwise is a liar. It is simply not true,” he told IRIN.

Ala Khatib, the executive director of Kav LaOved (Workers’ Hotline), an organization that protects the rights of disadvantaged workers in Israel, said he had not yet dealt directly with any workers fired because of nationality but that it was a major concern. The group released a statement on 7 July condemning any such act: “The level of hatred is… evident in the Israeli labour market, and we have witnessed media reportings [sic] of Arab workers from the West Bank and Israel being persecuted and attacked, sometimes by an angry mob based solely on their ethnicity, as well as a call to action to ‘at least’ dismiss Arab workers from their jobs.”

In Gaza, where at least 66 people have been killed in three days of bombings, those that had work have seen it disappear.

Issa, a 33-year-old father of three, works as a teacher in a local school. He has not been paid for several months as the Hamas-led government’s finances collapse following the overthrow of its Muslim Brotherhood-led government in Egypt, which supported the Islamist party. With the latest attacks his family is on lockdown and work has stopped.

“Israeli attacks are not new to us in Gaza, but there are always fears of worse to come for our families and relatives, and for Gaza in general,” Issa said. “We break fast on bombing here and there, and start fasting at dawn with bombing here and there. How things can end this time God only knows.”

In the Israeli community, too, fear is heightened. In between tears, Ayelet, a young mother from the town of Omer, near the border with the West Bank, talks of how she is petrified her two young children could be hurt. On the weekend, a group of Palestinians protested only minutes from her home.

“[They] covered their faces and were tossing [Molotov cocktails] at cars going into the neighbourhood,” she said, adding that she may look to move. “I have had enough. There is no safety in Omer; there never was. Every time [the Palestinians] think they have been wronged, they protest violently… Why is the government not doing anything?”

Israeli Police spokesman Mickey Rosenfeld said extra units have been mobilized in Jerusalem to prevent and respond to “the disturbances and the general security situation including the possibility of [conflicts] between Jews and Arabs”.

On 5 July, Munzer Nashishibi, 50, witnessed three young men surround his 20-year-old neighbor and spray gas in his face. Nashishibi's small house in the Sheikh Jarrah neighborhood, along the border between the predominantly Palestinian East Jerusalem and 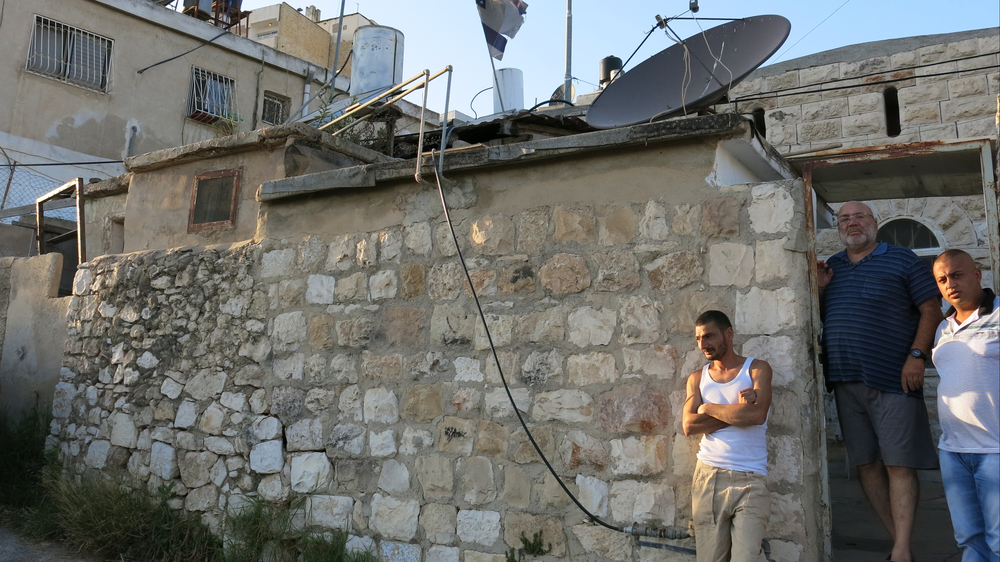 “The Israeli police have dealt with disturbances that have been taking place since the beginning of Ramadan [on 29 June] and the funeral [of Abu Khdeir]. There have been disturbances in different Arab neighbourhoods… by hundreds of masked Palestinians, and the Israel Police have to deal with those, as tensions are high.”

Warming up or drawing to a close?

What comes next is far from clear. Daniel Levy, head of the Middle East and North Africa Programme at the European Council for Foreign Relations and a former adviser to the Israeli government, says that while he hopes the violence will subside in the coming days, the fractious situation makes reliable predictions challenging.

“We are still in an escalatory cycle rather than the reverse… It could increase significantly but I think we are talking days, rather than weeks [before it calms]. What worries me is that while you are in a period of intense tension, if there is something significant like [the killing of Abu Khdeir or the Israeli teens], it could escalate fast.”

Carnegie’s Sayegh added that during the last Israeli airstrikes against Gaza in 2012, the Israeli-occupied West Bank and East Jerusalem remained quiet, but that this crisis had seen the Israeli forces stretched between the two. “There is a climate of confrontation at a time when there is a lot of frustration among Palestinians as the peace process has completely stalled.”

Yet Levy added that while both the Israeli government and the Palestinian leadership had been talking tough, with Israeli Prime Minister Benjamin Netanyahu telling the military to intensify its assault on Gaza, neither side was really prepared for a prolonged conflict. “I don’t think either side have a long-term plan for how an on-going confrontation works out well for them,” he said.

Either way, while there are many who refuse to bow to the extremism on both sides of the divide, the current troubles are eroding even the basic tenets of coexistence, however fragile, that existed. For some in East Jerusalem, where watchful soldiers stood across the street from vigilant residents in a nighttime standoff, something has forever changed.

Ehab Nashibi', who lives in the area, saw his teenage daughter caught up in clashes with the army, and now he stays at home guarding his family.

“I can't go anywhere, I have no sense of security at home... the [settlers] used to cause a bit of problems for us. They would throw stuff at us, now they walk by my house swearing at us,” he said. “All my life, I never had anything against Jews, and I taught my kids the same. Honestly, now I’m changing my thoughts.”