Read about what we achieved.
CAIRO

As the number of Syrians in Egypt rises, refugees say it has become increasingly difficult to find places for their children in already overstretched government schools.

In addition, refugees, asylum seekers and migrants in Egypt complain of unaffordable school costs in private and public schools, bureaucratic enrolment procedures, and a growing atmosphere of suspicion, xenophobia and discrimination in the classroom.

The UN Refugee Agency (UNHCR) had 179,762 refugees and asylum seekers registered as of the end of 2013, most of them Syrian and Sudanese.

But according to a report by Egypt’s largest refugee-focused NGO Tadamon, the real numbers could be anywhere between 1.5 and 3 million, based on estimates from local NGOs, some of whom include economic migrants in their definition of refugees. Tadamon blames “differing legal definitions” and “a failure or refusal of many refugees to register” for the numbers confusion.

The right to an education is enshrined in the 1951 Convention on the Status of Refugees, of which Egypt is a signatory. However, in 1981 Egypt put forward reservations to several articles, resulting in diminished refugee rights.

Instead of a free education, refugee families need to apply for tuition grants from Catholic Relief Services, an NGO partner of UNHCR and a member of Caritas Internationalis.

According to UNHCR, registered Syrian refugee families with school-going children receive an education grant to assist them in covering the costs of school fees, uniforms, books, stationary and transport. As of mid-February 2014, some 32,000 children had received education grants.

According to Mohamed El Miligy, an Egyptian-Sudanese activist and communications officer for Tadamon, there is a conspicuously tortuous enrolment process set up to deter refugees from entering into an already overstretched education sector. “The [amount of] paperwork means that many will not be able to start [school] for a year or two.”

UNHCR’s Egypt branch told IRIN it was difficult for refugees to enrol in public school if they lacked previous educational documentation.

Despite UNHCR’s advocacy for Sudanese and Syrian refugees to have access to education facilities and services, Miligy says that in reality there are a growing number of cases where the “pretence of acceptance” is removed altogether and the school doors are simply shut on refugees attempting to enrol their children.

“There are many schools that will simply not let refugees in,” said Miligy. “You won’t find an order from the government saying ‘Don’t let refugees into schools’ but you will see it when you go to a school and try to apply there. The doors won’t be open for them.”

The Ministry of Education did not respond to multiple requests for an interview.

Hanadi Mohamed, a Sudanese refugee, says her children also encounter discrimination in Egyptian public schools. Refugees say the general atmosphere towards them has deteriorated as a result of Egypt’s political upheaval and flailing economy.

“I took my youngest to kindergarten here and when I came back I found the other children calling him names and physically beating him because he was Sudanese. He was crying. I asked the teacher whether she could do something but she didn’t help at all.”

Mohamed ended up having to remove her child from the school. Several parents told IRIN they had little choice but to do the same out of fear of bullying.

Tadamon runs separate refugee schools, under its “Alternative School Initiative” specifically geared to refugees who have no viable access to an education. Tucked away behind unmarked doors of unfinished apartment buildings, the schools often welcome children who have already been subjected to harassment and discrimination from their previous schooling environment.

A Sudanese refugee teaches others some basic English at a "refugee school" run by Egyptian NGO Tadamon in Cairo. 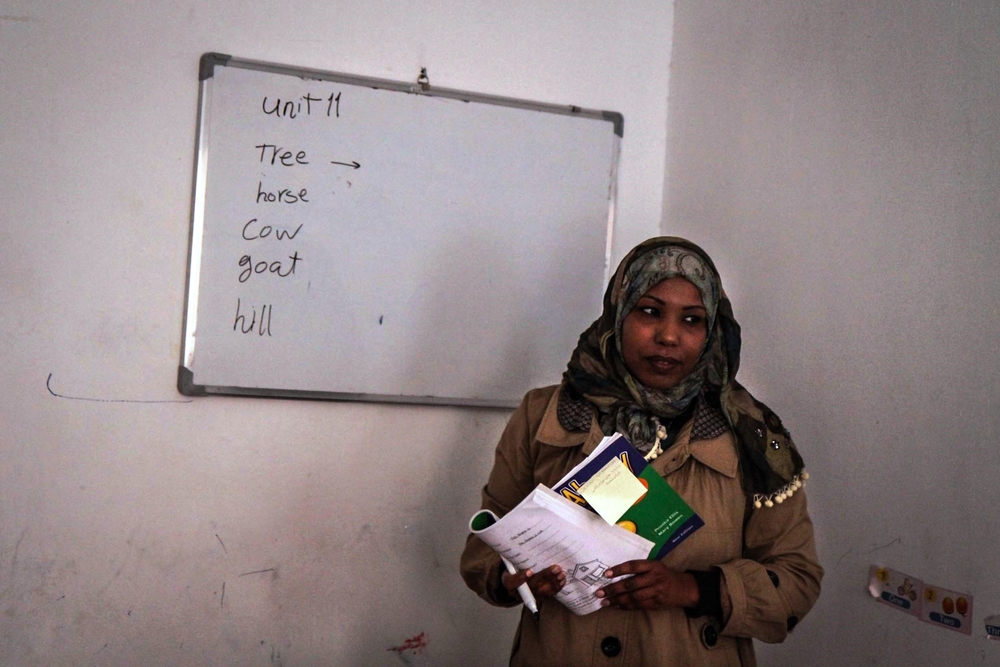 “Their psychology is affected; they get so down. So the families take them out of the school and take them to us where we can try and deal with them,” Miligy said. “Some of the children become violent as a result, while others are very withdrawn and hardly speak.”

Six months of research into the state of refugee education in Egypt by the UK-based Refugee Youth Project, published in a report at the end of 2013, found over 80 percent of the 400 refugee interviewees cited high school costs and a lack of money as the main reason they could not afford to send their children to school.

Magdy Garas, co-director of Caritas Egypt - a charity that provides financial aid, social support and medical care to refugees in Egypt - estimates there are around 17,000 Syrian families who are in financial need yet receive no support from either UNHCR or Caritas.

According to a government estimate from June 2013, there are 300,000 Syrian refugees in Egypt. As of 8 March, 134,917 Syrians had registered with UNHCR as refugees.