Women are the biggest victims in natural disasters and conflicts, yet they are also the most resourceful. Thus, aid agencies should do more to develop women as agents for change and development.

This is the takeaway message from this year’s Dubai International Humanitarian Aid & Development Conference & Exhibition (DIHAD), where hundreds of delegates from UN agencies, NGOs, donor agencies, regional organizations and Red Cross and Red Crescent societies gathered on 25-27 March to discuss women and aid.

The importance of giving women real decision-making power and leadership roles was also highlighted, as well as the need to support gender equality policies with adequate funding that would enable delivery rather than just paper commitments.

“It is women who most often bear the crippling consequences [of crises] - be they physical, psychological, social or economic,” Ertharin Cousin, executive director of the World Food Programme (WFP), told delegates.

The widespread use of rape as a weapon of war is just one indication that women are often targeted in conflicts.

In natural disasters, too, women and children are 14 times more likely to die than men, according to academic research. Oxfam reported that the 2004 Asian Ocean Tsunami may have killed four times as many women as men.

This is often linked to the pre-existing vulnerability of women in many societies and women’s tendencies to care for children and the elderly.

“It is time to break the silence that hurts forgotten women in forgotten places,” Cousin said. “We can do this by actively listening to women’s voices, and recognizing their challenges, by paying attention to their capacities as well as their needs.”

Women’s specific needs in crisis range from protection from sexual abuse to support in playing new roles as heads of households.

“Women have different and unique needs and sometimes a markedly different perspective on how to go about meeting those needs,” said HE Sheikha Lubna Bint Khalid Al Qasimi, United Arab Emirates minister of international cooperation and development.

Bint Khalid Al Qasimi was the first woman to become a government minister in the UAE. Instead of seeing women only as victims or recipients of assistance, she said, “we need to look beyond that and see them as agents of change, as brokers of peace and as deliverers of assistance.”

Maria Teresa Garrido, adviser for women and war at the International Committee of the Red Cross (ICRC), also cautioned against simple gender stereotyping.

“Women are associated with peace, tenderness… and men with war, to aggressiveness, to violence… but this is only a partial picture,” she said.

“These misperceptions really limit the way we express ourselves to men and women, the way we perceive them, and the way we work with them. Women are not only victims… they are also agents of reconstructing, of going ahead and finding answers to their situations.”

In fact, according to Claire Melamed, head of the Growth, Poverty and Inequality Programme at the Overseas Development Institute, women often have better survival strategies than men. In a January blog post, she described the argument that “women are always the most helpless victims in a disaster” as a myth.

There are various reasons women’s needs and voices are often overlooked. Some aid organizations see themselves as “too busy” in an emergency situation to address women’s specific needs. Some argue gender is a longer-term development issue. Others say women-specific organizations are already mandated to deal with gender issues. Cousin also noted that much of the aid industry is driven by men.

But panelists argued gender is not just a question of equity: It is about increasing the chances of women and girls’ survival in moments of crisis. As such, Cousin argues: “Gender is everyone’s business.”

Several panelists focused on the role of women in tackling food insecurity, noting their important position as lead care-givers and, in many conflict scenarios, heads of households.

“Women are key to food security because their influence on the household livelihood is huge,” explained Mona Chaya, the Food and Agricultural Organization (FAO)’s deputy strategic objective coordinator for resilience.

Giving an example of a FAO-backed project in Chad, where women had been given resources to improve agricultural yield, Chaya insisted: “Gender is not a standalone issue. Rather it is an integral part of development work... It’s a tool for agricultural development and food and nutrition security in peace as well as in disasters.”

“There is still a long way to go to ensure that humanitarian responses fully reflect the capacities, resources and needs of women.”

The humanitarian aid arm of the European Commission, ECHO, has recently adopted a new three-pillar policy on gender in humanitarian interventions, which includes mainstreaming gender awareness into all programming, targeted actions for women and capacity-building.

In practical terms, this includes everything from planning how to install lighting in refugee camps to cash transfers specifically targeted at women, as well as ways to build capacity among partners on gender issues and among women, so that they can better help themselves.

A young girl carries water from a river known to be infested with flies that cause river blindness. Ungwaku 1, Kajura District, in Kaduna State Nigeria 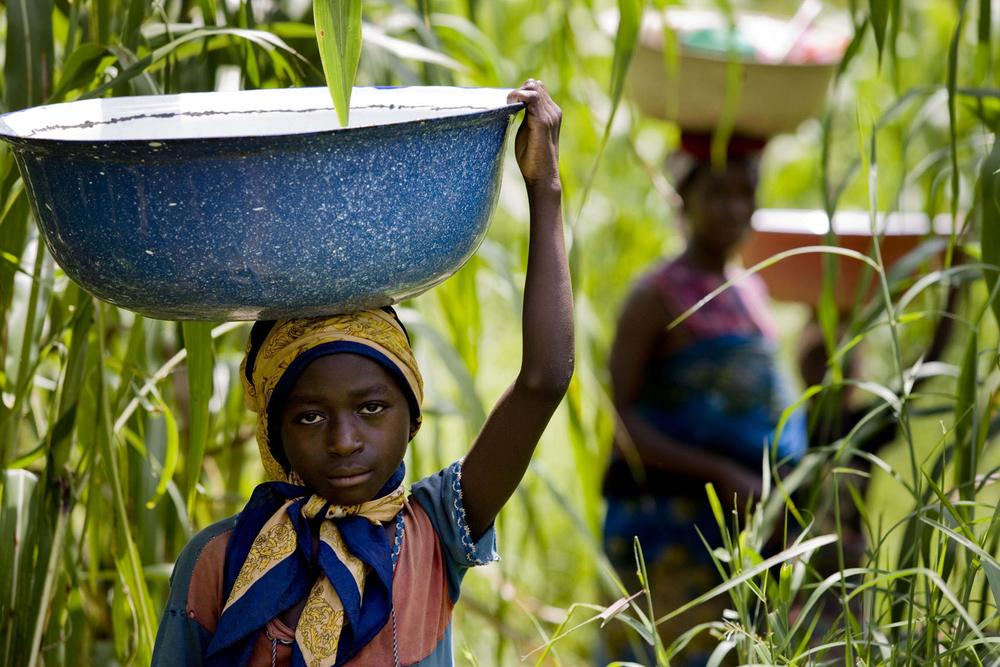 The International Organization for Migration (IOM), for example, has trained women in rural areas so that they can then create local disaster risk reduction mechanisms tailored to their own communities.

The UK Department for International Development is also introducing a requirement that all its development and humanitarian interventions - from drafting through to evaluation and monitoring - consider gender equality.

Others are also taking steps to mainstream gender programming. The Inter-Agency Standing Committee (IASC) Gender Marker, first piloted in 2009, is a tool that codes on a scale whether or not a humanitarian project is designed well enough to ensure both genders benefit equally from it.

Georgieva added that it was important to “lead by example” and she said: “We need to see more and more women in the field… not only talking the talk but also walking the walk.”

Panelists stressed the importance of female staff at all levels of organizations, from the leadership down to the enumerators doing questionnaires with affected people.

A special effort must also be made to ensure the full participation of women in planning humanitarian responses, panelists said, as women often know best what their communities need.

“I don’t think we can afford to leave women out of decision making, learning, designing, budgeting - any of those steps,” said Farah Kabir, the executive director of ActionAid in Bangladesh, “because if we do, we are missing out on 50 percent of the perspective, 50 percent of the ideas, and we are not coming up necessarily with the practical solutions.”

This, however, must be done with care and with the simultaneous involvement of men. Otherwise, as Wendy Fenton, coordinator of ODI’s Humanitarian Practice Network pointed out, giving women power in the distribution of aid could actually increase violence against them.

“Everyone is talking about women’s empowerment, about gender markers, about helping women,” said Muna Abu Suliman, the founding secretary-general of Saudi Arabia’s Alwaleed Bin Talal Foundation, and now a Goodwill Ambassador for the UN Development Programme.

“…In recent years there has been an increase in attention given to women and girls as agents of change and there are the commitments on gender equality. But the attention has not translated to funding for women’s organizations and actual wide-scale change.”

Funding is often fragmented and given in small sums, she said. Many organizations struggle to survive due to the short-term nature of their funding and even established women’s organizations with innovative models are unable to scale up their activities. Studies have also highlighted the need for more adaptable funding in complex emergencies, providing the flexibility to meet women’s needs.

But Mukesh Kapila, a professor at the University of Manchester’s Humanitarian and Conflict Response Institute, was quick to warn that funding for women’s programming and women in leadership positions would not be enough so long as the societal structures that propagate women’s vulnerability remain unchanged.

In one effort to address this, IOM has trained police to be better able to stop human trafficking of women.

Still, “despite the greater attention that we have given to gender over the past 15 years, there is still a long way to go to ensure that humanitarian responses fully reflect the capacities, resources and needs of women,” Cousin said.