Up to 130,000 refugees have fled from the Central African Republic (CAR) to Cameroon, many of them wounded from attacks, dehydrated or traumatized, say local officials and aid workers, who are struggling to cope with the speed of the influx.

In just two weeks of February, more than 20,000 CAR refugees entered Cameroon. Overall, one in five residents of CAR is displaced, either internally or in neighbouring countries.

Very few aid agencies are present to respond to the needs of the displaced, and many of the arrivals have not received any shelter materials, non-food items, food or other help.

Yann Lelevrier, West Africa Operational Representative with Médecins sans Frontières (MSF), told IRIN the problem comes down to a lack of preparation on the part of aid agencies in Cameroon, and a late - and slow - response on the ground. "UNHCR, [the UN refugee agency] which should be taking charge, took time to mobilize its resources and coordinate the response. In any case there is a lack of implementing partners,” he told IRIN. As a result MSF has been forced to cover more activities than expected and partly take care of displaced people's needs in two camps and some surrounding settlements.

Some 30,000 refugees and returnees are estimated to have fled to East Region, where they are staying in the border towns of Garoua-Boulai, Kenzou and Yokadouma, living in squalid conditions, sleeping under trees, trucks and tents - some provided by the UN Refugee Agency (UNHCR), some cobbled together by refugees. Others have been taken into people’s homes - some of them relatives, some not.

“Garoua-Boulai is overstrained by the different groups of refugees, and the situation is getting out of hand,” said the town’s mayor, Esther Yaffo Ndoe. “The refugees outweigh the capacity of UNHCR, the Red Cross and MSF, and the only government hospital is overwhelmed with patients,” she told IRIN.

Almost all - 90 percent, UNHCR estimates - are Muslims fleeing attacks by anti-balaka groups that continue to terrorize Muslim communities in CAR. The anti-balaka, whose name translates roughly as “machete-proof”, are militias opposing the mostly Muslim ex-Seleka, former fighters of the Seleka alliance that seized power in March 2013.

UNHCR and the Cameroon Red Cross (CRC) are registering refugees for transfer to a camp in Mborguéne, 50km from Garoua-Bulai, but the site is more or less devoid of basic services. There are just two wells and one school, which is not functional. The nearest health clinic is 27km from the camp. Getting it up to scratch will require a lot of work.

The World Food Programme (WFP) has started providing food to 27,000 refugees who are living in camps that have been set up in Mborguéne and Lolo. The organization is also supporting government health clinics to treat malnourished children. WFP spokesperson, Fabienne Pompey, recognizing more help is needed, particularly for those refugees not living in camps, said WFP will expand its response to provide food to 70,000 refugees between June and December 2014.

In Garoua-Boulai, men and women recount similar stories of family members being killed by anti-balaka militias. John Irwin, head of MSF in Cameroon, said: “Their lives have been totally transformed or destroyed by what is happening in CAR, and they are traumatized.”

Sali Abubakar, 35, a native from Yaluka Village in CAR, arrived in Garoua-Boulai on 19 February in a container truck. “My son Shadu and my brother were killed by anti-balaka in Yaluka. I ran away with my two wives and 10 children,” he told IRIN.

“I lost my father, all of my belongings and my shop when anti-balaka came, beating people and looting all houses. And while escaping, on the road, we were stopped by more men, and all our remaining money was taken from us,” 35-year-old Shaibu, also a father of 10, told IRIN.

“My husband died during a fight when he tried to stop anti-balaka militia from sending us out of the house. Two men stabbed him with knives in his chest, and I ran away with my children,” Fadimatu, 23, told IRIN.

Hawa, 70, says her granddaughter was raped by two men in the village of Barou. Since then, she has been listless. “We have been here for one week, but she has been sleeping every day,” Hawa told IRIN in tears.

Mamadu Abu, 13, told IRIN, “I came here with Papa and Mama and my sisters. We sleep in a tent built by Papa.” Mamadu said that when he is hungry, he begs for food in the village and brings what he can to his parents and sisters.

UNHCR and the CRC are distributing food to families, but there is not enough to go around, refugees told IRIN.

“We don’t have enough food to eat and no money. We have been given tents, mats and food, but it is not enough for everybody,” Shaibu told IRIN.

Muhamadu Hasim, director of the Garoua-Boulai District Hospital, which has received over 150 refugees daily since January, told IRIN many arrived with injuries from clashes with anti-balaka militia. Most are exhausted. “Many don’t eat well, they lack sleep and do not have enough rest,” he told IRIN.

“We have been addressing cases of malnutrition, respiratory problems, diarrhoea, gastrointestinal problems, vomiting and malaria. I have operated upon patients with gun and machete wounds and women with complicated pregnancies,” Hasim told IRIN.

Refugees who have fled Central African Republic in Jan, Feb and March 2014 and are staying in one of the temporary camps in Garoua-Boulai, in Cameroon's East Region. 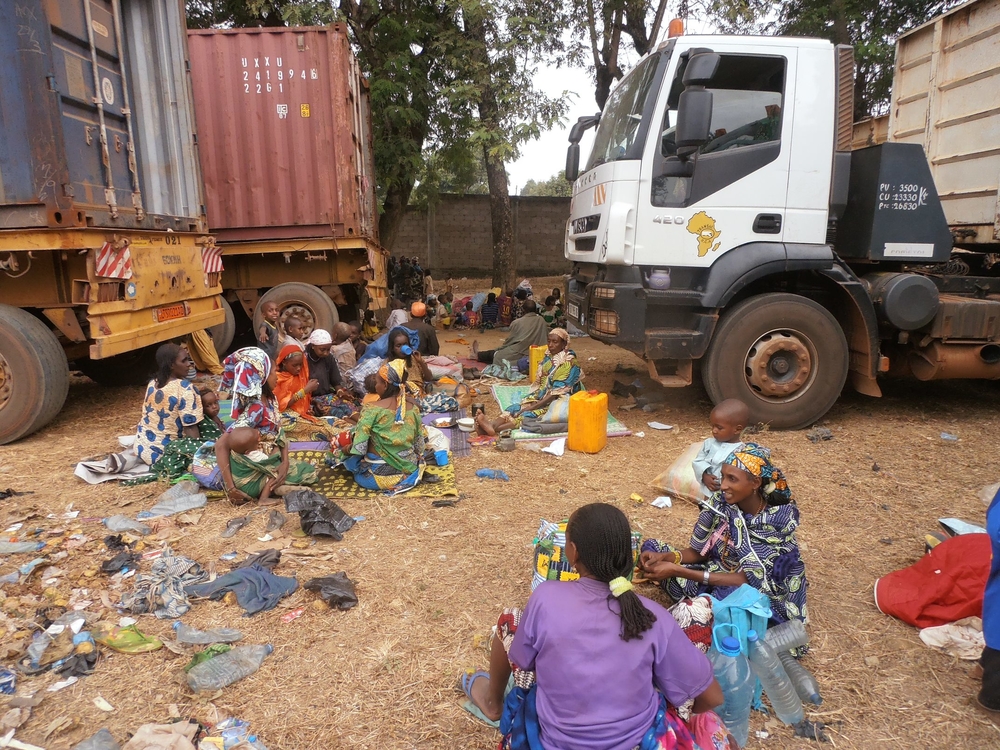 Cholera and meningitis are dangers to watch out for, said Dereje Terefe of the International Medical Corps. “Refugees and locals are currently in a dry, dusty environment, with high population density and harsh climate conditions,” he said, stressing that Cameroon and CAR both lie in the African meningitis belt.

MSF is helping the local health district by running mobile clinics that offer emergency medical help in towns and villages along the border. They treat about 70 people a day.

The district hospital has just seven nurses, and Hasim is the only doctor.

“We have very little capacity to address the growing health problems in this community… In February alone, we received 3,600 patients. The aid agencies come in, but they are always not timely, and their structures are just temporary,” said Hasim.

Forces from France and the African-led International Support Mission to the Central African Republic (MISCA) are stationed at the border with Cameroon to prevent militia attacks, including those on groups trying to flee.

They have also secured the road from CAR capital Bangui to Cameroon, which some say, will encourage more refugee movements in weeks to come.

A lieutenant with the French Army in CAR said, “Security is improving, but movement around the country is still dangerous.”

“The MISCA forces see anti-balaka stopping vehicles and abusing people, but they don’t do anything. Our vehicle was escorted by MISCA and white armies, but it was still stopped and money taken from us all,” said a refugee in Garoua-Boulai.

Cameroon security officials are worried about the uncontrolled flow of people from CAR. Ngotta Koeke, commander of Cameroon’s 123rd Infantry Mobile Company in Garoua-Boulai, said identifying and registering refugees for handover to UNHCR “remains a big challenge to the authorities.”

“We are searching every truck and all people who cross the border to ensure that fire arms are not infiltrated into Cameroon. But this is not easy because there is no clear line of border distinction between Cameroon and CAR,” he told IRIN.

Many of the refugees coming into Cameroon are indigenous Mbororo people from the Bochambele, Bouar, Baoru and Yaloka communities, in western and northern CAR, which were targeted for their wealth and livestock.

“We feel safer here in Cameroon, although we came with nothing,” Shaibu, a member of the Mbororo community, told IRIN.