Read about what we achieved.
JAKARTA

Thousands of people displaced by steadily falling ash from an active Mount Sinabung thought they would be able to return to their homes and resume their livelihoods, but those hopes have been dashed by a deadly eruption on 1 February.

“I don't think they will be able to go home any time soon,” Marthin Hutabarat, a spokesman for the Indonesian Red Cross, told IRIN, saying those who had been courageous enough to go to their homes have since returned to shelters.

"The displaced people will need livelihood support for the next few months, as many of their crops have been destroyed," said Benny Kaban, a protestant priest and aid worker who has been assisting in the coordination of assistance.

At least 16 people were killed when the 2,600m volcano in Karo District, in the north of Indonesia’s Sumatra Island, unexpectedly erupted on Saturday after months of rumbling, and spewing hot gas and rocks.

On Friday the authorities had allowed thousands of residents from more than a dozen villages to return to their homes on or near the slopes of the volcano after a lull in volcanic activity created a false expectation of safety.

Stress in the shelters

Since Sinabung began its latest round of eruptions in September 2013, more than 30,000 people have been displaced and are now living in 42 shelters set up in government buildings, schools and mosques, and other centres across Karo District, outside the 7km exclusion zone established by the government in January.

Since September, the Red Cross has distributed three million litres of clean water, food, blankets and tarpaulins, as well as 200,000 face masks to prevent the fine volcanic ash from being inhaled, and has also provided psychological counselling for displaced residents.

Some who had been staying in temporary evacuation centres for weeks had already begun showing signs of stress, worrying about the loss of their crops and the income from them. Most residents in the area are subsistence farmers and make their living growing coffee, cocoa or fruit.

“They have enough food to eat [in the shelters], regardless of the nutritional quality, but it’s clear that they are suffering psychologically,” Hutabarat said. “We see people who stare emptily into space. Their farms and homes have been destroyed and they don’t what they are going to do in the future.”

Kanto Tarigan, 32, a coffee farmer who left his village a month ago and sought refuge in a church in the Kabanjahe Village, feared he would lose his house and his farm. “I want to go home but I’m afraid. I don’t know how long I must live here, but I hope it will end soon,” he said. “I’m worried about my plantation. Some of my friends defy warnings and go to see their farms every day and return at night.”

Most of the 16 people who died in the eruption on 1 February were in the village of Sukameriah, less than 3km from the peak of Mount Sinabung, said Sutopo Purwo Nugroho, a spokesman for the National Disaster Management Agency (BNPB).

In January, the government extended the exclusion zone from 5km to seven, but on 31 January, the BNPB said residents living in 16 villages farther than 5km from the peak were allowed to return home after days of non-activity. 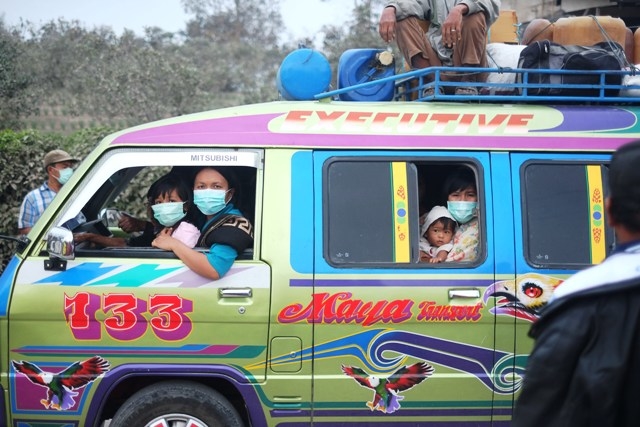 Indonesian President Susilo Bambang Yudhoyono visited the displaced people and spent a night in a tent. He urged the authorities to improve sanitation, food and other services for people living temporary shelters. BNPB started a cash-for-work programme in which each family receives 50,000 rupiah (US$4.10) per day, Nugroho said.

The government is also giving farmers seedlings and saplings, and more than 6,000 students from primary school to university level will receive scholarships so they can continue their education, he said.

Jakarta is seeking to have the loans of displaced residents restructured with reduced interest. “The central government has spent 50 billion rupiah ($4.1 million) on handling the Sinabung disaster and will spend more as the need arises,” Nugroho said.

“The Indonesian government is likely under immense pressure to relieve the stress of more than 30,000 evacuees. It can be very hard to predict how an eruption of this style, with collapses of the lava dome producing explosions, will progress,” Erik Klemetti, an assistant professor of Geosciences at Denison University in the United States, wrote in an email.

He noted that even though the February eruption was not unexpected, the volcano remained unpredictable. “Based on what I have read, it does seem that the activity could last for the foreseeable future, which for volcanic eruptions might be weeks or months.” He suggested that the government maintain the exclusion zone at 5km.

“The deaths on Saturday were due to people getting too close to the volcano,” he said. “However, that is where the volcanic crisis becomes a humanitarian crisis. How to handle the large number of evacuees having to stay away from their homes and livelihoods for an indeterminate amount of time is one biggest challenges when it comes to tackling a disaster such as this.”

Indonesia covers an archipelago of more than 17,000 islands and has more than 240 million inhabitants. It also has over 150 active volcanoes.