Just before his 18th birthday, Naik Mohammad relocated to Afghanistan, a country he only knew from family stories and the television news.

Mohammad, an Afghan refugee born and raised in Pakistan, was part of the world’s largest voluntary repatriation of refugees - the return of nearly six million Afghan refugees in the aftermath of the US-led invasion of their country and the defeat of the Taliban in 2001.

But the returnees’ fortunes, like that of their homeland, have been mixed.

Eight years after arriving, Mohammad runs a barbershop on what amounts to the high street in the Sheikh Misri returnee settlement in Nangarhar Province. “This is my own country. I have my own business and no one hassles us. Things are not perfect, but it’s better to be here. It is home, and we now have friends,” he told IRIN.

Millions of Afghans fled over the border to Pakistan following the communist takeover in the late 1970s. Now, the majority have returned, transporting their belongings, and hopes, back home in overloaded trucks up the Khyber pass and across the Torkham border post.

“The three generations of Afghan refugees in Pakistan all have slightly different expectations,” said Neill Wright, the UN Refugee Agency’s (UNHCR) representative in Pakistan. “For the younger two generations who choose to repatriate, they have never lived in their own country, but they’ve decided that it’s time to try. For the older ones, they know more or less what they’re going back to, because they left it in the first place… but there remain huge challenges in reintegrating them successfully in Afghanistan.”

The overthrow of the Taliban brought with it the promise of peace and billions in development money, while in Pakistan the closure of certain refugee camps persuaded many Afghan families to return.

Currently, refugee families heading back home through the UNHCR-supported voluntary repatriation scheme get US$150 per person, plus some non-cash aid, and help with transport costs to help them return to their village of origin. Most of those in Pakistan are ethnic Pashtuns from provinces close to the Pakistan-Afghan border.

But for returns to be sustainable, humanitarians say refugees need a number of key things: land, jobs and basic services, all in the right place. So far, the returnees - who make up around a quarter of Afghanistan’s current population - have been struggling.

For many refugees, fleeing to Pakistan meant transitioning to a more urban environment. As they return, many are choosing to live close to urban centres.

“You haven’t seen many refugees returning and then going back to Pakistan immediately. But it’s a tough environment to come to, and I think there are a number of issues,” said Nigel Jenkins, Afghanistan country director for the International Rescue Committee (IRC). “You have to remember that Afghanistan is primarily an agrarian country, and a lot of these refugees came from rural areas that are less secure. They’ve been brought up in camps in many cases, so they’re used much more to an urban-type environment.”

Kabul and Nangarhar provinces are home to more than a third of all returnees, according to UNHCR.

“They have clearly voted with their feet, and if offered shelter and even land in rural areas, they go for urban sites, even in a tent, because they perceive there to be better livelihood opportunities and services,” said Bo Schack, head of UNHCR Afghanistan.

Sheikh Misri township, close to Jalalabad, has been one of the more successful land allotment projects for returnees, but even then the settlement’s site is far from ideal.

“When we came, the [Afghan] government gave us this land in the desert, full of mines,” Mohammad told IRIN at the dusty township, 15km from the nearest road and the outskirts of the city.

The allotment was one of five areas in a national pilot scheme to allocate land to refugee returnees, organized under presidential decree number 104.

“It’s difficult being in the desert so far from anywhere,” said Qari Rahmatullah, a member of the Sheikh Misri Shura (council). Most of the refugee families here originally came from Nangarhar Province, and now prefer living close to Jalalabad for the security, jobs and schools. “The first year was hard, but we’re in a far better position than when we arrived. Still, life is not particularly easy.”

Around 1,800 families now live on the site, where they have received a wide range of assistance from UN agencies, development actors and NGOs, which helped install water pumps, build roads and set up four schools.

But while the formal land allotment and the proximity to Jalalabad has allowed the township to resemble a well-organized community, more than five years on, responsibility has yet to pass, as planned, to the local municipality. In the eyes of many local officials, it remains a camp rather than an integrated part of the city.

That local buy-in is crucial, according to UNHCR’s Schack.

“Increasingly, land allocations are way outside of current communities. If there’s no water, if there’s no clear engagement of national authorities and integration in national programmes, then these won’t work. It needs political buy-in and a general willingness to integrate a community in the existing set-up,” he said. “It has to be led both by the community and the authorities - if one element isn’t there then the whole thing falls apart.”

Landless in their homeland

Getting land rights is seen as a key part of successful refugee returns, an issue marred by a trend towards land grabbing.

Head of the Jalalabad offices of the Directorate of Refugees and Repatriation, Alhaj Ghulam Haider Faqeerzai, says they have registered 142,000 returnee families and 128,000 applications for land, but they have just two formal settlement sites with roughly 10,000 families.

Many of the rest are squatting on land that does not belong to them.

“The efforts are always there, but we have immense problems. Other provinces have more adequate land. The problem here is not with resources but with the land,” said Faqeerzai.

Those without land titles are frequently threatened with eviction, and humanitarian and development actors face restrictions in providing services and support to families when they are living on someone else’s land. There are also increased chances of creating tension with the pre-existing population.

A hairdresser in Sheikh Misra returnee refugee settlement on the outskirts of Jalalabad. Naik Mohammad (pictured) was born in Pakistan but returned in 2004. 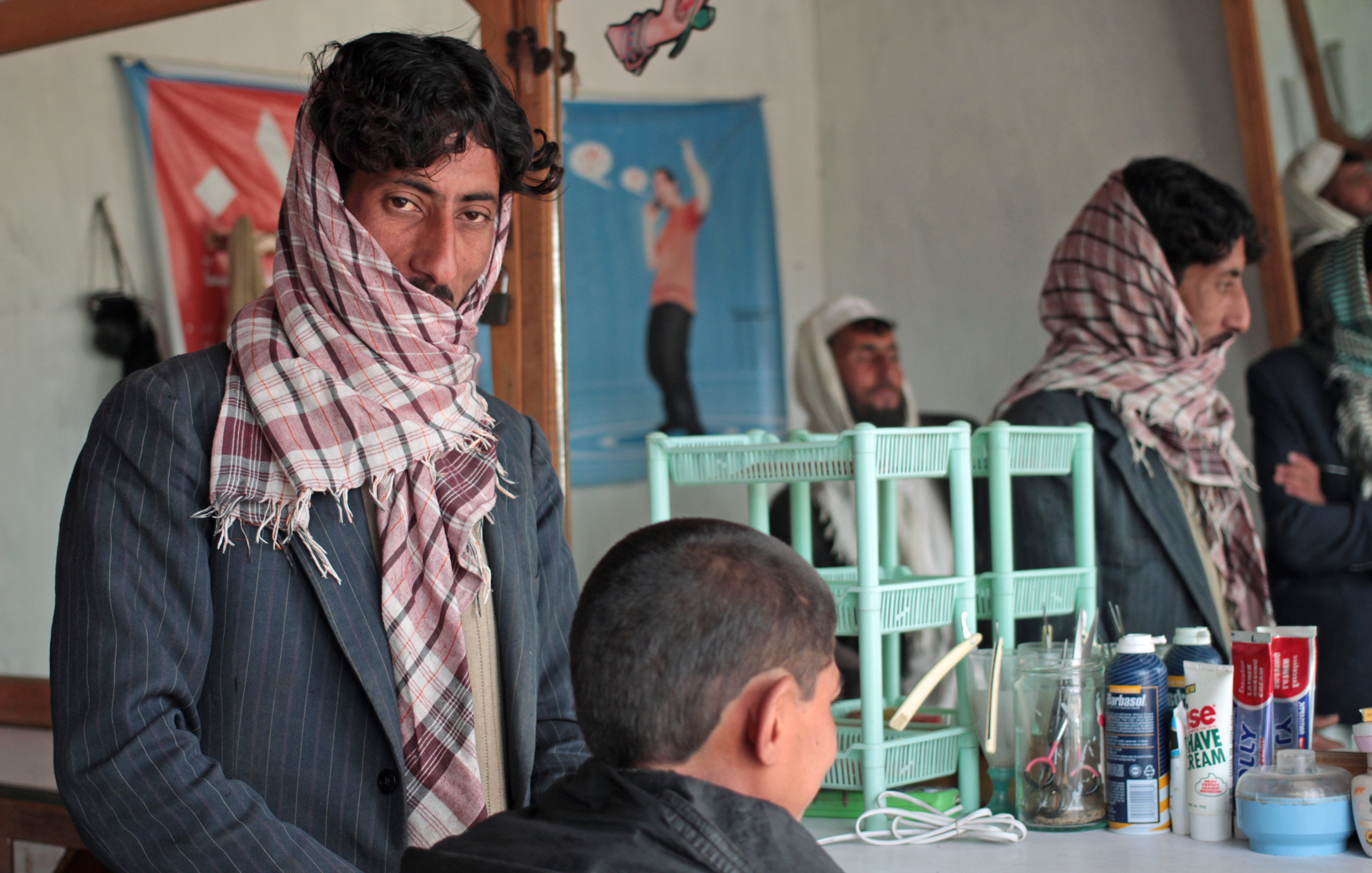 At the start of the gravel track that leads to the Sheikh Misri township is the informal settlement of Lower Sheikh Misri. There, communities squat on land owned by the water and sanitation authority.

“We turned down the chance of moving to the land allocation site because we wanted to stay near the road,” said Allah Gul, head of the shura in Lower Sheikh Misri. “With time, the numbers here have decreased - there is no work, security or land.”

They hold out for the promise of getting land rights, but until then they will receive little support.

Aid workers say that just as significant an issue is job opportunities. In some cases, refugee returnees are unable to find work and end up going back to Pakistan - this time as undocumented migrants.

Sher Ali, who moved to Lower Sheikh Misri from a refugee camp near Peshawar in 2008, has been happy with the return to a country he only saw as a small child. Like many returnees, he relies on finding work as an unskilled labourer.

“Honestly, I’m happy with the decision to move back here. There is more work here, and I don’t have such a problem with debt.”

That is not an opinion shared by Bashir Ali, a returnee who had previously fled to London through Iran and Turkey but was eventually sent back home: “There’s no work, no money and no security.”

In the formal Sheikh Misri township, investment in construction created work when residents first moved in, but that has since diminished. Some day-labour is available in Jalalabad, but for a day rate of 400 Pakistani rupees (the main currency in eastern Afghanistan, about $3.80), half is lost to the transport costs required just to get to the city.

Afghan refugee returnees from Pakistan living on the outskirts of Jalalabad. 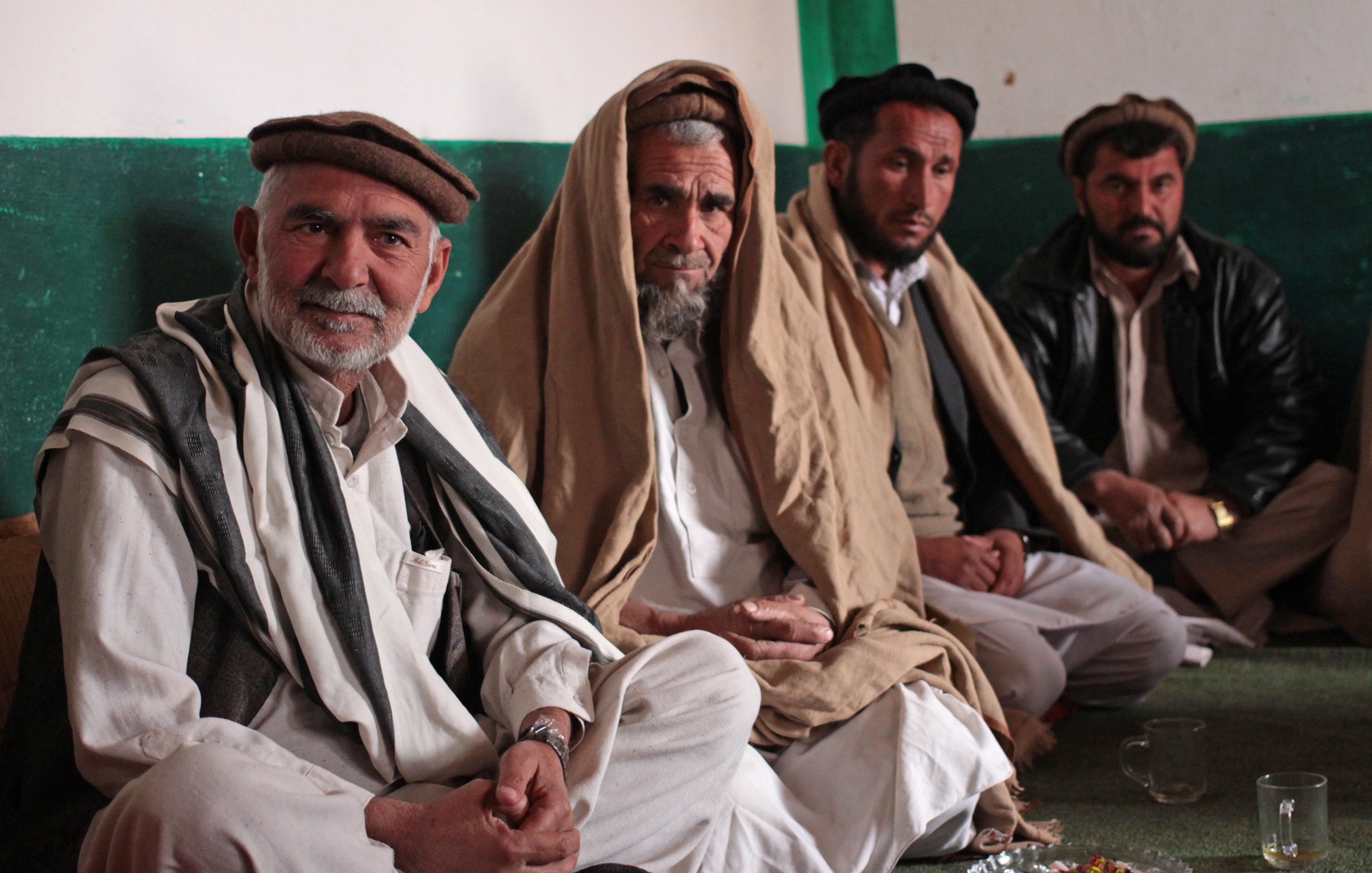 The recent resurfacing of the main access road has improved transport links, but the lack of nearby jobs is a major reason why only around 20 percent of the 10,000 potential family land plots are occupied at Sheikh Misri.

Both the formal and informal communities spoke of sending their children to work in the brick kilns in Kabul during the summer months to generate some income.

Some vocational training schemes are available. The International Organization for Migration (IOM) recently trained 350 undocumented returnees in skills like wiring, construction, plumbing and motorbike repair. But the vast majority of returnees have few skills to peddle, and the land they are given is rarely suitable for farming.

Not all the Afghans living in Pakistan have refugee status. IOM staff say there are at least a million undocumented Afghan migrants in Pakistan, many concentrated in Khyber Pakhtunkhwa Province.

Because they are not part of the formal return process, they are particularly vulnerable when returning home, and may be exposed to deportation or harassment from the authorities in Pakistan.

“Most of them share the same story. The military or police threaten to destroy their home and they say they were forced [or feel forced] to return,” said IOM’s Omar Majeedi, who is responsible for assisting undocumented returnees. “They have a totally different experience coming back from official refugees,” he said.

Because of the risk of their moving back and forth across the border to claim aid - known as “recycling” - no cash is given to undocumented returnees. But they do get a meal, a food package from the World Food Programme (WFP) and some other non-food items, including blankets, cooking pots and soap.

Some returnees who have spent more than two decades outside the country do not remember the name of their home district, requiring guidance from IOM staff.

The returns pose “considerable challenges to the country’s absorption capacity”, according to the 2014 Humanitarian Needs Overview from the UN’s Office for the Coordination of Humanitarian Affairs.

While official refugee returnees are generally thought to receive more support and have stronger coping mechanisms than the country’s 620,000 conflict-affected internally displaced people (IDPs), in reality their situations can be quite similar.

Aid industry jargon in Afghanistan now talks about “returnees living in IDP-like-situations”. Aid workers in the field reported that while refugee returnees seem to have an easier time getting identification documents than IDPs, there are challenges moving them from humanitarian aid support to regular Afghan development services.

“We push the returnee issue,” said Schack, “but we need to make sure that returnees become Afghans.”

Around 1.6 million registered Afghan refugees continue to live Pakistan, waiting for land and livelihood solutions that will offer them a reason to leave their host country.

“We tell people to return from Pakistan,” said Rahmatullah at the Sheikh Misri Shura. “The situation there is not so good. But then what will happen here in 2014? We’ll be keeping our eyes on the transition,” he adds.

The government, meanwhile, acknowledges that any sudden rise in returns would overwhelm their current capacity.

“We cannot accommodate them [refugees in Pakistan]; we are not ready or prepared to receive them,” said Faqeerzai, of the Directorate of Refugees and Repatriation.

But thanks to communication between Afghan refugees abroad and returnees, and the occasional “go and see” visit organized by UNHCR, those in Pakistan probably have a good sense of what is best for them.

“These people have ears and eyes here,” said Mahir Safarli, the head of the UNHCR sub-office in Jalalabad. “They know better than we do whether it’s safe to come back.”