Up to 37,000 people - both Nigerians and Nigeriens - have fled Boko Haram violence in northeastern Nigeria since early 2012, and most are sheltering with families in neighbouring Niger, but the aid response thus far has been patchy. Government efforts to register the displaced have been slow, and the refugees among them have yet to be given refugee status.

In the latest attacks on 26 January, suspected Boko Haram militants killed over 100 people in the villages of Kawuri and Waga Chakawa, in Borno and Adamawa States, respectively.

On 18 January, over 500 people fled Ghashakar Village, in Nigeria's northeastern Borno State, crossing the Komadougou River to reach Gasseré in Niger, 2km away. IRIN spoke to the displaced in Gasseré.

Three children died in the crossing as they could not swim, said Kelli Moustaph, a senior field officer at the UN Refugee Agency (UNHCR).

Dozens of villagers corroborated the same story: Their houses were burned while they were sleeping. Residents told IRIN 10 people died in the incident, 40 shops were burned and seven vehicles were lit on fire. "We left without shoes, with nothing. We just took our children," said Fatimata Boura, who is in Gasseré with her family of 13.

Men from Ghashakar told IRIN their village was targeted because youths had set up a self-defence militia to try to defend themselves from the violence. Militia members have fled to elsewhere in Nigeria and Niger, said Oumar Moustapha, a bush taxi driver whose vehicle was burned in the attack.

Gasseré households have each taken in a family, with occupancy in some homes swelling by dozens of people. Yakaka Kiari, wife of the village chief, said they had taken in 30 people, most of them children. Most families are seriously overstretched in terms of space and, especially, food. "With aid, we'll be able to help more. Even if it's crowded, we'll try to get by," she told IRIN.

Most of the displaced in Gasseré are ethnic Kanuri, like their hosts, while 120 Hausa and Peulh households are sheltering in Garindogo, a site 1.5km away, according to the International Committee of the Red Cross (ICRC). The Kanuri live mainly in northeastern Nigeria, southeastern Niger, western Chad and northern Cameroon. They say they have been very warmly welcomed. "It's like being at home. We want to stay here," said Falmatta Modou.

At a UNHCR distribution of kitchen kits, blankets, jerry cans and mats targeting 60 families, the mayor of the commune, Ousseini Boukar, told IRIN, "We're overwhelmed. Life is already very difficult for people here, so it's very hard for families to feed 10 more people."

Niger came in last out of 186 countries on the UN's 2013 Human Development Index, and the millet, wheat and maize harvest was poor for most people in Gasseré Village. The rains came late and ended early, so plants were unable to mature. Those practicing 'decrue', or "recessional", farming on the banks of the river, who received seeds from the government, lost most of their crops when the river flooded twice.

It is now red pepper season, but insects known in Niger as 'sauterraux', have ravaged dozens of hectares of the crop. Local farmer Chiarami Sanda said many families in the village did not have more than a couple of weeks of stocks.

The attack took place 2km from the Komadougou River, which separates Niger and Nigeria.

"We have no emergency stocks at the government level," said Mayor Boukar. "We need outside help."
A recently completed joint food security assessment by the World Food Programme (WFP) and UNHCR revealed that nutrition centres in the main sites sheltering displaced populations have higher rates of severe acute and moderate malnutrition than in May 2012, when the displaced started to arrive.

Kaselma Bouma, chief of Gasseré village in Niger, on the Nigeria border, which took in 80 displaced families who fled a Boko Haram attack on 18th January. UNHCR and ICRC provided aid to some of the families at the end of January. on the border of Niger a 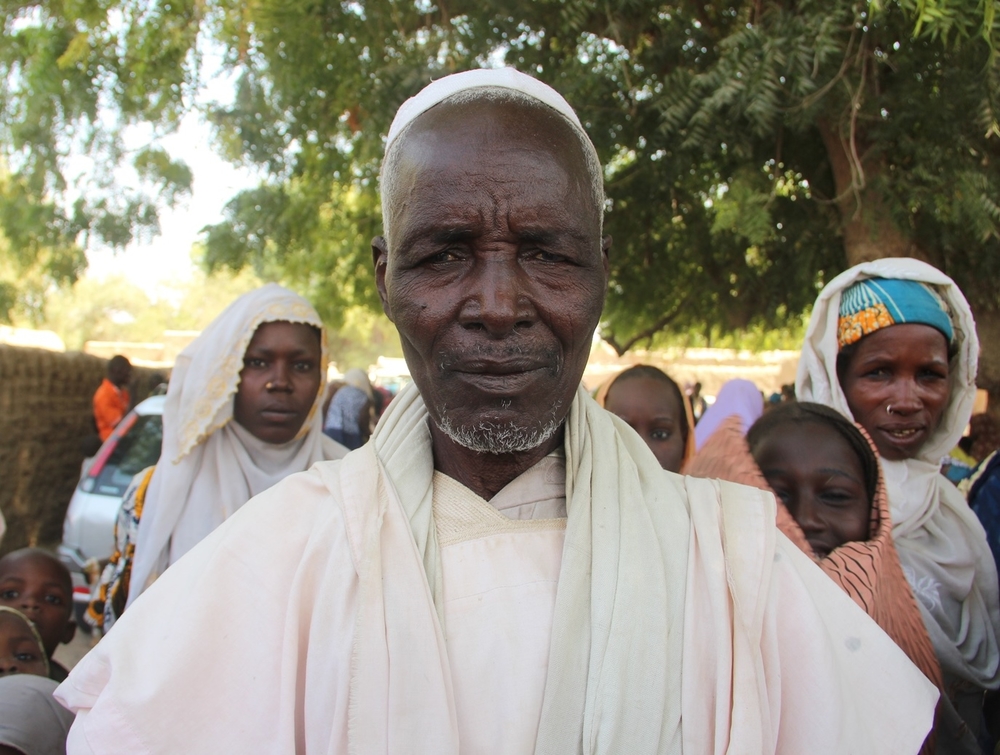 The insecurity has also taken an economic toll. Nigeriens and Nigerians regularly cross the river into each other's countries to trade goods and access services. Now this trade has been interrupted. Women in Gasseré told IRIN they used to head to Nigeria weekly to mill flour as they do not have mills in Niger, but they are now too scared to go.

On 25 January, ICRC distributed food to all 200 of the displaced families it had registered. It is targeting some 1,400 households spread across several communes.

WFP has also given some aid and is currently assessing the food security situations of both the displaced and host communities, with a view to stepping up assistance.

Since May 2012, UNHCR has distributed non-food items to about half of the displaced families across nine villages, estimates Adamou Maina, head of UNHCR's Diffa office. The agency is currently devising a shelter strategy with ICRC, focusing on transitional shelters made of wood and plastic sheeting. Families will be given shelter on a case-by-case basis, he said, targeting the displaced or host families, depending on the needs.

But aid agencies and the government have struggled to reach all of the displaced. Because they are staying with host families in some 20 villages, they are less visible. "They are so dispersed, it's very hard to respond or to reach them," said Daniel Hadji Abdou, the director of Diffa's registry office (DREC), which is charged with registering the displaced.

Reaching Bosso, 100km from Diffa town, where the displaced make up an estimated 29 percent of the overall population, takes two hours in a 4x4 over sandy roads.

Most of the displaced in Diffa town who spoke to IRIN said they had received no aid. Afnori Hawanna Mamouni, chief of the Diffa Afnori neighbourhood, said many arrived with nothing to eat and no money. They are either being put up with families or are renting small accommodations. "We gave them food, lodging, help if they're sick, but there are lots of problems that we can't take care of ourselves," he told IRIN.

The government registered 37,000 displaced in September 2013, but has not yet updated its count. Meanwhile other agencies, including ICRC, the International Organization for Migration and NGO ACTED, have tallied more recent figures but only in the communes that they are targeting.

The majority of the displaced are returned Nigeriens who left for Nigeria 30 to 40 years ago, while 22 percent are from Nigeria, according to DREC's 2013 figures.

Part of the government's reluctance to formally register both groups relates to fears that returnees may try to pass themselves off as refugees, or that Boko Haram members may do the same, said Abdou.

The government gave temporary refugee status to those who applied for it, but the status was not applied prima facie, said Ibrahima Abdou, the Diffa representative for the UN Office for the Coordination of Humanitarian Affairs (OCHA).

Further complicating the situation, the children of Nigeriens who have married Nigerians and who have chosen Nigerian nationality may also be eligible for refugee status, he said.

The situation is very volatile, with people crossing the border weekly, and new waves still arriving, said DREC's Abdou. "The situation is not stable. The displaced might go back soon," he said. The government will launch a formal registration process soon, and those who are eligible will be given refugee status, he added.

"There are more job possibilities in Nigeria. Here, they'll just have to wait for aid," OCHA's Abdou noted.

The Komadougou River, which separates southeast Niger and northeast Nigeria. On 18 January, suspected Boko Haram militants burned Gashakar village in Nigeria 2km from this border, causing over 500 people to flee to Gasseré village in Niger. 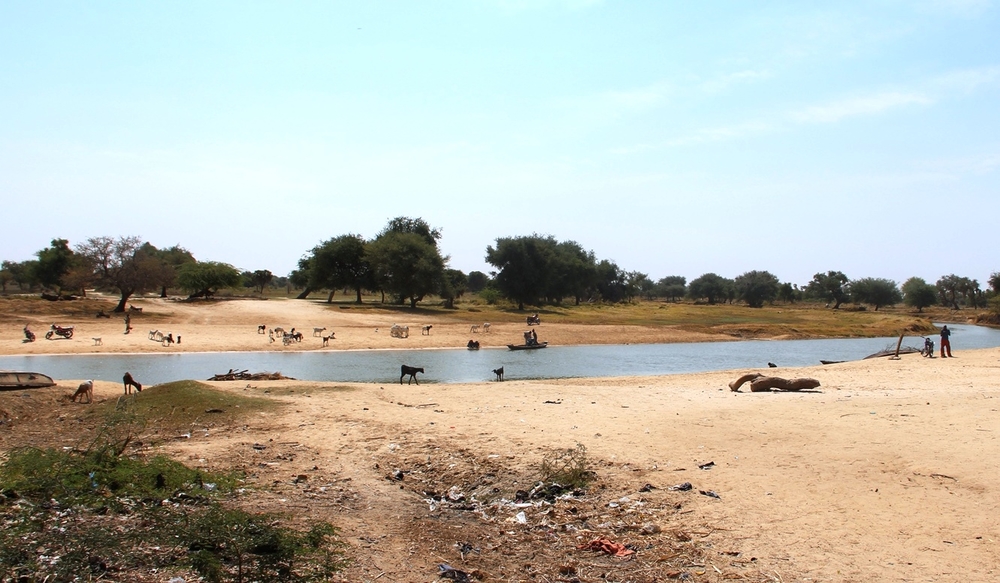 Danny Bouga, a vet from Baga who fled to Diffa town two months ago, echoed this sentiment. He told IRIN, "I can't find work here. I want to return. I can't stay here without a job."

Some people have been displaced for 18 months, having fled fighting in Maiduguri or the attacks in and around Baga. They said the aid response has been spotty, and some said they have received nothing at all.

OCHA tried to help the government outline a response plan, but it has been languishing in the governor's office for weeks, unsigned. Only once an official appeal for aid has gone out can aid agencies step up their efforts, said OCHA's Abdou.

Nigerien soldiers and military police have been stationed at the entrance to Gasseré, on the river facing Nigeria, some 30m away. But despite their presence, many villagers feel unsafe given their proximity of the violence. Village chief Kaselma Bouma told IRIN, "They [the displaced] came because they wanted to feel safe.but now we do too."

DREC's Abdou told IRIN the border is militarized, and "security is guaranteed."

But the mayor of Bosso, Elh Bako Mamadou, told IRIN, "There simply aren't enough soldiers to man the whole border at once."

OCHA in Diffa is trying to mobilize more help, pushing the government to take a lead and to advocate for the rights of the refugees, but getting accurate information has been a difficult job said OCHA's Abdou. "These displaced people are invisible. They need more people to advocate vocally for them."

The local authorities are also advocating for help. Bosso's infrastructure is creaking under the pressure, said Mayor Mamadou, noting that 100 children are now squeezed into a classroom built for 30. "We've advocated to UNHCR, to the national authorities... We need to give these people land. We need to give refugees their refugee status. They need a place. It needs to be organized from the start," he told IRIN.

As for the displaced, while many expressed a desire to return home, others said they were too tired of the violence to return to Nigeria.

A displaced Nigerien from Ghashakar, Ousmane Katiala, expressed little faith in ability of the government or military to sort out the conflict. "Only God can come up with a solution to this problem. It's not possible for men to do so," he told IRIN.