Indigenous communities in Indonesia are using GPS technology to demarcate the boundaries of their ancestral lands, a move many believe could also help mitigate the negative effects of climate change.

“Community mapmaking has been a successful tool to show the government that we are here, and that we want to protect our lands,” said Rukka Sombolinggi, a spokesperson for the Indigenous Peoples' Alliance of the Archipelago (AMAN), a Jakarta-based secretariat representing more than 2,000 indigenous communities.

Indonesia's dense forests are home to an estimated 50-70 million indigenous people, and 10 percent of all known plant species, according to AMAN and the Rainforest Action Network, a non-profit international environmental advocacy group headquartered in San Francisco.

“Indonesia’s forests are recognized as important, not only at local and national levels but also at the global level, as they include some of the world’s most important forests with the highest values for biodiversity and carbon,” Gustavo Fonseca, the head of the Natural Resources Team for the Global Environment Facility (GEF), told IRIN. GEF is a funding mechanism for the UN Convention on Biological Diversity and the UN Framework Convention on Climate Change.

Maps stand up in court

More than 600 cases for land rights have been filed in Indonesian courts by indigenous communities in the past three years, according to the Tebtebba Foundation (Indigenous Peoples' International Centre for Policy Research and Education), based in the Philippines. These advocates of sustainability and tribal rights hope the two- and three-dimensional maps will help the thousands of diverse aboriginal groups to guard the health of the environments they depend on for survival.

The FPP says this has led to a growing number of land conflicts, rising to 8,000 disputes in and out of court in 2012, according to Indonesia's National Land Agency (BPN). “Map-making has helped them to assert their claims to the land by identifying exactly the areas they have lived since time immemorial,” said Vicky Tauli-Corpuz, the head of the Tebtebba Foundation.

Indonesia has more than one thousand indigenous groups who have been participating in mapping for the past two decades, according to AMAN and the FPP. Marcus Colchester, the senior policy advisor for the FPP, says new technology increases the speed at which it can be done.

The digitized maps - which include spatial elements (physical geography of land formations and resources) and non-spatial information (sacred cultural and ritual sites) - cover more than 2.4 million hectares of indigenous areas, from Sumatra island to Kalimantan and Sulawesi.

How well the maps are used, and how effective they become, depends on the organization within communities, and the balance of power with local authorities in each area, Tauli-Corpuz notes.

On behalf of aboriginal communities, AMAN submitted 256 maps to the national Geospatial Information Agency in mid-November 2012, in accordance with the government's One Map Initiative (OMI) launched in 2012.

“They have accepted our maps, and are considering and acknowledging them [on a policy level],” said Sombolinggi. “It is critical evidence for our land rights.”

Amendments to the 1999 Forestry Law, based on a court ruling in May 2013, removed the classification of customary forests as 'state forests' and this “was helped along by the submission of the maps,” said Tauli-Corpuz.

Indigenous communities in Indonesia are using GPS technology to demarcate the boundaries of their ancestral lands, a move many believe could also help mitigate the negative effects of climate change 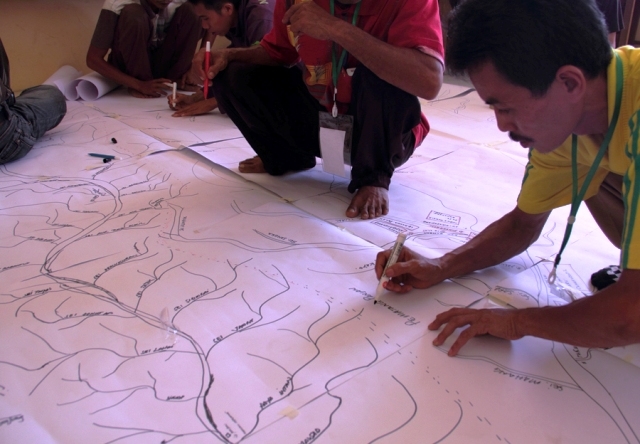 The caretakers of biodiversity

Land rights are intrinsically linked to sustainability, and to mitigating climate change by preserving the earth's forests, which are seen by many as the “lungs of the planet”, say experts.

“Recognition of indigenous peoples' rights is an essential plank in this policy reform, which will not only slow deforestation but will also secure community livelihoods, reduce land conflicts and foster local food security,” Colchester told IRIN.

Maintaining biodiversity aids adaptation by “[removing] carbon dioxide from the atmosphere... and reducing emissions from forest degradation”, says the Convention on Biological Diversity, an agreement signed by 150 leaders at the 1992 Rio Earth Summit.

Indigenous people have high stakes in protecting biodiversity because they depend on its survival for their own, hunting and gathering non-timber forest products for their daily needs, according to Nicole Girard, the Asia Programme Coordinator for Minority Rights Group International, a UK-based charity.

“Once their resources are threatened by either development projects or climate change, the impact is felt more directly and more acutely than by those in cities,” Girard said.

Over the generations they have learned to live sustainably and have a keen understanding of a forest's limitations, making them the ideal caretakers of forested land. For example, a traditional fire prevention practice preserves eco-system functioning by creating barriers to contain flames, protecting the deepest and most essential parts of the forest, Tauli-Corpuz explained.

Fonseca pointed out that “Indigenous peoples’ rights to forests have long been recognized as a crucial component to maintain the environment and address climate change.”