Women and girls in areas affected by Typhoon Haiyan face an increased risk of violence, sexual exploitation and trafficking, say experts, since the storm struck the central Philippines more than five weeks ago, leaving over 6,000 dead and more than 4 million displaced.

“Even before Haiyan, the provinces of Leyte and Samar were identified as trafficking hotspots. Women and girls would be trafficked to Manila or abroad for domestic work,” said Devanna De La Puente, the coordinator of the gender-based violence sub-cluster for the Haiyan Relief Effort.

The latest US State Department Trafficking in Persons Report states there were 227 trafficking cases filed with the Philippine Department of Justice (DOJ) in 2012, but many more incidents go unreported.

According to the 2013 Global Slavery Index compiled by the Walk Free Foundation, an Australian-based anti-trafficking organization, there are more than 140,000 Filipinos around the world who were trafficked, or coerced into forced labour or child marriage.

The Multi-Cluster/Sector Rapid Assessment (MIRA), a cooperative effort involving more than 40 humanitarian agencies across nine provinces, released on 28 November, notes that the incidence of poverty (defined in the Philippines as the segment of the population that does not have sufficient income to provide for their basic needs) in Leyte and Samar provinces is estimated at between 20 and 40 percent. In some parts of Samar the incidence of poverty is as high as 60 – 80 percent.

“Lack of livelihood opportunities one month after the typhoon, and the mass exodus of people leaving for Manila [the capital] – often without documentation because it was washed away – has made tracking people difficult, and trafficking more of an issue,” said De La Puente.

Many survivors flew to Manila in empty military cargo planes on the return journey from delivering relief goods to people in the affected provinces.

According to the Department of Social Welfare and Development (DSWD), an estimated 20,000 people from typhoon-ravaged areas fled to Manila to escape the devastation, even if they had no place to stay in the city.

“We’ve alerted all port authorities, law enforcers and social workers who are processing the evacuees to be on increased vigilance for potential trafficking,” said Jan Arceo, a special projects officer for the Inter-Agency Council Against Trafficking (IACAT), a multi-sectoral group that coordinates and monitors all anti-trafficking efforts.

“We’re also giving out information leaflets about the dangers of trafficking and illegal recruitment. With this information, the survivors can know what their rights are and empower themselves,” Arceo said.

However, other authorities point to the increased dangers that are closer to home, for instance, in evacuation centres.

“You have a lot of people in a crowded place, without much to do. There is no electricity, so a lot of [common] places are not well-lit. These are all factors that put women and girls at increased risk for violence,”said Nolibelyn Macabagdal, a DSWD social worker.

Of the four million people who were displaced, more than 100,000 are still living in 381 evacuation centres, the National Disaster Risk Reduction and Management Council (NDRRMC) reported on 16 December.

In 2008, the National Demographic Health Survey (NDHS) estimated that 20 percent of women between the ages of 15 and 49 have experienced physical or sexual violence since they were 15 years old.

Based on the NDHS prevalence of gender-based violence in the affected provinces, the UN Population Fund (UNFPA) estimates that 375,000 women and girls had experienced sexual violence before Haiyan.

The agency warns that without concrete efforts to improve security, and interventions focused on gender-based violence and trafficking specifically targeting women and girls, this number could increase by 75,000.

The International Organization for Migration (IOM), which is overseeing evacuation camps for the municipality of Guiuan in Eastern Samar Province, has built separate bathing and toilet facilities for men, women and children.

“These facilities are located on either side of the camp to make sure that people don’t have to walk very far to get to them,” Andrew Lind, the IOM focal point for shelter and camp coordination management (CCM), told IRIN. Solar lamps have been installed to light walkways and common areas like water pump stations.

Designated bathing and toilet areas help reduce protection concerns at evacuation centres in the central Philippines in the aftermath of Typhoon Haiyan. More than 6,000 people lost their lives in the category 5 storm 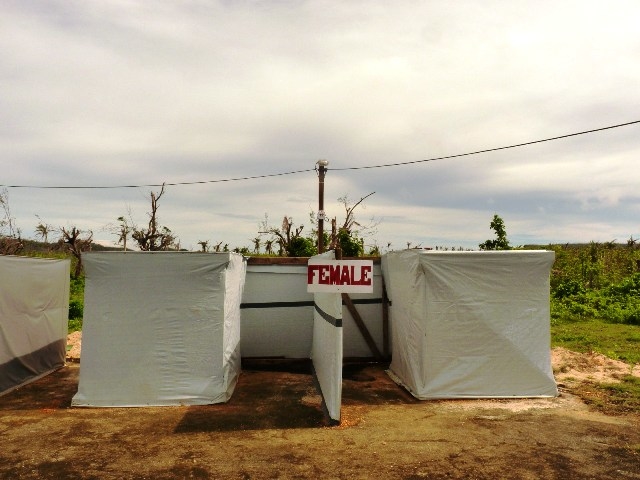 The DSWD, in partnership with UNFPA, has also begun setting up women-friendly spaces in selected evacuation centres and communities in areas with the highest number of cases of violence against women, based on police reports. In these spaces, usually in a separate part of the evacuation centre, they can receive counselling from DSWD-trained women. To date, eight spaces have been established: five in Tacloban, one in Roxas city, and two in Eastern Samar Province.

But with overstretched resources, coverage of the typhoon-stricken regions - an area roughly the size of Portugal - remains a challenge. The Philippine National Police (PNP) has been called in to augment protection efforts and is preparing to deploy female police officers from various parts of the country to these regions.

Macabagdal, the social worker, said, “This [deployment] will really help supplement the need for increased security for women and girls.”