Read about what we achieved.
ISTANBUL

In a normal week the customers of Connie Cruz, who owns Connie's Mini Market in Istanbul, send home up to US$4,000 in remittances to relatives in the Philippines. There are around 5,000 members in the community, many of whom gather daily at this popular meeting place to drink tea and eat a sweet rice cake called Bibingkang Malagkit.

In the aftermath of Typhoon Haiyan, which struck the central Philippines on 8 November, killing close to 4,000 people and leaving millions in need, the level of remittances from her tiny shop has jumped three-fold.

According the International Organization for Migration (IOM), more than 10 million Filipinos - around 10 percent of the population - live overseas.

The majority are in the United States (3.4 million), followed by Saudi Arabia (1.5 million), and Canada (842,000). Remittances help sustain struggling families back home, where wages are low compared to the cost of living.

Most of the Filipinos overseas are low-salaried workers in the service sector, yet the billions of dollars they send home play a vital role in the economy, accounting for close to 10 percent of GDP.

The World Bank estimates Filipinos abroad will send back $26 billion in 2013, underscoring the importance of this community in relief efforts.

“The potential is absolutely huge,” said Stewart Davies, Regional Communications with Communities Officer for the UN Office for the Coordination of Humanitarian Affairs (OCHA). “The diaspora does play a vital role, and it’s imperative we don’t lose sight of that in the coming days, weeks, and months ahead.”

The category-5 storm made landfall in the Philippines on Friday 8 November, and the outpouring of support from Filipinos in the diaspora is already being realized, with fundraising activities taking place across the world.

In the US, Julia McGinnis, the daughter of a Filipino mother and an American father living in Washington, set up a fundraiser on Crowdrise, a crowd-sourcing website, and has already received more than $12,000. "I was in tears. I couldn't believe the quantity of people who donated," she said.

The National Alliance of Filipino Concerns (NAFCON), based in San Francisco, says it has raised more than $200,000 through its website alone. “We feel the involvement of the diaspora is very important and we are intensifying our fundraising effort,” said spokesperson Ryan Leano.

NAFCON sends the money to its grassroots partner, BALSA Mindanao, a nationwide relief network based in the Philippines, which in turn sends community outreach teams of first and second responders into disaster areas.

Members of the 5,000-strong Philippine community in Istanbul held a yard sale on 17 November to raise money for victims of Tyhoon Haiyan, which struck the central Philippines on 8 November 2013 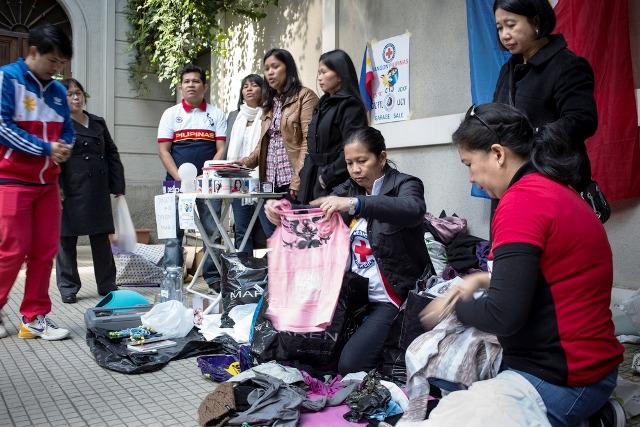 In Brisbane, Australia, the Filipino community was already planning a fundraising concert for victims of the 7.2 magnitude earthquake that struck Bohol on 15 October, when more than two hundred people were killed, over 14,000 buildings were completely destroyed and more than 73,000 structures were damaged. Hundreds of thousands of people were displaced, and tens of thousands of them have again been affected by Typhoon Haiyan. The concert will now also raise money to benefit people suffering from the destruction brought by the typhoon, while Filipino Radio Brisbane is appealing for canned food, clothing, blankets, and other relief items.

A collection drive in Chicago last week by the local Filipino community resulted in a “spectacular response”, says James Villar of the Filipino American Council Chicago. They received 5,000 boxes of food, medical supplies and clothing, which will be shipped to the Philippines.

Carmen Martin, president of the Filipino community in Istanbul, who came to Turkey 21 years ago to work as a children’s nanny, says during normal times her organization tries to help solve the problems faced by Filipinos living in Turkey, "but now… many of our friends here have lost houses [at home] and are really suffering," she said.

The generous donations to help survivors of the disaster are typical of Filipinos everywhere. The Filipino community in Istanbul will begin holding a series of garage sales at the St. Esprit Church; all the money raised will be sent to family members of the Istanbul diaspora affected by the typhoon. "One of the behaviours of Filipinos is helping together when there is a problem,” Martin says.

Remittances “are probably one of the primary ways that people are supporting their own family and friends in the Philippines in this time of crisis,” says Terry Valen, organizational director of the San Francisco Filipino Community Centre.

He points out that “remittances primarily benefit the individual family and household, which is important, but it does not address the larger needs for investment and support of infrastructure and development in the Philippines”.

The role of the Filipino diaspora has its limitations and can by no means be a substitute for urgently needed large-scale international support.

On 12 November a humanitarian response plan was launched, seeking $301 million for the United Nations and its humanitarian partners to provide emergency food, shelter, clean water and sanitation, and health services for six months.