Rescuers are struggling to reach those affected by a 7.2 magnitude earthquake in the central Philippine Visayas region. At least 100 people have been killed and nearly 300 injured, say officials.

"We are trying to reach the affected areas, but it’s very difficult. The entire island province of Bohol is without electricity, while telecommunications are spotty," Gwendolyn Pang, secretary-general of the Philippine Red Cross, told IRIN. "Roads are not passable while at least 10 bridges on Bohol have also been damaged."

The military, police as well as civilian volunteers have also deployed rescue teams to Cebu and Bohol provinces, although many areas have yet to be reached, she said.

According to the UN Office for the Coordination of Humanitarian Affairs (OCHA), the quake struck the central Philippines island of Bohol early on 15 October, a little after 8am local time, with authorities tracing the epicentre to near the town of Carmen on Bohol Island, a renowned tourist area.

The quake triggered landslides in several coastal towns in Bohol, where homes were destroyed and communities very badly affected, while in Cebu city, the country's second most important commercial hub, buildings collapsed or were partially damaged, including the Santo Nino Basilica Cathedral (the belfry fell to the ground).

Of the nearly three million people affected, more than 28,000 (5,620 families) are now being assisted in 34 evacuation centres in Bihol, the Department of Social Welfare and Development (DSWD) reported on 16 October.

Families sleep on the road in fear of more aftershocks after a 7.2 magnitude quake in Bohol in the Philippines on 15 October 2013. Close to 3 million people were affected and thousands were displaced 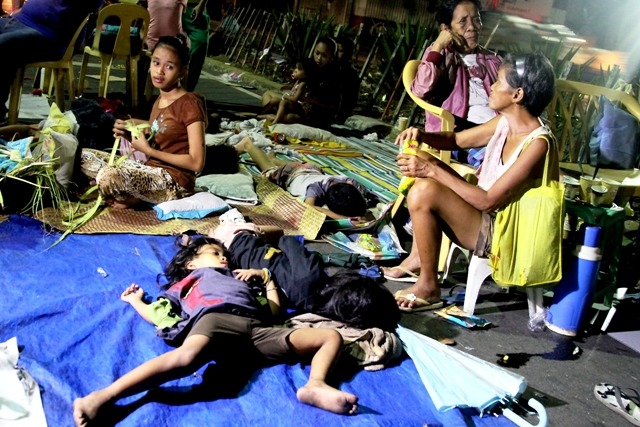 In Cebu, residents pitched tents and preferred to sleep on roads, fearing aftershocks. At least 725 have been recorded thus far, of which 12 were felt, the Philippine Institute of Volcanology and Seismology reported.

In one slum area, children, young mothers and men slept on mats laid out on a stretch of the highway, as community elders distributed porridge.

Newborn babies in cribs, some on intravenous drips, were among hundreds of patients from the Cebu Medical Doctors Hospital taken to a covered basketball court. They joined dozens of others injured in the quake.

Survivor Tonet Flores, from the town of Loon, said all the houses in her community had been destroyed, with many of her neighbours still unaccounted for.

"People are taking the dead to the hospital, but it too is damaged," she said on public radio. "My home has been destroyed and we don't know how to begin rebuilding."

"Rescuers have not been able to reach many towns because of the fallen bridges, and we fear the number of injured and dead could still rise," said Bohol police chief Senior Superintendent Dennis Agustin.

The Philippines sits on the so-called Pacific Rim of Fire. Over the years, the government has struggled to move people away from danger zones, including areas around volcanoes and above active fault lines.

In Manila alone, entire suburban areas have been built on two active faults, and a 2004 government study said a 7.2 magnitude quake could kill more than 50,000 people and destroy or damage more than 500,000 homes.

Chief government seismologist Renato Solidum told reporters in Manila that the energy released in the Bohal quake was equivalent to that of 32 atomic bombs and comparable in strength to the earthquake that struck Haiti in January 2010.

He warned of further aftershocks and possible liquefaction that could cause more landslides.

The last strong quake in Bohol occurred offshore in 1990 with a magnitude of 6.8, causing damage to roads, churches and bridges, and triggering a tsunami, he said.

President Benigno Aquino will visit Cebu and Bohol on 16 October.