Close to half a million residents in Nepal’s mid-western Banke District depend on Bhadra Bahadur Thapa, 58, a government gauge reader, to monitor water levels around the Rapti River basin in Kusum village, some 550km southwest of the capital, Kathmandu.

“My job is to communicate this vital information every hour, or sometimes every minute, depending on the weather,” he said. Thapa routinely receives hundreds of calls from local residents after a heavy rainfall.

The Rapti River is one of 6,000 rivers and streams that traverse this Himalayan nation of 25 million, and is often at risk of flooding during the country’s annual monsoon season from July to October.

When river water reaches warning level - indicated by telemetry readings at observation sites set up in 2008 at various points along the river’s edge and transmitted to Thapa’s office - he immediately communicates this data to key local disaster risk reduction and response teams from the government, army, police and Red Cross, who in turn raise the alarm in local communities.

“Usually, it takes four to five hours for flood waters to reach the nearest village [downstream] from Kusum, so people have sufficient time to leave their homes,” Rishi Sharma, director general of the Department of Hydrology and Meteorology (DHM), told IRIN in Kathmandu.

The DHM comprises 280 rainfall centres, 100 climate centres and 180 hydrology centres, and is the key agency leading the early warning system in Nepal, but it needs upgrading, said Sharma, particularly in the area of warning and providing real-time data.

The World Bank has been supporting the country since June with ‘Building Resilience to Climate Related Hazards’, a programme to strengthen the government's capacity to mitigate climate related hazards by improving the flood forecasts.

The government started stepping up its early warning efforts five years ago with a community based early warning system in 25 places near seven river basins - Karnali, Babai, Narayani, Seti, Rapti, Bagmati and Koshi - across the country, said DHM officials.

A local woman and her children look to the camera in Banke District, one of the seventy-five districts of Nepal. The district is located in the Mid-Western Region and is home to close to 500,000 residents 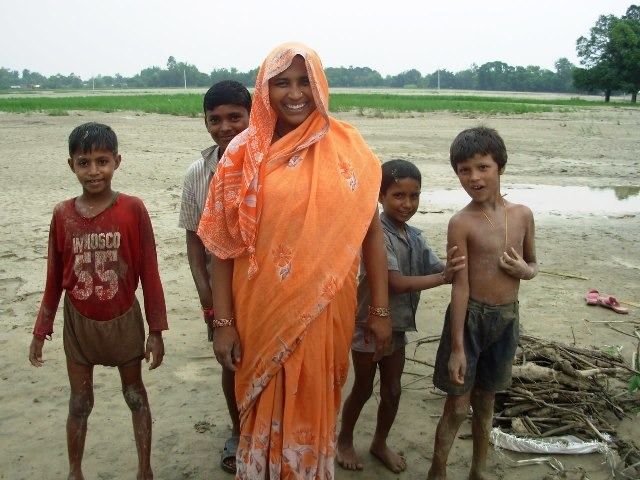 “Much progress has been made in community-based early warning in Nepal. However, we need to make sure that early warning is part of a comprehensive approach for disaster risk reduction at the community level,” disaster management expert Moira Reddick, coordinator of the Nepal Disaster Risk Reduction Consortium (NDRRC) explained.

“This system has worked very effectively and is making vulnerable communities aware and prepared,” Lok Narayan Pokharel, from the NGO, Centre for Social Development and Research Nepal (CSDR), told IRIN in Banke district. CSDR is the key agency working with the government on the early warning system.
Making a difference

“We don’t have to stay awake all night and panic when it rains, as the communication system is better now,” 30-year old Laxmi Dixit, a recent flood victim from the remote Tepari village in the Holiya Village Development Committee area, nearly 600km southwest of Kathmandu, said.

Dixit’s was among 112 families relocated by the government after they were displaced from their village by flooding in July. Since then, they have all been living in Naya Busty, a safer village about 5km away from the Rapti River.

However, local authorities say the early warning system has to go beyond just warning the villagers.

“Early warning is not just about… [raising an alarm in good time among] people, but also to guide them for [better] preparedness in future by building strong infrastructure like river embankments, and having enough resources to reduce risks,” said Banke’s chief district officer, Jeevan Prasad Oli.

According to the NDRRC, Nepal loses an average of two lives a day due to natural disasters, including floods, landslides, drought, hail, avalanches, glacial lake floods and earthquakes.