Sri Lanka says it will prioritize the repatriation of thousands of Tamil refugees in India next year, more than four years after the 1983-2009 civil war.

“In 2014, the government will introduce a repatriation programme because Sri Lankan refugees living in [the Indian state of] Tamil Nadu will be our next priority,” Minister of Resettlement Gunaratne Weerakoon told IRIN.

According to Indian government figures, there are more than 100,000 ethnic Tamil Sri Lankans in the southern Indian state of Tamil Nadu, including 68,000 in 112 government-run camps and 32,000 outside the camps.

Slated to begin in early 2014, thousands of refugees in India will be assisted to return to their places of origin voluntarily, said Weerakoon.

“We are working on the details. The repatriation grant details are [still] being worked out. They will receive special assistance if they [the returnees] are without homes and lands. Their needs relating to documents such as deeds and identification forms will be addressed as priority needs,” he said.

In the first year, the government intends to facilitate up to 10,000-15,000 returnees, he said, with preliminary plans, if the process is successful, for another 50,000 returns the following year.

“We will make it a worthwhile homecoming. This means having their villages secure, infrastructure in place, `set-up’ grants available, documents provided and assistance to resettle easily,” the minister said.

Weerakoon pointed out that the government had prioritized the resettlement of internally displaced persons (IDPs) for three years (over 460,000 have returned to their places of origin, according to government figures) and was ready to move on.

The last big repatriation effort was in 2002, following a formal, but fragile ceasefire between the government and the Tamil Tigers in which more than 9,000 people returned in a 14-month period. 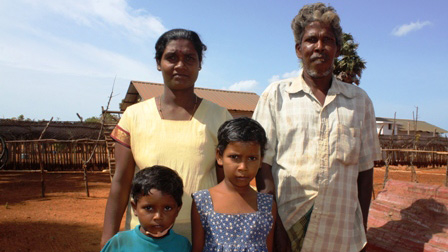 Most Tamil refugees in India are reluctant to return. Many outside the camps have put down roots in India, and others have other reservations or fears.

Since the end of the conflict in May 2009, the UN Refugee Agency (UNHCR) has assisted more than 5,000 refugees to voluntarily return - mostly to Mannar, Vavuniya and Jaffna districts in the north and Trincomalee in the east, with smaller numbers returning to Kilinochchi, Mullaitivu, Batticaloa, Colombo, Puttalam, Nuwara Eliya and Kandy.

Estimates suggest around 1,200 could return in 2013; 357 returned between January and June.

On arrival at the airport in Colombo, UNHCR provides a reintegration grant of 12,000 Sri Lankan rupees (US$91) for each adult and 9,000 ($68) for each child. Another 4,000 ($30) is paid as a travel allowance; and each family can receive a package of non-food supplies after contacting the UNHCR office nearest to their place of origin.

According to UNHCR, lack of direct access to the camps in Tamil Nadu is affecting the agency’s efforts to support voluntary repatriation. It conducts repatriation interviews outside the camps, while relying on civil-society groups to monitor the situation within them.