“The response of local governments to IDP [internally displaced persons] needs has been too little and too slow,” Eman Embu of Caritas Maumere, a local arm of international NGO Caritas Australia which is providing aid to those affected, told IRIN.

Mount Rokatenda on the island of Palue, about 15km north of Flores island in East Nusa Tenggara Province, has erupted twice since October 2012, according to the National Disaster Mitigation Agency (BNPB).

To date, 3,555 people have been displaced - 2,754 after the first eruption and 801 on 12 August. The second eruption killed at least five people, local media reported.

The IDPs are currently in the districts of Ende and Sikka on the northern coast of Flores.

Local authorities plan to relocate the displaced to other areas in the two districts, but NGOs say current needs at the 20 IDP sites are not being met.

However, relations between host communities and IDPs on Flores have deteriorated, with the former taking food aid intended for the latter, according to HFI representative Hening Purwati.

More latrines in the camps were also needed, she added.

Deputy head of emergency response at BNPB Dody Ruswandi said he would ask the Public Works Ministry to take action, noting that BNPB had already provided Rp 700 million (US$68,109) to local government for IDP needs, with Rp 200 million ($19,459) earmarked for September.

“The BNPB is cooperating with local NGOs and local religious leaders to help the local governments help the IDPs,” said Ruswandi. “We’re in regular contact with the HFI, as well as the leaders of both districts. We’ve also said to the NGOs that if they need funding from us, let us know.”

HFI says most IDPs agree to relocation, provided they are guaranteed houses, land ownership and livelihoods. But HFI’s Purwati said IDPs were still waiting for the relocation, unsure that such guarantees would be honoured.

BNPB’s Ruswandi said IDPs would definitely get these things which, he said, were “requirements” of their relocation.

BNPB has allocated Rp 13 billion ($1.25 million) for IDP housing needs. The Public Works Ministry is due to provide water and sanitation systems for the new housing.

Meanwhile, with the funds yet to disbursed, other concerns have emerged.

“The Ende government will insert the IDPs into existing villages, which is good as IDPs will be more integrated with existing residents… But in Sikka, IDPs will be relocated en masse to three locations, increasing the potential for conflict with other villages through resource competition,” Purwati said.

“The land earmarked for relocation in Sikka is also steep and rocky, and IDPs say they don’t want to be relocated there.”

Ruswandi acknowledged these concerns, saying the process was complex.

“We’re not just moving people, but the livelihoods of people,” he said. “We must approve the relocation with community leaders to ensure the IDPs won’t encounter any problems with existing residents.”

The main livelihoods are farming, fishing and weaving.

IDPs at a camp in Ende District. More than 3,000 people were displaced when Mount Rokatenda on the island of Palue erupted in October 2012 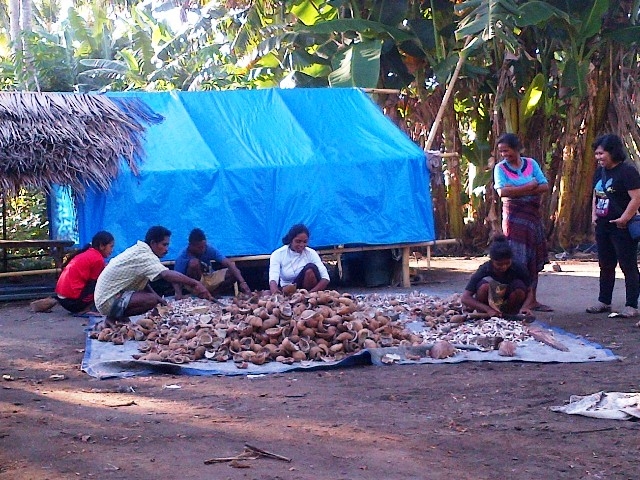 Ruswandi said the relocation delay was because the local government was negotiating for land belonging to community leaders.

Sikka also held district elections in February and April which had sapped local government resources, Ruswandi explained, adding that a new district head had been installed in July.

Decentralization, which since 1999 has seen powers transferred to local governments to run basic services, had also slowed the response, he said.

District governments in Ende and Sikka lacked the staff and resources to respond quickly to IDP needs, he added.

Indonesia, an archipelago nation of more than 17,000 islands and some 240 million inhabitants, has over 150 active volcanoes.