Read about what we achieved.
DILI

More work is needed to improve nutritional behaviour in Timor Leste, where 58 percent of children under five are stunted (too short for their age) due to chronic malnourishment, experts say.

“The focus needs to be on behavioural change. Simply increasing the quantity of food will not improve people’s nutritional status if this food source, such as rice, has limited nutritional value,” Mirko Gamez Arias, a programme manager at CARE, told IRIN.

“It is not always simply a case of whether people have access to enough food, but often more a question as to whether the quality of food consumed is sufficient to prevent malnutrition. Many people’s diet consists of little more than the basic staples,” said Alberto Mendes, country director for the World Food Programme (WFP).

According to a 2013 report by the UN Children’s Fund (UNICEF) Timor-Leste has the highest percentage of children under five who are moderately or severely stunted in the world, matched only by Burundi. The report does not contain figures for Afghanistan and Yemen, where equally high rates of stunting among children were previously reported.

Stunting reflects chronic undernutrition during the most critical periods of growth and development in early life.

Globally, undernutrition contributes to more than one third of child deaths. In Timor-Leste (population 1.1 million), the number of underweight children has increased from 41 percent in 2002 to 45 percent in 2009-10, the report said.

“The situation remains very critical in Timor-Leste as stunting has a massive impact on both physical and mental development, which mostly cannot be reversed after a child reaches the age of two. This can have long-term negative impacts on a country's economic and social development when its children cannot reach their potential due to poor nutrition,” said Geoffrey Keele, UNICEF regional communication specialist in Asia.

According to the UN, contributing factors to the high rates of malnutrition in the small half-island country include inadequate child feeding practices, limited health services, poor hygiene practices and a lack of healthcare infrastructure.

“A focus on addressing the socio-cultural issues around malnutrition and on behaviour change communication in Timor-Leste needs to be strengthened as socio-cultural behaviour leads to improper feeding practice and care for children and women,” UNICEF country representative in Dili Hongwei Gao told IRIN.

The government is working to address long-term chronic malnutrition rates, notably through the ongoing implementation of the National Nutrition Strategy, revised in 2012.

While the strategy has been in place since 2004, only in 2008 did the country develop nutrition interventions to assist in both screening for malnutrition and to bolster behavioural change.

Specialized nutritious foods are provided to vulnerable women and children, supported by WFP. However, to assist in changing behaviour, information is also provided to communities on cooking methods, good hygiene practices, and how to prepare a balanced, sufficient diet.

A local food market in Dili. Many children in their early years are not getting the nutritious foods they need 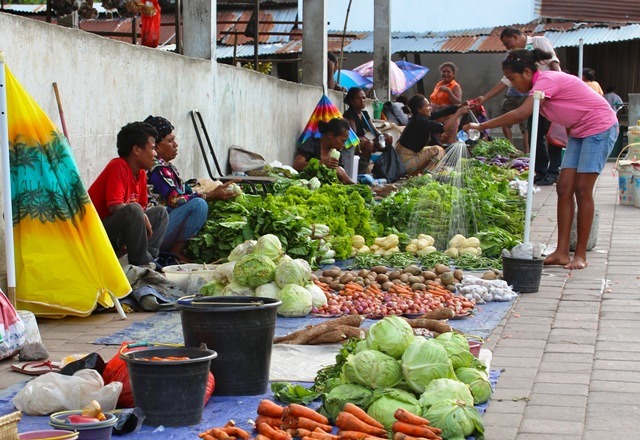 HIAM Health, a national NGO in Dili, works on education and support programmes together with Dili National Hospital to address the malnutrition of children referred by hospitals.

“Often the families are here because of a lack of knowledge about nutrition, and not due to poverty,” said Hiam Health’s organization capacity builder, Jill Hillary. “These skills that the parents learn can be passed on to community members when they return home and mostly the children recover.”

Rice, cassava and corn form the basis of most children’s diets when families are unable to afford meat, eggs or dairy.

Meanwhile, health workers note the need for a greater awareness of the importance of proper childcare and feeding practices.

Although the World Health Organization (WHO), recommends exclusive breastfeeding during the first six months of life, the latest Timorese Democratic and Health Survey (2009-10) revealed the rate to be only 52 percent.

“As nutrition is a complex issue, Timor-Leste would benefit from a more multi-sector approach to addressing the problem which integrates health, nutrition and behaviour change actions,” said WFP’s Mendes.